I Hate Treadmills, But I’m Obsessed With Treadmill Classes

How one lifelong outdoor runner learned to love the dreadmill. 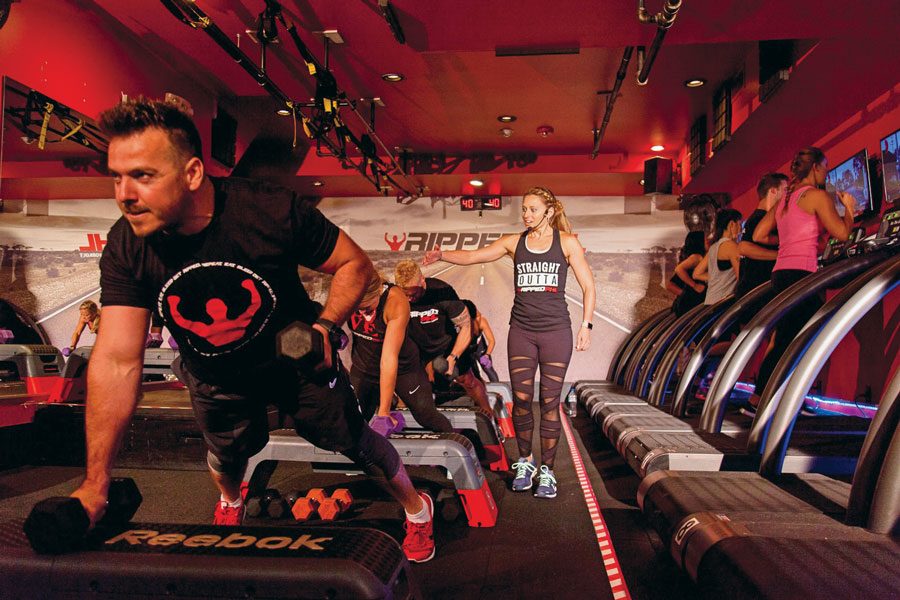 My arms are pumping. My feet are pounding. The room is dark, with strategically placed spotlights creating a dramatic contrast. Just as my body starts demanding I quit, the beat drops in the blaring surround-sound music, and the instructor shouts into the mic: “Keep going!” I pick up the pace.

I last for 15 seconds longer, then hop my feet to either side of the revolving belt, gasping for air. Next we’re headed to the floor, where we scoop up kettlebells for sumo squats and dumbbells for overhead presses. A few minutes later, it’s back to the treads. The instructions change every 30 seconds, and we’re picking up speed as the incline lowers.

I’m running faster than I ever do on my solo runs, and yet … I’m on a treadmill? Believe me, no one is more surprised than me that I’m on one of these terrible machines and — gasp — enjoying it.

I don’t have to explain to you why I hate the treadmill, because it’s for all the same reasons you do. When you get on a treadmill, your only goal is getting off again. Like most sane people, I’d rather run endless circles on the tiniest track (done that) or trudge through slush and snow in single-digit weather (done that, too) than skip along a moving belt to nowhere, maybe hell.

But while I may hate those damned machines, I’ve recently become confoundingly obsessed with treadmill classes — and I’m not alone. Whereas running on a regular treadmill has to be completely self-motivated, classes provide a group mentality and a competitive component — and a total lack of monotony.

These workouts are gaining in popularity. In an annual report, ClassPass identified an 82 percent increase in workouts that incorporated treadmills from 2017 to 2018 across the United States. And Philly — home of the largest 10-mile road race in the country, a Rocky Run and a marathon, plus more than 50 outdoor running groups — is hardly immune.

Philly’s treadmill studios are multiplying. Unite Fitness has opened two locations. In 2018, Orangetheory expanded to NoLibs, while RippedPHL added a second studio in Cherry Hill. And in 2019, as EverybodyFights opened in Rittenhouse, Barry’s Bootcamp announced a location that just opened there, too.

While critics will say the boutique fitness industry is just providing new ways to pay for stuff that can be free (like, um, running), it’s also managed to turn a boring exercise into fun. After all, the club-like settings — dark rooms, moody lighting, blasting EDM — make it easy to forget you’re indoors on one of those torture devices you hate.

And there’s another reason they’re so popular: These classes offer incredibly efficient workouts. High-intensity intervals have long been shown to be one of the best uses of our limited gym time, and these workouts not only include HIIT intervals and lung-burning cardio; they also incorporate strength training.

So yeah, I’ve more than come around on tread classes. But will you ever catch me on the treadmill at a regular gym instead of running on Kelly Drive? Over my dead body.

Published as “Going Nowhere Fast” in the November 2019 issue of Philadelphia magazine.