I Quit Fad Dieting and Lost 50 Pounds in 11 Months 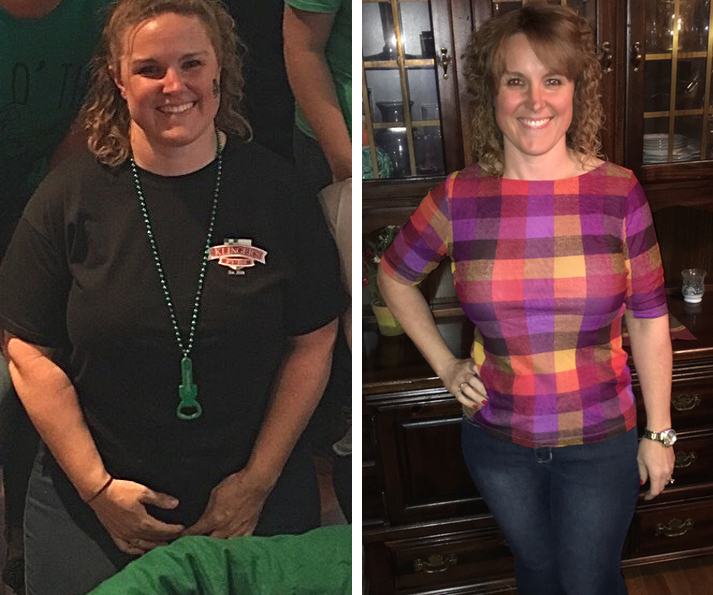 Why I wanted to change:  “I’ve struggled with my weight for many, many years (mainly since having my second son — he’s 13). I tried, but couldn’t really kick the last of the baby weight I put on. I’d always been around 130 to 135 pounds (I’m 5’4”) but after having him I seemed stuck at 150. I remember starting a new job in April 2010, weighing 155 pounds, wanting to lose weight and trying all kinds of tricks to do so — Body for Life, Atkins, South Beach, 21 Day fix, and so on and so on. After multiple failures, I believed the only way to lose weight was by eating a starvation diet of egg whites, plain chicken breasts, and broccoli — something I simply could not stick to, but I continued to try anyway out of desperation. In the summer of 2016 I was up to 191 pounds. I saw a story about Dr. Charlie Seltzer and one of his clients, Jessica, on the news and thought, Wow! Lose weight, no starving, just small changes…I can do that!

“I scheduled my first appointment. Shortly after, however, some family issues arose and I decided it wasn’t a good time, so I cancelled that appointment. By the end of February 2017, I had worked through those family issues and, while doing so, put on another 13 pounds. I was 204 pounds, clinically obese, and mortified! I was constantly tired, constantly frustrated, and terribly worried about my health risks due to my weight. I hated not being able to participate for long in physical games with my kids. I hated how I had to keep buying bigger clothes and how, when I sat in the seat of an airplane, my body extended beyond the borders of my seat. I didn’t like the way I looked or felt and needed to take control of my weight!”

How long it took: “I first met with Charlie at the beginning of March 2017 and have been working with him since.”

What all changed: “I am definitely happier and have a more positive self-image. I  have more energy and am not as tired all the time — partly due to Charlie’s treatment approach. He doesn’t just work on weight loss, he treats you as a whole person. In doing so he uncovered that I have Hashimoto’s Thyroiditis and is treating me for hypothyroidism related to it. I no longer believe that you have to starve or avoid the foods you enjoy in order to lose weight, and I try to convince others of the same. I do more with my kids and have more enthusiasm for life. I look at food more as necessary for life and less of something meant as enjoyment (although I do still like to indulge in yummy treats).”

What’s left to change: “I am still working to change and think I always will in some shape or form. My goal weight is 130-135, so I have roughly 20 pounds to go. That’s sometimes still hard to believe! I also have a long way to go with my fitness goals —weight is only part of that formula. I want to be stronger. I want to be faster. I want to increase my flexibility. I also see mindfulness as part of health, so that’s one of my goals too.”

How I changed my diet: “I remember my first two weeks of tracking all my food; Charlie told me to eat the way I usually eat and not change a thing — he just wanted me to get into the habit of tracking. When I look at those two weeks…WOW! I averaged between 2,000 and 3,000 calories a day, sometimes more! I ate a lot of burgers, fries, pizza, and wings. One of my lunches during those two weeks totaled over 1,800 calories all by itself! Don’t get me wrong, I still get to eat all of those things — I just don’t do it as frequently or eat as much of it. I’ve switched to turkey burgers; in fact, I use ground turkey in everything that calls for ground beef now. I shy away from pastas, especially the ones with creamy sauce. I look more to low-calorie flavor additions such as salsa, hot sauce, and spices instead of cheese or creamy sauces. I’m still not great at adding fruits and vegetables throughout the day, so I’m working on that right now.”

“You can have cake and pizza and wings if you want — if you don’t believe me, I’ll show you my food journals!”

How I changed my workout routine: “Charlie started me on four-minute Tabatas three times a week, as well as five simple weight-lifting exercises (leg press, bench press, deadlifts, shoulder press, and row) 3 sets of each, three times a week. Unfortunately I’ve had a string of issues ( foot surgery, back pain) that have kept me from exercising for many months now, so I currently don’t have an exercise routine. I’m looking into yoga (never done it before), and am hoping to be cleared to go back to the routine Charlie recommended after I see a physiatrist for my back pain later this month. I see what I have accomplished in the absence of exercise and am proud but imagine what I could be and do with regular exercise — stronger, leaner, faster metabolism. I actually WANT to exercise.”

The hardest part: “I had hit what I believed to be a bit of a wall in mid-January and was stuck around 155 pounds. A lot of it was my fault as I’d started some old habits of emotional eating. I was going over my calorie limit for the day (which, by the way, is currently 1500-1600 calories per day!) and I wasn’t tracking it because I was ashamed, but I continued to eat anyway. I was honest with Charlie and told him about it on our call earlier this month. He didn’t chastise me or make me feel bad in any way. Instead, he told me simply to track it all and that the only thing I should feel bad about is NOT tracking it all. The simple step of tracking it was all I needed to get back in the game. I still sometimes eat more than my calorie allotment for the day, but not nearly as much as before, and I track it all. And I’m losing weight again!”

What I want you to know: “You DON’T have to starve or avoid the foods you love to lose weight! You can have cake and pizza and wings if you want — if you don’t believe me, I’ll show you my food journals!”