The hero of his comic Believers is a Black, gay stoner man of size. 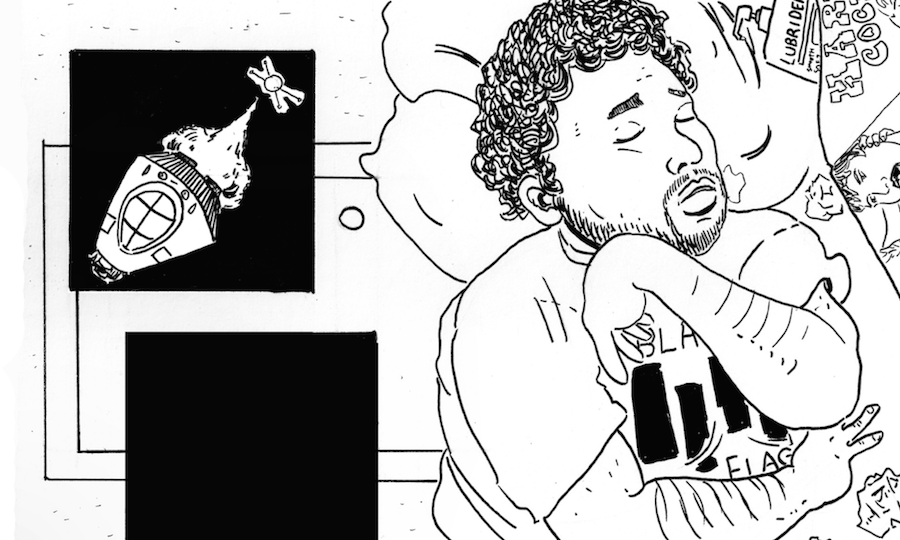 West Philly’s Alex Smith is a man of many talents. I first encountered him at City Paper where I edited and assigned his pieces on arts and music. Then I realized he was everywhere: writing fiction (alone and with his collective of likeminded visionaries in Metropolarity), making comics, playing music (in Solarized) and more. When I finally read his NSFW sci-fi adventure comic Believers — and heard Metropolarity was up for an award — it seemed like a good excuse to get inside his head.

Believers is a fast-paced and funny action comic. Do you dream of continuing the adventures of Oscar?

Thanks, I like to keep storytelling light but the stakes relatively high. I would love to continue Oscar’s adventures, however my collaborator Jacob Mazer who runs Animal Kingdom is a pretty busy person! It would mostly depend on him because I could not imagine anyone else at this time drawing Oscar, although you never know. Oscar is one of my favorite characters I’ve created because there’s such a vast amount of weird stuff I can pull from in my own life to project onto the page, as well as so many rich possibilities with pulling him into a universe of kooky demigods and space aliens he knows nothing about.

Believers isn’t like most comics — starting with its gay Black stoner main character. Do you see comics culture in general becoming more accepting of new voices and perspectives?

Oscar is also a man of size, another criminally under represented group on the comics page.

But, If you’d asked me this six months ago, I would have said a very fiery “no!” But honestly, this exact moment is the absolutely best time I’ve experienced as a fan of the comics medium as far as diversity of characters, of voices behind the pen, and just in general better storytelling! It’s amazing, I left the comic store today and for the first time since I started collecting in the late ’80s, I walked out with less books in hand than what I wanted to buy; I just couldn’t afford to buy all the books I wanted to read. 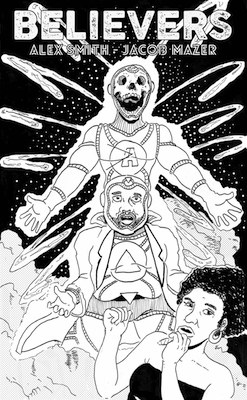 The new and diverse voices in comics are changing the landscape to look like the world we live in, that’s why there’s Muslim characters like Ms. Marvel and black girls like Riri/Iron Man and Moon Girl are the smartest in the Marvel Universe, there’s Ms. America Chavez who’s written by a Latina queer woman named Gabby Rivera, who is just this amazing, cosmic Latina super-hero. Indies are burgeoning as well, there’s a transgender super-hero in the book Alters from Aftershock.

That said, there can certainly be more. It is still staggeringly hard for people of color, particularly Black people to get jobs at Marvel and DC because we’ve spent decades standing outside the gates wanting a chance. Many of us don’t have an inside track on these companies who still rely on their “old boy networks.” Those companies need to work harder to truly diversify their ranks. But for the first time in a long time, I actually have hope that these things are going to start happening.

I saw that Style of Attack is up for a Lambda Literary Award. Tell me about the book. And how do you rate your chances of winning a Lammy?

Style of Attack is a compilation of stories, art, essays, and sci-fi/science experiments complied by the arts/activist group I’m a part of, Metropolarity. We’re a buncha queer black and brown nerds who got together because we wanted to create a more ethereal, sustainable vision for revolution in the coming dystopia. The book has that pulpy, throw this in your back pocket/let it rule your life kind of vibe. It was wild that we got nominated. I actually think our chances of winning are good, there’s some tough competition in our category but we offer something wildly different, intrinsically queer, and a voice that hasn’t been heard or articulated in this way before. We shall see.

You work in a lot of mediums — comics, fiction, journalism, music — does one of them rise above the rest for you?

Not really! Sometimes I wish I could focus on just one thing and perhaps I’d be rich and famous by now? But I’ve long learned to live with myself in that regard. Like, I am always coming up with new ideas and new ways to express those ideas. I even dabble in fashion, event curating, DJ-ing, filmmaking.
The key lately has been to take my time, to not rush things and to trust the universe with some of this stuff. Like the Lambda Award was kind of out of the blue, but it was also out of my hands after the work itself was done.

When I started Laser Life (queer sci-fi reading series), I told myself that I wouldn’t care if five people showed up. Fifty came and it was awesome, but relieving myself of the pressure to produce and to be the next superstar has actually helped my work tremendously, has actually helped me produce more than I ever have in the past, and all interesting, quality work.
All that said, if I could narrow down my entire hopes and dreams into one singular dream project, it would be to write for DC Comics.

Above all else, I’d love to get my hands on some of the lesser known entities there, Legion of Super-Heroes, Doom Patrol, Infinity Inc. — those comics are the biggest influences on my writing style, it would be fantastic to write the characters that inspired so many of my own.