From Scrooge to Sugar Plums: Holiday Performances in and Around Philly

Nutcrackers, fairytales, Muppets ... this season has it all. 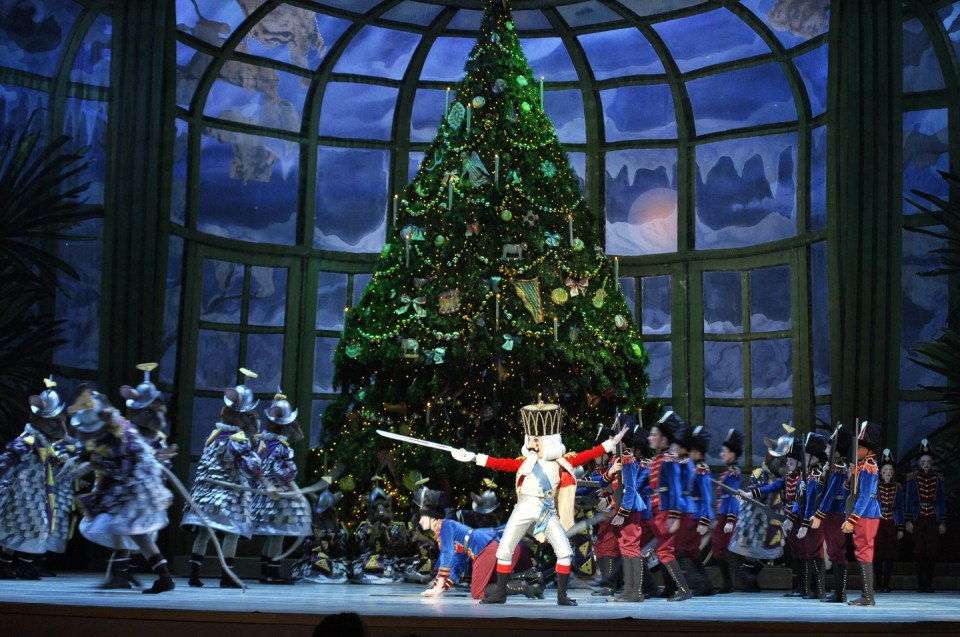 The Nutcracker is always top of our must-do holiday performances list in Philly / Photograph by B. Krist for Visit Philadelphia

Whether you’re planning a family outing over winter break or a twist on nostalgic tradition, the holidays always bring the heavy hitters to the stage. All imaginable variations of The Nutcracker, a handful of Julie Andrews-adjacent plays, Scrooge realizing he’s a miserly jerkface … they’re all coming to a theater near you, so get those tickets and enjoy the show.

The Sound of Music
Media Theatre stages one of the most beloved musicals ever, with classics like “Do Re Mi,” “Climb Ev’ry Mountain,” and “My Favorite Things.” Catch the Rodgers and Hammerstein classic through early January.
November 16th-January 8th, Media Theatre, 104 East State Street, Media.

Rodgers and Hammerstein’s Cinderella
Even more Rodgers and Hammerstein! Kids and adults alike will be swept away in the fairy tale with classic songs like “In My Own Little Corner” and “Impossible.” (Even though my fellow ‘90s kids know nothing will ever beat Brandy and Whitney.)
November 22nd-December 31st, Walnut Street Theatre, 825 Walnut Street.

Alice in Wonderland: A Musical Panto
People’s Light always stages an elaborate, comical and fun-for-all-ages panto for the holidays, and this year they’re really bringing it. “With origins dating back to commedia dell’arte, the ‘pantomime’ takes a well-known children’s story and turns it on its ear,” they explain. New for this year, it’s Alice in Wonderland, full of jokes and songs, and led by the wonderful drag performer Eric Jaffe as the Cheshire Cat. Best for ages five and up.
November 16th-January 1st, People’s Light, 39 Conestoga Road, Malvern. 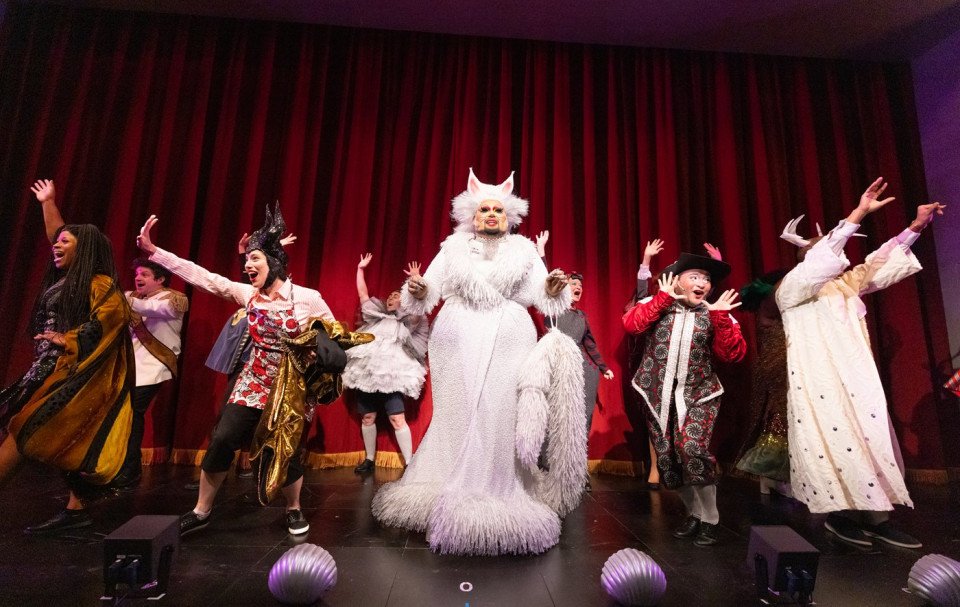 A Christmas Carol
If two actors still sounded like too many, Lantern Theater Company’s dramatic retelling of A Christmas Carol is accomplished by just one actor. Anthony Lawton returns to bring the story to life, playing each character in the span of 95 minutes. Best for ages nine and up.
December 3rd-28th, Drake Theatre, 302 South Hicks Street.

The Butterfingers Angel
The full name of this William Gibson-penned play is The Butterfingers Angel, Mary & Joseph, Herod The Nut, and The Slaughter Of 12 Hit Carols In A Pear Tree, and it presents a funny and imaginative retelling of the Nativity story from a fresh and irreverent perspective.
November 30th-December 23rd, Uptown! Knauer Performing Arts Center, 226 North High Street, West Chester.

Charlotte’s Web
Arden Children’s Theatre apparently wants to make all the kids cry this holiday season with the heartwarming and heartbreaking story of a special friendship between a pig and a spider. I’m still not over it. Seriously, though, the E.B. White book remains a childhood classic for a reason. The show runs for 90 minutes with one intermission.
December 7th-January 29th, Arden Theatre, 40 North 2nd Street. 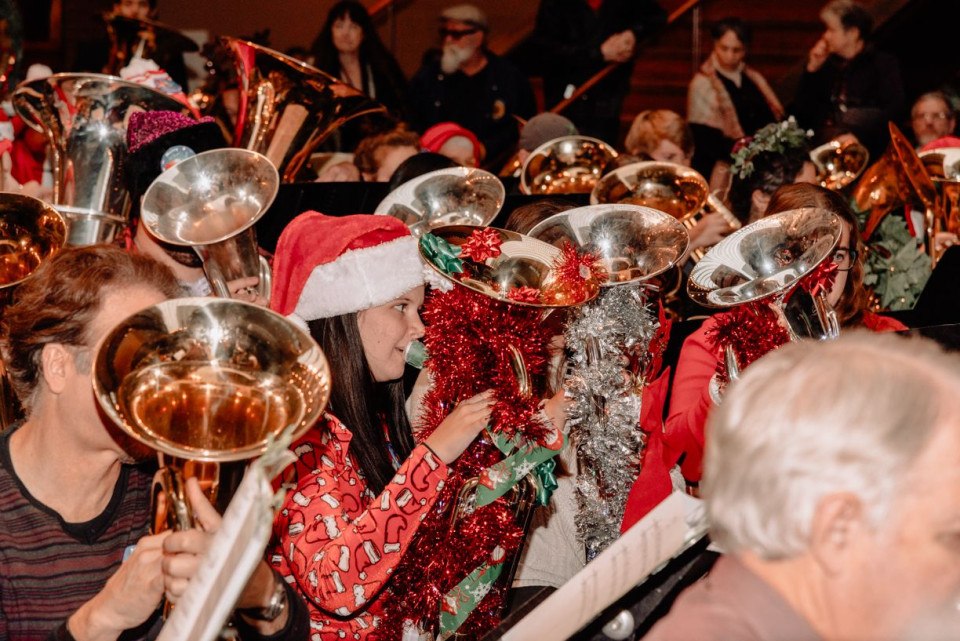 A Philly POPS Christmas: Spectacular Sounds of the Season
This beloved Philly tradition is sadly coming to an end, as the POPS announced they were shutting down after their popular holiday concerts this year. So if you’ve always wanted to go, seize your moment. The spectacle features over 300 performers, including The Philly POPS Festival Chorus, The Philadelphia Boys Choir, the African Episcopal Church of St. Thomas Gospel Choir, Hamilton star Mandy Gonzalez, Broadway star Jordan Donica, and Santa himself.
December 3rd-17th, Kimmel Center, 300 South Broad Street.

The Harlem Nutcracker
The Philly POPS Jazz Orchestra of Philadelphia performs the jazz-infused take on the Tchaikovsky suite that Duke Ellington and Billy Strayhorn famously premiered in 1960. In the second half of the program, the Jazz Orchestra of Philadelphia’s presents a tribute to the late Philadelphia native and jazz piano legend McCoy Tyner. The set will highlight eight of Tyner’s compositions and will feature guest pianists Bruce Barth and Cyrus Chestnut.
December 4th, 2 p.m. and 7 p.m., World Cafe Live, 3025 Walnut Street.

Tuba Christmas
Have a tuba? Bring your tuba! All are invited to these free performances of holiday classics by over 100 tuba players — and if you want that to include you, email Jay Krush at krushtuba@gmail.com. This annual tradition takes place in the Kimmel Center’s lobby and it’s just delightful (if you like tuba music, that is.)
December 11th, noon and 6 p.m., Kimmel Center, 300 South Broad Street.

A Soulful Christmas
Led by creator and director J. Donald Dumpson, this uplifting performance of holiday spirituals and gospel favorites unites choirs and performers from churches and organizations across the region. Now in its ninth year, the program closes with an inspiring “Finale of Lights.”
December 13th, 7:30 p.m., Kimmel Center, 300 South Broad Street.

David Broza’s Not Exactly Xmas Show
Israeli singer-songwriter David Broza has been doing his holiday show for going on 27 years, featuring his Cuban band along with some special guests. “One of the longest-running holiday shows in NYC, people from around the country and the world come to experience Broza’s exhilarating, energetic and moving performance, enhanced with vibrant storytelling.”
December 20th, 8 p.m., City Winery, 990 Filbert Street.

The Philadelphia Orchestra’s The Glorious Sound of Christmas
Did you know that the orchestra’s The Glorious Sound of Christmas was first recorded in 1962? Sixty years later, it’s still a grand tradition, with holiday selections everyone will recognize, from age-old carols to The Nutcracker — plus a more recent addition: “The Rittenhouse Carol” by Bramwell Tovey.
December 21st-23rd, Kimmel Center, 300 South Broad Street.

Dance (or, Just a Whole Lot of The Nutcracker) 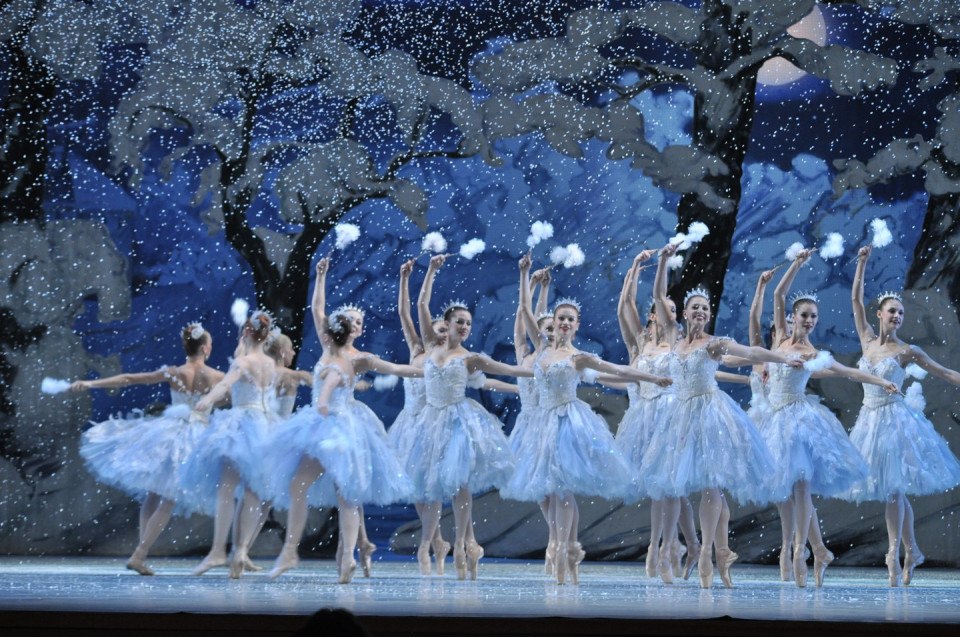 The snowflake fairies in George Balanchine’s The Nutcracker / Photograph by B. Krist for Visit Philadelphia

George Balanchine’s The Nutcracker
The ultimate classic. From the Tchaikovsky score to the fantastical journey to the Land of Sweets and back, this ballet never really changes, and never really has to. Come early for a pre-show picture with the Mouse King to really make your holiday season complete — or book Tea with the Sugar Plum Fairy on December 18th for some extra sweetness.
December 9th-28th, Academy of Music, 240 South Broad Street.

The Tapcracker
The Lady Hoofers’ all-tap adaptation of the holiday classic includes music by both Tchaikovsky and Duke Ellington, and transports audiences to Paris, where “an infestation of rats has thrown the city into chaos.” The family-friendly performance is a lively 90 minutes, and lots of fun.
December 10th and 11th, Suzanne Roberts Theatre, 480 South Broad Street.

The Nutcracker Dipped in Chocolate
For its second year, the Chocolate Ballerina Company stages its all-Black version of the holiday classic, with a twist. The music will blend Tchaikovsky’s score with influences from hip-hop, Brazilian Carnival and Egypt.
December 17th and 18th, 7 p.m., Mandell Theater, 3220 Chestnut Street.

One-Man Nutcracker
The show’s name and description is self-explanatory: “You know the Nutcracker the ballet, but what if the ballet was performed by only one man?” Well, that one man is Chris Davis, and he’s here to dance it all, from Marie to the mice to the Sugar Plum Fairy, all in an hour. I know I’m intrigued!
December 20th-January 2nd, Theatre Exile, 1340 South 13th Street. 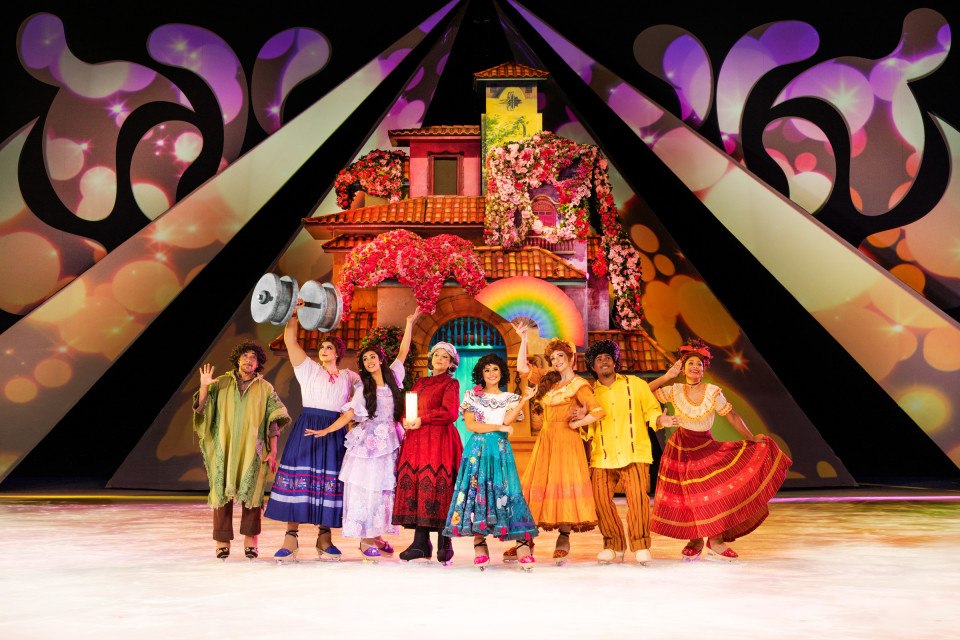 The Muppet Christmas Carol in Concert
The Philadelphia Orchestra plays the memorable score as the Muppets’ take on the Charles Dickens classic plays on the big screen. Side note: When I was little, Statler and Waldorf singing “Marley and Marley” terrified me, and I haven’t watched the movie since, despite loving the Muppets. Maybe it’s finally my year to make peace with those felt ghosts.
December 17th and 18th, Kimmel Center, 300 South Broad Street.

Disney on Ice
You know the drill, parents: Get the kids out of the house and in their most glittery princess costumes for a couple hours of figure skating set to their favorite Disney movie soundtracks. This year, Encanto joins the lineup, so feel free to sing along to “We Don’t Talk About Bruno” because, be honest, you know all the words. Also, Frozen, because Disney knows where its bread is buttered. Buy the $30 light-up wands and commemorative cups while you’re at it.
December 25th-31st, Wells Fargo Center, 3601 South Broad Street.

Blue Man Group
“The men are still blue but the rest is all new!” promises Kimmel Cultural Campus, and I don’t really know what that means, but I do know that the show still includes their signature drumming, absurdity, audience interaction, and custom-made instruments. It’s fun; don’t think about it too hard.
December 27th-31st, Miller Theater, 250 South Broad Street.