The Best Places to See Holiday Lights Around Philadelphia

Get festive with the most magical, twinkly-light-filled spots around town. 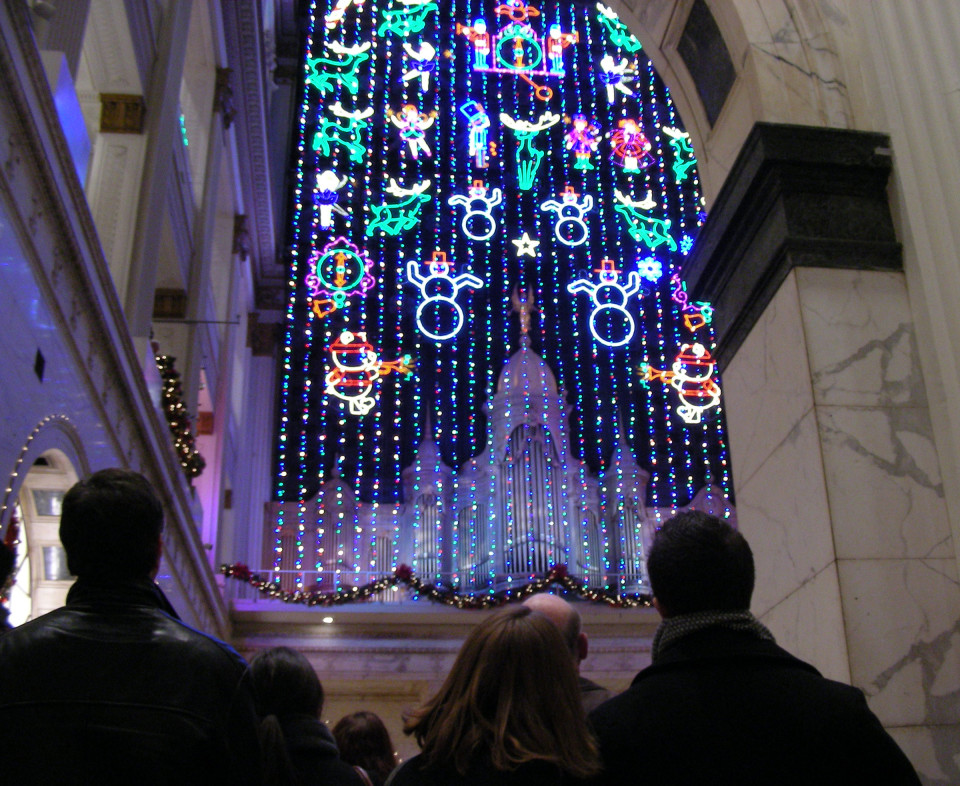 The holidays in Philly bring lots of sparkle, with traditions both old and new. Holiday lights start in November, so you’ve got time to see them all — and you can, with help from our guide.

To quote Julie Andrews’s narration of this 100,000-light spectacle, the Macy’s Christmas Light Show is a “grand tradition.” If you’re from Philly, you probably grew up watching it, and not a thing has changed (other than its original Wanamaker name). The bears, the dancing snowmen, the “magic Christmas tree,” the majestic organ finale — it’s all there, and it’s all aglow in colorful nostalgia. This year, the show runs daily — twice on weekdays at 4 p.m. and 6 p.m., and every two hours on weekends, beginning at 10 a.m. (This cuts down on the life hack Philly parents with small children know: It’s much less crowded during the workday. But you can still take advantage on Friday mornings.) While you’re there, head upstairs to Dickens Village to walk through an animatronic telling of A Christmas Carol. Note that this year, online reservations are required to visit Dickens Village and Santa, so this will take a little more planning than in the past. Worth it.
Free; November 25th-December 31st (Monday-Thursday: 4 p.m. and 6 p.m.; Friday-Sunday: 10 a.m., noon, 2 p.m., 4 p.m. and 6 p.m.; Christmas Eve: 10 a.m., noon and 2 p.m.), Macy’s, 1300 Market Street. 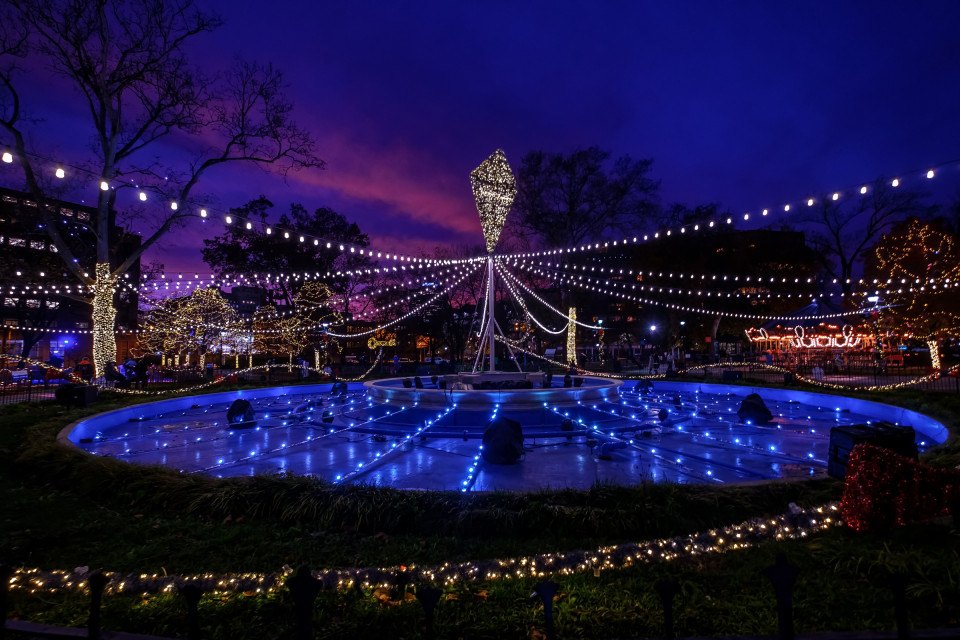 Every night through February 26th, more than 200,000 lights will shine throughout Franklin Square. Through January 8th, the lights will dance, synchronized to a soundtrack of holiday classics (“All I Want for Christmas is You,” selections from The Nutcracker, plus some songs performed by the Philly POPS). There are two alternating shows every 30 minutes beginning at 5 p.m. daily and running throughout the night’s activities until 9 p.m. If you stick around, you can catch them both. (Beginning on January 10th, the holiday soundtrack will be replaced by Johnny Mathis’s “Winter Wonderland” for each show through February 26th.) While you’re there, take a spin on the carousel, warm up by outdoor fire pits with a boozy hot cocoa, and play Chilly Philly Mini Golf with (even more) lights, holiday music and friendly animal decorations.
Free; November 16th-February 26th (daily, every 30 minutes from 5-9 p.m.), Franklin Square, 6th and Race streets. 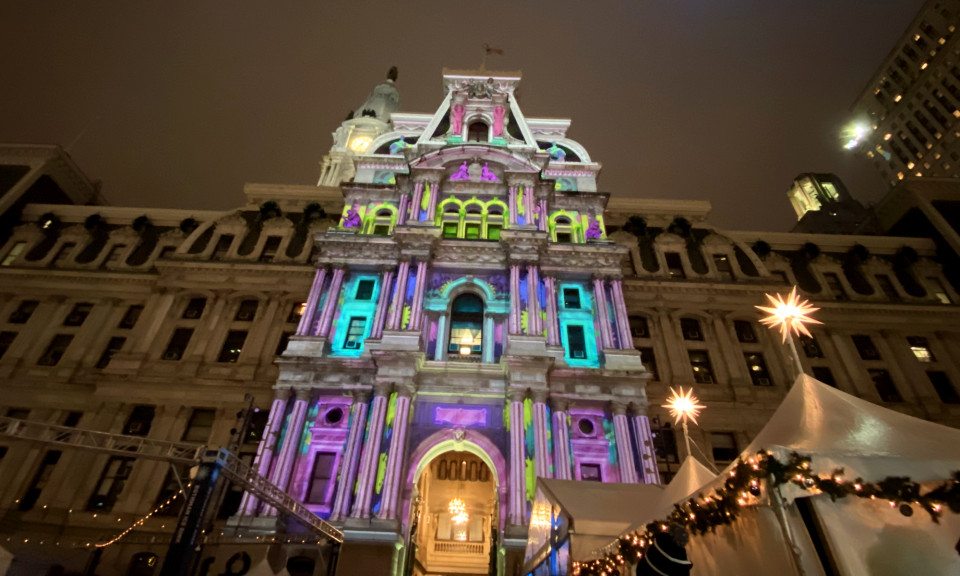 Dilworth lights up with large-scale projection-mapped animation to highlight City Hall’s architectural details. It’s a perfect addition to Rothman Rink and the holiday markets on either side of the street. Grab some mulled wine from the Chaddsford Winery garden booth, and watch the magic unfold at the top of every hour beginning at 5 p.m. daily and running through 9 p.m. (Speaking of holiday lights, while you’re there, why not check out Wintergarden? It’s open through February 26th.)
Free; November 21st-January 1st (daily, at the top of every hour from 5-9 p.m.), Dilworth Park, 1 South 15th Street. 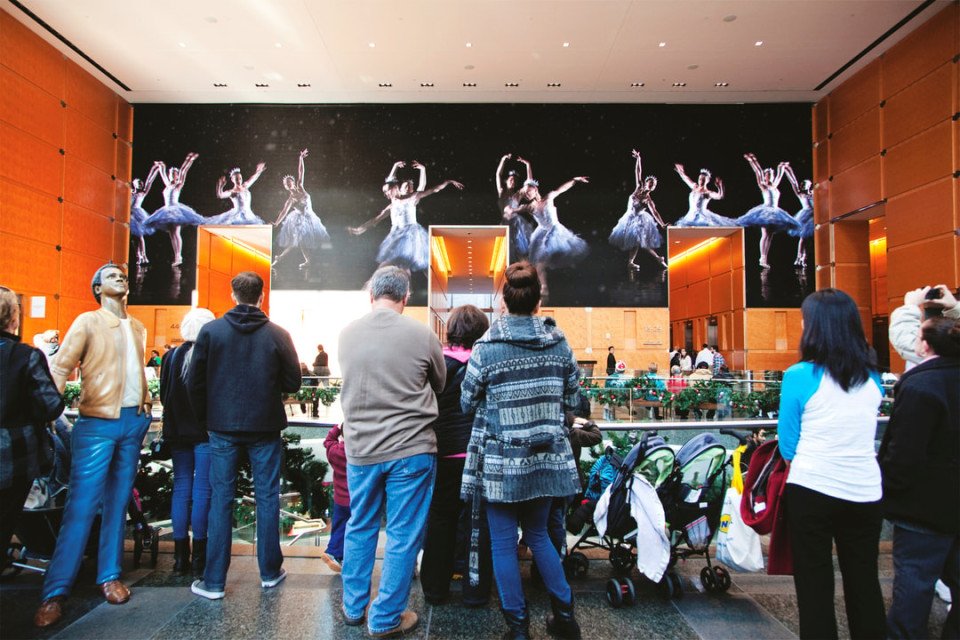 Not quite a light show in the traditional sense, but it’s a “spectacular,” so just go with it! Every year, this 15-minute festive musical fills the Comcast Center lobby with holiday songs, aerial footage of Philly, parts of the Philadelphia Ballet’s Nutcracker, and more on one of the world’s largest LED video walls. The show opens on Thanksgiving Day at 10 a.m. and runs at the top of every hour (except for 5 p.m.) through New Year’s Day. This year, Comcast is including a sensory-friendly version of the show every Thursday and Friday at 2:30 p.m. (and upon request).
Free; November 24th-January 1st (daily at the top of every hour, except for 5 p.m., from 10 a.m.-8 p.m.), Comcast Center, 1701 JFK Boulevard. 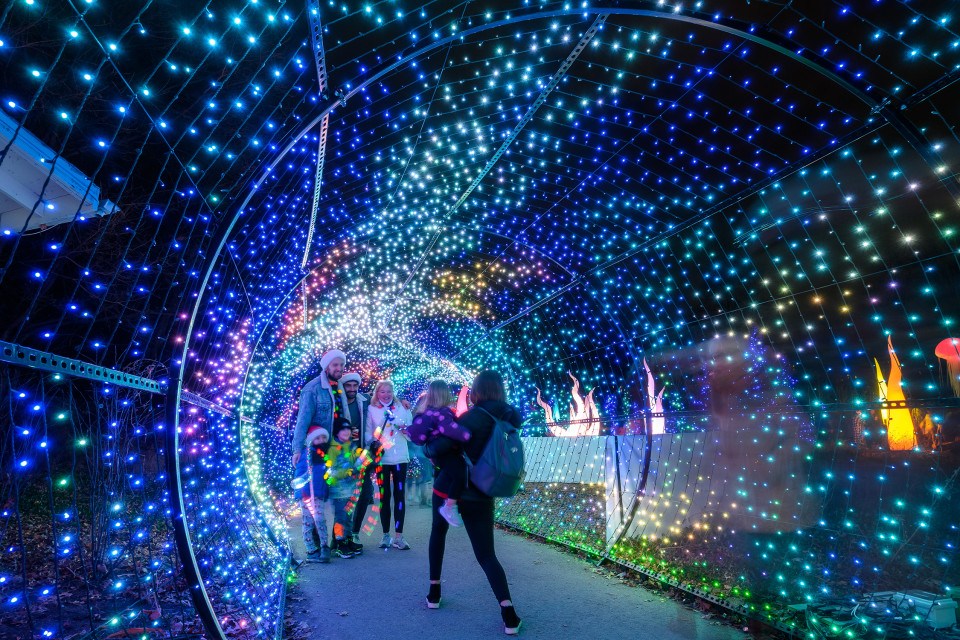 LumiNature at the Philadelphia Zoo / Photograph by Winnie Chung

The Philadelphia Zoo lights up for the holidays with larger-than-life illuminated zones and installations throughout the zoo. Favorites like the 25-foot-tall pink-flamingo tree, under-the-sea light tunnel, and giant snake archway return, along with new displays including a 15-foot-tall glowing blue gorilla. Also new this year is the “Penguin Prismatic” light show featuring a glowing 40-foot-tall penguin surrounded by a colony of little light-up penguins on the zoo’s Bird Lake. Seasonal fare, s’more-making at fire pits, strolling performers, hot chocolate (and adult beverages) add to the festiveness. Be aware that you won’t see zoo animals during LumiNature — it’s too dark, and most of them are sleeping. Pre-purchase timed tickets online (or grab a $33 “anytime” ticket for flexibility).
$20-$33 (free for children under two); November 17th-January 7th, Philadelphia Zoo, 3400 West Girard Avenue. 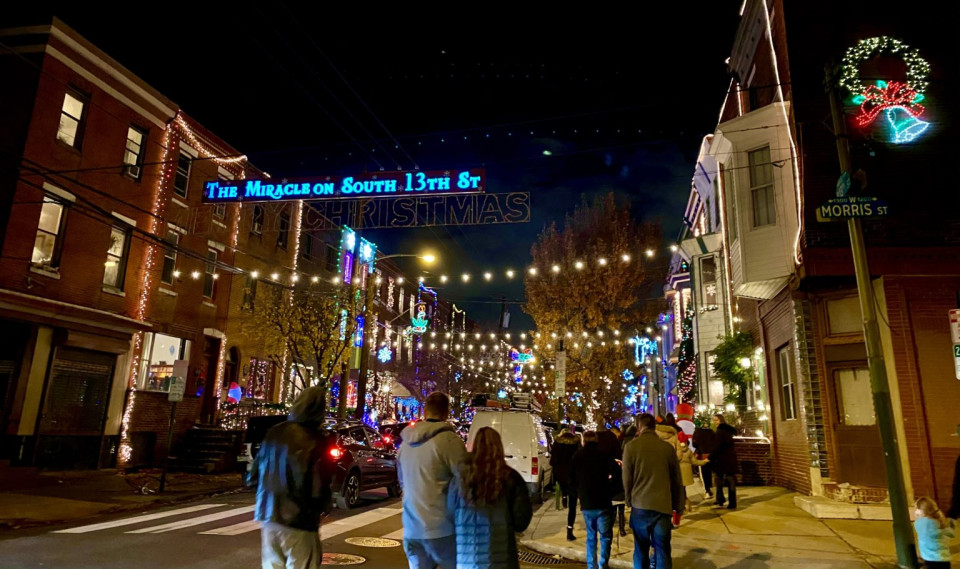 Every year, the residents of this lovely little South Philly block string up the lights and plug in the bobbing reindeer for a group-effort Christmas display that pleases the eye (and probably raises the PECO bill). It’s colorful and kitschy and pure Philly. Drive or walk through slowly and bask in its homespun glory from Black Friday till New Year’s.
Free; November 25th-January 1st, South 13th Street between Tasker and Morris streets. 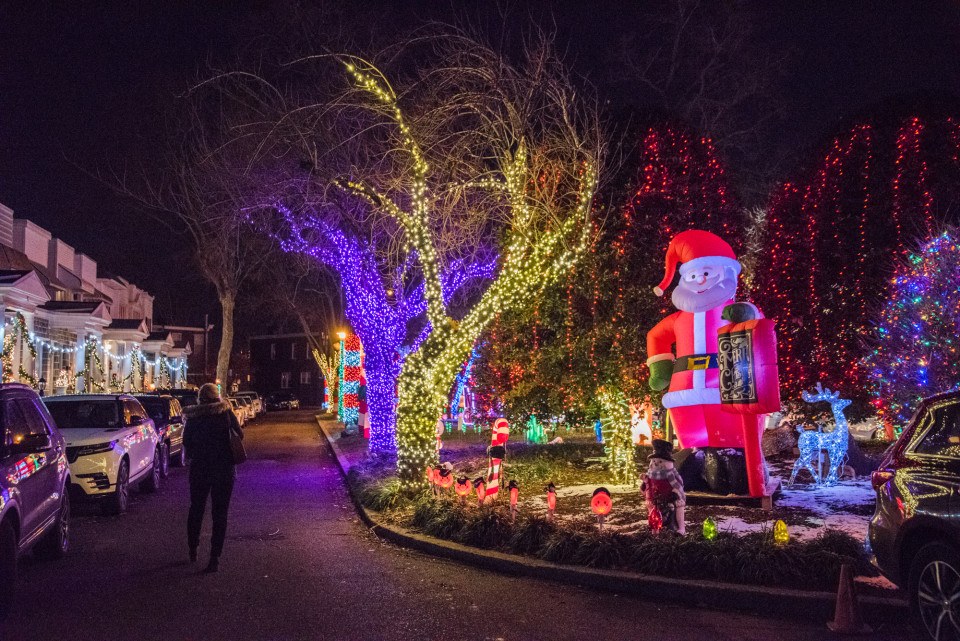 An otherwise unassuming block in Southwest Philly becomes a Christmas Street every year around this time, thanks to the many light-up attractions large and small that pop up along the median. Cruise through or bundle up and walk (but keep off the grass).
Free; Smedley Street between 16th and 17th streets, Moyamensing and Oregon avenues.

Like the aforementioned Miracle on South 13th Street, this holiday tradition in Tacony is as much a display of neighborly cheer as it is of watts and lumens. You might need to drive through a couple times just to take it all in. (Note: The Facebook page hasn’t been updated but we’ll assume this is still happening unless we hear otherwise.)
Free; through December 31st, 4200 Greeby Street. 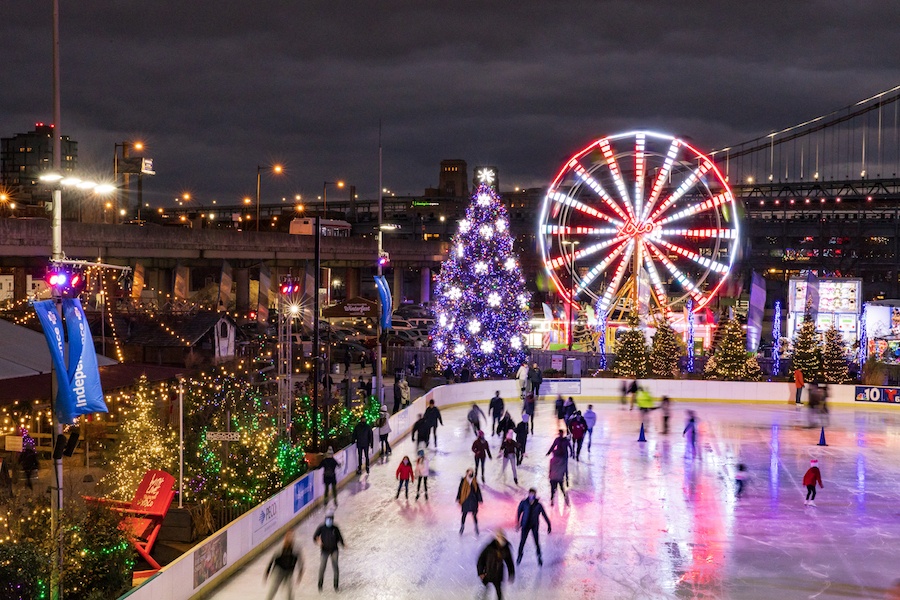 Winterfest lights up the RiverRink / Photograph by Matt Stanley

Eating and drinking costs money — as does ice skating and playing the arcade games — but being merry is free of charge. Put on a scarf and stroll the grounds of this riverside winter wonderland with a sweet view of the Benjamin Franklin Bridge. Plus, they’re having their tree lighting on December 2nd at 6 p.m. for even more lights.
November 25th-March 5th, 101 South Columbus Boulevard.

American Heritage Credit Union’s campus lights up with over 400,000 lights. Stroll the campus, enjoy the lights and decorations, and take lots of photos, all for free every night. It kicks off on Saturday, November 26th at 7 p.m. with a concert featuring the Ukrainian Children’s Choir Soloveiky and the New Jersey Fifes and Drums, plus Ben Franklin and Betsy Ross.
Free; November 26th-December 31st, American Heritage Carriage House, 2060 Red Lion Road. 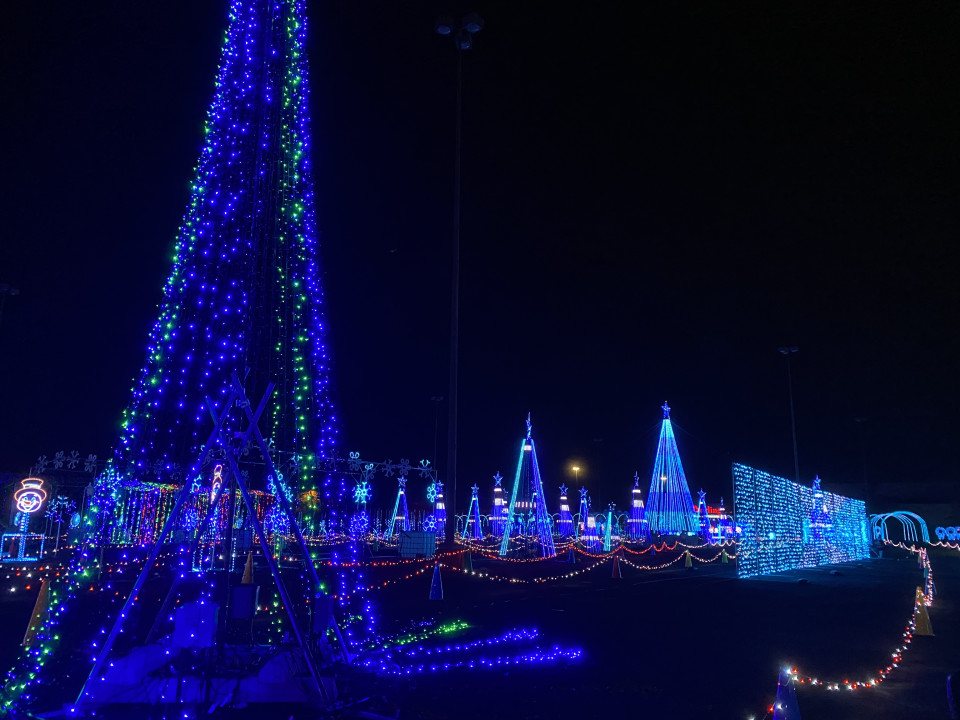 The festive holiday drive-through at Philadelphia Mills returns. Dasher’s Lightshow lets you stay in your car while you experience the sparkle of light tunnels, light-up displays and more. Scan your ticket and be sure to turn your radio to 103.1 FM, which will play music that syncs up with the light patterns. Even the little light-up penguin and snowman faces “sing” along to the songs! Note: Advance online tickets are required; no tickets are available on-site.
$30-$50 per car; November 25th–December 31st (daily from 5:30-10 p.m.), 1455 Franklin Mills Circle. 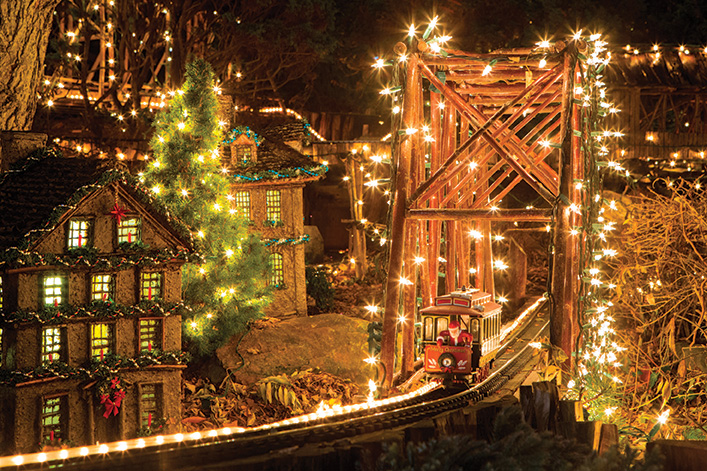 Holiday lights at the Garden Railway / Photograph by Mark Stehl

Morris Arboretum’s beloved Garden Railway gets its annual holiday upgrade. For the season, its quarter-mile of track and miniature replicas of Philadelphia-area landmarks made from natural materials will light up with thousands of twinkling lights. The garden holds special “Nighttime Express” ticketed events on weekends from 4:30 to 8 p.m. where you can really get the full effect of the lights.
$10-$22 (free for children under age three); weekend nights from November 26th-December 23rd, 4:30-8 p.m., Morris Arboretum, 100 E. Northwestern Avenue. 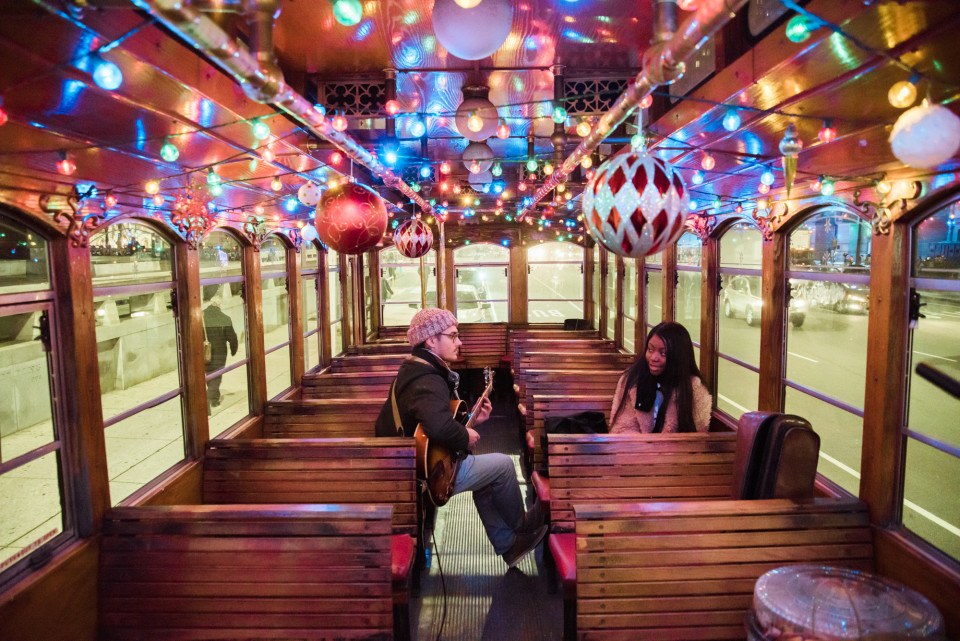 All aboard the jolly trolley! / Photograph courtesy of Founding Footsteps

Want to hop on a jolly trolley full of lights and music (and drinks, if you BYOB) and see a bunch of these lights in one night? Then book a ride with Founding Footsteps. Their decked-out holiday trolley features decorations and live music, and passes by festive sites like Miracle on South 13th Street, Smedley Street, the Betsy Ross House, Penn’s Landing’s Winterfest and more. Advance tickets are required, and weeknight tours are discounted.
$45-$60; select nights from November 25th-December 31st, meets at Craft Hall, 901 North Delaware Avenue.

Holiday Lights Worth the Drive Outside Philly 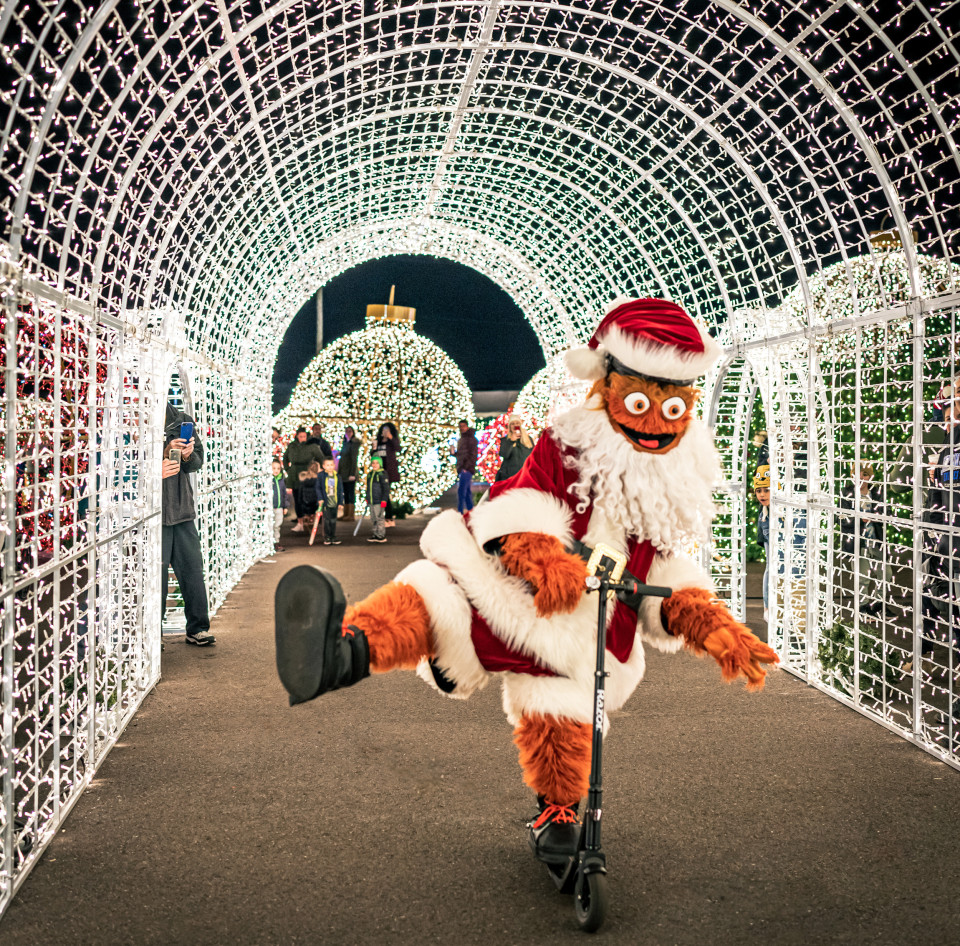 This dazzling outdoor holiday light experience features light sculptures and displays powered by more than 1.2 million light bulbs. Walk among larger-than-life sculptures, including a 60-foot light tunnel, Santa’s sleigh and some Philly sports-themed light sculptures, too. While you’re there, dine on festive treats and beverages (including cocktails) in the Tinsel Lodge. New for this year, there’s an ice-skating rink and a two-lane ice slide. And perhaps best of all, there’s Gritty Claus. Sure, there are photos with Santa and storytimes with Mrs. Claus the rest of the time, but select nights see Gritty dressed in his holiday finest, and what are you even doing with your holidays if not that? Advance timed tickets are required; additional activities like skating and Santa photos are extra.
$12.99-$29.99 (free for children ages four and under); November 25th-December 31st, 4:30-10 p.m., Greater Philadelphia Expo Center, 100 Station Avenue, Oaks.

Every winter, a live working farm in Yardley sets up a two-mile stretch of illuminated holiday attractions. Drive yourself through or hop in the back of an open-air wagon. Then pull over for cocoa and s’mores.
$40-$50 per car; $15-$23 for a wagon ride; November 19th-January 8th, Shady Brook Farm, 931 Stony Hill Road, Yardley.

Longwood Gardens glows up for the season with gorgeous outdoor and indoor light displays inspired by nature. There’s also live holiday music, open-air fountain shows, and the delightful Garden Railway display. Timed tickets are required, and weekends in particular sell out — but they’re one of the few attractions open on Christmas Day, so keep that in mind for next month.
$16-$30 (free for kids ages four and under); November 18th-January 8th, Longwood Gardens, 1001 Longwood Road, Kennett Square.

Taking a cue from National Lampoon’s Christmas Vacation, the Plummer family likes to go extra, extra large with their light displays. We’re talking about 103,000 bulbs, many of which are synched up for maximum bedazzlement. They start working on their holiday spectacle each fall, and it runs from Thanksgiving through New Year’s Day. The Plummers suggest that if you visit, to tune your car radio to 87.9 for Christmas songs and information about the display.
Free; November 24th-January 1st, 304 Dutton Mill Road, West Chester.