14 Ways to Experience Baltimore this Fall 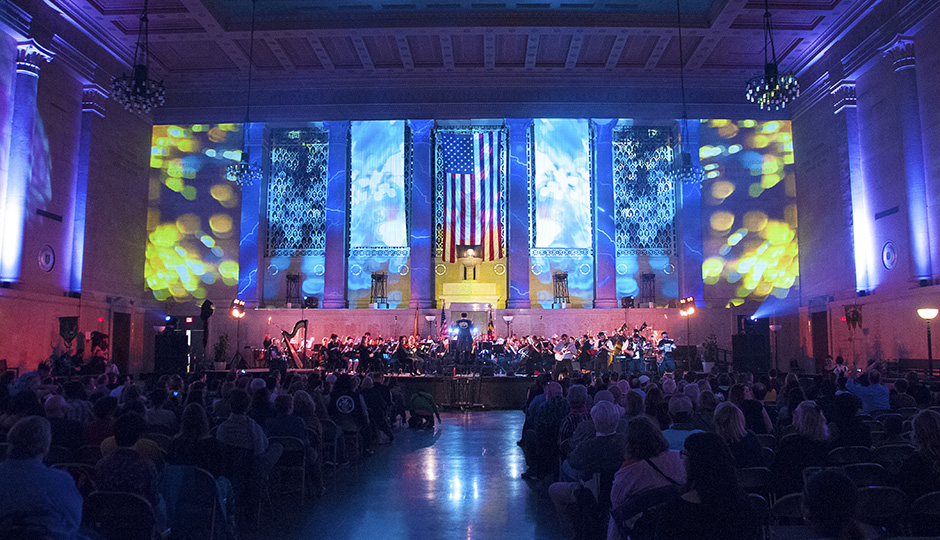 Baltimore is a distinctive city, one whose hometown heroes include cult filmmaker John Waters, musical nonconformist Frank Zappa and an NFL mascot named after Edgar Allan Poe. Oh, and where beloved annual events include toilet bowl races and a Da Vinci-worthy chalk art festival. This fall, visit Charm City to experience some of the wonderful ways Baltimore showcases its uniqueness.

Cheer on the Toilet Bowl Races

Hampden, considered one of the most authentically “Baltimore” neighborhoods in the city, hosts one of the most quintessential local races during Hampdenfest on September 9th. Dozens of superhero-clad competitors will climb atop toilet bowl chariots to race down Chestnut Avenue during the Toilet Bowl Races, a highlight of the annual neighborhood festival that also features three stages of live music, local beer, food and vendors.

The Madonnari Arts Festival celebrates the art of street painting, which is still commonly practiced on the streets of Italy, for two days on the one-ways of Baltimore’s Little Italy. Listen to live music, eat authentic Italian cuisine, and watch master Madonnari artists from all over the world create beautiful works of (chalk) art. This year’s theme is “freedom,” and will take place the weekend of September 9-10th.

Celebrate Defenders’ Day at one of Baltimore’s most historic landmarks, Fort McHenry National Monument and Historic Shrine, the weekend of September 9-10th. Here, you’ll see historic reenactments of the War of 1812, when Francis Scott Key was inspired to write “The Star-Spangled Banner” at the fort. The weekend also features music, fireworks and a parade. Naturally.

Baltimore is a hot spot for reunions of all kinds, whether it’s for family, Greek life, military, school, or your seventh-grade summer camp. The Baltimore Reunion Expo is a resource for all of your get-together needs, and the September 9th afternoon event includes activities like Paint N Sip, casino games, children’s activities, karaoke and more.

Let your geek-flag fly at two fantasy-themed conventions this September in downtown Baltimore. Harry Potter lovers will unite at Potterverse from September 8-10th. Fans of all things heroic will get a chance to compete in a costume contest, pick up comics, and meet famous superheroes like Lynda Carter (you may know her as Wonder Woman) at the 18th Annual Baltimore Comic-Con, September 22-24th.

The Reginald F. Lewis Museum debuts one of the hottest exhibits this season with a showcase that explores more than 50 artworks by acclaimed 20th-century artist Jacob Lawrence. The celebrated painter depicts African American life and culture through bright colors and geometric patterns and shapes. The collection includes pieces from collectors in and around Maryland in the exhibit that runs September 9th through January 7th.

Baltimore is known for its rich bounty of crabs, oysters, rockfish and other gastronomic wonders found under the sea. On September 16th, join fellow seafood-lovers at the Baltimore Seafood Fest, a waterfront event in Canton that features a wealth of seafood, cooking demos and children’s activities.

The Baltimore Rock Opera Society is one of the city’s performing arts gems, producing original rock operas with lavish sets and killer voices. The group’s fall show, The Terrible Secret of Lunastus, is an action-comedy about space, with performances September 15th through October 8th.

Baltimore was recently named one of the fastest-growing cities for tech companies and entrepreneurs. See for yourself during Baltimore Innovation Week from September 29th to October 7th with events related to development, science, business, media and more.

Edgar Allan Poe died under mysterious circumstances on October 7th, 1849 in Baltimore. Visit his grave at Westminster Burying Ground, or his family home, which is now the Poe House and Museum. Read “The Raven,” cheer for The Ravens and/or sip a Tell Tale Heart IPA from local brewer Raven Beer to really get in the Poe mood.

And then Run at Baltimore Running Festival

You may want to race in the Baltimore Running Festival just for the crab-shaped medal, but even if you’re not running, the festival, which is October 20-21th, features fun wellness activities that are free and open to the public. Check out the Nava Health and Vitality Expo, where you can find deals on activewear and health care products, or on race day October 21th, visit the BGE Home Celebration Village, which features live music, interactive games, a kids fun zone and local food and drink.

Experience the Hidden Haunts of Baltimore

Doors Open Baltimore, running October 28-29th, offers access to more than 50 historic and eccentric locations throughout the city, many of which aren’t normally open to the public. Check out the Arabber Preservation Society, which still supports the tradition established in the years following the Civil War of vendors selling fruits and vegetables from colorful horse-drawn carts. Also visit the Duchess of Windsor Museum at Adele Corner House, a private residence that pays homage to Baltimore-born Wallis Simpson, Duchess of Windsor, with memorabilia, newspapers of her life with Edward VIII, and replicas of her jewelry.