On the Market: Renovated Townhouse in Rittenhouse Square

This rehabber’s rookie project is an elegant, modern classic knockout. It helps that she’s had a good bit of design practice. 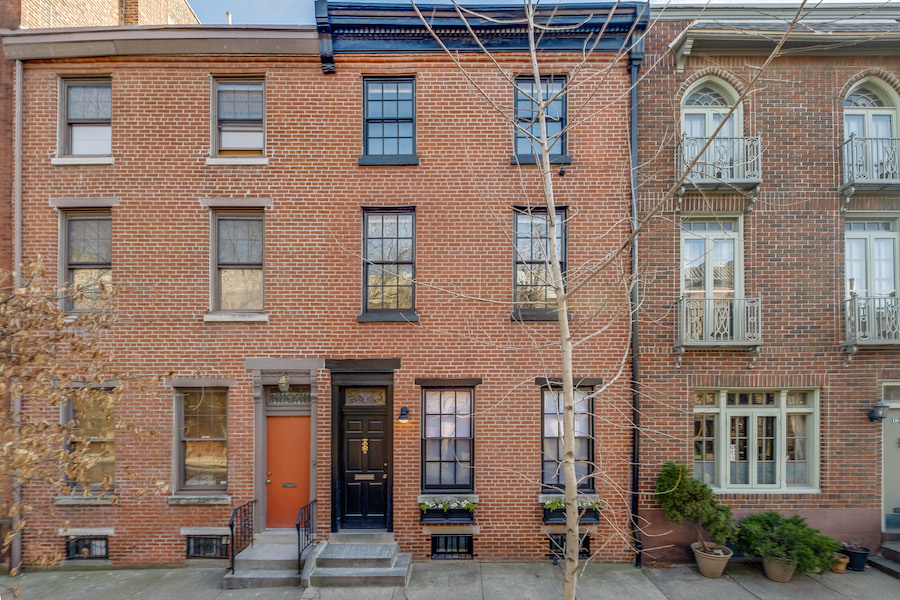 It doesn’t get much more classic than this handsome townhouse in Rittenhouse Square. It’s a classic on the inside too, but the rehabber who made this her debut project has made it modern where it counts. You’ll find it at 1934 Pine St., Philadelphia, Pa. 19103 | Photos: Paul McGlade via Compass

Given all the effort that goes into renewing a house, it should surprise no one that first-time rehabbers are proud of their work and eager to show it off. Jumpstart programs around the city are producing scores of these proud parents every week.

But some rookie projects rise above the crowd into the realm of the truly exceptional. This Rittenhouse Square renovated townhouse for sale is one of those.

The house itself, as you can see from its facade, has been around for a while; year-of-construction data is missing from its listing, but I think it’s a safe bet to say it predates the Great Depression and maybe even World War I.

In the hands of Luisa Ramirez, it’s become a strikingly modern townhouse that still displays its early-20th-century soul.

Ramirez — who arrived here from Mexico when her husband, Justo Sierra, who works in the pharmaceutical industry, got hired by Merck — explains that restoring a vintage residence is something she had been dreaming of for some time. “I’ve wanted to restore places since I was in college,” she says. “I’m very interested in the history of the buildings.

“And I’ve been working for the family business, doing architecture and design mostly, focused on innovation. This was a personal project that I’d had in mind for some time.”

Ramirez’s family business is Cinépolis, Mexico’s largest and the world’s fourth-largest movie-theater chain, founded by her grandfather Enrique Ramirez Miguel in 1971 in their hometown of Morelia. There, she worked as the firm’s in-house architect and designer. Here, however, she finally found a place where she could pursue her personal passion.

“Philadelphia has a lot of history,” she says, “and when we found this house, it was a good opportunity.” The house’s traditional design, which she characterized as Victorian, appealed to her.

I think you will find her reworking of it equally appealing. 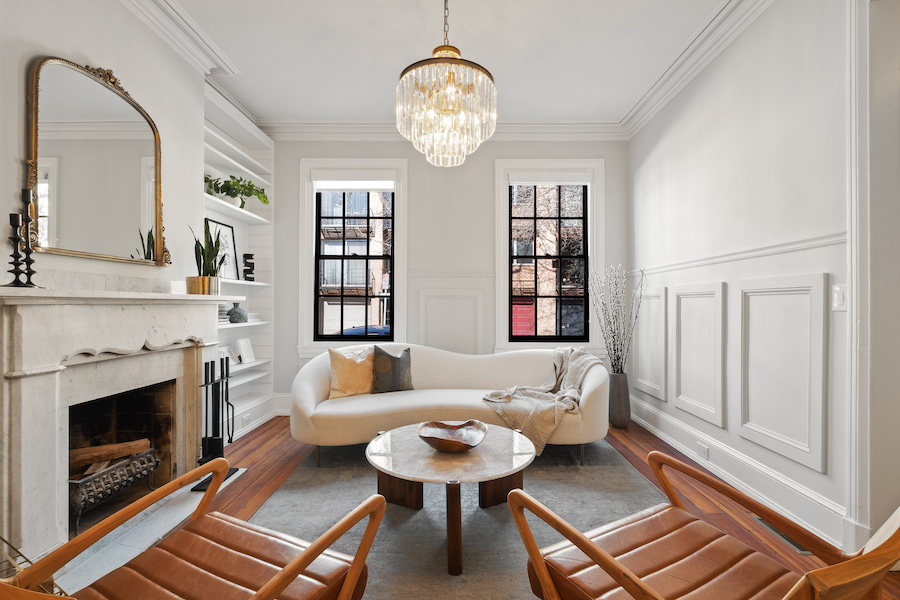 The blend of tradition and modernity that characterizes this makeover becomes apparent the moment you exit the foyer and enter the living room. Wainscoting, crown moldings, a marble fireplace mantel and a crystal chandelier all show its classical roots, yet the room nonetheless feels fresh and modern. 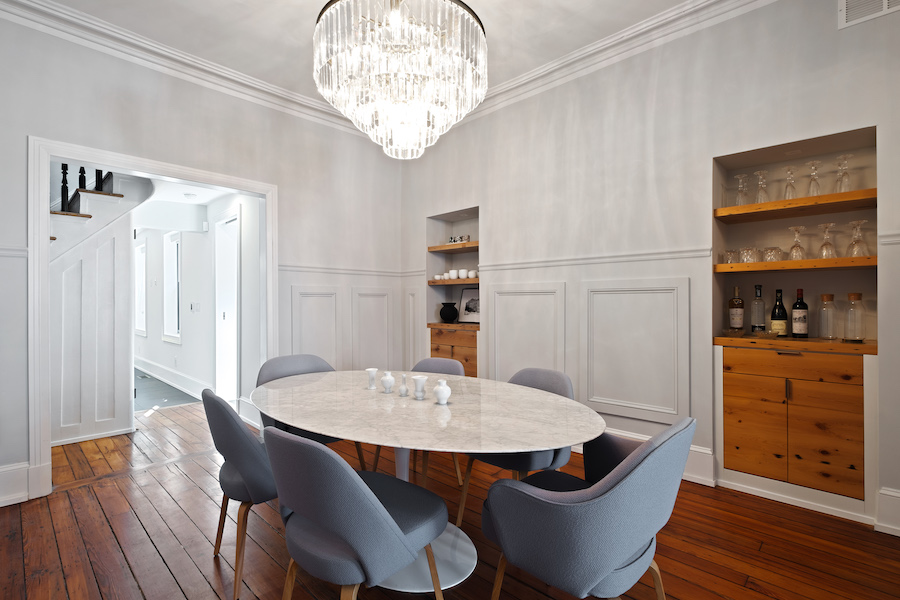 The arrangement of rooms on the main floor is likewise very traditional, with distinct spaces for living, dining and cooking. But a modern sensibility infuses all three. In the dining room, it shows up in the built-in storage shelves and cabinets. 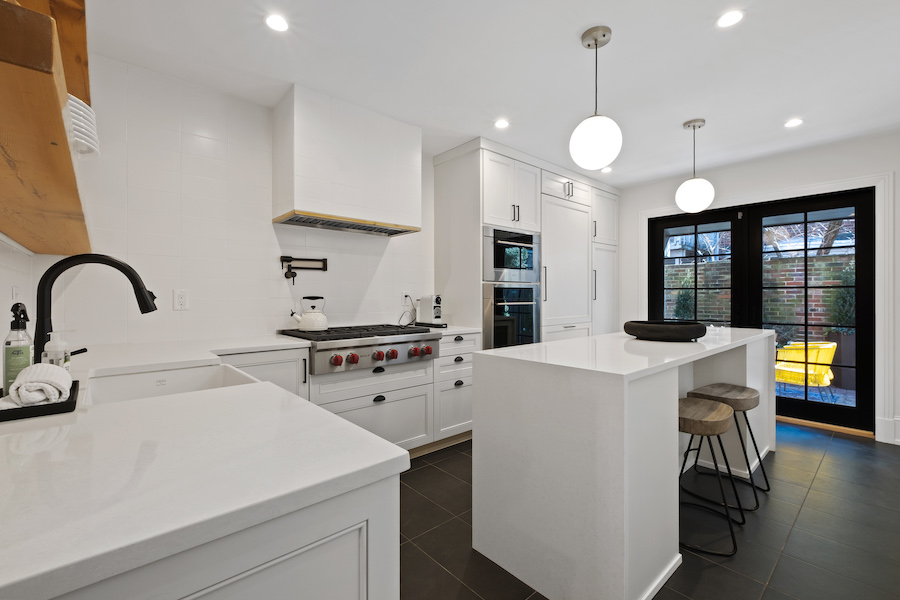 And in the kitchen, it shows up … just about everywhere. The nod to tradition here is in the mix of Shaker and farmhouse cabinetry, but the appliances and the open shelves are all au courant. 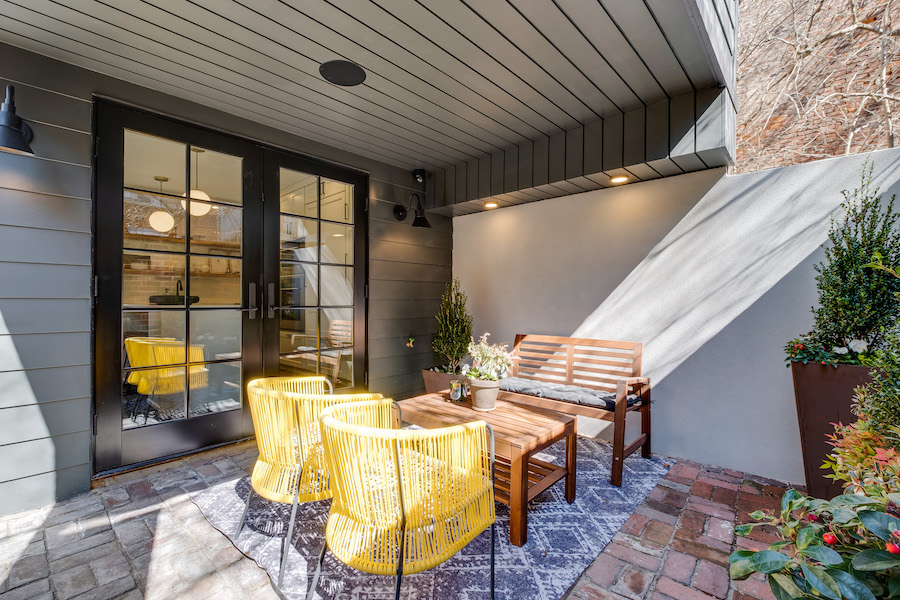 And the second-floor projection over the rear patio beyond the kitchen gives it a contemporary flair as well.

All of this house’s original wide-plank hardwood floors and the banister on its staircase were refinished to a high sheen that makes them stand out against the white walls. Ramirez chose white as the dominant color for the house’s rooms in order to give its buyer complete freedom to add color and texture to suit their taste. 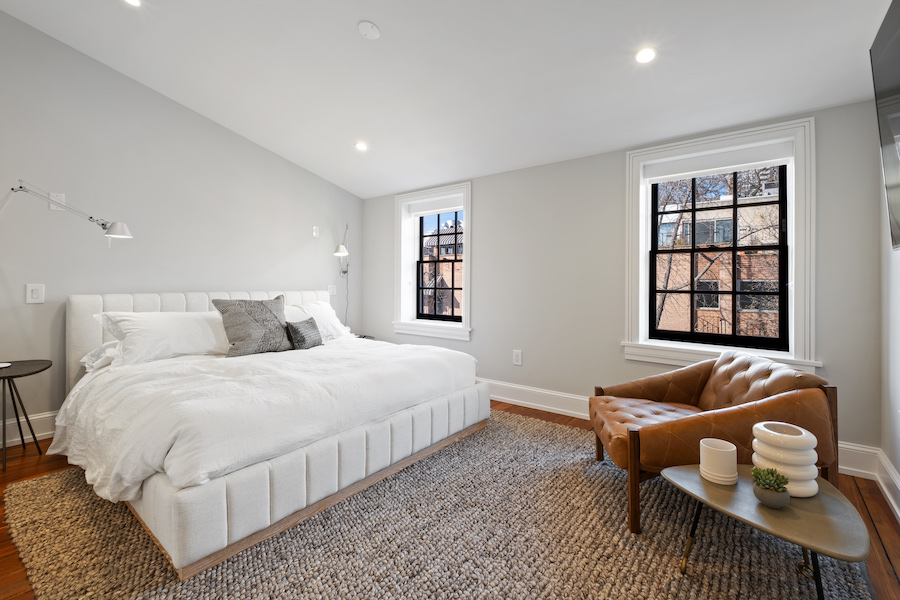 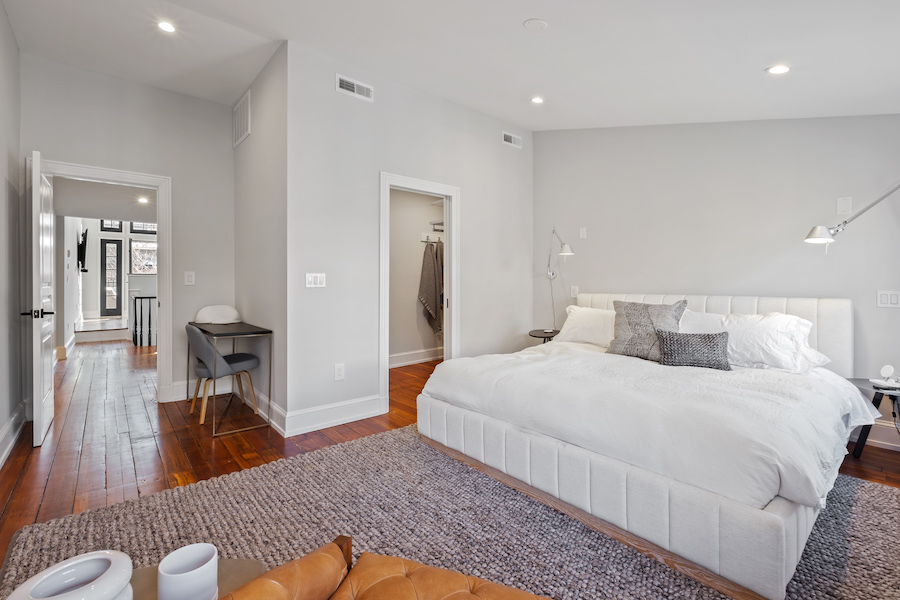 Another modern feature she incorporated into this house: All three of its bedrooms have en-suite bathrooms accessed through their closets. This is actually a very efficient design that also allows two people to go about their morning routine without bumping into each other. And the vanities in the bathrooms have large countertops: Ramirez likes to have room to put toiletries, candles and other decorative objects on her vanity and thought you might appreciate the ability to do the same. 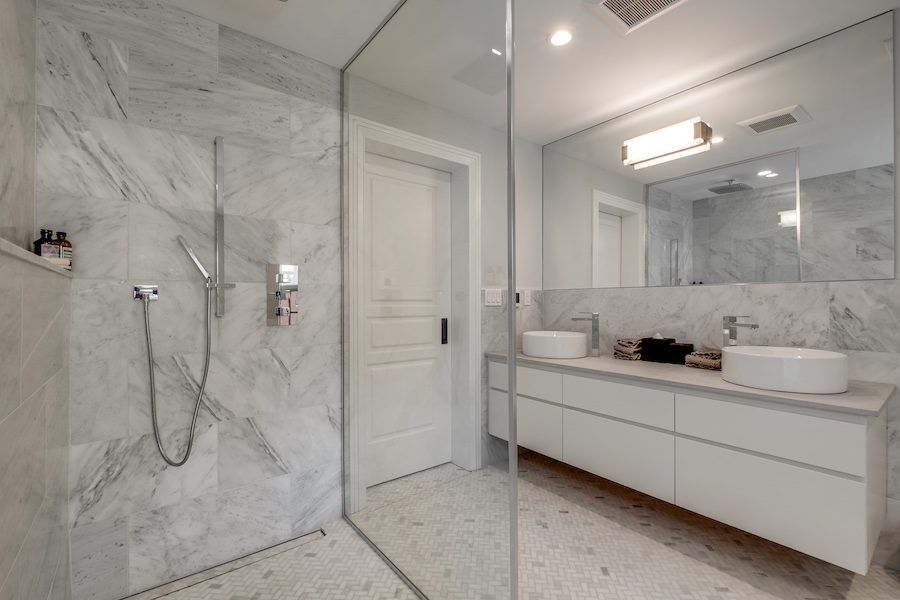 Of course, the double vanities in the top-floor primary bathroom make this even easier to do. Ramirez designed the top floor so it could be used flexibly. 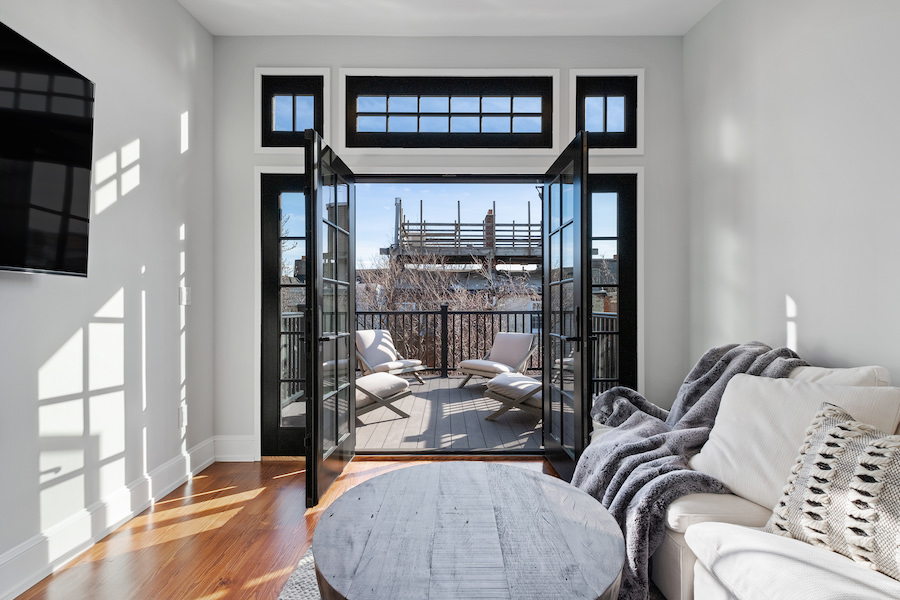 The staircase is part of an open space outside the bedroom that could be used as a sitting area or den, as here, or as a home office. 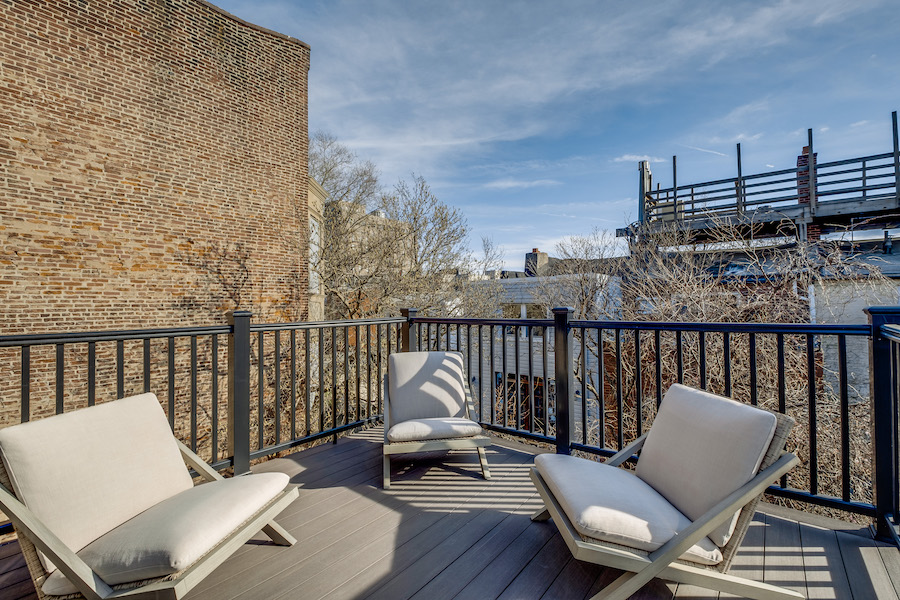 It could also be used as an extension of the rear deck beyond it, and since it lies outside the bedroom, both can also be used to entertain guests. And if they need to go to the bathroom, don’t worry — there’s a powder room on the main floor. 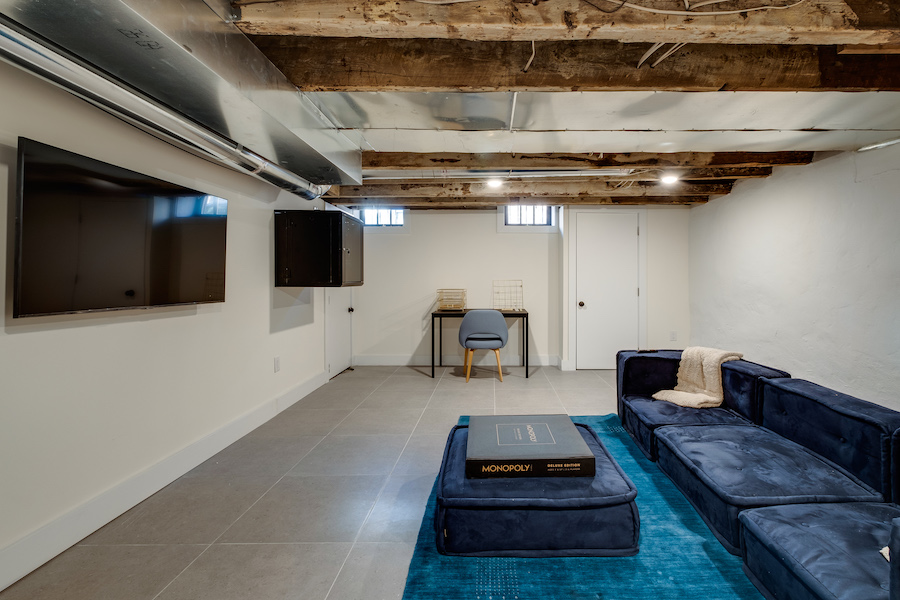 And below the main floor, a finished basement can serve as a media room, home gym, playroom or storage space. Laundry facilities are in a second-floor hall closet.

“My idea was to make it useful for the needs of these times,” Ramirez says. That she has, and it only took her about two years to do it. But she’s eager to get her hands on another house to remake. And I’m eager to see what she produces.

Updated May 7th, 6:48 a.m., to correct both the name of Cinépolis’s founder and his relationship to Luisa Ramirez.