Ken Weinstein Is Changing the Future of Development in Philadelphia

Without doing any of the developing himself. 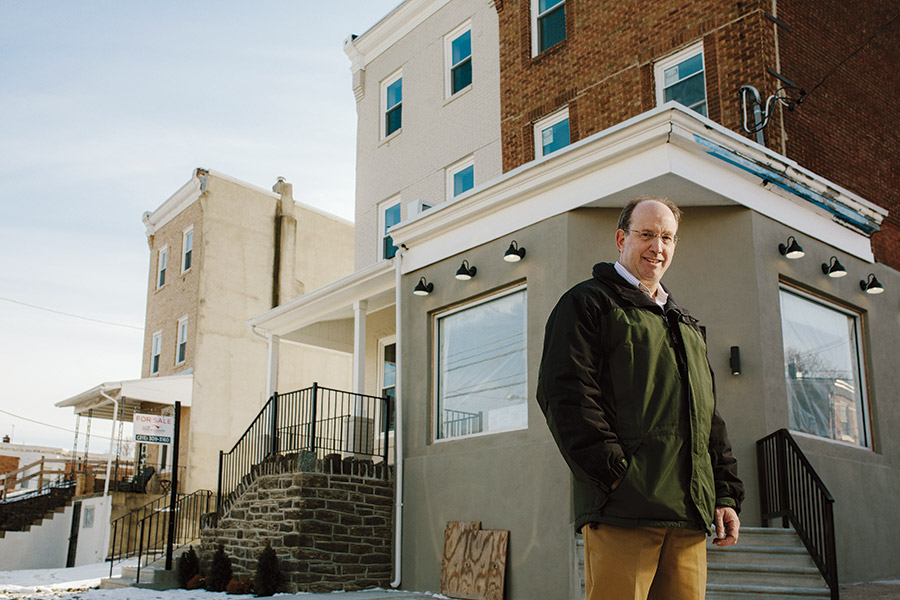 Imagine hundreds of developers getting their start all while breathing new life into their childhood neighborhoods and without pushing longtime residents out. If this sounds like some sort of fantasy, you haven’t met Ken Weinstein yet.

Two years ago, the Mount Airy-based builder created Jumpstart Germantown, a boot camp for aspiring developers. The wait list now has more than 500 names on it. This year, the model’s set to go viral: A Kensington developer just launched an offshoot there; thanks to a grant, other city neighborhoods will compete for seed money to start their own programs; and other Pennsylvania towns expressed interest when Weinstein took his program to Harrisburg. Here’s how he got here.

How’d you come up with this idea?
More and more aspiring developers were saying, “Hey, could you sit down for an hour and tell me how you got into real estate, tell me what mistakes you made?” They were asking all the right questions, but in one hour, you can’t get someone prepared to be a developer. So I decided to put together a nine-hour curriculum and a group of mentors who were willing to walk people through their first, second and third projects. I started training 20 people at a time.

How many people have you taught?
We’ve graduated 235 people and have 545 applications pending.

And all this is being done without outside funding?
We did get a $125,000 grant from the Barra Foundation to replicate the program. We weren’t seeking it. The Barra Foundation heard about Jumpstart Germantown and said, “This is the kind of model we want to support,” so they made a grant. We enlisted the Local Initiatives Support Corporation to be our fiscal sponsor and hired a consultant to produce a how-to guide and workbook that talks neighborhood leaders through how to start a Jumpstart program.

At one of the meetings, I noticed that just about everyone in the room was black.
Roughly 90 percent of our graduates so far have been African-Americans or women. Those are two groups that are grossly underrepresented in development. One of our goals with Jumpstart is to diversify the development world.

Published as “The More, the Merrier” in the February 2018 of Philadelphia magazine.