Say Bye-Bye to the Boner 4Ever Building

A plan to restore North Broad’s most notorious empty shell could show the city what “social impact development” can really do. 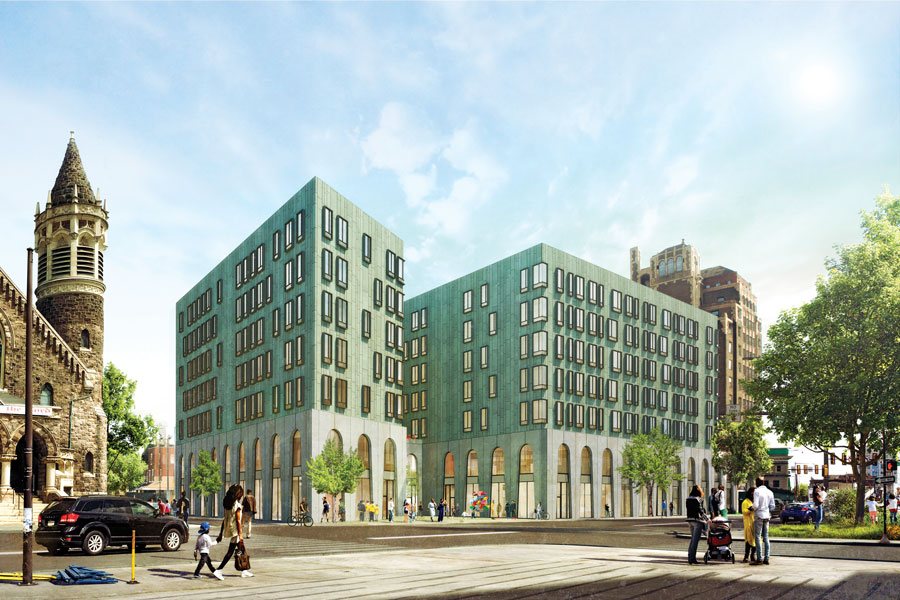 A rendering of Shift Capital’s plans for the Beury Building — a.k.a. the Boner 4Ever building — in North Philly. Rendering courtesy DIGSAU

If everything falls into place, in a little more than two years, your out-of-town friends might just want to stay in a building best known for having “Boner 4Ever” painted on its sides.

That infamous graffiti will disappear once development firm Shift Capital begins restoring the circa-1926 Beury Building in the heart of North Philly, just a few blocks above Temple University Hospital. Shift, which gained control of the building in 2012, intends to turn it into a Marriott. And its neighbors in Tioga, Nicetown and Hunting Park are rejoicing.

“We’re cautiously optimistic,” reports Josh Klaris, executive director of North10, a social-service organization based in Tioga. “And the community is excited about the prospect of jobs coming to the neighborhood.”

North10 is one of six organizations that have joined forces to give the Nicetown-Tioga community a voice in reshaping this critical triangular intersection. Shift has consulted repeatedly with the group, known as the Broad-­Germantown-Erie Collaborative, over the seven years it has worked on reviving the building.

And this is what makes Shift different from most real estate groups. The firm, led by founder and principal Brian Murray, practices “social impact development,” meaning it aims to improve the community (by creating jobs, tempering gentrification, and filling abandoned properties) while also making money.

Shift has a proven track record for this style of development in Kensington, Harrowgate and Juniata. It benefits from tax breaks awarded for preserving historic buildings, creating affordable housing, and, more recently, operating in an “opportunity zone,” which, for one thing, means those who invest in its projects don’t have to pay a capital gains tax. The concept of social impact development is gaining adherents in Philly, and many observers hope the Beury will serve as a prime example of what such development can do for neglected city neighborhoods.

While negotiations are still under way with the hotel, Murray is optimistic that they’ll conclude successfully. And revised plans for the second phase of the project call for a new building with affordable housing and more retail.

Cynthia Barnes, head of the Nicetown-Tioga Improvement Team, says she appreciates how Shift has kept neighbors informed and involved in the project: “To credit Shift, even though we might not have liked some of their proposals, they have been open to the community.”

The results promise long-term jobs for the community, newcomers visiting the neighborhood, and affordable new housing. And the project just might change the way many Philadelphians see the northern part of their city.

Published as “Bye-Bye, Boner 4Ever” in the February 2020 issue of Philadelphia magazine.