Many are offering virtual consultations or COVID-19 compliant ceremonies.

Personalization remains a major factor among Philadelphia couples who seek to outfit their wedding with nods to their heritage, relationship and favorite things. Whether it’s centerpieces that harken your pup or a snazzy tinsel jacket, these unique touches bring character and individual style to your celebration, and every one of your vendors should be aligned in bringing that to life. Your wedding officiant should be no different; in fact, the individual you select to marry you should be someone you trust and admire, and a person who wants to make your day all about you, no matter the type of celebration you choose – religious, interfaith, traditional, secular or completely custom. Here, we’ve compiled a list of Philly-area wedding officiants to help you take the first step on your journey together. 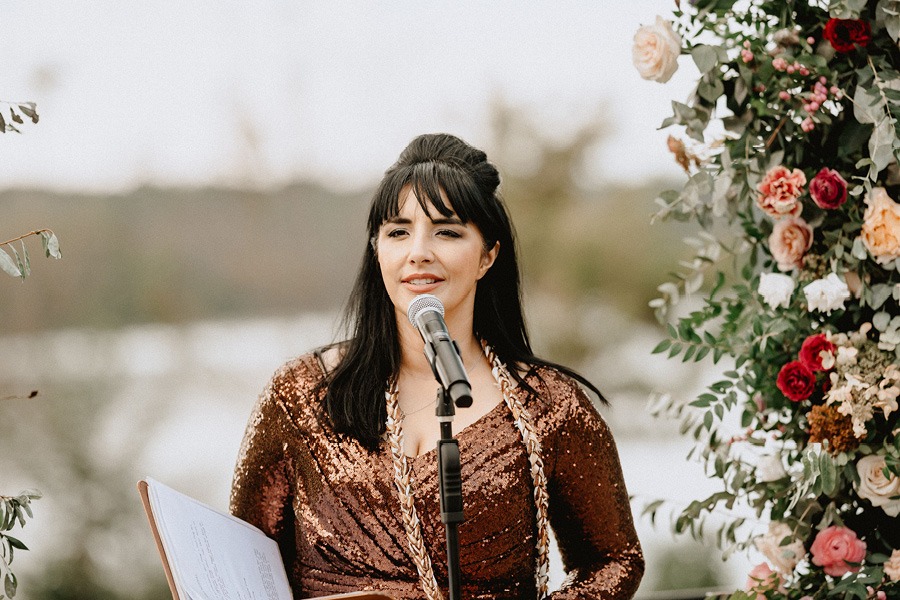 When it comes to wedding celebrants, the Hawaii native is a true gem who is driven by making your Big Day special for you and yours. (In fact, she’s been working with lawmakers to update marriage laws in the state to give couples more choice for legal ceremonies.) Tongg, who calls herself a storyteller, has a warmth and authenticity that was touched the hearts of countless pairs, their friends and families. She spends about six weeks with her couples — learning more about the two as individuals and as a duo, and what they seek in their union. She is trained to perform nondenominational, intercultural, interfaith, secular and humanist celebrations, and will travel throughout the region (though her Promise Ridge venue is a lovely setting for micro-weddings and elopements too). She’s also made the decision to exclude ceremony elements such as passing the sign of peace (which requires a handshake) or ring blessings (they’re shared among the group to imbue them with goodwill) in the wake of COVID-19, and now has a class to train your friend to officiate too. But what we love the most about her is her inner sparkle — and her chic sequined dresses for wedding day flair. 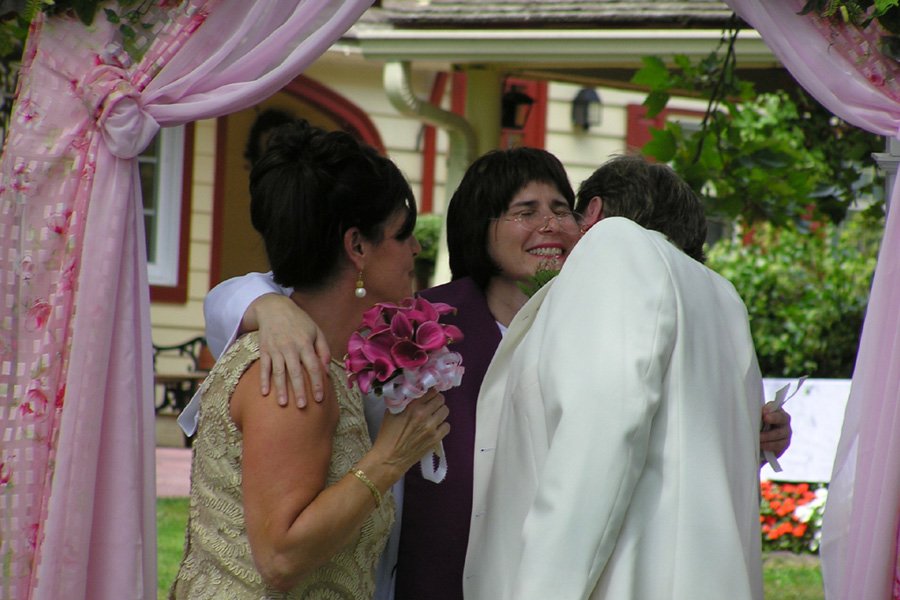 A couple with officiant Elizabeth Frumin. Photo courtesy of the officiant

The Weddings With Heart officiant (who also doubles as a coach, therapist and counselor) designs and serves at wedding and commitment ceremonies that wholly reflect the couple’s perspectives on love, life and what their union should be. She typically begins with an in-person meeting in her Narberth office (or via Zoom, Skype, FaceTime and other video conferencing systems); she recommends a face-to-face meeting so you can get to know her and vice versa. From there, she’ll provide a list of questions for you to answer, asking about preferences on verbiage (such as spiritual or religious words to include or leave out) as well as what you appreciate about one another. 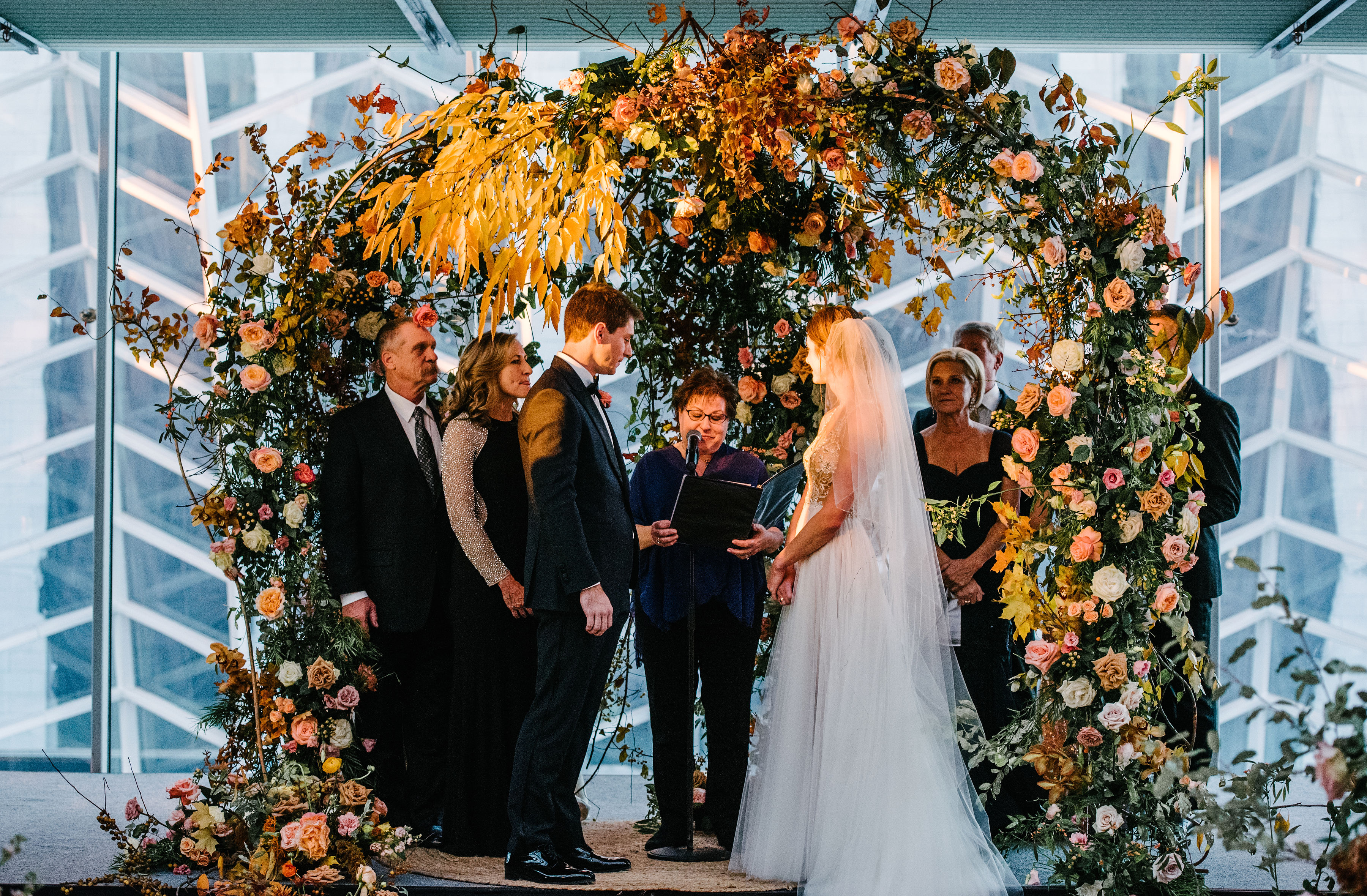 Jill Magerman at a fall wedding. Photo by AGP Collective

This is a woman who says she’ll be as traditional or out-of-the-box as couples will allow her to be: She’s created elements that are customized completely to their tastes, like an ice cream sundae ritual or a coffee-blending. “It’s my passion and goal to get to know them both individually and as a couple so that I can [craft] a ceremony that really reflects who they are,” says Magerman of Meaningful Milestones. Interfaith unions are a passion for Magerman, who will work with the duo to blend different traditions or aspects of their cultures or religions to ensure a ceremony that speaks to both of them and their heritage. Magerman is a certified professional life coach, and she believes her expertise in this field aids her in her work with couples too. Additionally, she offers ceremony consultations, helping to script meaningful celebrations for those who may have a destination wedding or other circumstance. She’s begun using her coach skills to support those whose plans have changed in light of the coronavirus crisis and is offering micro-weddings to aid those who have been impacted as well.

Journeys of the Heart 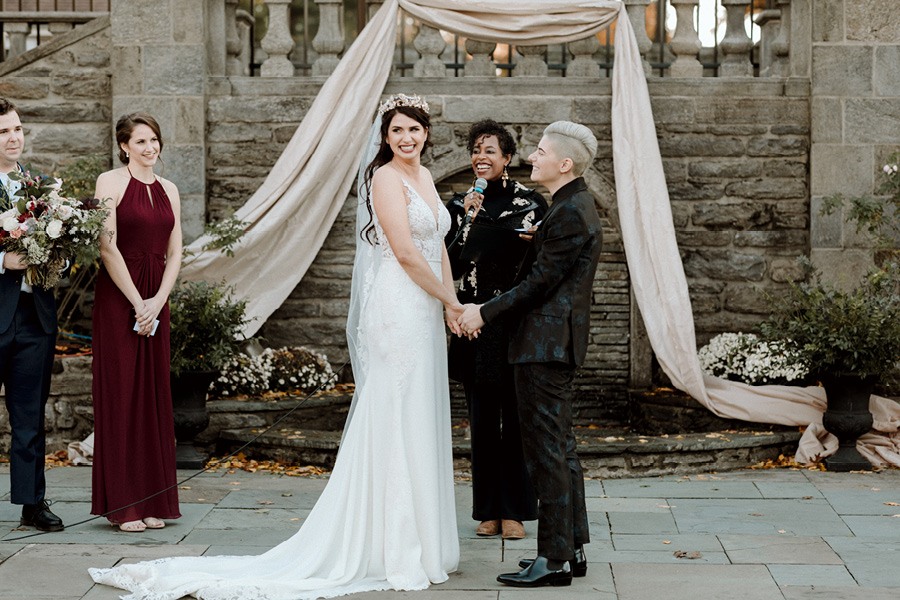 Journeys began in 1995 and has long been a champion of marriage equality, initially officiating commitment ceremonies for same-sex couples and eventually weddings for all following the 2015 Supreme Court ruling. The organization and its more than two dozen officiants work with a diverse range of couples, regardless of belief, spirituality, gender and sexual orientation. The process begins with a free officiant match (based on location, availability, requests) and consultation, followed by crafting of ceremony drafts and edits based on a Love Story questionnaire. The group offers three different packages (Platinum includes additional meetings and advanced rehearsals). Journeys has also been offering socially distanced elopements for couples who want to keep their initial date in light of coronavirus and has been providing guidance on obtaining a license. But a custom ceremony is key, no matter what. 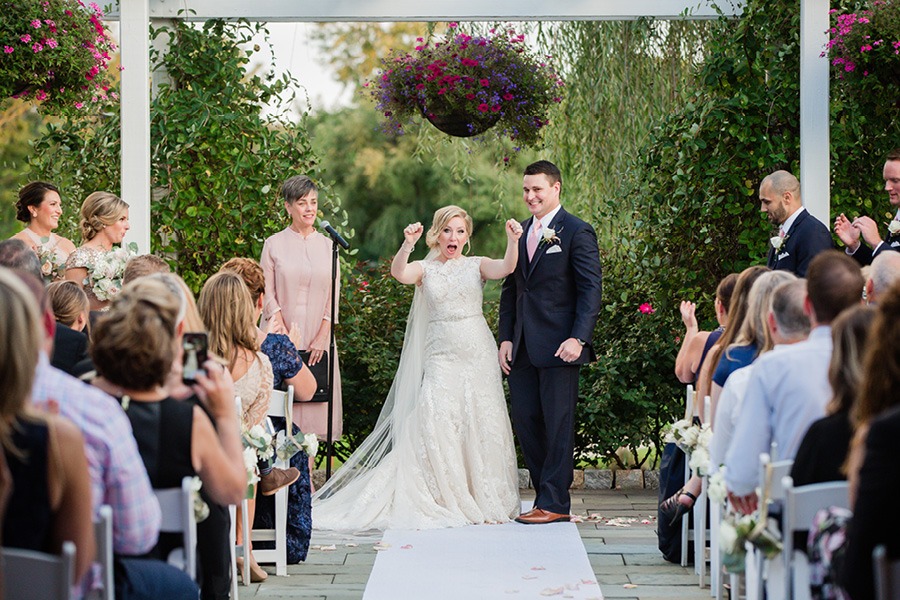 Kathleen Spicer with a celebratory couple. Photo courtesy the officiant

For this wedding minister and officiant, the focus is always on the couple, whether there are 500 guests or five. “I try to give them great eye contact throughout the ceremony that reassures them and makes them feel at ease,” says Spicer, who holds a doctorate in religious humanities from the Universal Life Church and is dedicated to couples seeking civil, nondenominational, Christian and interfaith ceremonies. She is dedicated to diversity and equality for all. An added perk: With Two Hearts, One Love (the group of ministers with which she is involved), she can also assist with a vocalist and musicians for your ceremony tunes. While she typically meets with couples in complimentary consultations, she also has taken appointments virtually; she’s even done a few Zoom weddings. “Even for the little ceremony,” she says, “I still write every sentence with as much of their unique detail.” 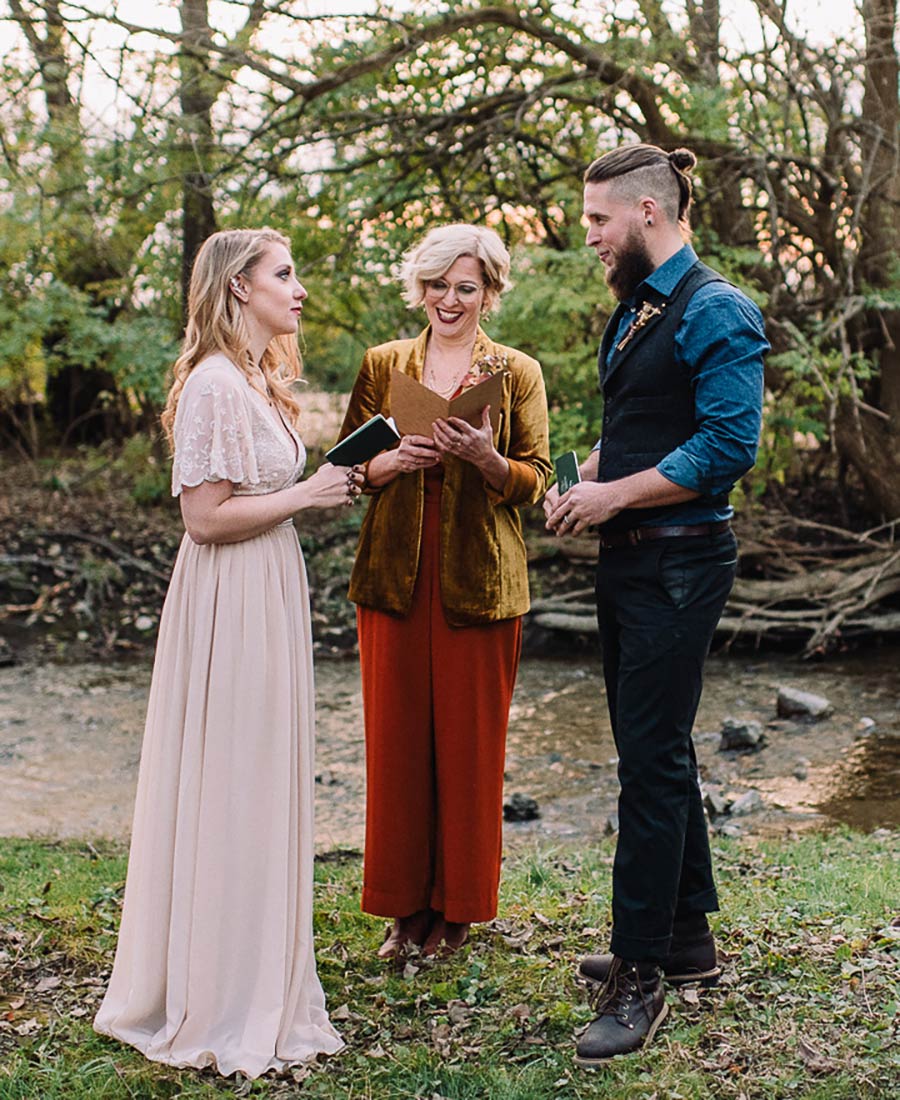 Donna Forsythe began serving as a celebrant in 2014, the year marriage equality passed in the state. Her first wedding was for two men in their 70s. It was an experience that inspired her to become endorsed as a humanist celebrant through the Humanist Society and start her business. Today, her team is made up of six officiants, the newest being Kiera Wilhelm, a teacher and performer who enjoys working with the couple on sharing their journey to each other, their relationship and what makes them unique. The officiants can help couples say “I do” whether it’s a micro-wedding, elopement, ceremony signing or larger wedding; bilingual celebrants are also available. The process begins with an initial consultation that addresses specifics such as mixed faith or any particular rituals you’d like to include to pay tribute to your heritage. A questionnaire follows; a draft of the final script is also available for the couple’s review. Forsythe recently began a six-month training program to help individuals become professional celebrants; she says such offerings are largely recognized in other countries but are new to the United States. The main goal: to make your ceremony the beginning of the celebration, she says. 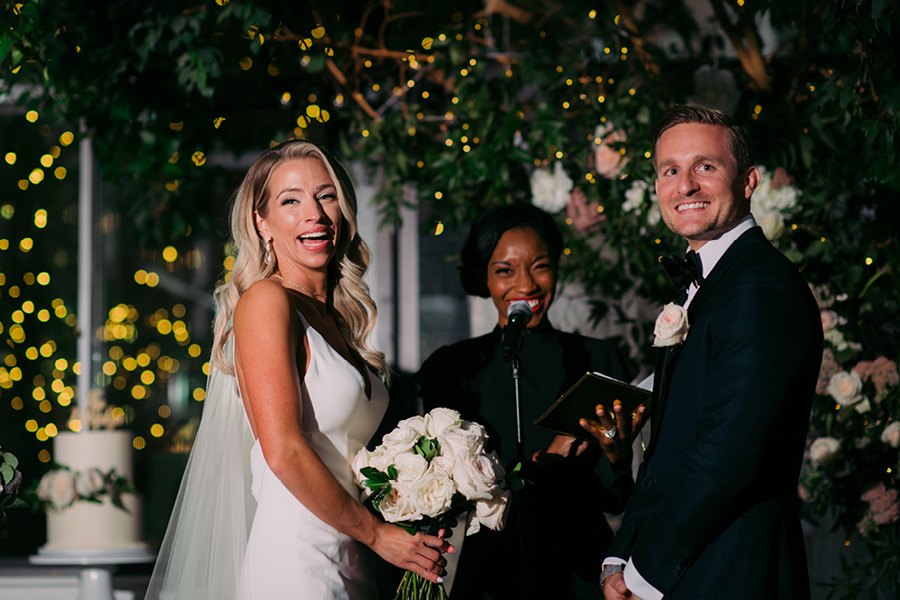 Celebrity officiants do exist, and Roxanne Birchfield is exactly that. Birchfield, a former chaplain in the U.S. Army and Penn State grad, has been featured on Netflix’s original series Love Is Blind and other shows. She offers premarital and marital counseling in person or virtually with husband (and fellow reverend) Joshua, and has four other assistant officiants (including the hubby) trained to carry on her legacy. She spends an average of more than 18 hours with the couple, working to create a bespoke ceremony fitting of their needs and relationship. By the way, Roxy and Joshua met in 2012 and got hitched after knowing each other for three weeks — true love, wouldn’t you agree? 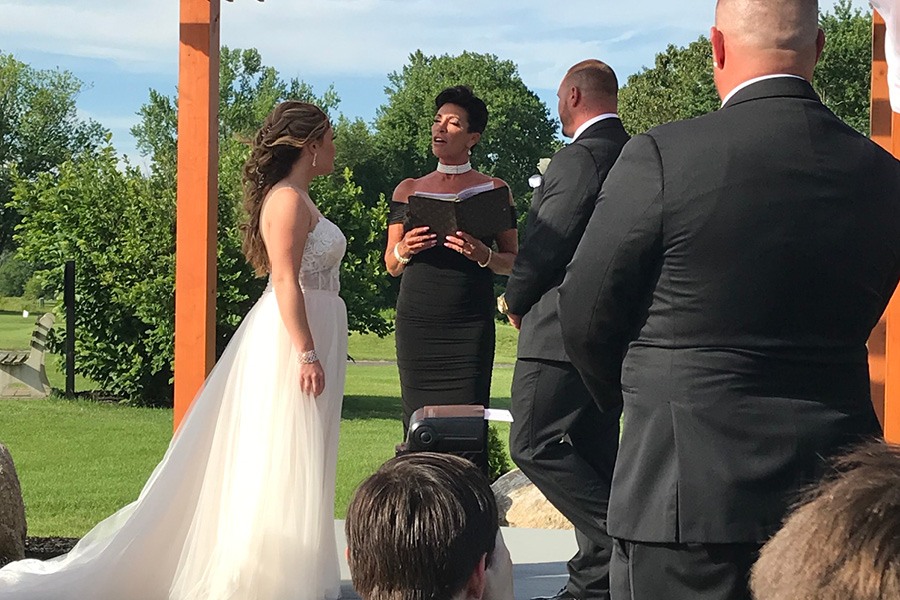 Susan Noles of Nuptials by Noles. Photo courtesy the officiant

Susan Noles has been in her role since 2011 when she was asked to officiate a couple’s wedding and fell in love with the process. She’s earned rave reviews since then from the couples with whom she works for her tenderness and care, and dedication to their wishes. Count on her to be well-dressed in crisp black or white (sometimes both) for your celebration, whether it’s nonreligious, religious, interfaith or nondenominational. She works with all duos and can help write personalized vows or samples from which to choose. As one couple dramatically said on Instagram, “amazing!” 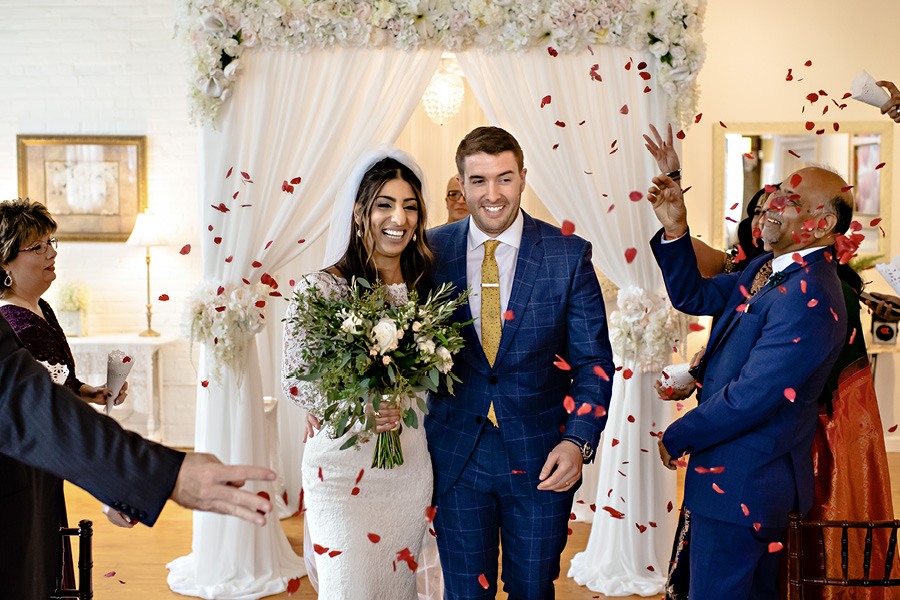 The sweet, intimate venue is run by officiant Stacey Thomas, who simply wants to help you get married. With space for up to 50, the chapel can hold intimate occasions for couples who want to keep it simple and focus on themselves. (Thomas already has components like decor under control.) Thomas has introduced Zoom ceremonies at the location for the foreseeable future, including a virtual toast with the couple (and their digital viewers). She’s promoting small outdoor weddings at a trio of places in the city for five to 10 guests. (Thomas also already offered off-site officiants.) And the chapel has introduced a Drop, Sign & Go component for couples to help get their licenses signed before they expire (for those facing postponements or complications due to coronavirus).