“We want the city to continue to create moments like this that will touch the world.” 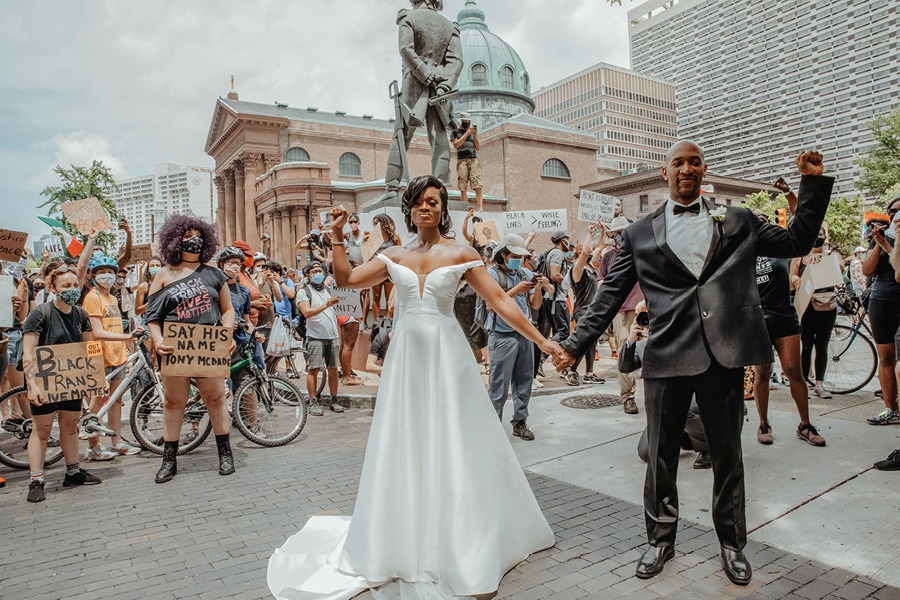 By now, you have certainly heard about Kerry-Anne Perkins, 35, and Michael Gordon, 42. The Montgomery County couple’s small, socially distanced wedding at The Logan hotel on June 6th intersected with a massive peaceful protest taking place on Ben Franklin Parkway. Their first look amid the crowd has become an iconic image on a global level, and has been covered in a variety of national outlets, including Vogue.

“We want the city to continue to create moments like this that will touch the world,” says Kerry-Anne, a staff surgeon at Alliance OB/GYN in South Jersey and a captain in the Army Reserve Medical Corps. “That’s really what Philadelphia is all about.”

She and Michael, a Navy veteran who works at Athena Global Advisors in Center City, had postponed their original wedding at Legacy Castle in New Jersey till next year due to COVID-19. They knew of the protests but decided to move forward with their micro-wedding at The Logan, spurred by the positive message of the rallies and their determination to be wed. “When Dr. Kerry-Anne notified me that her wedding would be at the exact time of the protest, I panicked,” says Rev. Roxy Birchfield, their premarital counselor and officiant. “I wanted this day to be just as perfect as a traditional wedding day. When I arrived early, helicopters were flying overhead and I was concerned that the ceremony would not be able to be heard over all the noise. But seeing Kerry-Anne and Michael in the middle of the protestors holding hands, fists in the air in support of Black Lives Matter and kissing during their first look, was the rainbow I needed sent from God.”

The couple first met at LA Fitness on City Avenue in 2013. They had their first date roughly two years later at Cuba Libre. Michael proposed in 2019, staging an elaborate plot that ended with a party in his home (now theirs) surrounded by friends and family, some who had flown in just for the special moment. “It was the first time he made me cry,” says Kerry-Anne. “The second time was at the protest. It was love: The love that day was amazing, and you recognize the love through action — for so many people and from so many people. I felt love.” Here, she reflects on the day, about a week afterward.

I still feel the high of the moment as I did when I went through it. But now I can see it from a third-person perspective. We were pretty confused originally. Now, we still feel like we’re living in a dream. But I think that reality has set in. We’re completely humbled, and there’s been an outpouring of love and hope. I’m amazed how two people who are strangers to the world can touch so many lives in a quick few minutes of time. It is a reflection on today’s technology and the revolution we’re undergoing.

We’ve been back once since then. We went with NBC to reflect on what it was like, where we were exactly and how it happened. It was crazy because I stood there, and we walked around, and I could see it playing in my mind again. As I’m looking out on the parkway, it was like I could see everyone. As I looked to the courtyard, it was like where we united as two people becoming one. In addition, people were walking around, and they said, “We were here with you Saturday.” This is how you know these are Philadelphians. They were telling us what it meant for them. It was good to get the perspective of someone else. People are still feeling the energy of that movement, love and excitement. It was completely unreal.

I am very proud of Philadelphia. It was a true representation of the City of Brotherly Love. We appreciate Philadelphians for their support. We appreciate the vendors. We found The Logan because that’s where I had planned my bridal shower. It popped into my mind because of its rooftop. I knew I needed an open space for folks to be comfortable. I went on the website and saw it was offering ceremonies at no cost in the courtyard for couples impacted by COVID-19. That’s just amazing [the hotel] would do such a thing. In such a hard time to be struggling during the pandemic, having protests near and far, people were offering time and creativity. It was an act of love and passion. The hotel gave us two dates, both on the weekend. The first was a week away, and the second was June 6th.

We planned for a small celebration of about 20. We both were going to get our original dreams. I wanted to marry on a lawn outside. (We couldn’t at Legacy Castle due to geese droppings.) Mike is getting his: Originally we were planning an elopement internationally, but his mother doesn’t fly. We were happy again to have that small, private ceremony that was very intimate.

The first flowers Mike got me were from Robertson’s Flowers & Events. [Ed. Note: The shop is also partnering with the hotel’s COVID offer and offering florals at a discount.] I know Robertson’s work; the flowers last forever. I love everything about the florist. Bri Crowley at Robertson’s is just the sweetest, most giving person. She went outside of the norm and helped transport things from our hotel to the ceremony site. I was thrilled that people in the time of COVID were offering so much and without reservation.

Our jeweler also played a role. We had gotten our wedding bands a week before the pandemic from Golden Nugget Jewelers. We initially had them made with our May wedding date. The store was closed for a while, and we sent an email explaining that we decided to elope within two weeks. The team told us we could come in; they’ll take care of the rings and re-engrave. They took such good care of us. We got travel bands and our parents’s jewelry from them. They know us by name now.

The Logan told us about the protests two days before. When I was watching all of the protests, my heart was there. It was part of the reason why we didn’t want to cancel our ceremony again. We were determined to have it, and I looked at the protests as a positive. Knowing I wanted to participate sunk in when I saw the protestors. I thought: “Even if I’m not marching with them, I want to see it, physically see it.” I was so excited, and even at that moment when I walked toward them, it was a feeling of wanting to be involved. We share the same vision.

It was a drawing together of energy. Magnetic. As I approached them, they were drawing closer to me. It really settled and lifted a lot on my chest and in my heart. I was feeling what they were feeling.

Once I saw Michael emerge from the crowd, I felt complete. I felt relief and complete. It was like history was lifting. There’s a lot of pain surrounding the movement. When I saw Mike I felt that sense of hope and love: There’s nothing we can’t do with the people surrounding us. That pain was turned into joy. When I felt the power of that change, I couldn’t help but cry.

As quickly as it happened, it ended. Once helicopters and protestors finished, it was peaceful bliss. Prior to that date we’d gone through the ceremony with Roxy. It was well thought out and put together. We didn’t even talk about the moment that had just happened during the ceremony. It was like they were two separate things. We went on as scheduled. It wasn’t until we had taken photos downtown that we had a brief discussion about it. We didn’t know the world knew about it. That was absolutely epic. No way we will ever forget about this.

Afterward, we went home with our guests to celebrate. Jamaican D’s in North Philly went into our house when we were at the wedding to set up. They just went above and beyond to get us food for our guests, takeout containers and individually sized products. By the time our guests left the courtyard, it was hot and ready to go.

To experience that peaceful protest in front of the world is a great thing. It really just tied in the love the city has that is not displayed much. So often people gravitate toward negative: Not enough attention is placed on the good that people naturally have. Sometimes it takes a moment like that to pour it out. It was the perfect avenue for that. And we just want to keep that going and support our locals: They need the love, especially in this moment. You can feel the burning desire for change, new life and new beginnings. If I were to put a message out there for Philadelphia, that’s what I would say.