The groom-to-be carried a fresh handkerchief in case his beloved started to cry when he popped the question. 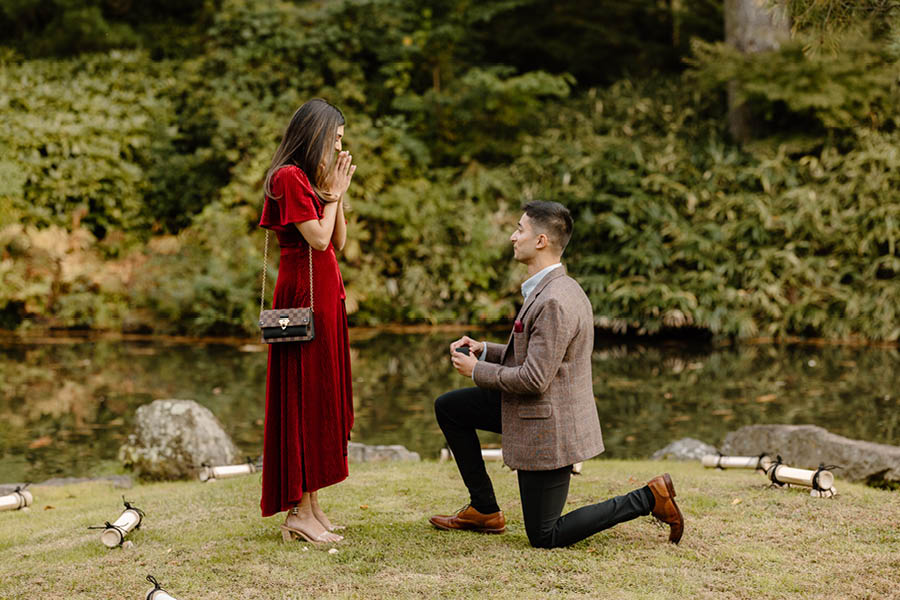 Proposal season is here again, and we’re kicking off our coverage with a beautiful, touching engagement at Shofuso Japanese Cultural Center. It was a perfect setting for this sweet couple, who had long loved the tranquil, peaceful surroundings. Photographer Jessica Plasha photographed the big moment below. And stay tuned for more proposal and engagement coverage in coming weeks! 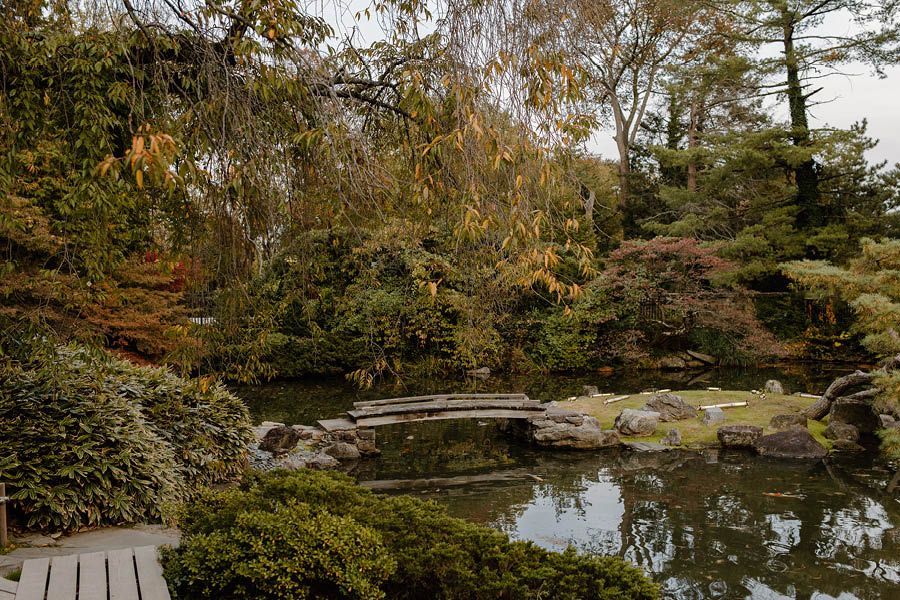 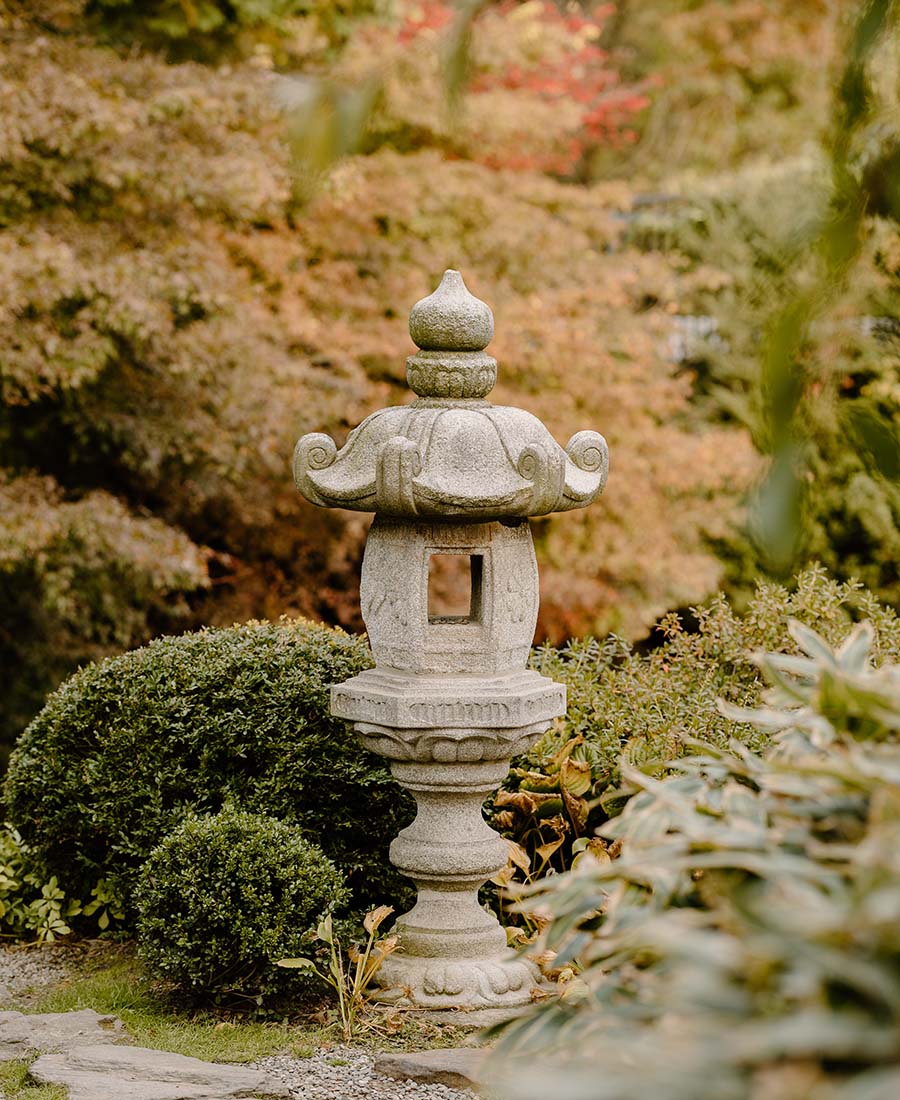 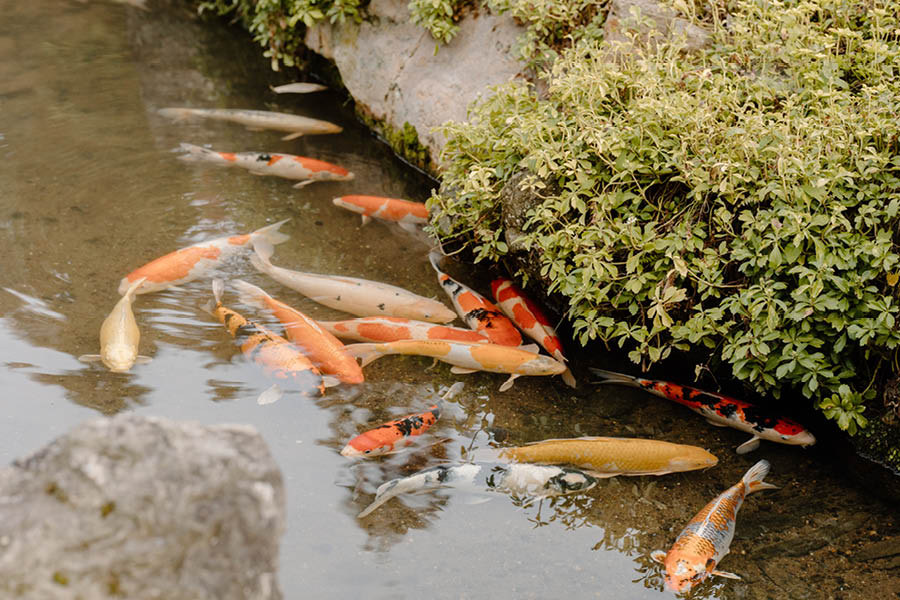 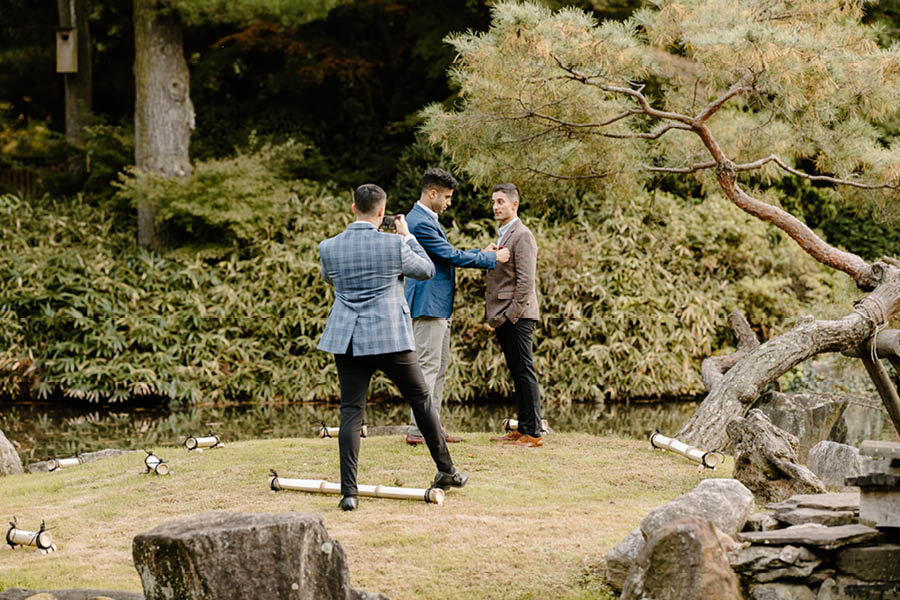 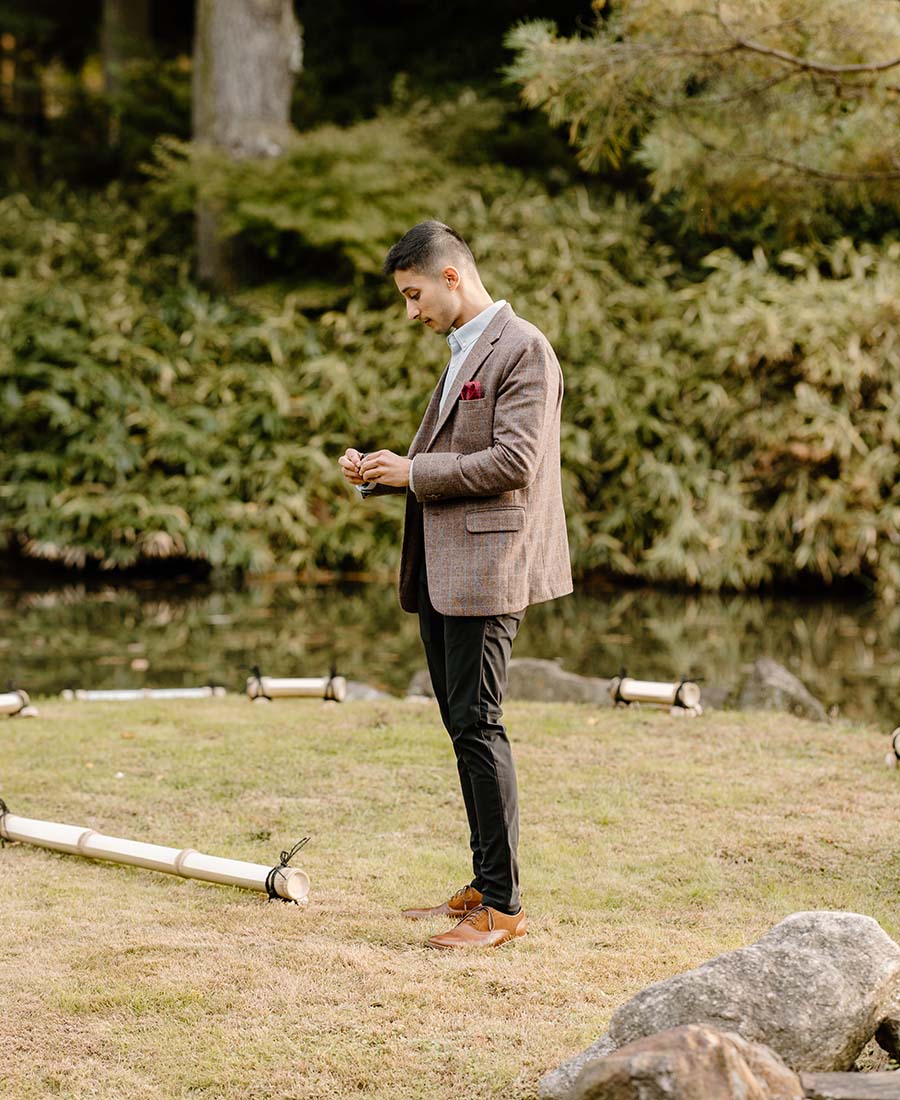 How they met: The future pair met while attending the University of the Sciences (now Saint Joseph’s University). They passed each other on campus a few times but never gathered the courage to say hi. “I think we were both nervous to talk to each other and didn’t realize we both wanted to meet,” admits Sonia. Even their friends thought the couple would be perfect together and had been trying to set them up. The two eventually connected at Harvest Seasonal Grill & Wine Bar’s former University City location in March 2016. Raghav bought Sonia a rum and coke with a lime — her favorite drink at the time — and the two spent their time talking and laughing.

The proposal location: The two dated for six years before Raghav popped the question in October 2022. But he had known since 2018 that the serene Shofuso house and garden in Fairmount Park was where he’d do it. The couple had visited the destination while they were in school and needed a quiet break from their studies. “We both loved the tranquility of the garden and watching the peacefulness of the koi fish,” says Sonia. 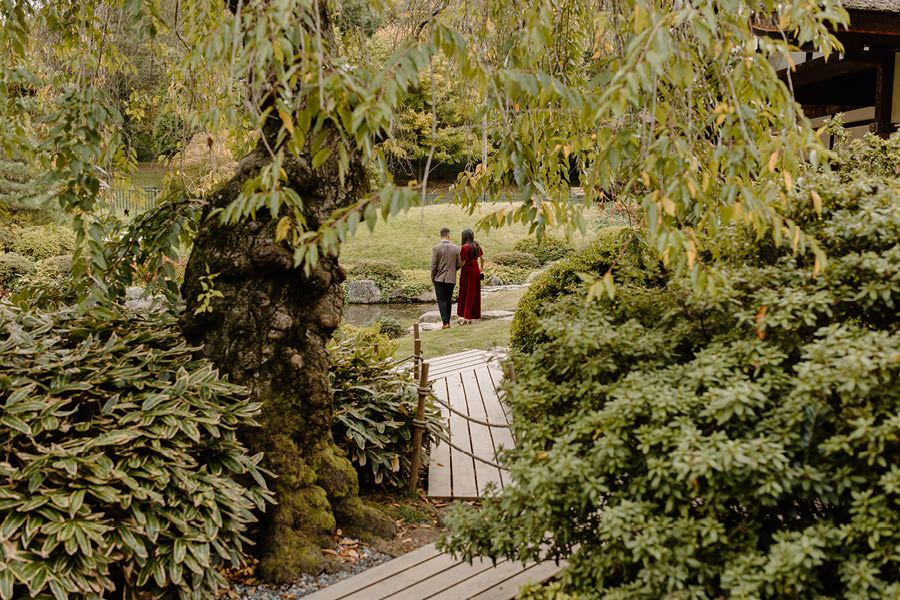 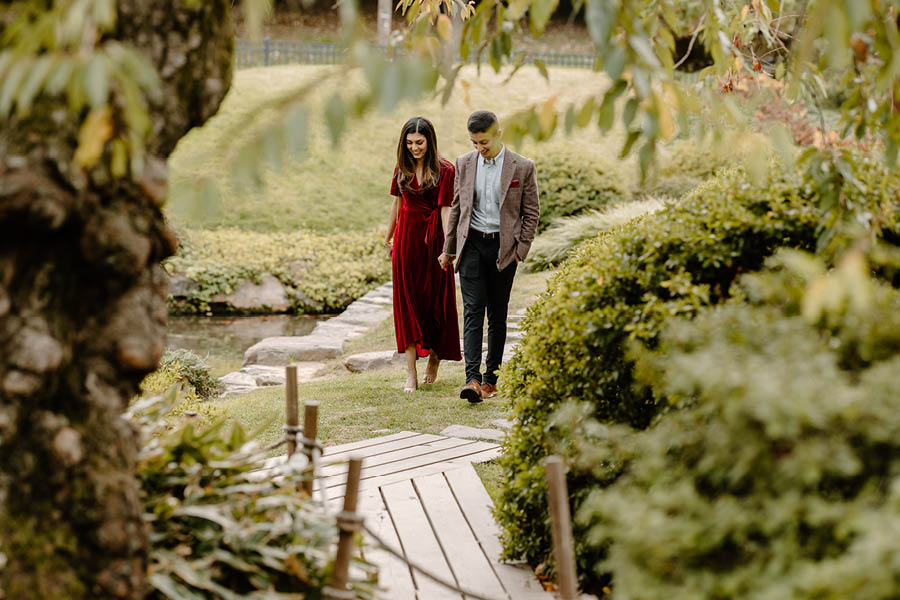 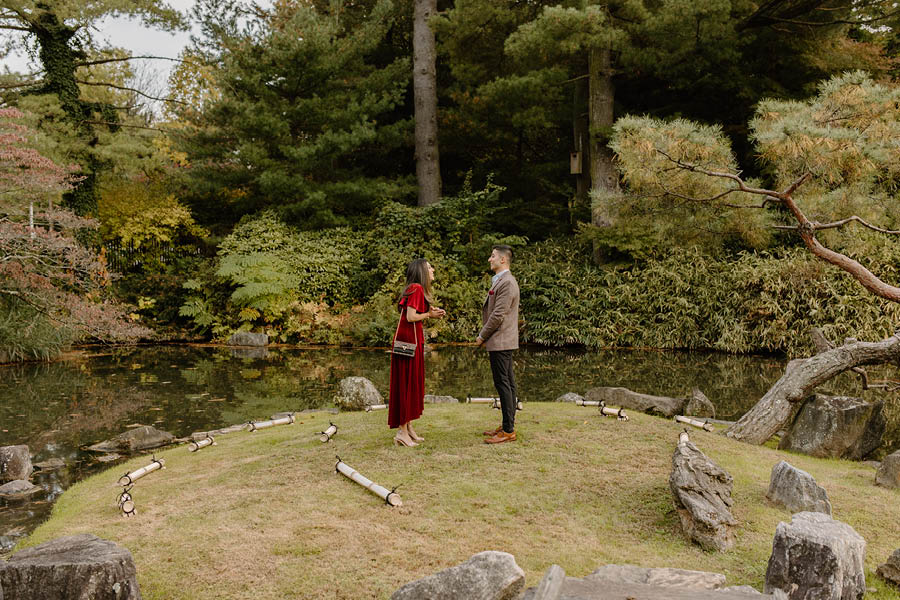 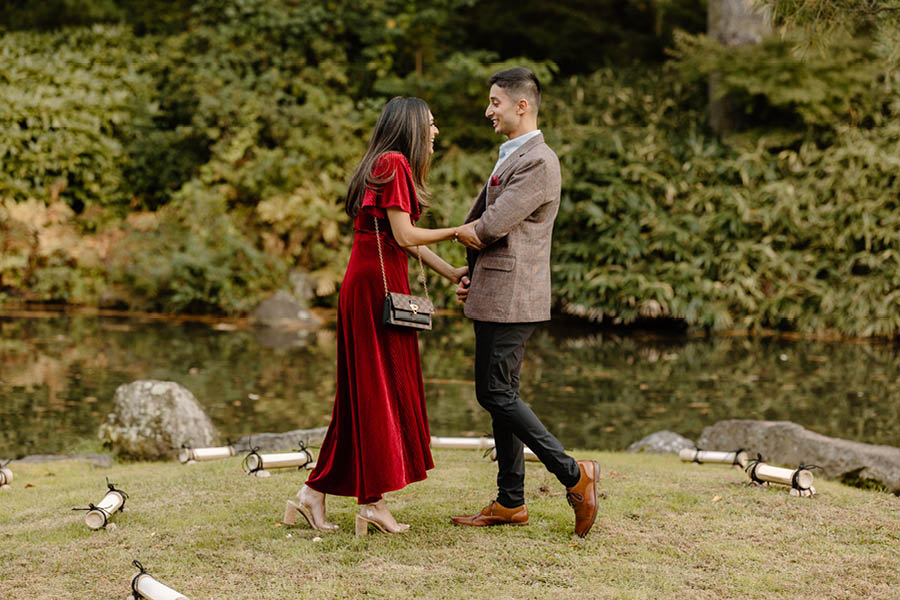 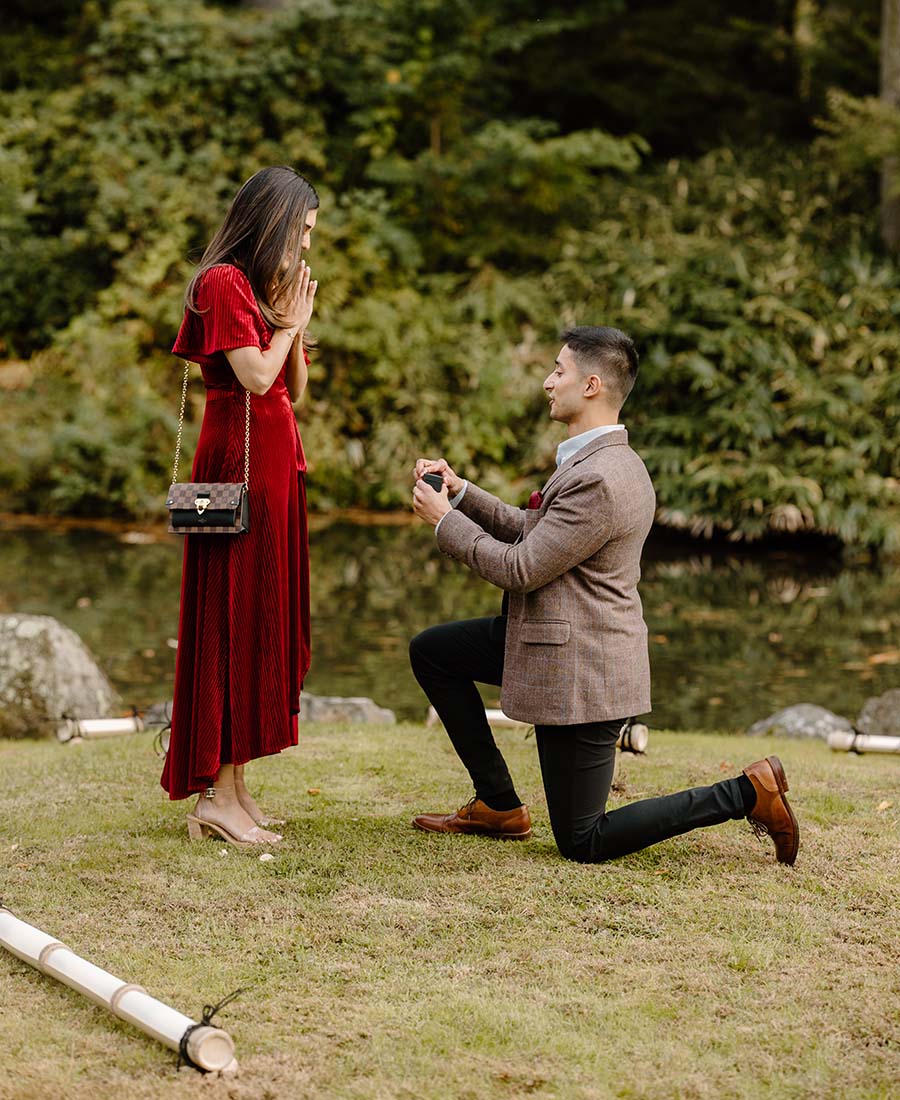 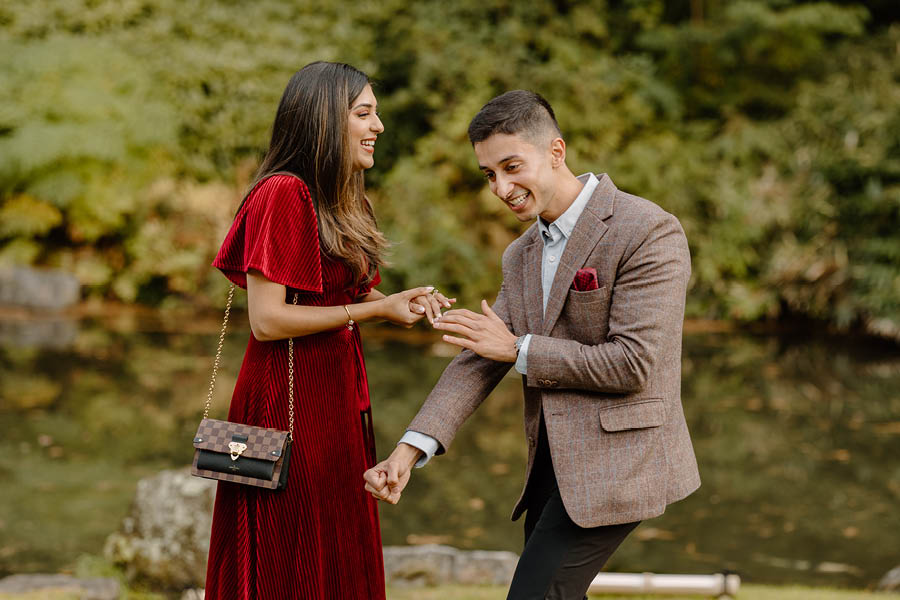 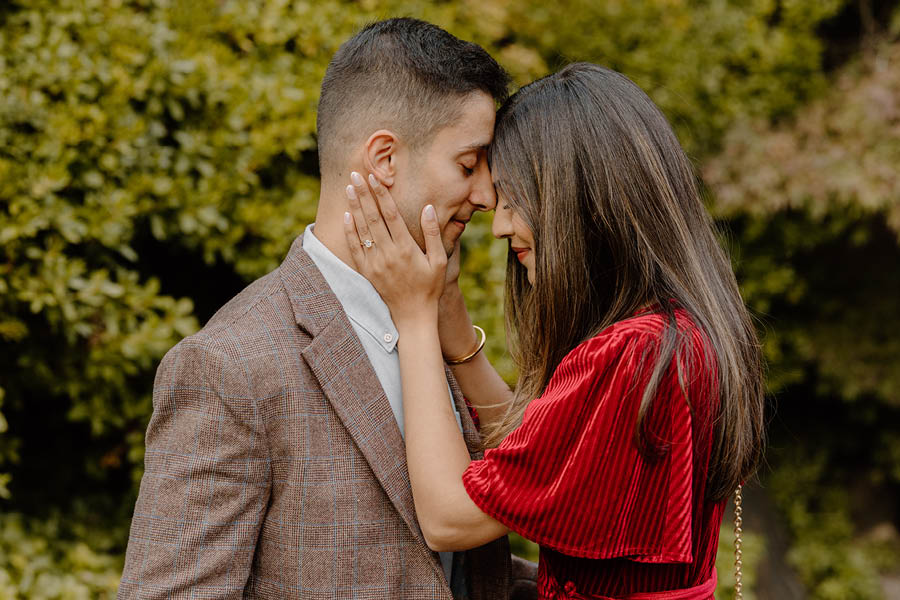 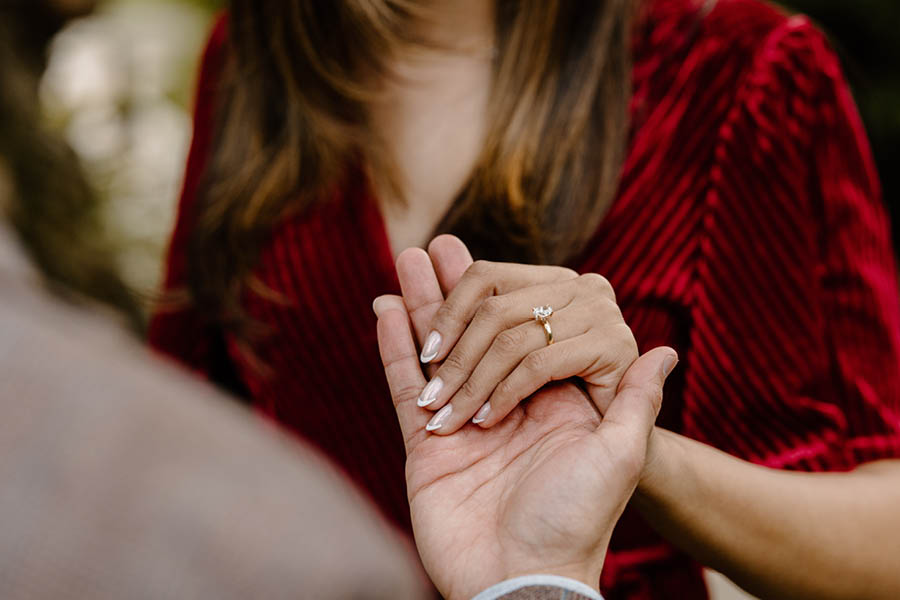 Family matters: Raghav admits he couldn’t have pulled it off without help from their families, who were in on his secret from the start. Case in point: A few months beforehand, Sonia’s sisters told her to take the day off for a “family dinner.” And when the day got closer, they started to ask her what she was wearing and hinted that she should get her nails done. “I figured Raghav was going to propose, but I didn’t know how it was going to happen,” says Sonia, who eventually settled on a velvet dress she’d ordered from Amazon.

The preparations: In addition to hiring their photographer, Raghav (with help from his brother and cousin) set the scene. He had selected an island surrounded by the koi pond for the special moment, and the group set up lighting to illuminate the space during sunset (the staff had informed him that the garden gets dark quickly in the fall). His wingmen also straightened his jacket and shared words of encouragement.

The proposal: Sonia’s parents and younger sister dropped her off at the garden. Her dad even walked her to the entrance and wished her good luck. Somehow, Sonia still wasn’t entirely sure what was happening. She saw Raghav when she walked in, and the two strolled through the garden. He eventually took her to a bridge leading to to the island. Once there, Raghav got down on one knee. 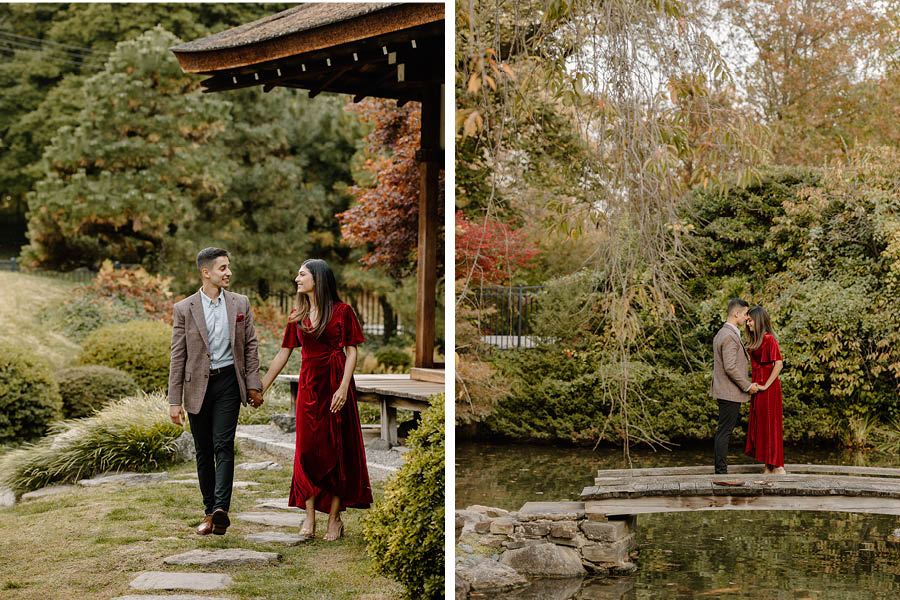 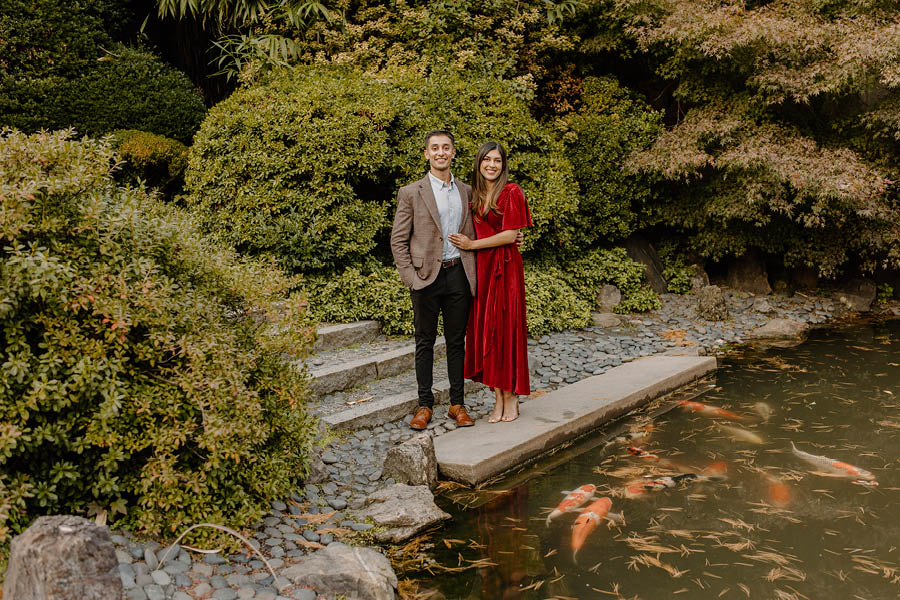 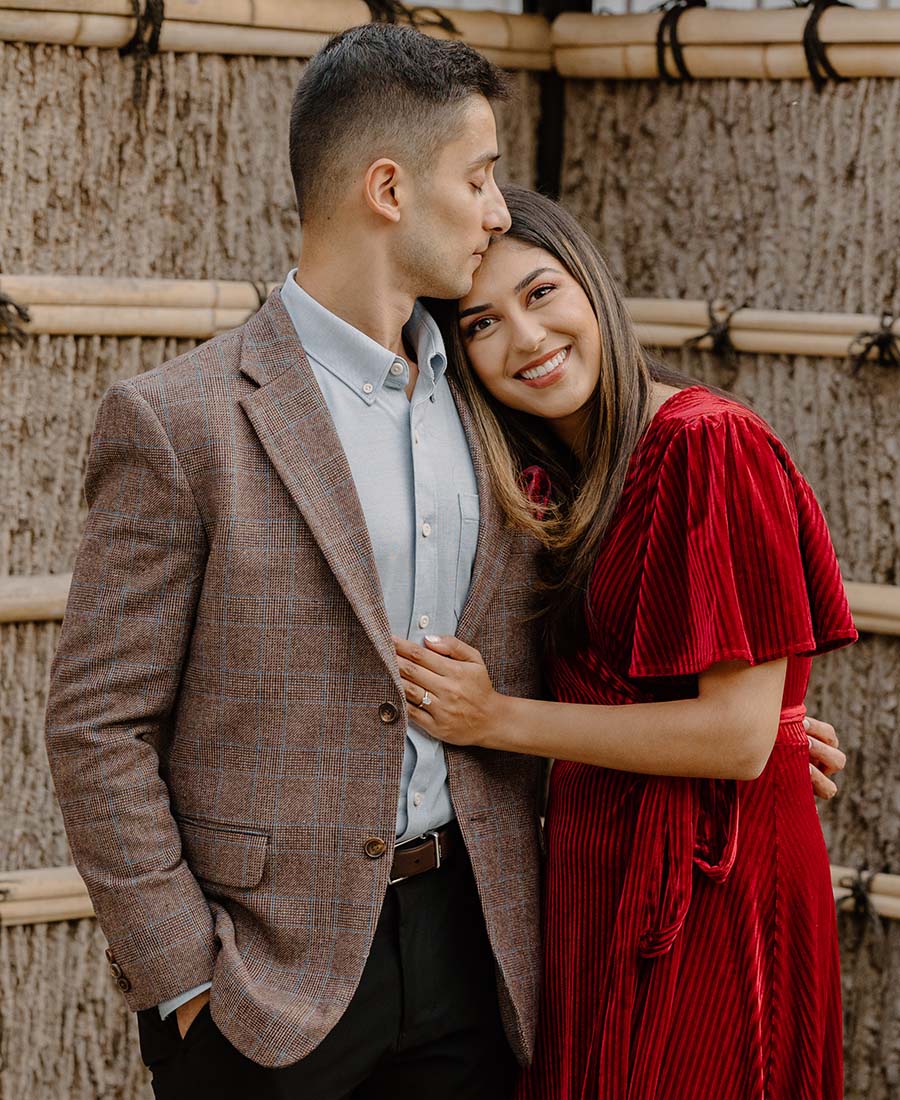 A sweet touch: Raghav carried a fresh handkerchief for his beloved in case she teared up and had also arranged for their family to join them once they’d shared quiet time together.

Sonia’s reaction: “I couldn’t have asked for a more perfect proposal that was simply ‘us,’” she says. “Family is so important to us and to have them involved meant the world. He planned everything so thoughtfully, and I felt like the luckiest girl in the world.” 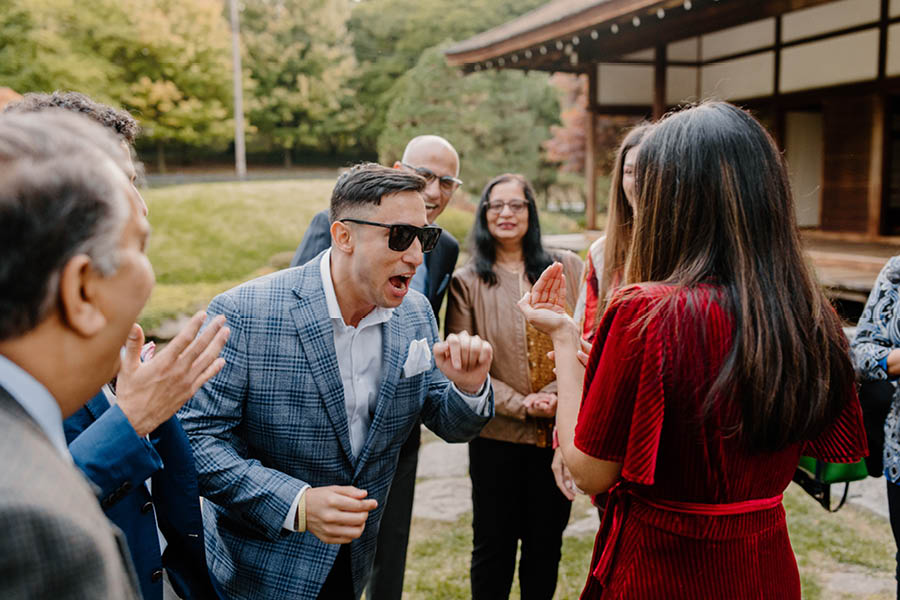 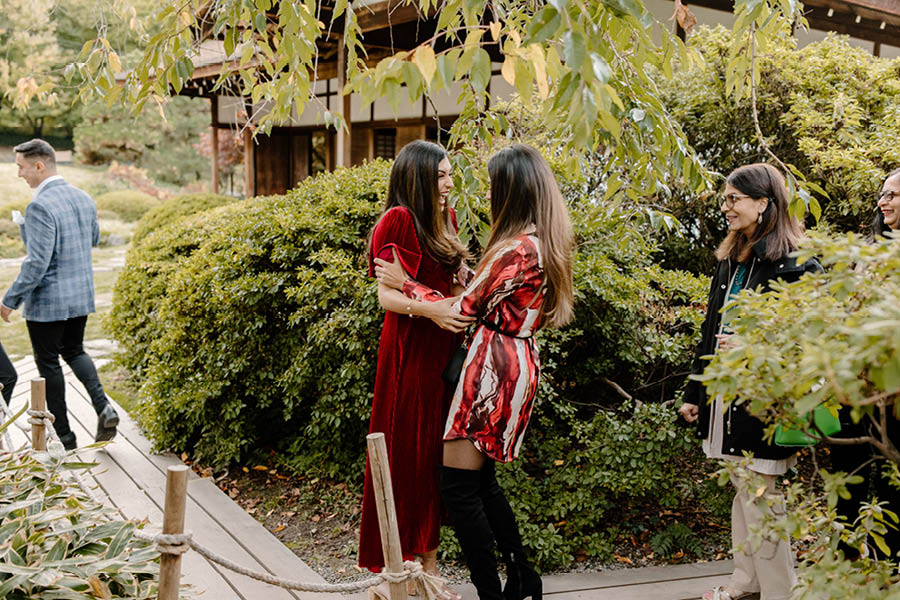 The post-proposal festivities: That wasn’t all from Raghav. He’d also arranged a dinner with their families and friends at Alimentari at Di Bruno Bros. “I turned the corner to hear ‘SURPRISE!!!’ and I saw everyone standing there to congratulate us,” recalls the bride-to-be. “I was shocked.” And after that? The party continued at Attico Rooftop. 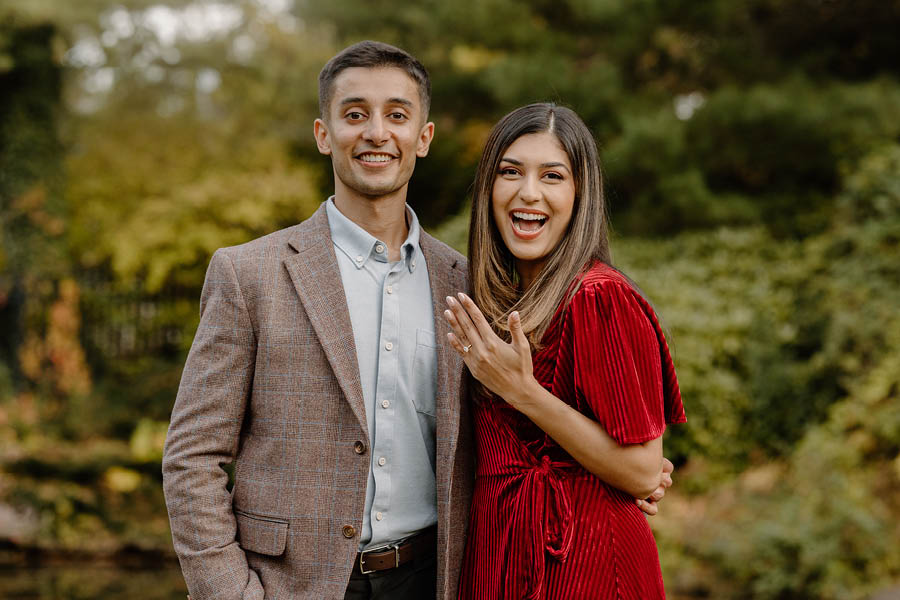 The wedding plans: While the couple hasn’t yet settled on a specific date or venue, they are looking at the spring or summer of 2024 for their Big Day.