And 24 degrees in the forecast? No thanks. 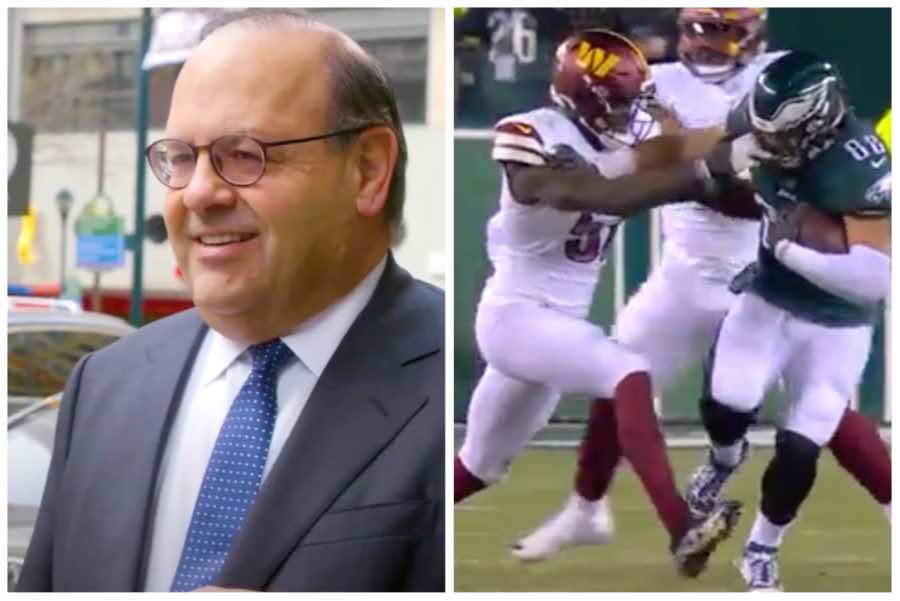 Left: Allan Domb, who is running for mayor of Philadelphia (via Allan Domb for Mayor campaign video) | Right: The obvious face mask penalty perpetrated by the Washington Commanders against the Philadelphia Eagles (screenshot via Twitter, embedded below)

We all knew this was coming. And on Tuesday morning, the so-called “condo king” of Philadelphia made it official. Allan Domb is running for mayor.

The other people running for mayor of Philadelphia made their announcements via Twitter and other social media platforms.

But when your name is Allan Domb and you own a huge amount of real estate in Philadelphia, you do things a bit differently.

You release an oh-so-professional campaign ad:

Things I learned about Allan Domb during my February interview with him:

For more, read: Why Allan Domb Decided to Jump Into the Messy World of City Politics.

So if you’ve lost track, here are your 2023 Philadelphia mayoral candidates, as of this moment:

The first four being former City Council members. The last being our former city controller. They all had to leave office thanks to Philadelphia’s resign-to-run law.

Another rich white guy is expected to announce this week.

I’ll Say It Again: Don’t Bring Your Loaded Gun to the Philadelphia Airport

Apparently, a certain Collegeville man isn’t a regular reader of Philly Today. Because, if he was, he would have seen my story last week about Philly rapper Tierra Whack getting arrested for bringing a loaded gun to the airport.

According to the TSA, the unnamed Collegeville fella had a .380 caliber handgun in his carry-on bag. And inside the gun? Seven bullets, including one in the chamber.

If you’re keeping track, that’s 39 guns so far this year at Philadelphia International Airport TSA checkpoints. The TSA found 39 guns during the entirety of 2021, the most in five years. So maybe leave your (unloaded) guns in your checked luggage the way you’re supposed to so we can not break that record.

Is That 24 Degrees I See In the Forecast?

Yes, yes it is. See you next spring.

And From the Revenge-of-the-Turds Sports Desk …

Where to even start with that Eagles vs. Commanders mess last night? “I guess we won the toss again. I don’t remember the last time we lost a toss,” my husband said as we settled in to watch the game. Way to doom the team, Doug. It all looked so good for the first few minutes, though! Washington was called for holding on their initial punt return, sending them back to the eight-yard line. They couldn’t get anything going and punted, but Eagles rookie Reed Blankenship roughed the kicker, and the Commanders got the ball back. The Eagles then sacked quarterback Taylor Heinicke, and he fumbled as Josh Sweat knocked the ball out.

Josh Sweat gave the Eagles some great field position with this strip-sack.

Marlon Tuipulotu recovered, and Jalen Hurts ran a quarterback keep for the Eagles TD. At just 12:21 in the first quarter, it was 7-0. Alas, Jason Kelce was limping. Bad sign.

The NFL’s Ross Tucker is a local lad, and he knows where the goodies are buried at the Linc:

Enough to bring a tear to my eye. pic.twitter.com/Ir5FfVrUtd

Meanwhile, Washington scored a TD to even the score at 7-7. After the Eagles took possession, Ben St.-Juste was called for pass interference on a LONG pass from Hurts, and we were on the six. Dallas Goedert caught a TD pass and heaved a mighty spike, and then the receivers held a lil’ celebration.

It was 14-7, and everybody but the Commanders was having fun at the end of the first quarter. Special non-sports bonus: The Arizona governor’s race got called for Katie Hobbs. What a great night so far! See ya, Kari Lake!

And then it all went to hell. Hurts threw a pick on a long throw to A.J. Brown in double coverage. A flag on the play was called back, then that call was reversed to let the play stand. It was Hurts’s first interception of the season and ended the longest no-interception stretch in the league.

Marcus Epps had a great breakup of a pass, inspiring Joe Buck to say, “It’s hard to throw the ball against this Eagles secondary,” which naturally led to a 23-yard Heinicke pass to Curtis Samuel. That was followed by a bad snap that sailed over Heinicke’s head, but somehow he managed to scoop it up and throw it away, preventing a 23-yard loss. Washington receiver Terry McLaurin was having a monster night. After a touchdown by Brian Robinson Jr., it was 17-14 Commanders. That made three straight scoring drives of six-plus minutes for the enemy.

We got the ball at the 25 with 1:39 left in the first half. That was when Kenneth Gainwell dropped a Hurts pass, A.J. Brown slipped and fell, and it was fourth-and-five and we were punting. The Eagles seemed lost against the Washington running game, which occasioned the most lopsided time of possession against the Birds since 2001. With two seconds left in the first half, Joey Slye matched his longest-ever field goal at 58 yards. The Commanders had a six-point lead.

The second half started out ugly for the Iggles with a three-and-out. On WIP, the radio guys said Philly looked like a team that hadn’t played in 11 days, which — well, they hadn’t. Carson Wentz was grinning on the sideline. McLaurin snagged another pass just short of the first down, and Heinicke went right back at him with a 42-yard pass to the 16.

The third quarter was the Miles Sanders show as the Eagles teased us with a little traction. After they held the charging Commanders to a field goal — 23-14 — the offense settled in behind Sanders’s running game. He hadn’t had that many touches in a game all season. DeVonta Smith scored a TD on a pass from Hurts to cut the Commanders’ lead to 23-21. On Washington’s next possession, C.J. Gardner-Johnson got called for a late hit that wasn’t, everybody but the refs agreed, and promptly intercepted Heinicke in retaliation.

C.J. Gardner-Johnson with his NFL-leading 6th INT. Earlier personal foul was kind of ticky tack, but the #Eagles safety makes up for it with a huge turnover on 3d down.

But on a run by Goedert, the ball came out, and the Commanders’ Jamin Davis recovered the fumble for a touchdown. Replay clearly showed a flagrant face-mask foul by Davis that everyone but the referees saw.

He fumbled because he was getting his eye gouged and his neck ripped off! #Eagles #MNF

The play came under review, but the miss on the face-mask foul couldn’t be remedied. Even the commentators were protesting:

Great example why everything should be reviewable/able to be challenged.

Unfortunate in an otherwise awesome game.

The Eagles started another drive, and at first and 20 at the 37, Hurts hurled a monster throw to Quez Watkins, who made the diving catch, got up to run, and got hit. Naturally, the ball popped out, and Washington picked it up. The Linc went quiet. Boy, the fans looked pissed.

At the two-minute warning, with the ball in Washington’s hands, the Eagles were using up all their timeouts in desperation. Heinicke took a knee to avoid a slam, and there was a flag on the play: personal foul on Brandon Graham for a late hit. It was NOTHING! It was like a gentle kiss!! Graham was on his knees sliding, clearly trying to hold up. Oh, the unfairness of it all!

What a terrible way for the unbeaten streak to end. The Eagles even blew the last-minute lateral parade, losing the ball to the Commanders, who returned it for a touchdown. That was it: 32-21 Commanders. Man, what a sucky game.

In other news, despite lagging behind for the entire first half, Villanova managed to come back and beat Delaware State, 60-50. The Wildcats are out of the AP top 25 for the first time since 2019. Go teams.