Once content to merely rake in millions on his condo development empire, the businessman has successfully emerged as a major political power player on City Council. Will he run for mayor? 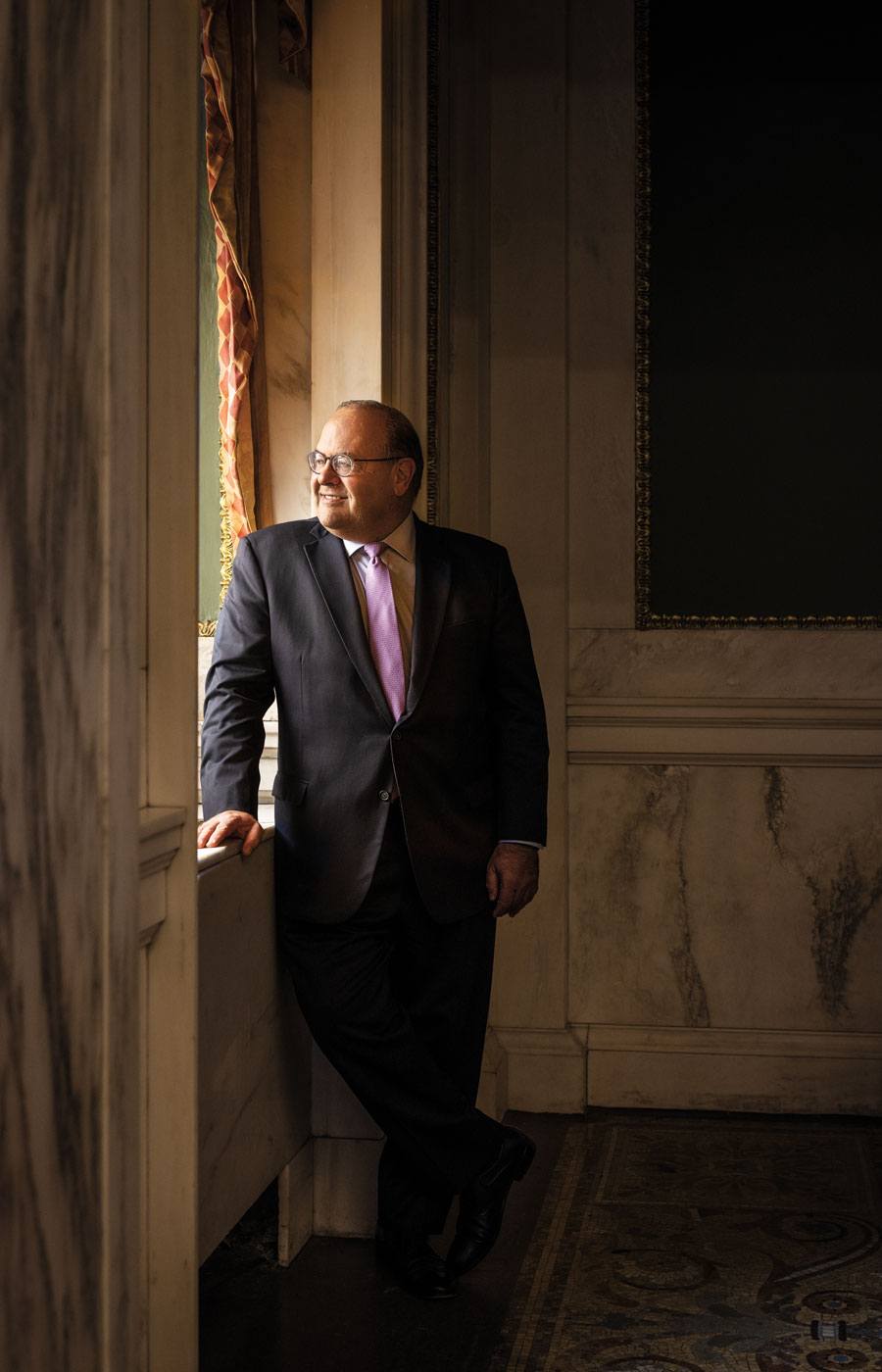 Update 8/15/2022: Allan Domb is resigning his seat on City Council on Monday and is considering a run for mayor.

He bought his first piece of land when he was just 12 years old and went on to become the “condo king” of Philadelphia — a title he’s not too fond of. Then Allan Domb decided to dive into the dirty world of Philly politics. Here, he talks 18-hour workdays, streeteries, and why you shouldn’t assume he was born with a silver spoon in his mouth.

Hello, sir. Do I call you Allan? Al? Councilmember? Or your legal name, Michael?
[Laughs] Allan is fine. I actually didn’t know my legal name was Michael until I was 17 and wanted to get my driver’s license. I needed my birth certificate, and there it was: Michael Allan Domb. It turns out my father wound up not liking the “Michael” because my initials were then M.A.D., so my parents called me Allan and never told me all that time.

Okay, so, Allan, I heard through the grapevine that you weren’t the biggest fan of our November cover story, “The 76 Most Influential People in Philadelphia.”
That would be correct.

Most people who have complaints about that package are upset that they aren’t in it, or about some of the people who are. Like, how did a restaurant publicist make the cut? But you’re actually on the list.
True.

I’m guessing it’s the language we use in the write-up about you: “Domb hasn’t kept pace with the bloc of progressive Councilmembers who’ve had more success turning their ideas into law.”
It’s just inaccurate. For one example, one of the most progressive things I’ve done is pass a wage-tax bill that was actually based on research and analysis. We did research and found that of the top 50 U.S. cities, Philly taxes the lowest-income people the highest: 18 percent. That’s really sad. So we came up with a wage-tax refund for lower-income people. This is getting checks into the hands of about 100,000 people living in poverty.

What do you know about poverty? You own hundreds of millions of dollars in Philadelphia real estate.
Victor, when I was a kid in Fort Lee, New Jersey, my family lived in an 800-square-foot apartment. When I was four, I was shining shoes for 25 cents a shine at a bus stop outside our apartment. When I was 11, I had not just one but two paper routes. When I was 16, I was a janitor four days a week. Then I became a dishwasher. Then a short-order cook.

So you clearly didn’t come from money.
No, but I saved my money. My grandmother used to take me and my brother to the store and say, “You can buy anything you want for $10.” And I used to ask her if I could just have the $10. I saved and I saved and I saved. And when I was 12, I bought my first piece of real estate.

Wait. At 12?!
This real estate broker came to our apartment to convince my mother and father to buy a piece of land in Palm Coast, Florida, for their retirement. And when he was on his way out, I asked him if I could buy some. I convinced my grandmother to co-sign for me — my parents were so mad — and the monthly payment was $142.

Tell me you still have that land.
When I was 22, some real estate person called me and asked if I wanted to sell it for $25,000. I said sure. After all, I paid $10,000. I thought $25,000 was just great. Today, that piece of land would be worth at least $500,000. It’s right off the Intracoastal Waterway. What a mistake. But I learned a valuable lesson: Never sell real estate that’s in a great location.

How did you come to be the “condo king” of Philadelphia?
First of all, I’ve never called myself that. Other people, including your magazine, used that. But I came to Philly in my early 20s to be a salesperson for a time-lock service. And at the end of 1979, I heard Jay Lamont on WPEN. He had a radio show all about real estate, and I decided to get my real estate license. 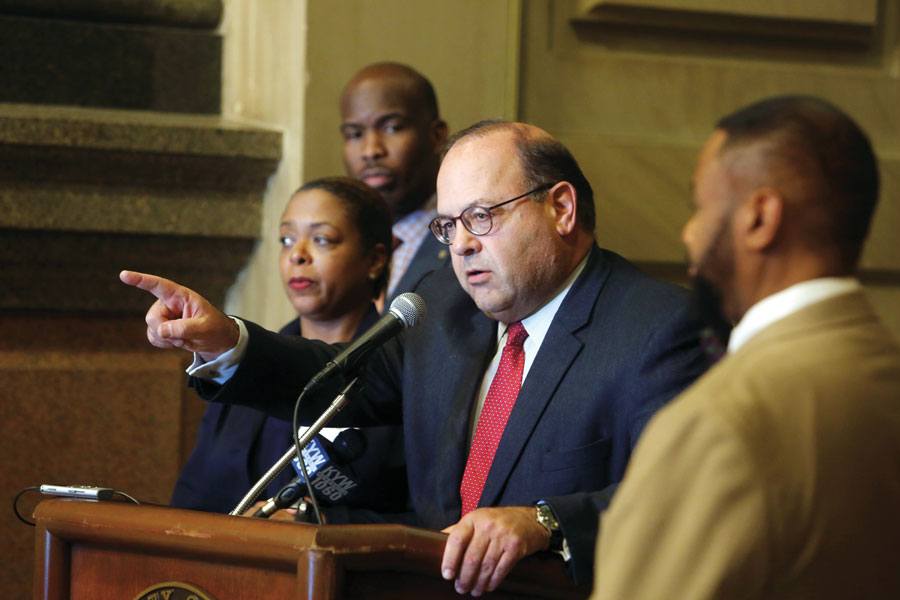 Allan Domb gets to the point at City Hall in 2017. / AP Photo / Jacqueline Larma

You grew your real estate portfolio into what it is today and then for some ungodly reason decided to get into politics. Why on earth did you run for Council in 2015? Just bored?
Not at all bored. It was maybe 10 or 15 years ago when I learned a Winston Churchill quote that went something like, “You make a living by what you get, but you make a life by what you give.” I came here with zero. And I decided it was time to give back.

During your campaign in 2015, you said you would collect taxes from out-of-state landlords and use that money to fund schools. Did that happen?
We’ve made tremendous headway. When I came into office, the collection rate was about 90 percent. Where was the other 10 percent? So I went to the revenue department, and we invoked a process known as sequestration. And it worked. You go to delinquent landlords and say, “You haven’t paid your taxes in two years, so we are going to tell your tenants to direct all of their rent payments to the city.” You know what happens when you do that? The landlords pay their taxes. Pre-pandemic — the latest numbers we have — show us at 98 percent.

You also talked about job training for young people. Where does that stand?
I want all kids from ninth to 12th grade to have the opportunity to work one day a week and get paid for it — and also get school credit. What a great way to get them off the streets and working and on a pathway to the right track. Think about this labor shortage we have. We have so many students who could fill those jobs.

My son, who is 15, has been working in a restaurant kitchen for almost a year. He loves it. And he loves that he’ll have enough money to buy a used car when he’s able to drive. He’s a saver, just like you.
I need to talk to your son before he buys that car.

Oh?
You tell your son that as soon as he buys that car, it goes down in value. You can buy things that are like butter — ­they melt — or you can buy things that are investments. Clothes are butter. Going out to eat is butter. What people need to learn is to invest early in life, and when they’re older, they can enjoy all the butter they want. This is something I’ve been trying to make mandatory in Philadelphia for all public-school students: financial literacy from kindergarten through 12th grade. Somebody in Haverford just told me that their kid in fourth grade is learning financial literacy in school. We need this in Philadelphia! It’s such an important skill set.

Switching gears: You’re a big Philadelphia booster. But with all of the headlines about murder each and every day, how do you convince people to visit here, raise kids here, and do business here?
The lifestyle of the city is unique. We’re still a city of neighborhoods, and we have so many great restaurants all over the city, no matter what neighborhood you’re in. We’re also one of the most affordable cities in the country. There’s great accessibility to New York, Washington, the Jersey Shore. And what amazing educational institutions we have here.

Okay, but about that murder epidemic.
City safety is my number one concern. Every night, I’m watching someone else get killed. It’s gut-wrenching. The city invested $155 million to fund anti-violence­ programs, but this is all meaningless if it doesn’t produce results. I just called for specific and intentional investment into utilizing and evaluating tools and having ongoing accountability based on outcomes. We need to double down on evidence-based programs. We need to work with all law enforcement — from the FBI to police to the DA — and local universities in a collaboration to put funding into what does work.

What has surprised you most about the way City Council operates?
The need for compromise. Take, for instance, my streeteries bill that recently passed. That was the result of a lot of compromise.

How so?
Well, I wanted every restaurant in the city to be able to have a streetery. But I couldn’t get enough votes for that version, so the new version you now have covers about 65 percent of the restaurants that currently have outdoor dining licenses. Is it better to get zero or 65 percent?

I think this would be a good place to note that you’re a major investor in all of Stephen Starr’s restaurants as well as other popular spots — and those restaurants just happen to be in the “approved” area.
Let me say this. In any decision I make, I only have one focus: What is best for the city? Not what is best for me or my investments. In my streetery bill, streeteries can only exist in parking zones. Many had been set up in traffic lanes. But no more. So guess who loses their traffic-lane streeteries? Stephen Starr restaurants like the Dandelion, the Love and El Vez. Believe me, a lot of restaurants are upset with me over that.

Whenever I have a conversation about Jim Kenney’s successor, a few names always come up, including yours. You could get more done as mayor. You have the money to finance a campaign. So what of it?
All I can say right now is that I’m staying focused on doing my job as a Councilmember and continuing to push for the city to be the best it can be. And when it makes sense for me to consider all my options for how to do that, that is when I’ll consider them.

How do you find time to serve the people who elected you when you’re so busy with the other side of your life as a developer?
I’m really not personally doing development these days. I stopped doing that so I could focus on City Council. I spend the bulk of my time on Council business. I start working at 5:30 in the morning, and I don’t stop until 12 at night. People say to me all the time: “What do you do for fun?” You know, I actually like this.

Published as “On the Record” in the February 2022 issue of Philadelphia magazine.