Another blow struck against 2020's poster child for police brutality in Philly. 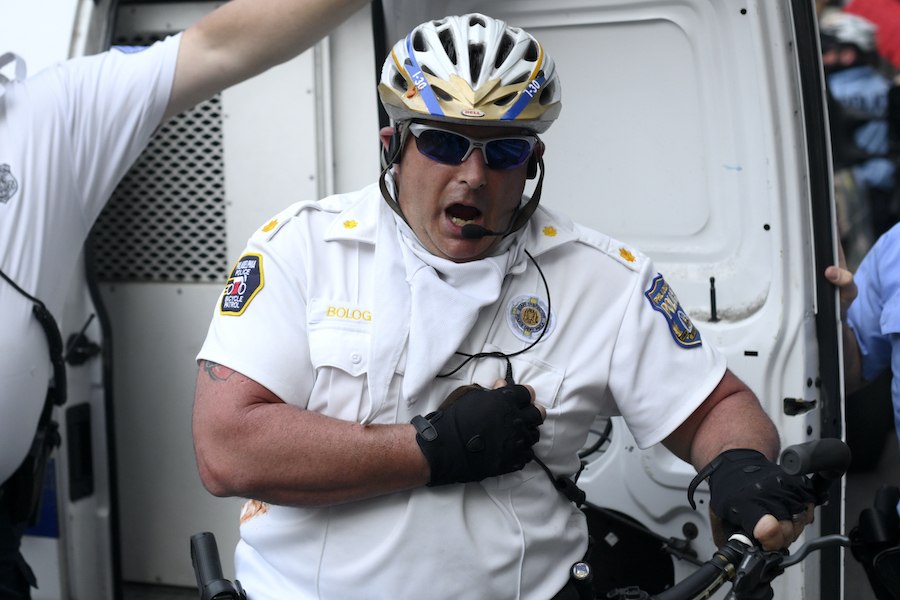 Joe Bologna, who, along with the Philadelphia police department, is the subject of a new federal lawsuit, as seen in Philadelphia in June 2020 (Getty Images)

Twenty-one-year-old Cayley Cohan of South Jersey has filed a federal lawsuit against former police officer Joseph Bologna, police officer Lezlie Winters, and the City of Philadelphia over a violent encounter she had with Bologna on June 2nd of 2020 during the protests in the wake of George Floyd’s murder. The encounter was caught on video.

You likely know Bologna’s name from a different incident last summer, when a cell-phone video captured the 30-year veteran of the Philadelphia police department hitting a protester in the head with a baton. That footage went national, and District Attorney Larry Krasner filed criminal charges against Bologna in a case that’s still winding its way through the courts. Naturally, Philadelphia police union president John McNesby stood by his man, even selling “Bologna Strong” t-shirts for $20 a pop. Police Commissioner Danielle Outlaw suspended Bologna with intent to dismiss, and on Monday morning, a police spokesperson confirmed that Bologna is no longer on the force.

The incident at the center of the federal lawsuit took place at the corner of 10th and Market streets. According to her lawsuit, Cohan brushed her foot against Bologna’s front bike tire and kept walking. Bologna allegedly grabbed her, saying, “Don’t touch my bike.” Cohan responded by saying, “Fuck you, I didn’t touch your bike.”

Cohan claims that Bologna immediately tossed his bike aside and tackled her, resulting in cuts and bruises. On top of that, according to the suit, Cohan had just broken her wrist a few days earlier and was wearing a cast under her sweatshirt. During the ensuing arrest, the cast was removed, and Officer Winters intentionally made the handcuffs extra-tight on Cohan’s wrist “for the purposes of hurting and punishing her,” the suit alleges.

Philadelphia police then transported Cohan to a holding facility, where she says she was repeatedly denied water for hours even after vomiting twice due to dehydration. Cohan was held there for 19 hours before being transferred to another facility for 17 hours and finally charged and released.

The suit goes on to claim that Winters gave a false statement to her supervisors in the Philadelphia police department to justify the officers’ treatment of Cohan on the street, allegedly saying that Cohan kicked her repeatedly, spat on her face, and kicked Bologna’s bike multiple times.

Krasner’s office charged Cohan with aggravated assault, simple assault, and disorderly conduct, but once his office got hold of video of the incident, all charges were withdrawn, according to the lawsuit.

The suit accuses Bologna and Winters of violating Cohan’s civil rights by using excessive force. It also details a long history of similar allegations against Bologna, arguing that the city “encouraged” and “tolerated” patterns of abuse by him. Cohan is seeking unspecified damages.

Neither the Philadelphia police department nor the City of Philadelphia comments on pending litigation. Bologna’s attorney wasn’t immediately available for comment.