In 2020, West Philadelphia Was the Best Place in This Terrible World

My neighborhood is committed to the American city despite the continuing problem of American history, profoundly welcoming, community-minded, and thirsty for justice. 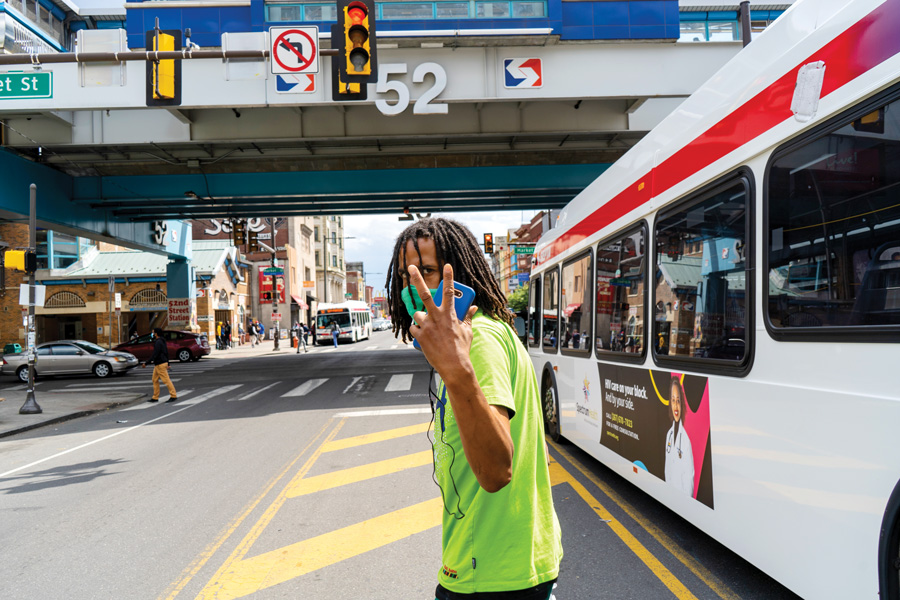 A man gestures to the camera while crossing the street near the 52nd Street El station. Photograph by Drew Dennis

On Saturday, November 7th, in the annus horribilis of 2020, I stood in Clark Park and declared West Philadelphia the best place in this terrible world.

Earlier that morning, I was in my bedroom, opening windows to take in the unseasonably warm day, and as the neighborhood erupted in hooting, I got a text telling me that the election had been called. I took my eight-year-old and his best friend down to the park to get into the mix. “We are literally living in history!” my son cried as we headed down Baltimore Avenue. It wasn’t the first time he’d said that in our year of quarantine and of young boys actually washing their hands, but finally, history meant something entertaining. The streets were crowded with people banging pots with spoons. We passed a dreadlocked man in a biblical-style flowing garment who was waving something that looked like a palm frond and screaming, “THANK YOU, JESUS!” The park featured dueling bands and a second-line situation. Black men driving sanitation trucks honked in celebration. After we left, I heard, the black cowboys rode in, and folks popped champagne to share with strangers.

That afternoon, we drove to Center City on an errand, and to check out the festivities there. Along the route we traveled, there were none. When I was growing up near the 52nd Street El stop, I kept downtown in my mind as an Emerald City, the thing that made Philadelphia a real place. As money that once flowed out of the city has returned, Center City has become an increasingly stark juxtaposition of obscene wealth and abject suffering. On that November day, when it looked like nothing special was happening, I felt West Philadelphia, home of epic and eccentric Black stories, more keenly as my home of choice.

I was lucky in 2020. My pandemic has been characterized by terror, grief and exhaustion but little genuine drama. The day after schools closed, one of my children aimed the porch swing at another and broke a pane of glass on the porch enclosure. A bird tried to fly through the hole, cut itself, and bled out on the table where we sometimes put glasses of wine. Things proceeded badly from there, but through it all, West Philadelphia has held me down.

Shout-out to the block parents who convened “recess” for our kids, out of school for weeks last March. Shout-out to my mother, father and sister, who walked over frequently and sat in front of our house on the rusty folding chairs we store in the alley, and to my cousins just for living nearby; the fact that we could visit on porches or bump into each other buying loaves from the carrot-cake man at Lee’s Deli made me feel both less trapped and less untethered.

Shout-out to the Woodlands cemetery, the beautiful, historic green space I’d always been too lazy and whiny to visit. In the beforetimes, I went to movies and restaurants. Now, whenever I could flee, I walked a loop through gravestones and monuments, listening to the melancholy Jay Electronica/Jay-Z album, then Fetch the Bolt Cutters, and then crime-novel audiobooks about racist Texas towns by writer Attica Locke, ambulance sirens always blaring in the distance. I stopped to visit graves. RIP, three Elliot children who died before the age of two, likely of Spanish flu. I saw that and thought with cruel relief that whatever might happen, my sons were eight and 11; I wouldn’t be burying babies. Thank you, Woodlands, for letting me get friendly with death on my own terms.

A pandemic highlight was learning about venerable Fred’s Water Ice at 54th and Chester, with its innumerable flavors and masked, smooth and carefully distanced service. Thanks also to my longtime barber Antoine, dutifully wearing his mask even if that made it harder for him to give his contrarian political speeches. Gentrification may have its way, but for now, we are African and African American, Caribbean, trans, Mennonite and lapsed Mennonite, Muslim, queer, Latinx, Jewish, Asian and Asian American, wealthy, cis, straight, heathen, Christian and atheist, committed polyamorists, all wearing masks, trying not to kill each other, trying to stay alive.

After George Floyd was murdered in Minneapolis, West Philadelphia was the site of marches and rallies. After being inadvertently shamed by the blond sixth-grader next door who announced that he had gone to a big protest downtown, I took the children to a “family-friendly rally” in Clark Park, and we immediately wound up in an Inquirer photo, looking unnecessarily heroic.

My life has been a decades-long investigation of this neighborhood. Yet somehow it became a pandemic discovery.

Other uprising days were hectic, like when protests turned to mayhem on 52nd Street and a stream of looters (for the record, multi-racial) passed by my parents’ porch; police bodily assaulted protesters and bystanders, blanketing the corridor with tear gas. Pennsylvania shuttered my liquor store for a vengeful interim. But through it all, I felt safer here than I would have in other neighborhoods, where white men gathered to “protect” national stores or with hammers and bats to champion police abuse. By contrast, Chris Brennan reported on Twitter that near 30th Street Station, an Asian American man, a private citizen named Matt Delatour, was distributing masks and rubber gloves to protesters returning from Center City. “I just wanted to make sure everyone is safe,” he said. “We still got the COVID going around.”

Shout-out to Kol Tzedek, the West Philadelphia synagogue, whose message at virtual Kol Nidre services on Yom Kippur, the holiest night of the Jewish year, was “Don’t call the police.”

Gun violence is surging in this city, particularly within the Black community. Like the disproportionate number of Black COVID deaths, this violence is the genocidal outcome of economic exclusion. But during the summer and fall, when helicopters buzzed overhead and tensions ran high in a 1980s/Frank Rizzo way, I had the overheated thought that the neighborhood armory might protect us. If racists brought the ruckus, then maybe on that day, there would be peace among the Black and local. For once, maybe guns could keep us safer.

Perhaps that was fantasy, but the ruckus threat felt real. The day after Justice Ruth Bader Ginsburg died, fliers threatened a Proud Boys march in Clark Park, “the belly of the beast.” I feared violence, but I also felt honored that racists had marked West Philly as the opposite of what they were. And then, of course, they didn’t show up.

Another time the neighborhood felt marked was when a police officer killed Walter Wallace Jr. on October 26, 2020, just a few blocks from where, in 1985, police dropped a bomb on a home, killing 11 MOVE members. Months on edge had left me paranoid — I couldn’t shake the feeling that the shooting was deliberate, designed to provoke voter-suppressing chaos on November 3rd.

But they can’t kill us all.

Clearly, this is not utopia. We live amidst savage inequalities, COVID and despair. While some schools inhabit substandard facilities, another just completed a gleaming million-dollar playground renovation. Developers knock down historic churches and leave shockingly ugly buildings in their place. I personally think there are too many dogs in the neighborhood. But this community is committed to the American city despite the continuing problem of American history, profoundly welcoming (not you, fascists), community-minded, and thirsty for justice. Though I’ve lived throughout the United States, my life has been a decades-long investigation of this neighborhood. Yet somehow the neighborhood became a pandemic discovery. In the fall, my mother started pressuring me to pack an emergency “go bag,” but I was genuinely stumped about where in the world we would go, since we were already here.

Asali Solomon is the author of The Days of Afrekete, forthcoming in fall 2021; Disgruntled; and the short-story collection Get Down. She teaches at Haverford College and lives with her family in (West) Philadelphia. © 2021 by Asali Solomon

Published as “Live From ‘The Belly of the Beast’” in “The City Survives” essay collection in the June 2021 issue of Philadelphia magazine.