There were fewer overall incidents on Monday and overnight, but the chaos continues. 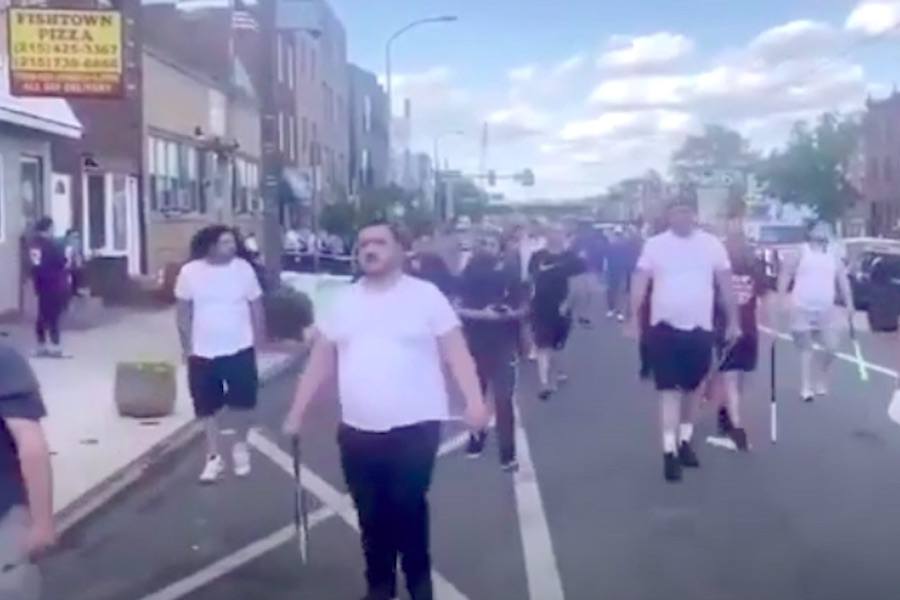 Bombed Out ATMs, White Men With Bats, and an Alleged Looter Shot at a Gun Shop

After a weekend of protests and riots in Philadelphia, Monday brought with it more chaos. Though there were fewer overall incidents reported, there was still plenty of activity.

Police are investigating a series of ATM bombings in the city, with some reports indicating that at least ten ATMs were hit with explosives. In one case, the apparent bomber was reportedly killed in the explosion.

Videos are making the rounds of white men in Fishtown armed with bats. They’ve said they are there to protect police and their neighborhood. One bystander, a WHYY reporter, says he was attacked by some of the men. He wound up in the hospital last night after filing a report with police. On Tuesday afternoon, both Mayor Jim Kenney and police commissioner Danielle Outlaw made it clear that “vigilantism” is unacceptable.

Also yesterday, protesters who took over I-676 during rush hour were teargassed. Some of those protesters said their gathering was peaceful.

The Inquirer quoted one woman in Fishtown, who asked the police there to disperse the vigilantes: “Why were others teargassed for peacefully protesting but they could walk around with bats and be protected?” On Tuesday, Outlaw said the matter is under investigation.

And, as if that weren’t enough, police are investigating after a South Philly gun shop owner shot an alleged looter inside his store overnight.

From Saturday at noon through Tuesday morning, Philadelphia police had made 692 arrests. The vast majority of these defendants (486 of them) were issued code violations for things like staying out past curfew and failing to disperse. Police made 186 looting or burglary arrests. Other charges include assault on police, firearms violations, theft, rioting, vandalism, and “propulsion of missile,” the charge used when somebody throws a rock or bottle at a police vehicle, for instance.

Krasner and McSwain aren’t exactly the best of pals. McSwain, a Donald Trump appointee, thinks Krasner is soft on crime. Well, actually, a hell of a lot of people think that. Point is, Krasner’s policies in no way shape or form align with McSwain’s or Trump’s.

And on Monday, McSwain took to the podium in Philadelphia to announce that his office will personally step in to prosecute any protesters, looters or rioters whose offenses rise to the level of a federal crime.

Those violations could include arson, inciting a riot, engaging in civil disorder, destruction of motor vehicles, destruction of federal property, assaulting a federal officer or federal employee, and various firearms charges.

“In the face of extreme provocation this past weekend, with various physical objects and obscenities being hurled at them, the brave men and women of the Philadelphia Police Department did their job, and exercised admirable courage and restraint while doing so,” McSwain said. “Operating under extremely dangerous conditions, they did their very best to keep the city safe – and I applaud and thank them for that.”

“But restraint only goes so far,” he continued. “It is time to squarely confront any further violence and stop it in its tracks. Any continued violence, destruction of property and theft endangers the lives and livelihoods of others, and interferes with the rights of peaceful protestors, as well as the rights of all other citizens. It also undercuts the work that needs to be done to address legitimate grievances…. Federal law enforcement actions will be directed at apprehending and charging the violent agitators who have hijacked peaceful protest and are engaged in violations of federal law.”

He went on to add that anybody who engages in “violence and destruction” that fall within his jurisdiction with be prosecuted in federal court “to the fullest extent of the law. That is a promise.”

Meanwhile, Donald Trump on Monday told the country’s governor’s that they need to toughen up on protesters.