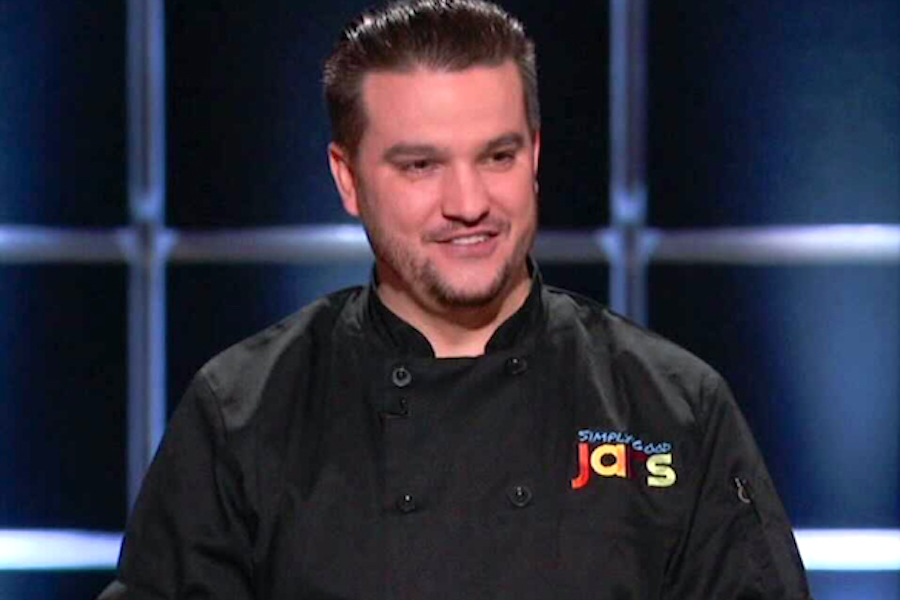 On Friday, “Shark Tank” returns to ABC with a new episode. Among the handful of entrepreneurs hoping to score a deal with the venture capitalists, a.k.a. “The Sharks,” is Temple University Fox School of Business alum Jared Cannon. He’ll pitch his company Simply Good Jars.

In 2017, Cannon left behind a career working for well-established Philly brands like Tria, Honeygrow, DiBruno Bros., and Iron Hill to launch Simply Good Jars, which sells healthy meals in, you guessed it, jars, which are meant to be recycled or reused.

Cannon, 35, runs his company out of the Offsite at Fitler Club workspaces at 24th and Market. And on Monday, he opened a brand new research and development facility in Bridgeton, in partnership with Rutgers. We caught up with Cannon to learn more about him, Simply Good Jars and, of course, how it went with the Sharks.

I have to admit it. Every Friday afternoon, I Google “Is there a new ‘Shark Tank’ tonight?” Are you also a member of the Cult of Shark Tank, and was your experience on the show what you expected as a viewer?
I’ve watched it pretty religiously for the last five or six years. And it was pretty on point with what I expected. It’s the hardest thing I ever did, but it was easier than I thought it would be.

You’re on this carpet with Sharks who don’t know anything about you. You get mere minutes to create a value proposition that gets them excited. I found it energizing, exciting, inspirational, and, yes, a little intimidating.

So you walk out there. The cameras are on. And what do you tell them?
At our core, we are a fresh food manufacturer and distributor of products meant to be good for you, for society and for the environment. These are chef-crafted products that actually taste good and they make healthy eating more accessible. We try to help eliminate hunger. We want to eliminate plastic waste. All in the form of a convenient pre-packaged salad.

And am I right that the thing that really makes Simply Good Jars particularly unique is that your food comes in a jar?
Our whole model is really built around and starts with a jar. The jar was designed with a life cycle in mind.

With plastic packaging, you use it once for minutes and throw it away and then it sits in landfills for hundreds of years. So we created a packaging that could easily be resealed and recycled and reused. And then we put a salad in it. We have a patent pending on a process that extends the normal shelf life of the salad by three times.

After you eat the salad, we encourage you to scan the QR code on the jar and it will take you to a landing page where you pledge to recycle it, reuse it or repurpose it. You pledge not to throw it in the garbage. And for every one of those pledges, we donate a meal to the community in whatever area you are in. In Philadelphia, we partner with Philabundance.

So if I want to eat a Simply Good Jars meal right now, where do I find it?
Today, we are at grocers in the Philly, New York and Chicago markets. You can find us on GoPuff. We are very quickly and rapidly accelerating. We’re launching with 7-Eleven, drug stores and grocers all the way up to New England and as far south as North Carolina, all in the coming weeks. And before long, we expect to have full penetration to most of the country. 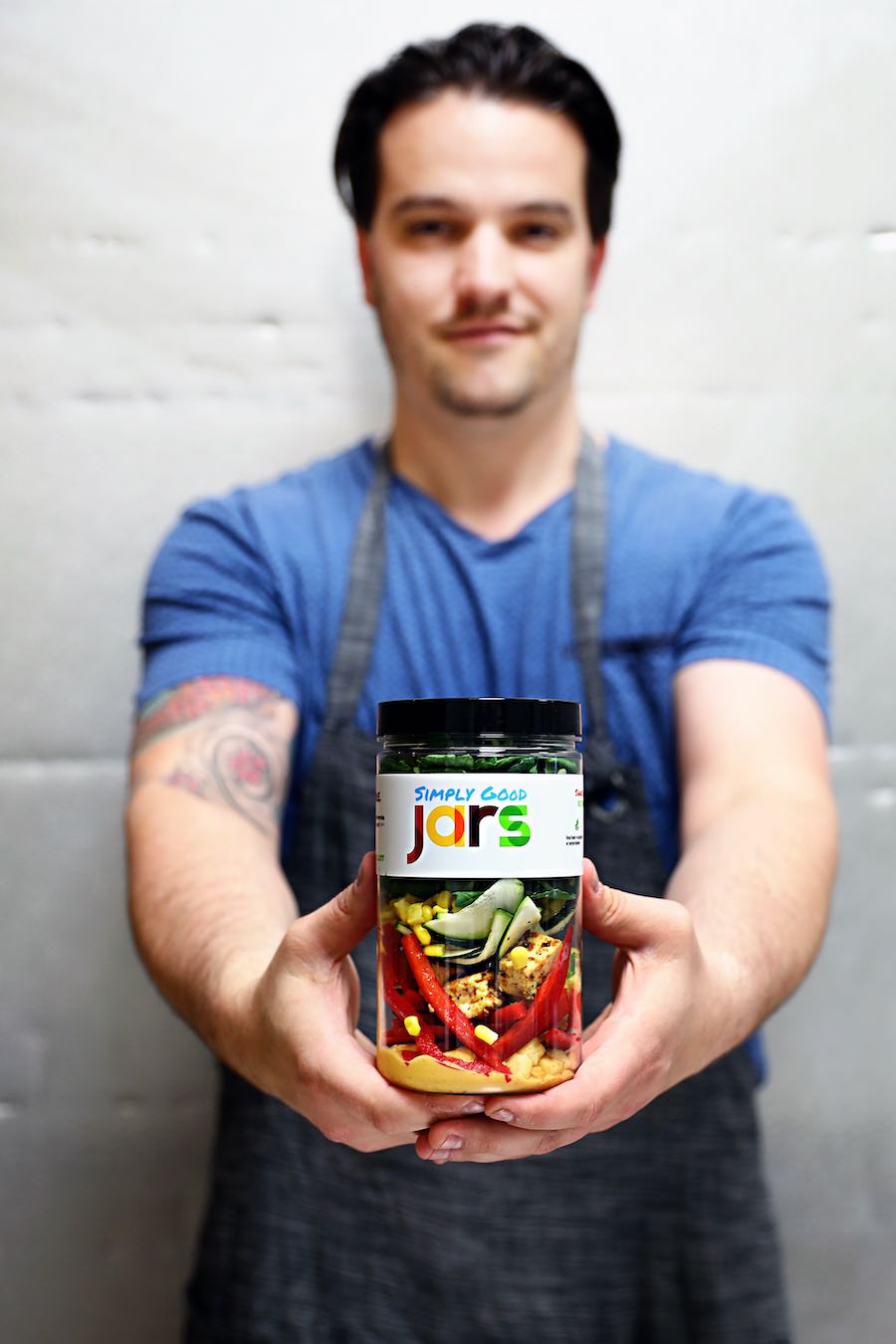 And where did you learn how to do all of this? What’s your background in the industry?
I went to the Culinary Institute of America in New York and then I went to Miami for six years in the hotel business. My mom begged me to come back up here, and I got a job as head chef for Iron Hill. Then I was the district manager for Honeygrow for about a year before running all of the Tria locations.

I get the food background, but launching a business like Simply Good Jars is another thing entirely.
It was really the two years I spent at Temple getting my masters degree from the school of business that made me truly understand what entrepreneurship was all about. I graduated in 2016 and then put it to the test with Simply Good Jars in 2017. I launched with a $1,000 loan and within the first month of business, I had a waitlist of 700 people. And it was off to the races. Since then, I’ve raised about $4 million in investments.

What’s happening at this new R&D spot in Bridgeton?
We partnered with the Rutgers Food Innovation Center on this. Let me put it this way: The former tenant was Impossible Foods. There’s a lot we can do there. We are in development on a product that’s coming out that I can’t talk about right now. It’s not a salad. And it’s going to be really disruptive.

Back to “Shark Tank,” there are stories of people applying over and over again before they got on. How did it happen for you?
The casting agency actually reached out to us. I have no idea how they found us. They wouldn’t tell me. I sent them a pitch video along with a full application. We had several interviews and meetings and moved through the process over a couple of months. I learned we were selected and it was like, holy crap. You sit there and watch the show and then it becomes so surreal when you realize you are going to be on that carpet. I went into a really seize-the-opportunity, once-in-a-lifetime mindset.

So what does one do when you find out you’re going to be on the show? Do you hire a consultant to teach you what to say and how to get a deal?
I was unable to tell anyone — not my family, no one — that I was even applying. This was my little secret up until last Friday, when I was told I could announce it. That’s how confidential all of this has been.

I guess, considering that confidentiality, you’re not going to tell us if you got a deal.
You’ll have to watch on Friday.

In the age of COVID, is it safe to assume that having a big watch party is out of the question?
You know, I think even pre-COVID, we wouldn’t be doing that. We’ve been told to expect an absolute bombardment — tens of thousands — of inbound messages on the phone, on social media, wherever, all that night. There is no time to party. We’ve really been preparing so that we have the infrastructure to handle all of that communication. So for me, Friday night, I’ll be rolling up my sleeves and preparing for the inevitable.