Why Is Philly In Such a Mess Right Now? Because Our Politicians Have Lost Their Souls

Remember when elected officials here used to curse each other out and literally fight in City Council? The current class of local politicians is what Ed Rendell would call "wusses." 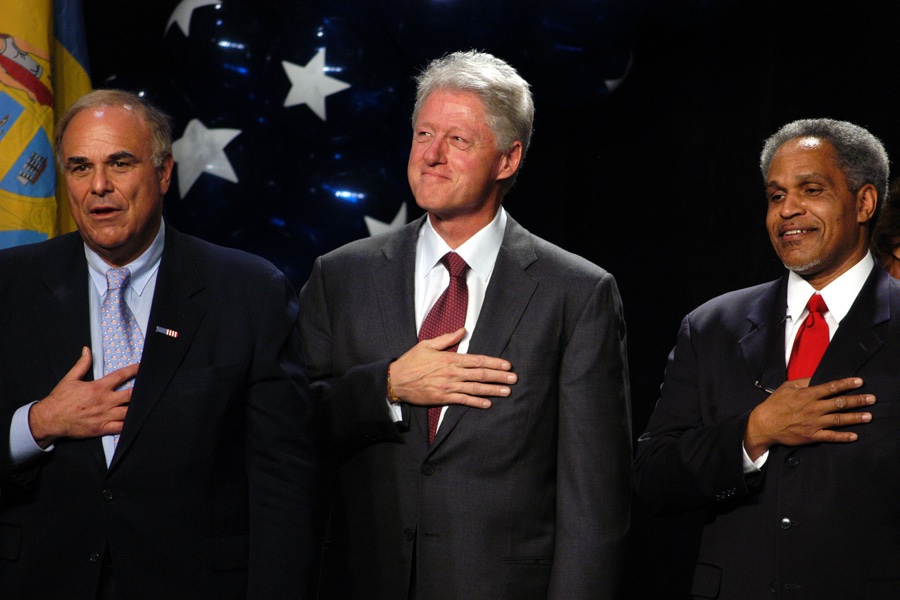 Say what you will about them, but Ed Rendell (left) and John Street (right) — pictured in 2003 with former President Bill Clinton — were Philly politicians willing to get into it with colleagues. Photo by William Thomas Cain via Getty Images News

“We need leaders with the courage to risk the thing that matters most to them: their own jobs,” former Pennsylvania Governor Ed Rendell wrote in his 2012 memoir A Nation of Wusses. “No wusses need apply.”

Rendell, also our former mayor and district attorney, has a storied history when it comes to clashing with politicians, sometimes (okay, often) putting his foot in his mouth along the way. But despite his various controversies, he remains one of the most influential politicians Philadelphia has ever produced. Part of the reason is that unlike our current batch of elected officials, Rendell and his contemporaries had no problem speaking up and out — whether they were wrong or right — when it came to issues impacting Philadelphians.

That fiery spirit of Philly politics past is missing, right when we need it the most. Last month, our city was in the national spotlight in the worst way: Our health department tapped a reckless 22-year-old to lead its mass COVID-19 vaccination clinic — with predictable results. Then our mayor and police commissioner came under fire over another damning report detailing how they violated the human rights of Philadelphians.

Meanwhile, no resignations have been called for by anyone on City Council regarding either of these horrific cases. Instead, we’ll be subjected to more hearings and drawn-out political theater that changes nothing. What we are currently witnessing might be the consequence of Democrats trying to appear united due to how polarized national politics has become. Back in the day, it wasn’t unusual to see our elected officials calling each other out. Unfortunately, I now get the sense that such calls for accountability are being unfairly framed as divisive, rather than as speaking truth to power.

So instead of courageous demands, we now get statements of displeasure with no real calls to action.

“It really just makes my blood boil,” City Councilmember Cindy Bass said about the botched vaccine rollout. “We really owe those in our communities who have a mistrust of the medical community — we owe them an explanation. We owe all citizens and taxpayers an explanation as to how this happened.”

“I could not help but wonder, as all my church mothers used to say, how they got over,” Councilmember Katherine Gilmore Richardson remarked. “How did a group led by college students, with no medical experience and no track record of providing medical services anywhere, get the responsibility of overseeing a part of our city’s vaccine distribution?”

But what about calling for health commissioner Tom Farley to resign for allowing this to happen on his watch? Why aren’t politicians proactively requesting information about hiring practices and processes before scandals erode trust? And if such requests aren’t being answered, how about applying public pressure before another bombshell drops? It appears as though everyone — across party lines — became deer in the headlights when community and press began to scrutinize. That shouldn’t be the case in one of the largest municipal governments in America, where there are plenty of legislative aides, deputies, and additional staffers on payroll who could have asked more questions without waiting for the public to be outraged.

All of this makes me long, in a way, for the “good ol’ days” of Philly politics, when passion, for better or worse, drove policy, and when fists sometimes flew in the name of enacting change. For example, in 1979, the late Councilmember Lucien Blackwell complained during a City Council session about police use of blackjacks at a protest. “You’re an instigator,” fellow Councilmember Fran Rafferty shouted at Blackwell. “You’re a troublemaker!” Blackwell called Rafferty a racist. Rafferty lobbed a homophobic slur, and a fight ensued. Rafferty, then-Councilmember John Street, and another elected official came to blows in 1981 when Street was angered by remarks during an emergency City Council session on schools. The Pittsburgh Press would headline the incident “No Brotherly Love Lost in City Council.”

I will never forget the otherwise mild-mannered former Mayor Michael Nutter cursing like a sailor when calling out bullshit. “Now, there are some other trifling, raggedy people around here who can actually pay who don’t pay,” Nutter famously said when announcing a plan to go after property tax deadbeats. “We’re going to chase their little asses down as hard as possible.”

Don’t get me wrong: I’m not calling for our politicians to literally fight, but wouldn’t it be nice if they at least seemed willing to? Will no one in the current establishment step up to “chase their little asses down”? Seriously, we’re in what feels like our city’s 11th hour and I’m still waiting for one of our elected officials to make a bold declaration. Fiery discourse in politics is necessary because it can motivate the public to take and demand action. And it reminds elected officials that nobody is above reproach. With elected power comes responsibility: Public office comes with a bully pulpit, and if there was ever a time to resort to it, it’s now.

I miss when City Council and the administration clashed for good reason. City Hall used to be filled with healthy debate about the future of the DROP program, city employee perks, paid sick leave. Since Kenney was elected mayor, major disputes between City Councilmembers and his office have been rare — with the possible exception of the still-courageous Maria Quiñones-Sánchez, who frequently calls him out.

And that’s crazy given all that’s happened on Kenney’s watch, from the regressive soda tax to skyrocketing gun violence to racism in the police force and, now, a major breach of public trust. These are things to fight about, and I don’t understand why our current elected officials aren’t. Part of the problem is bittersweet: We have so many new members on Council (a good thing) who are still trying to establish their positions. Meanwhile, their more established colleagues are too much in lockstep with the establishment. Many, such as Helen Gym, tout that they speak truth to power — but when it comes to holding our mayor accountable or calling for others to step up, politics often preside over principle. It’s not that Gym hasn’t ever come out swinging (calling out the Mayor’s budget cuts last summer was notable), but it’s obvious that her advocacy cherry-picking (such as remaining loyal to indicted Councilmember Bobby Henon) has its limitations.

At this point, we are residing in a city of wusses — politicians too complacent to deliver on the promises that got them elected in the first place.

“That spirit, that sense of no limits, appears to be gone, swallowed up by a fear of risk-taking,” Rendell wrote in his memoir. “There don’t appear to be too many candidates for a future Profiles in Courage who could turn things around. Our problems mount, and there don’t seem to be enough people willing to take on risk to begin the process of addressing them.”

Nine years after Rendell wrote that, Philly is still guilty as charged.