2020 in Review: These Are the People and Things I’m Grateful For in a Challenging Year

No one is sad to see 2020 go, but there were moments in this difficult year that showed us we're stronger than our biggest setbacks. 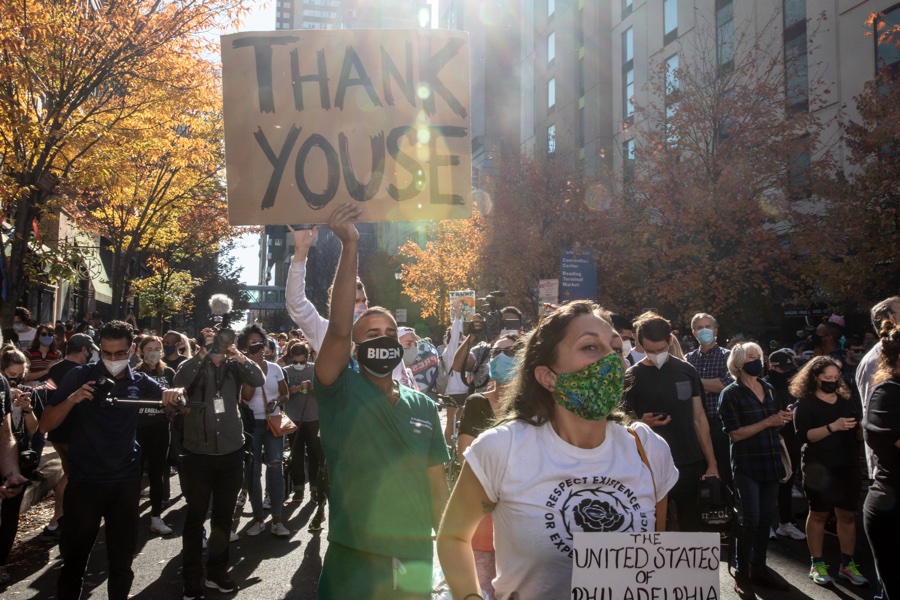 A record Philadelphia voter turnout is just one of the things to be grateful for in 2020. Above, Philadelphians celebrate outside the Philadelphia Convention Center after Joe Biden was declared the winner of the 2020 presidential election. Photo by Chris McGrath/Getty Images

While stocking up on last-minute groceries at Whole Foods this week, I got my privilege checked.

As I was wrapping up a call, I began to rant to the cashier about how much this year sucked. She listened as I carried on about not being able to travel and cook family recipes back home. When I welcomed her to join my pity party, she dropped a bombshell: “Must be nice. I still gotta work my second job on Christmas Day, and I just lost another family member to COVID-19.” That hit me like a ton of bricks and made me realize how entitled I sounded.

Like many people across the country, this will be the first Christmas I’ll not be traveling to see my loved ones. It was supposed to be a Southern Black feast in my hometown of Houston, Texas. Down South, we eat dressing — never stuffing. Only yams, collard greens and baked mac ’n’ cheese made with soul by my mother will do. And I look forward every year to pouring the Hennessy as a contentious card game of spades commences. In addition to those traditions, this time of year has become rich with personal significance. My fiancé proposed to me last Christmas Eve — the same day, eight years ago, that I came out to my family as queer. Job promotions, first-semester grades and new opportunities have often kept me excited for the new year ahead. It’s why the pandemic has felt so difficult for me this holiday season. But now I’m reflecting on my “losses” this year and how they pale compared to those of so many around me.

Gratitude — being thankful, being ready to appreciate and express kindness — is something I’ve turned to lately as a way to combat the easy dread of 2020. In Philadelphia, there are so many things to be pissed off about right now (such as state officials recently missing the deadline to spend $108M in rent/mortgage relief from the CARES Act). But instead, I’m choosing to focus on what I’m grateful for, the things will keep me optimistic as we head into a (hopefully) more promising 2021:

For starters, I’m pretty damn glad to be alive right now, and that’s thanks in no small part to essential workers who’ve stepped up for all of us. Health-care workers. Poll workers. Service-industry workers. Sanitation workers. Mail carriers. Teachers. Ride-share and delivery drivers. These are the people who’ve kept this country afloat during these rough times. I find it hard to feel personally frustrated when I consider the sacrifices they’ve made. I’ve been making it a point to tip such workers a little extra in person, with cash, and thanking them every time I can.

I was amazed by the Philly restaurants and chefs, such as Kurt Evans of Down North Pizza and Jennifer Zavala of Juana Tamale, who found ways to get creative, accessible and socially conscious with their food even as the industry took a huge hit. Evans uses his establishment to provide formerly incarcerated individuals with career opportunities paying equitable wages. His Detroit-style pizza couldn’t have come at a better time, as Philadelphians increasingly want woke chefs and dope food. Zavala is giving unemployed cooks opportunities to make some extra cash with her wildly popular fast-casual Mexican dishes — which might be part of the reason birria tacos are all the rave now in Philly.

I was particularly inspired by the Black Doctors COVID 19 Consortium which, sparked by a strong GoFundMe campaign, was able to bring help to Black communities that weren’t receiving proper testing and resources. Such selflessness has made me consider how much more I should serve overall.

The fearlessness exhibited by the essential workers was also on display by those who took to the streets under the Black Lives Matter banner this summer. As the pandemic disproportionately impacted communities of color and police continued to kill unarmed Black people, Black activists, many millennials and younger, took to the streets with masks, righteous rage and conviction. They finally brought the racist Frank Rizzo statue down and made city and state governments begin to consider cutting police budgets. Even more impressive: The activism extended beyond policing to housing, as protesters encamped on the Ben Franklin Parkway reached an agreement with the city that led to better housing for some of our most vulnerable citizens. Activists in this town reminded me that no matter how bad it gets, frustration should be motivation and channeled toward making change.

Perhaps the most promising sign of channeling frustration into action was how Philly showed up to the polls in record numbers to vote Donald Trump out of office. And the now-defeated Tyrant-in-Chief’s infamous utterance that “Bad things happen in Philadelphia” may have been the extra motivation we needed. I had initially feared that the pandemic, the ho-hum nature of Biden’s nomination, and racism would keep Philadelphians from turning out the way they did for Hillary Clinton in 2016. But not only did we vote; we produced the highest voter turnout this city has seen in 25 years. Philly truly lived up to its underdog reputation when it was our numbers that pushed Pennsylvania firmly into Biden’s column.

I can’t help but be thankful for the noticeable strides in diversity and inclusion we’re seeing across so many industries. It’s been a pleasure to witness more people making it a point to address food insecurity and poverty across the board. Racists and white power structures are getting called out and canceled faster than ever. Such efforts may not be perfect, and yes, they’re rather long overdue, but dammit, things are looking more up than down — and that’s something we can all be grateful for.