Best of Philly: Here’s to the People Who Protested

They’ve marched in Center City and South Philly, on 52nd Street and in Fishtown. And they’re changing the world. 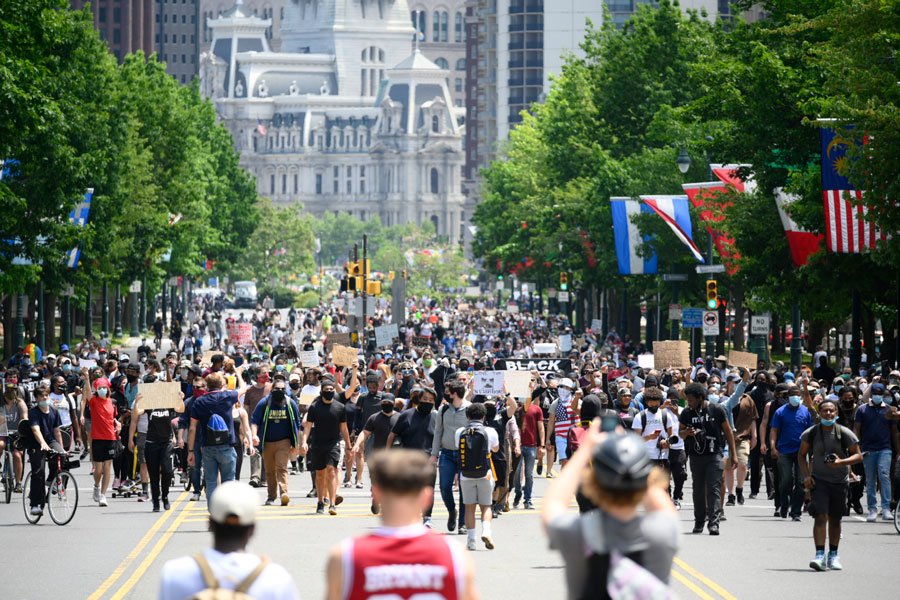 Philadelphia protesters on May 30th. Photograph by NurPhoto

My phone rang in the middle of the night; a media colleague said four words I wasn’t expecting to hear so soon.

“They took him down,” he told me ecstatically.

I’d eventually see a few pictures of this once-in-a-lifetime moment — tall cranes lifting away the bronze monstrosity that had sparked controversy and racial tension in Philadelphia for more than 20 years. Erected in honor of the infamous mayor with a history of racist and homophobic police brutality, the Rizzo statue was almost as contentious as the man it represented.

Only a few days prior to the statue’s abrupt removal, diverse activists from all over the region had tried to set it on fire, defaced it, and attempted to bring it down with a rope tied around its neck. The message was loud and clear: Philadelphians couldn’t wait another moment. It was finally time for this oppressive monument to go.

We owe its removal to the protesters who stood their ground that day and activist groups such as Philly for R.E.A.L. Justice, which led the first major calls for the Rizzo statue to come down, in 2016.

As the world wrestles with a devastating pandemic and signs of a racial uprising following the extrajudicial police killing of George Floyd, it’s important to remember that protesters have kept the pulse of the moment in more ways than one. Whether standing up against police brutality or reminding the world that #BlackTransLivesMatter, protesters have made sacrifices to remind us of the importance of speaking out even when social distancing.

“In the midst of this pandemic, I would really enjoy spending all my time hanging with friends and family, watching movies or playing video games,” says Anthony Smith, a social studies teacher in Philadelphia. “But in a country that destroys Black life so indiscriminately and viciously, I am called to action.” Smith, 28, a steering member of Philly for R.E.A.L. Justice, has been an activist for the last half-dozen years — all in the name of wanting to “get out of this endless cycle of useless reform and Black suffering.”

In recent years, it almost felt like we had protest fatigue. Though there was a huge wave of demonstrations following the election of President Donald Trump, such protests seemed to lose their momentum as the electoral dust settled. Bye-bye to the ambitious Handmaid’s Tale-inspired costumes people wore as they marched down Broad Street calling for the end of a fascist White House regime. Sure, we still had the Women’s March and an occasional spat with alt-right out-of-towners, but things seemed to wind down a bit before this summer arrived — and oh, was Philly ready.

It was hard to ignore the thousands of people who took over the streets of Philadelphia from all over, demanding justice not just in Center City, but in Fishtown, on 52nd Street, in South Philly and beyond. Not every gathering was the same — some protesters were met with tear gas or violent vigilantes — but their solidarity remained intact.

“I chose to protest because it was the right thing to do,” says Shakira King, an activist from West Philadelphia. “Philadelphia is a Black mecca. Its Black art and history are being erased; its people are suffering and being pushed out. This city needed to know that we are here and deserve to be cared for and invested in.”

When you consider the progressive policies being proposed at City Council and in Harrisburg, it’s hard not to recognize the impact that protesters like King have made. Ending stop-and-frisk, defunding the police, and increasing law enforcement accountability are demands that local activists have been making for years. Organizations like Black Lives Matter Philly, the Black and Brown Workers Cooperative, Philly for R.E.A.L. Justice, Juntos, and ACT UP Philadelphia, as well as members of the MOVE family and many others, were calling for radical social justice long before it was the latest trend to catch the attention of safe, liberal nonprofits and companies.

It is the protesters we should be honoring for awakening people and motivating change once more. Let’s hold them in the highest regard, instead of the Rizzo statue that finally fell like the Berlin Wall.

Published as “The People Who Protested” in our Best of Philly tribute in the August 2020 issue of Philadelphia magazine.