The Mayor chose to polish and protect a symbol of Philadelphia racism at the exact moment it should have been removed forever. 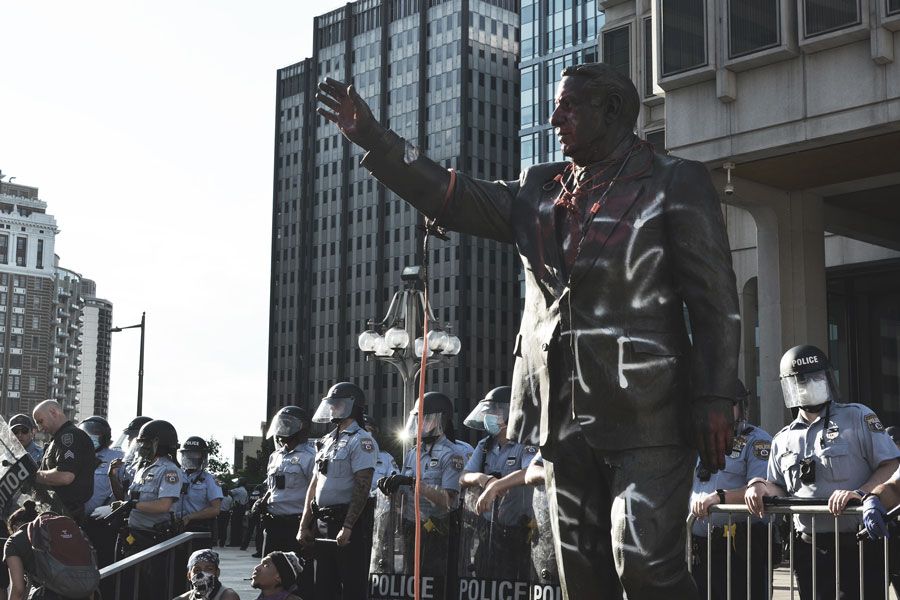 The Frank Rizzo Statue on May 30th, before it was cleaned the following morning. Photograph by Chris Narisi

As a black woman living in America, I know what it feels like to be gaslit.

I felt the twinge of psychological manipulation when Amy Cooper called the police on a black man for no reason, then claimed she didn’t mean him any harm.

I felt it again when a Minnesota medical examiner released an autopsy report that implied it was George Floyd’s pre-existing conditions that caused his death, not the knee of a police officer sitting on his neck for more than nine minutes.

I’ve felt it in countless incidents in the workplace, in stores on Walnut Street, in fancy restaurants on Rittenhouse, where white people have subtly insulted or profiled me, then claimed to have no idea why I’d gotten so upset.

Let me get this right: the most important thing the City could think to do this morning is clean the #Rizzo statue?! Seriously? pic.twitter.com/fT3dC2pOqm

So on the morning after one of the worst nights of protests in Philadelphia’s history, when I saw that city government had a cleaning crew out power washing the Frank Rizzo statue before the sun had even fully risen, there was no doubt about it, I’d been gaslit again.

The statue of the infamous former Philly police officer, commissioner and mayor had become a focal point of the protests the day before, with protestors attempting to take it down by hammer, rope and fire, to no avail.

For many in Philadelphia the Frank Rizzo statue is a symbol of oppression and brutality. So much so that many have called for its removal. Yesterday, protestors defaced it and tried to tear it down. It’s telling that it was one of the first things cleaned up this morning. pic.twitter.com/o2qBnYDcNw

The sheer effort protestors used to attempt to tear it down demonstrated the anger this towering image evokes. Yet instead of using this critical moment to take decisive action and remedy a longstanding point of division in the city, mayor Jim Kenney chose instead to polish it up and make it shine. The statue was quickly cleared of graffiti and soot, even while other statues nearby remained defaced for hours.

Near City Hall, the Frank Rizzo statue, which had been vandalized and attempted to be burned, was cleaned. Around the corner, the Ben Franklin statue remained defaced. https://t.co/Wk8QTngVrd

It’s not enough that of the more than 1,500 public statues in Philadelphia, only one honors a black person, and that statue was just erected in 2017. But it’s Rizzo’s history of no-holds-barred actions against black people in this city that makes it particularly insidious that his statue remains, now shiny and clean, standing 10 feet tall, waving a mocking hand over the marginalized people of this city even as they rage against the violent ideologies Rizzo stood for.

Never mind that Rizzo casually used slurs against people in the black and gay communities, or that he once called a news reporter a “crumb bum” and threatened to smash a camera over his head for merely doing his job, or that he called for black activists in the Black Panther movement to be “strung up”, or that he once said he would make “Atillah the Hun look like a faggot” to emphasize just how tough he’d be on crime as the city’s mayor. Rizzo’s method of broken window policing resulted in a Philadelphia police department that is now notorious for its corruption and often aggressive and costly approach to curbing crime. In his own words, Rizzo believed the way to treat “criminals” was “spacco il cappo” — break the head. He made good on this promise in 1978 when he ordered police to forcibly remove members of the black liberation group, MOVE, from an apartment building in Powelton Village. Rizzo’s year-long conflict with MOVE and the 1978 confrontation is still noted as a pivotal precursor to the notorious 1985 MOVE bombing, one of the worst stains on Philadelphia’s history.

This is the man Philadelphia erected a statue to honor.

In a Sunday morning press conference, the mayor claimed the statue was not cleaned to make a political statement. “I can’t wait to see it go away,” Kenney proclaimed, feigning innocence in the matter. But the fact is, if Kenney really wanted the statue gone, it would’ve been gone a long time ago. The process to remove the statue has lingered on for years on his watch. Black Lives Matter activists were largely disregarded when they first called for the statue to be removed in 2016. Kenney decided he was “ready to have a discussion about it’”only after councilwoman Helen Gym called the issue out on Twitter a year later. Under public scrutiny, Kenney’s team announced that the statue would be relocated from Thomas Paine Plaza, but he didn’t state exactly where the statue would be moved to or when. Then in 2019, amid his mayoral re-election campaign, the timeline for the statue’s removal was suddenly extended to 2021 as Kenney griped about the project’s cost and nonchalantly told an Inquirer reporter, “Of all the issues on my scale of important things to do, this is not even in the top 100.”

After this weekend’s protest, the mayor said the statue will be removed “in a month or so.” One can only wonder how he suddenly found funding and a way to accelerate the timeline for the removal. And based on his past promises on the issue, it would be unwise to hold one’s breath in waiting to see if it actually gets done.

Whether the decision was intentional or haphazard, by rushing to have the Rizzo statue cleaned this weekend, Kenney sent a message to marginalized residents of this city that the issues that undergird their pain are not important to him. On Sunday night, state troopers and Philadelphia police officers stood guarding the statue ahead of a second round of protests, again, symbolically showing city residents what matters most to its leadership.

They are protecting a City building that was the scene of activity yesterday while officers across the city are involved in a complex response at multiple locations.

During the morning press conference, Kenney implored residents to “find something that demonstrates your pride and love for Philadelphia.” I’d ask Kenney to do the same. He can start by taking the statue down immediately, if not to show solidarity with those taking a stand against police brutality and racism, then at least to show the residents of this city that he actually gives a damn.