They were previously kept at a distance that one watcher said required him to use binoculars to see anything. The city intends to take the case to the Pennsylvania Supreme Court. 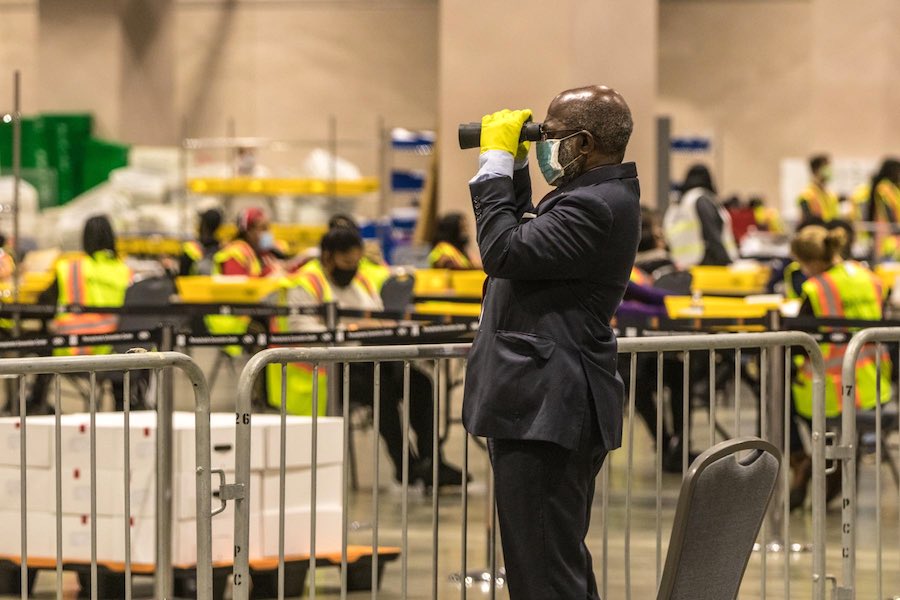 One of the election watchers inside the Pennsylvania Convention Center, where the Philadelphia vote count is being tabulated. Photographed on Election Day. (Photo provided)

As Donald Trump’s chances for a second term would seem to be decreasing, what’s increasing are the lawsuits and other legal efforts brought by Trump and his lawyers in key battleground states. And in one matter playing itself out in Pennsylvania’s court system even as you read this, a judge just ordered the city to allow Philadelphia election watchers within six feet of the workers counting the ballots inside the Pennsylvania Convention Center.

On Thursday morning, the Honorable Christine Fizzano Cannon, a Republican judge in Pennsylvania Commonwealth Court, reversed a lower court’s decision that denied the Trump campaign’s demand, filed on Election Day, to permit election watchers in Philadelphia to get closer to the vote counters. She ordered that this change be implemented immediately. The lower court did not explain its denial of Trump’s motion.

At a hearing on the matter earlier this week, a Republican election watcher, who is not identified in court documents, testified that election watchers are kept behind a metal barricade, and that the closest vote counter to him was 15 feet away while some were as far as 105 feet away. He claimed that the distances and obstructions made it difficult for an election watcher to actually see what was happening.

The election watcher noted that he was unable to see if the outer envelope had been filled out and signed properly, as is required by election law.

Linda Kerns, a Locust Street attorney who is handling the matter for the Trump campaign, summed up the argument in her appeal of the lower court’s decision.

“The Board of Elections seems to be indicating that as long as the watchers and representatives are in the room (whether the room is the size of an office or the size of a football field) that the requirements of the Election Code are met,” she wrote. “However, allowing such a narrow interpretation defies logic and reasonableness … Mandating a distance that prevents a candidate or his watchers to be truly present actually shrouds the election process in a veil, denying transparency and accountability.”

In the end, she argues that election officials have “set up a scheme that effectively eliminates the role of a watcher.”

I spoke with Republican election watcher Daryl Brooks on the afternoon of Election Day, as he stood inside the Convention Center watching the Philadelphia vote count.

“You have to have binoculars or bionic vision to see what the heck these people are doing,” Brooks, a West Philadelphia resident, told me. “We are all behind this gate, this barrier. We can’t go past it. But the problem is, the work is being done so far away from us, that we can’t see anything. And so we are damn pissed.”

But the city has argued that this is a massive operation requiring a lot of space as well as the need for social distancing and the observation of the voter’s privacy.

“Because of the need for staff to circulate unimpeded and the security and privacy concerns involved with handling ballots, the Board cannot permit outsiders to wander freely through the workspace,” the city argued in a legal filing on Thursday. “Accordingly, the Board has set up a location from which candidates and party representatives, potentially in large numbers, can view the room without impeding the operation.”

The city intends to take the matter to the Pennsylvania Supreme Court. A spokesperson for Philadelphia’s election officials did not immediately respond to a request for comment.

A report began circulating on social media on Thursday morning that the Pennsylvania Supreme Court had already reversed Judge Cannon’s decision. But Stacey Witalec, spokesperson for the Administrative Office of Pennsylvania Courts, insists this is a false “rumor.”