A new study shows that 60 percent of the state's registered voters have seen the claim that Hollywood and Democratic elites regularly participate in child sex trafficking. Worse: Twenty-two percent believe it. 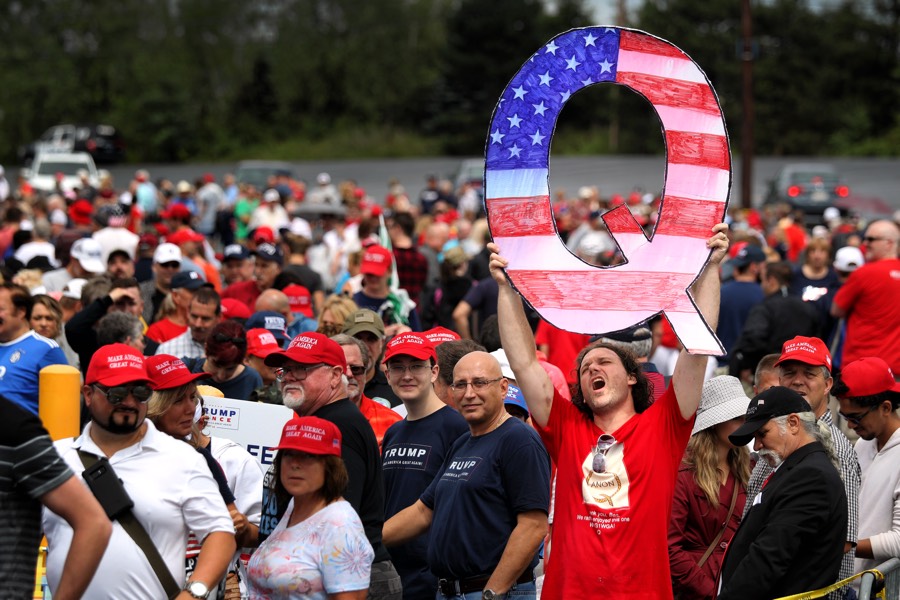 A QAnon conspiracy theorist in rapture at a Trump rally in Wilkes-Barre. According to a new study, many Pennsylvanians are falling victim to election disinformation. Photo by Rick Loomis/Getty Images.

From the department of “things that should concern you if you’re a citizen of a democratic polity that’s having an election in a few days,” allow us to present the findings of a new study by the nonprofit Avaaz. The group, which studies voter disinformation, surveyed Americans in nine swing states, including Pennsylvania, and found that more than 65 percent of registered voters in those states were exposed to political disinformation this year — just on Facebook alone. More concerning still: A not-insignificant chunk of them actually believe what they saw.

We’re not just talking about banal, nonsensical conspiracies endorsed by the President, like the lie that mail-in voting is fraudulent (although it’s worth noting that 35 percent of registered voters nationwide believe that’s true, per the study). Even when asked about truly bottom-of-the-barrel, internet-brain-rot levels of conspiracy, like “Hollywood and Democratic elites routinely engage in sex trafficking and pedophilia,” a full 22 percent of Pennsylvania voters bought in.

“The truth is, when we saw the numbers, it shook us to the core,” says Fadi Quran, the campaign director at Avaaz. These weren’t conspiracies circulating in the most extreme echo chambers. Eighty-six percent of all registered voters in Pennsylvania had seen the claim that mail-in voting will lead to fraud. Fifty-two percent had seen the totally unsupported claim that Joe Biden is a pedophile. Forty-three percent saw the debunked claim that antifa set fires in Oregon and California earlier this year.

You may be noticing a trend here: Most of these conspiracies seem to target the left. The Avaaz study found that while disinformation exists on both sides, two-thirds of it attacks Democrats. In some cases, it’s working: In Pennsylvania alone, half of all registered Republicans reported that they believe mail-in voting will produce voter fraud. Thirty-one percent of Republicans believe Joe Biden is a pedophile.

At its core, a conspiracy theory is a kind of defense mechanism — a way of turning in on yourself and creating something comfortable when the world no longer makes sense. And even for the less conspiracy-minded among us, 2020 is a year that hasn’t made much sense. Perhaps that explains why so many conspiracies of late — from QAnon to rumor-mongering about antifa — have migrated from internet forums to the mainstream. It’s not such a jump: Internet forums are the mainstream.

Adding to the bad news: If election interference in 2016 was the work of Russian bots and foreign intelligence agencies, Quran says such interference now seems to be happening more organically. In other words, Americans are propagating conspiracies themselves — no foreign help needed. (There’s perhaps no better example of this than the three U.S. conspiracy theorists suspected of birthing QAnon.) That’s not to say foreign governments have stopped trying to plant conspiracies. But a number of prominent Americans — like the brigade of QAnon believers running for Congress — seem to have realized how compelling conspiracies can be, and they’ve deployed them accordingly. Or maybe they really are true believers. Either way, it’s a sign of the earlier Russian disinformation campaign’s success: If you do a good enough job indoctrinating a population with conspiracy theories, you eventually don’t have to plant any crazy ideas yourself; the population will do it for you.

But if there’s a single group deserving most of the blame, it’s social media companies. (According to the Avaaz study, Facebook is the site where people most often encounter disinformation.) These are the fuel and vessel for any given conspiracy theory, via a process that usually goes like this: A story originates on a bogus news site, spreads throughout social media, and gets picked up by the more mainstream press, which gives the story new reach; the cycle then repeats. “They could have created and built their systems with more accountability, where the algorithms actually prefer honest, authoritative content to outrageous and false content,” Quran says of the social media platforms. But they didn’t.

Other tech experts agree. David Magerman, a multi-millionaire former hedge funder who’s working to rebuild the internet from the ground up so it protects users’ privacy, says the whole structure of social media is set up to reward the most incendiary content. An MIT study in 2018 found that fake stories are 70 percent more likely to be retweeted on Twitter than real ones. A similar phenomenon whereby legitimate news organizations routinely lose out to partisan ones plays out on Facebook.

The social networks could fix a massive chunk of the problem, Quran insists, simply by instituting fact-checking standards. Twitter has done so occasionally — and has labeled President Trump’s own tweets misinformation. But Facebook is the single largest source of bogus claims, according to the Avaaz study, not to mention the social network with the largest user base. And while Facebook has implemented some cosmetic fact-checking measures, Quran says they’re not close to sufficient. The company didn’t even have a disinformation policy in 2016, according to a report in the New York Times. And its recent actions, like banning QAnon groups, were only instituted after Facebook helped radicalize those believers in the first place. To this day, Facebook won’t fact-check political ads.

On the other hand, maybe asking social networks — which have a terrible track record when it comes to matters of truth — to fact-check is a guaranteed losing battle. That, anyway, is Magerman’s view. “It’s really a dangerous position to put social media companies in, to be arbiters of truth,” he says. He believes the fix is to strip the companies of their data-mining capabilities, which he says they use to funnel extreme content, like conspiracies, to users the algorithms find will be most susceptible to their pull.

It’s worth noting that prominent conspiratorial thinking isn’t a brand-new phenomenon. Back in 2016, a poll of registered Republicans found that half of them believed in the discredited Pizzagate sex-trafficking-conspiracy theory. Donald Trump popularized the lie that Barack Obama wasn’t born in the United States. Then there’s the JFK assassination conspiracy theory, or, if you want to go back further, the rumors about the origins of the Illuminati, which date to the 18th century.

But at least those conspiracies of yore were our own; now, they’re disseminated by foreign governments and repackaged through American social media to the masses. A meaningful chunk of registered Pennsylvania voters believes these lies. And they’re going to the polls with that “knowledge” in tow. Great.