Thousands of Philadelphians have already lost their jobs due to the virus. Now, in what forecasters say will be an extremely hot summer, many are at risk of having their electricity shut off. 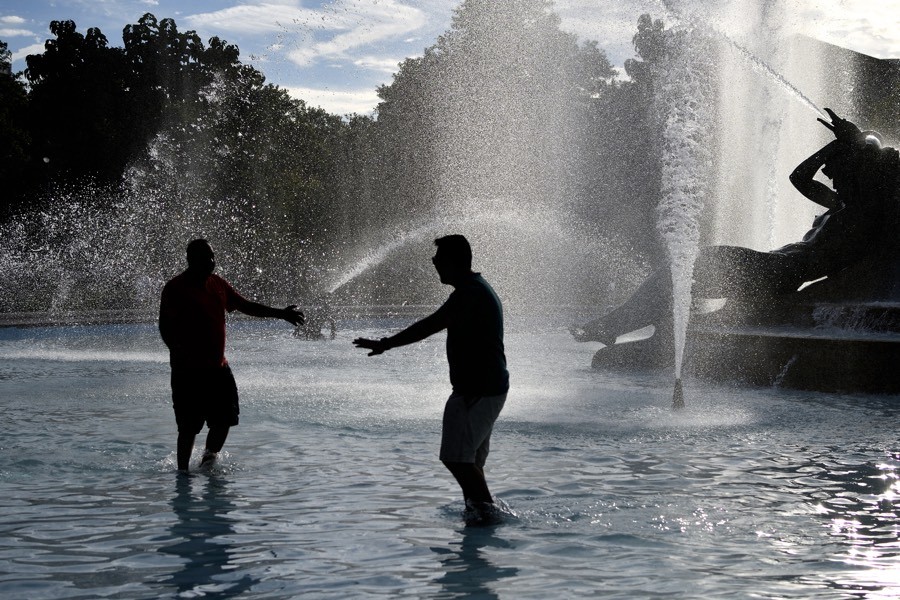 Two men cool off in a fountain during a past Philadelphia summer. Photo by Bastiaan Slabbers/Getty Images.

When the COVID-19 pandemic began, there was an initial line of thinking that the virus would be the great equalizer: Anyone could get sick, rich or poor, famous or not. Of course this was woefully naïve. It didn’t take long for researchers to find that, in Philadelphia, and indeed nationwide, people of color were significantly more likely to die from the virus than white Americans.

We are still very much in the midst of the first wave of the virus, but that wave is beginning to ripple outward and impact other areas of public health. One of those is summer heat, which upon first glance might also seem like a sort of great equalizer: the temperature is the temperature. Except that it’s not. In Philadelphia, neighborhoods with few trees can be up to 22 degrees Fahrenheit hotter than more tree-lined ones in the city — a division that falls along racial and economic lines. “This is very much a social justice issue,” says Ken Steif, a lecturer in the city planning department at Penn.

Meanwhile, because the pandemic has put thousands of Philadelphians out of work and shuttered child-care centers, more people will be stuck at home this summer — a summer that could break all-time temperature records, according to forecasters — and with less income. This has the makings of a budding crisis: There are currently more than 125,000 PECO customers in Southeastern Pennsylvania, and nearly 48,000 PGW gas customers in Philadelphia, who are behind on their bills and whose accounts are subject to termination.

That hasn’t happened yet, thanks to Governor Tom Wolf and the state Public Utility Commission (PUC). Wolf’s emergency pandemic declaration, which he issued in March, ensured that no utility provider in the state could shut off someone’s power, even if they were behind on their bills. But Republican legislators in Harrisburg recently passed a law that would end Wolf’s emergency declaration and the utilities moratorium along with it. (The state Supreme Court is set to determine if the legislature has the authority to override Wolf’s declaration.) At the same time, many utility providers are quietly lobbying the PUC to allow them to begin terminating accounts as early as mid-July, which amounts to an ultimatum — start paying or lose your power — right in the middle of summer, during a pandemic, and at a time when the weekly $600 federal unemployment supplement is about to run out.

For years, heat-related death was a persistent problem in Philadelphia. During a summer heat-wave in 1993, 118 Philadelphians died. In recent years, though, Philadelphia has been well prepared to counter extreme heat. The city has a specific heat plan that involves neighbor check-ins, an emergency phone line, and neighborhood cooling centers, all of which have combined to drastically reduce the number of heat-related deaths in the city. There were just 72 deaths from heat this past decade in Philly, down from 370 in the 1990s. In one study, researchers found that Philly’s current approach to heat exposure saved 45 lives per year.

The challenge, under the current circumstances, is that the city’s usual plan is essentially unworkable. Neighbor check-ins and closed-door cooling centers aren’t feasible in the middle of a pandemic, particularly when the group most susceptible to heat-related death — the elderly — is the same group that is most at risk of death from the coronavirus. The city, well aware of this fact, has not yet announced an alternate plan to prevent heat exposure, according to a spokesperson. (In New York City, the government plans to provide A.C. units to nearly 75,000 low-income seniors and also assist with utility payments; some city officials in Philly have said an expensive plan like that isn’t likely to materialize here.)

Much like the coronavirus, the impact of high heat is framed by racial inequities. Wealthier, whiter neighborhoods, like Society Hill, where the median household income is $94,000, are buffered by trees that greatly reduce on-the-ground temperatures. Meanwhile, in a lower-income neighborhood like Hunting Park (median household income: $24,000), about which the city recently published a report on summer heat, residents face higher temperatures and more burdensome utilities bills. According to that city survey, 16 percent of Hunting Park residents don’t have air conditioning at all; and of those who do, a full 77 percent still reported that they often or always feel too hot inside their homes.

There are resources for low-income utilities customers, including the federal LIHEAP program, which had $173 million in benefits available across the state this fiscal year and received an additional $35 million in funding from the CARES Act. Still, the city’s Hunting Park survey noted a troubling trend: Just 40 percent of residents had even heard of cost-assistance programs like LIHEAP; of those with no air conditioning at all, the number dropped to 4 percent.

An Increase in Delinquent Accounts

Currently, roughly 8 percent of all PECO residential accounts, or 125,000 accounts, are delinquent and subject to termination. The biggest increase hasn’t come from the customers PECO designates as low-income. Rather, it’s come from everyone else: Non-low-income delinquent accounts have jumped from 90,000 at this same time last year to 125,000. The obvious explanation is the pandemic: A new group of people, who normally don’t qualify for programs like LIHEAP, have found themselves unable to pay their bills.

So what are utility companies going to do about all of those unpaid bills if and when the moratorium ends? In an interview, PECO chief customer officer Funmi Williamson emphasized that the company was one of the first utilities to pledge not to cut off people’s power — even before the governor’s order forbade it. Williamson also noted that PECO has reconnected power to previously delinquent accounts during the pandemic.

What Williamson didn’t mention, though, is that in a recent letter sent to the PUC, PECO actually advocated in favor of ending the moratorium and beginning the account termination process. In that letter, a PECO official wrote that, if allowed, the company “intends to begin sending termination notices on July 20th and resume terminations for nonpayment on August 3, 2020″— a seemingly harsh threat considering we are in the middle of a pandemic and more than 2.1 million Pennsylvanians have filed for unemployment.

In a statement, a PECO spokesperson said of the letter: “Right now, our focus is to ensure that customers who have a large outstanding balance call us to discuss assistance programs to prevent future financial burden. Customer support measures will end at some point and PECO outlined potential plans in the event the PUC lifted its Emergency Order on July 1st. Our return to normal operations will be implemented in a manner that is sensitive to the health and financial issues facing our customers.”

There is currently a legislative effort underway in the state Senate to continue to protect consumers. Sen. Tom Killion, a Republican who represents Chester and Delaware counties, recently proposed a bill that would allocate part of Pennsylvania’s remaining $120 million CARES Act money to help pay people’s utility bills. Killion voted for the law that would end Wolf’s emergency declaration and the utilities moratorium, though he said he only did so because he rejects the business shutdown aspect of the order. “The Governor can issue new order, not on the shutdown, but on all the moratoriums put in place, and we wouldn’t oppose that,” Killion said of the Republican caucus.

But the fact is for now that the CARES Act money has not yet been allocated to help pay for utilities. And until that happens, there is just one obstacle — one that Republicans in Harrisburg have tried to eliminate — between the utility companies seeking to collect payments and terminate accounts of up to 850,000 people across the state: the Wolf emergency declaration.