Gig Workers Were Supposed to Get Unemployment Benefits. They Haven’t Received Any Yet.

Many gig workers and freelancers, waiting on pandemic unemployment benefits and without income for weeks, are down to their last dollars. 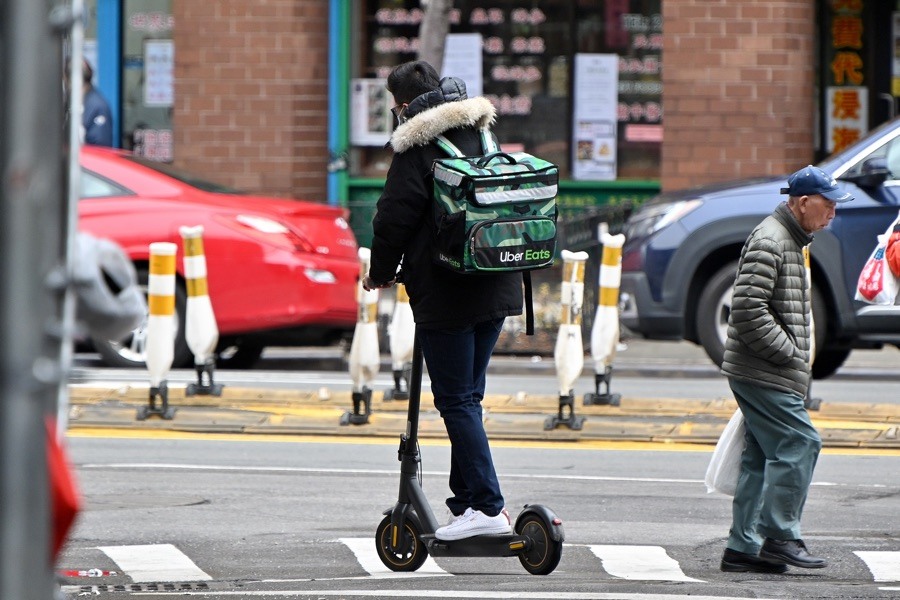 A total of 155,000 gig workers and freelancers have applied for pandemic unemployment benefits in Pennsylvania. The state is overwhelmed, and none of the workers have been paid. Photo by Dia Dipasupil/Getty Images.

It is a not-very-well kept secret that the gig economy exploits workers. Companies like Lyft, Uber, DoorDash and Instacart are all valued at billions of dollars, but the people who actually drop off the food or shuttle the passengers aren’t, at least in the company’s eyes, employees. This is because to call workers “employees” would be to open these companies up to expensive benefits that regular employers provide. Things like paying into unemployment trust funds, guaranteeing a minimum wage, and providing overtime payments, as well as other perks like health insurance and worker’s compensation. No wonder many of the gig economy “employers” have exerted considerable effort to avoid doing just that.

The American gig worker was in a precarious position well before the coronavirus pandemic. A 2018 report from the Federal Reserve found that nearly 60 percent of all gig workers in the United States would struggle to afford a $400 emergency expense. (The same was true for 38 percent of non-gig workers.) Adding to the economic insecurity of these gig workers, as well as other freelancers like performers and artists, was the fact that they were ineligible for unemployment insurance, since they didn’t have an employer paying into the unemployment trust fund.

The CARES act, passed by Congress in late March, was supposed to provide a short-term remedy. Freelancers — who comprise more than 30 percent of the U.S. workforce — were now eligible to receive unemployment aid. Though some states quickly began payments under Pandemic Unemployment Assistance, the new program for freelancers, in Pennsylvania, the website to apply for PUA didn’t launch until April 18th. Still, for some workers who by mid-April had already gone a month without any new income, the PUA promised at least a glimmer of relief.

Or so they thought. More than two weeks later, not a single PUA applicant has yet been paid.

James Jackson, a 42-year-old theater technician, was proactive when it came to seeking unemployment benefits. The day the PUA portal opened on April 18th, he was ready, armed with his computer and a speedy internet connection that allowed him to access the website, unlike the majority of applicants who arrived to find a crashed site.

The scene from inside the web portal wasn’t much better. Jackson logged on and found himself looking at questions that seemed to be pulled exactly from the regular unemployment form. Which of course made no sense when you were a freelancer. One of the first questions he was prompted to answer was, “Who is your employer?” Jackson wondered how he was meant to answer — by listing his many different work contracts from the past year, or by listing himself? The whole reason he couldn’t access regular unemployment in the first place, after all, was that he was considered self-employed. You could think yourself in circles, and the form provided no guidance.

There were other oddities. Anita Holland, another theater industry worker who lost a series of gigs at the Quintessence Theatre in Mount Airy due to the pandemic, was inputting various contracts from the past year, at which point the unemployment office asked why each “job” was terminated. The form presented some options: Suspended, fired, quit — “Everything,” Holland says, “except for ‘Completed the job.'”

Another obvious oversight: The PUA form asked applicants to upload all of their 1099s, the tax forms that most freelancers receive in lieu of employee W-2s. But, according to Jackson, the PUA interface only had room for nine uploads, even though it’s not uncommon for some freelance artists to have a much higher number of 1099s in a single year.

What to do then? You could try calling, but with the unemployment office dealing with thousands of calls per day — and a 25-fold increase in new claims, from 40,000 over the three weeks before the statewide shutdown to more than 1 million in the three weeks following — you needed a combination of divine intervention and boundless stamina just to reach someone. Carly Bodnar, a theater director and performer who worked at the Franklin Institute’s “Worst-Case Scenario Survival Experience” exhibit prior to the pandemic (which was in fact one of the worst-case scenarios), called one day in April, after she submitted her PUA application, and was confused to see a weekly benefit total of $195, the lowest allowable amount under the law. After 198 phone calls over a 20-minute span, Bodnar finally spoke to an employee, who told her — erroneously, it turns out — that freelancers would only get $195 per week, no matter their income.

When Jackson filed his application, he also ended up with a weekly benefit of just $195. He embarked on his own messaging marathon, reaching out to state representatives, the lieutenant governor, and other elected officials — most of which yielded nothing. (According to the state Department of Labor and Industry, the $195 is just a placeholder amount until staff can actually verify the true benefit award.)

Jackson wonders, though, why the state couldn’t at least start sending out that minimum $195 amount, along with the temporary $600 federal supplement. People need the money now: “One function of government is to protect the people, and Pennsylvania is not doing it.”

FOR Rideshare drivers, the news of the PUA has been met with a sort of bemused and detached irony. In the past few years, drivers across the country have been organizing in informal unions and advocating that the Ubers and Lyfts of the world classify them as W-2 employees so that they can receive protections like unemployment and a minimum-wage guarantee. With a few exceptions, those efforts haven’t been successful. It took a pandemic to open the unemployment system up for gig workers — and even that is temporary. The PUA is set to expire in December.

Even with the new PUA eligibility, it’s not always clear whether gig economy workers should apply for regular unemployment — which is considerably less clogged with applications — or the PUA. That’s because many gig workers do in fact have some W-2 income that is boosted by gig work. Angela Vogel, a 39-year-old Uber driver who lives in Kensington, is one of them. She drives 30 hours per week for Uber and supplements that income with stagehand work through Local 8 IATSE.

But Vogel says she doesn’t actually have enough W-2 income to qualify for regular unemployment. This is one of the many ludicrous paradoxes of the gig economy: Workers turn to the gig economy because it provides low-barrier employment for people who need money, but by doing so they also close themselves off from the unemployment support system that is a lifeline designed for people like them.

Since Vogel’s two streams of income were both dammed by the coronavirus, she’s been waiting for her PUA check. (In March, just 29 percent of all workers to apply for unemployment benefits in the U.S. received a check.) She also has yet to receive her federal $1,200 stimulus. In the meantime, things have been getting dire. “I have a little money to pay my utilities, and that’s it,” she says. “I have zero dollars after that.”

Vogel’s situation is far from unique. One Uber driver tells me she tried to cut costs by pausing her car insurance payments, only to realize she couldn’t: Her car was the only way she could pick up groceries at the food bank. Michael Ruggiero, who’s 37, is the only breadwinner for himself, his eight-year-old son, and his 87-year-old grandmother, all of whom live together in Northeast Philly. Fearful of getting his grandmother sick, he hasn’t worked a driving shift since early March. In the meantime, he has blown through his life savings of $5,000, taken out cash advances on credit cards to pay bills, and had to ask his parents for support. “I was extremely embarrassed,” he says. Ruggiero first applied for regular unemployment, was denied, then sought PUA assistance. Like everyone else in this story, he has received no communication from the state — not even an email confirmation — that his PUA application is being processed. The state labor department says PUA applicants will finally be able to file their weekly claims — the next step after submitting an initial application — by the end of this week. In theory, the checks should soon follow.

But even with relief apparently on the way, there is another pressing question for many freelancers, whether they’re actors or gig workers: Will the state ever cut off the benefits? What if, for example, a bunch of people start ordering Ubers and Lyfts this summer — will the state unemployment office suddenly decide that Lyft and Uber drivers are officially re-employed and have to either start driving or forfeit their benefits? Drivers have no idea how the state will handle these questions.

Asked about this particular scenario, a labor department spokesperson explained these decisions will be made on a case-by-case basis. “While a person generally may not refuse work by their employer only to remain on PUA and continue to receive those benefits, there are limited exceptions,” the spokesperson said.

“We don’t necessarily choose to be gig workers,” says Vogel. Before the virus hit, she was finally starting to think she could move on. She had a temporary job lined up with the Census. She also bought carpentry gear and spent money on trainings so that she might be able to work full-time as a stagehand. Now she doesn’t expect the theaters to open until next year.

“I did everything I was told to do,” Vogel says. “I went to college, I stuck with the same job. I picked up gig work and had multiple jobs lined up, just to make sure I would be prepared in an emergency.” She continues, “I can’t keep being told to do all these ‘right things’ and that everything will be okay, because it’s not.”

This story was updated to include a comment from the Department of Labor and Industry.