This is the ninth — yes, ninth — police department that the cop has worked for. He’s 31 years old. 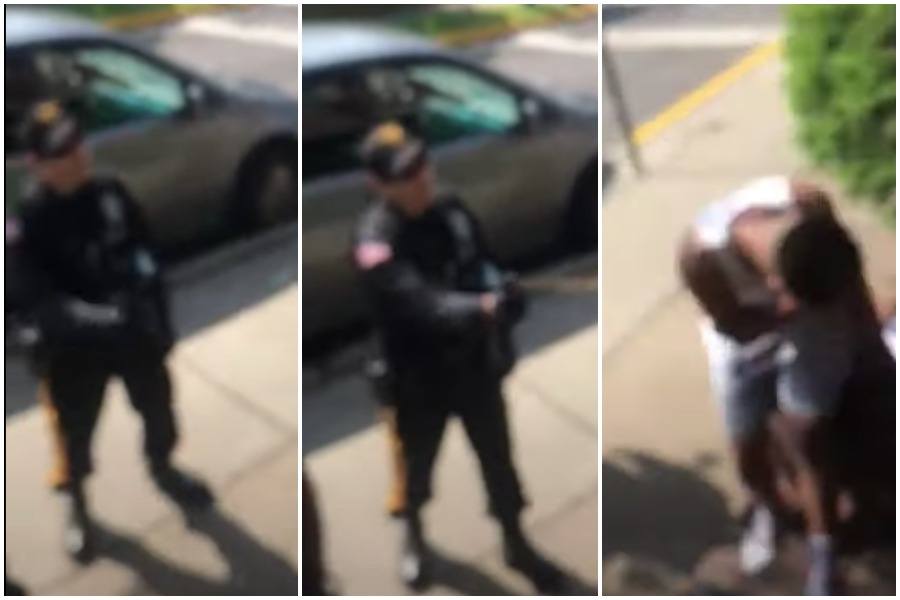 Woodlynne cop Ryan Dubiel is seen in a series of screenshots pepper spraying a teen who was just sitting on a stoop. (Images via YouTube; video embedded below)

UPDATE 1/14/2021: Ryan Dubiel has pleaded guilty to simple assault. He has been banned from holding any public job in the state of New Jersey. For the full story, go here.

The last time I checked, hanging out with your friends on a stoop was not on the list of activities that justify the use of “less-lethal” weapons by police officers. But that didn’t stop Woodlynne cop Ryan Dubiel from pepper spraying a teen.

Now, if you’re wondering where the heck Woodlynne, New Jersey is, don’t feel bad. I spent about ten of my formative years growing up in South Jersey, and I never heard of Woodlynne until last week, when video emerged of this incident. To answer your question, Woodlynne is a tiny borough that sits between Camden and Collingswood. It’s a ten minute drive from the Liberty Bell.

The incident took place last Thursday, June 4th, around 1:30 p.m. Dubiel and another Woodlynne police officer showed up on a small residential block where some teens were sitting on a porch. There was reportedly a call about people smoking marijuana in the area.

According to 6 ABC, Dubiel and the other cop began questioning the teens, the teens said they didn’t know anything about it, and after one of the teens said he was going to call his guardian, Dubiel just casually pulls out a can of pepper spray and sprays the teen with it. One of the teen’s friends was hit as well.

A bystander recorded the following video that day. Please note that this video graphically depicts the cop pepper spraying the teen:

On Wednesday, the Camden County Prosecutor’s Office announced that Dubiel has been charged with two counts of simple assault, simple assault being one of the most minor offenses that a person can be charged with.

“Our Special Prosecutions Unit received the Internal Affairs complaint against Dubiel on June 5 and immediately began collecting all of the evidence to conduct a thorough and impartial review of the complaint,” said Camden County prosecutor Jill Mayer in a statement. “After careful review, it was clear Dubiel’s actions are not consistent with the State of New Jersey use-of-force policy.”

The Woodlynne Police Department has suspended Dubiel with the intent to dismiss him. This is the ninth — yes, ninth — police department that Dubiel has worked at. He’s 31 years old.

Helen Gym Says Tear Gas Should Be Banned, City Says Not So Fast

On Wednesday, City Council held a hearing — on Zoom, of course — about Mayor Jim Kenney’s controversial budget proposal and other matters.

The hearing was long and glitchy the way that you’d expect a Zoom meeting of bureaucrats to be, and there was a lot to unpack.

But a couple of key points…

First, we learned that the deployment of tear gas during the George Floyd protests in Philly was given a general authorization on Sunday, May 31st, the day before the notorious tear gas incident on I-676. That authorization was made by what’s known as the “unified command group,” which is made up of several city officials, including Mayor Kenney and Police Commissioner Danielle Outlaw. The decision to use it on I-676 specifically was an on-the-ground decision by the office in command. But we now know that Kenney, Outlaw and the others gave the OK to use tear gas on protesters.

And then, there was a key moment when decidedly progressive City Councilperson Helen Gym pressed Brian Abernathy — he’s the city’s managing director and also a member of that unified command group — for a commitment to ban the use of tear gas in Philadelphia.

On the Zoom feed, it seemed like Abernathy wasn’t sure how to answer as there was a long, pregnant pause. But then Gym and the others realized that Abernathy’s feed had become frozen. Some jokes were made about it being convenient timing.

Later, Abernathy did return with an answer for Gym. No, the city will not ban the use of tear gas, he said, explaining that he didn’t think it made sense to “take out tools from the tool bag” available to police officers during true crises.

Governor Wolf vs. The Rest of Harrisburg

Harrisburg is normally a pretty boring place, but not so much these days as a major battle is brewing between Governor Tom Wolf and the legislature.

On Tuesday night, legislators passed a bi-partisan bill that seeks to officially bring to an end Wolf’s COVID-19 Disaster Emergency Declaration, with some legislators arguing that Wolf has completely overstepped his authority as governor.

“We have to end this emergency declaration,” said one state senator. “It is killing us. It is killing my business, killing my mental health. This is hurting our economy.”

That kind of rhetoric has been brewing for a while, especially among Republican legislators. But now they’ve actually managed to get the bill to pass both the House and the Senate.

Well, Wolf basically says that the legislature is full of it and that his emergency declaration will remain in place until he and Pennsylvania Health Secretary Rachel Levine decide otherwise. Lawmakers say he doesn’t have the power to veto the bill. Wolf says he does. And the whole mess is probably going to have to be resolved by the courts.