And here is the powerful message they brought home with them. 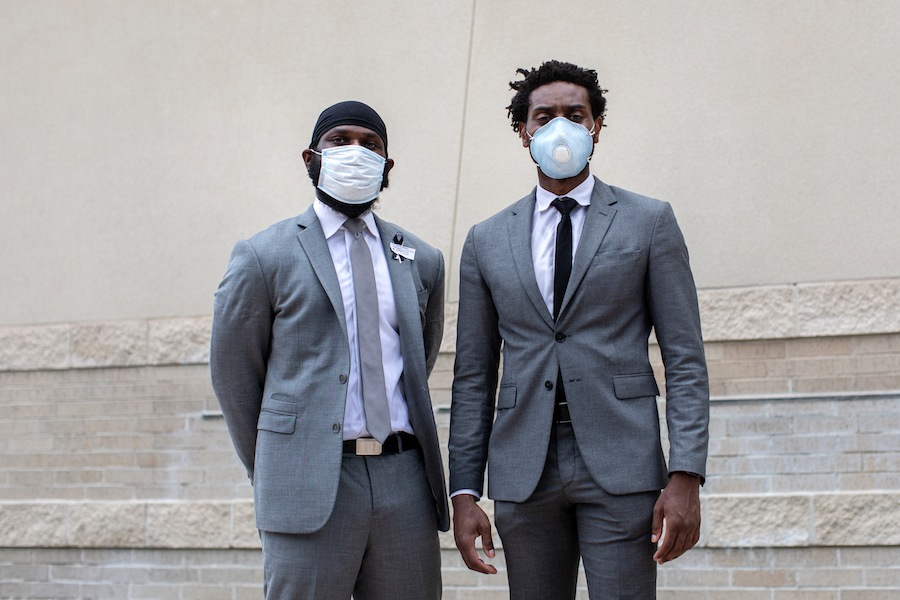 (Left to right) George Smith, 28, and Austayne Brown, 30, cousins who drove all the way from Philadelphia, PA, and Dover, DE, to Houston, TX, to attend the George Floyd funeral, stand for a portrait outside of The Fountain of Praise Church in Houston, Texas on June 8, 2020. (Getty Images)

After video emerged of a Minneapolis police officer killing George Floyd with a knee on his neck and as mass protests spread around the country, 28-year-old West Oak Lane resident George Smith says he became depressed and distraught. He avoided TV news. He stayed off of social media. But the feelings persisted. Eventually, he did what he’s always done when he needs to be uplifted: Smith called his cousin, Austayne Brown, who he says is more like a brother to him than a cousin.

“We call ourselves brother-cousins,” Brown says.

During that phone call last Thursday, the two spoke about Floyd’s death and the nation’s reaction to it. Brown, 30, had attended a small, peaceful protest in Dover, Delaware, where he lives. But Smith didn’t want to protest. He says he felt like he had seen the protests a million times before, and nothing ever changed. But he wanted to do something. He just didn’t know what that something was.

Brown told Smith that he had wanted to go to the Floyd memorial service in Minneapolis last week, but he wasn’t able to get out of a prior commitment. Then Brown mentioned that there was going to be a public viewing in Houston on Monday.

“And just like that, I automatically said, ‘We’re going,'” recalls Smith. “I told him to find a rental car and come pick me up in Philly. He thought I was crazy. But I said, ‘No, we are going to Houston.’ I wanted to see George Floyd laid to rest.”

So on Saturday, Brown, a counselor at a juvenile detention center, picked up a Ford Focus from the local car rental place. He drove up to Philly and picked up Smith, who works at a local branch of T.D. Bank, and the two left for Texas just after 7 p.m. on Saturday night.

“I drove for 17 hours straight off of sheer excitement,” says Brown, adding that they only stopped to get gas. “But my body just gave out, so my cousin took over the rest of the way. We arrived in Houston around 7 p.m. on Sunday night and checked into our hotel.”

On Monday morning, they made their way to the public viewing at the Fountain of Praise church.

“There was a lot to take in,” remembers Brown. “There were so many people. Thousands. Every single demographic you could speak of. The heat was absolutely treacherous, and we were all standing outside for so long, because they were only letting maybe 15 people inside at a time due to social distancing. But in line, people were connecting, sharing stories and ideas. There was mourning, of course, but it was also uplifting. A true celebration of life.”

The two lost track of time. Eventually, they made it inside the church and through the viewing line. But after Brown emerged from the church, he says that he just had to go back in again.

“The first time I went in, I thanked him for what he was able to ignite internationally,” says Brown. “But when I left, I felt something missing. I got back in line and waited again, because I needed to find out from him what he wanted me to do. And when I went back in, I got that message from him. What he did was accidental. He didn’t know what he was going to be. No one did. And I realized that if he was able to change the world by accident, how can I change it on purpose?”

Brown and Smith were originally just planning on attending the public viewing, because the private funeral was, well, private. But Brown was able to connect with one of the people in charge of the viewing and funeral, and once the man discovered that he and Brown were members of the same fraternity — Alpha Phi Alpha — he invited Brown and Smith to the private funeral the next day.

Smith says that listening to the speakers at the funeral made him realize that things really are going to change this time. And that we won’t get back to “business as usual” as we did all those other times that police killed unarmed black men.

“One of the speakers said that George Floyd’s name is now known in other countries, on other continents,” says Smith. “He actually did change the world. There are going to be buildings with his name on them. There are people who will put his name in the history books. They will name days after him. There will be a George Floyd Day. Yeah, this time is different.”

As the cousins drove back from Texas on Wednesday, somewhere in Virginia, I asked Smith what he was going to tell his friends, family and co-workers about his experience at the funeral.

“I think really it comes down to this,” he began. “This can’t be a hashtag or a slogan or a t-shirt. This is a change in our way of life. Period. We need to continue to have the hard conversations that we need to have to make the black experience a positive one and one where we don’t live in fear. We need to do this after it’s ‘trendy’ to do it. It will take months. It will take years. But we will do it. Together.”