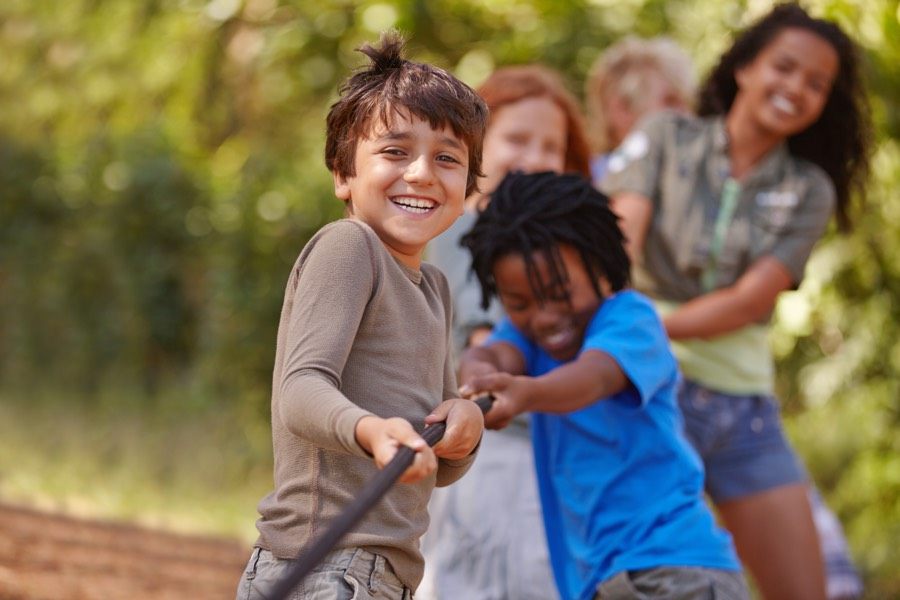 Will summer camps open in the Philadelphia region this summer? Should they? Photo: PeopleImages/Getty Images

Parents in the Philadelphia area are anxiously wondering whether summer camps will open next month — or at all this year — and if it’s even a good idea to send their children if they have the opportunity.

Penn Charter has canceled at least the first four weeks of its camp season. Girl Scouts of Eastern Pennsylvania canceled its camps through September in favor of virtual camp. Other large local orgs — like ESF Camps, which hadn’t announced its plans as of Tuesday — have yet to give an official word. Sesame Rockwood Camps in Plymouth Meeting, on the other hand, has said it will open just a week later than normal.

All camps in Pennsylvania are awaiting guidelines from the Wolf administration, which has yet to issue any formal recommendations on whether or not camps should open. A spokesperson referred us on Tuesday to the CDC guidance on summer camps.

In the meantime, we spoke with Drexel epidemiologist and visiting professor Michael LeVasseur, who weighed in on what protocols camps should enact if they do open as well as whether it’s a good idea to send your kid.

The takeaways? Outdoor camps are likely safer than indoor ones. We should delay camp openings — and reopening in general — until we’re able to collect more information through contact tracing. LeVasseur wouldn’t advise sending kids to camp. (Sorry, parents.) Oh, and you should absolutely keep a diary of anyone you’re coming into contact with as the reopening process begins.

Given what we know now, do you think it’s a good idea for summer camps to reopen in June?
Given what we don’t know right now, I think it’s not a good idea to reopen. Contact tracing is just getting started here in Philadelphia. I don’t know that by June we’ll really understand how many people are infected, where they’re getting infected, what the benefit is to wearing cloth masks. We’re not operating with a lot of information.

What’s the difference between opening in June as opposed to later this summer? Or in the fall?
I’m having the same sort of conversation with others about schools opening in the fall, and I hope the answer to those questions is that we’re going to be much more prepared then. I’m thinking camps will have protocols in place to maintain social distancing and maintain hygiene in June. But if I had kids, I don’t think I’d send them to summer camp. For example, we’re not entirely sure how effective the cloth face masks are yet. If we’re putting our faith in these cloth masks and have kids wearing them and they turn out not to be effective … well, I’d rather have faith in data and science rather than in covering my face with a t-shirt.

Would you advise parents to send their kids to outdoor camps rather than indoor ones? Is one safer than the other?
It’s hard to really know. But from the data I’ve been looking at, the majority of transmission is occurring in homes, in indoor environments. I would assume — and I’ll be honest here; we’re not flying with a whole lot of information — with all those caveats in mind, yeah, I think outdoor is safer than indoor. But I want to have the contact tracing really down before we can understand what we can do in our communities and what we can’t. That means knowing where people are getting infected and how they’re getting infected. I don’t know that we’ll have that in place by June.

Can you explain how contact tracing will work?
So the department of health put out job descriptions for contact tracers. In general, that team of people would gather information and ask those who contract COVID-19 questions like, “Can you list all the people you’ve been in touch with two to three days before symptom onset?” And then they will call up those people and inform them that they have been in contact with someone who has tested positive and they should get tested, and they would follow up with them throughout that process. That’s why, as we reopen our communities, I recommend that people keep a daily diary of those you’ve been in touch with and for how long.

Does it seem to you like reopening activities like camps early could make for a bumpier journey down the road? If we hold off on opening summer camps, might they be more reliably safe later on?
Yeah, and that’s the thing I have issues with. If it were February and we were talking about opening summer camps in three months, I’d be like “Yeah, we’ll be fine.” But it’s mid-May, and we’re talking about three weeks away. I just don’t think we’ll have the information. The other thing I’m concerned about is if we’re reopening now, just as things are starting to decline, we won’t have the capacity to do much contact tracing. If you have five people getting infected per day, you can trace them. If you have 100 people getting infected per day, it becomes much less manageable. We don’t even know what the infection rate is right now. We have estimates. But by the fall, we will know what’s happening. We’ll have a better idea of how many people are infected. And I’d even say that by July, we may have a better idea.

What sorts of protocols, at minimum, would you want to see set up to prevent an outbreak?
I’d want to know that they’re following the guidance of the local department of health. [As of May 19th, the state department of health had not released recommendations for summer camps. Contacted by Philadelphia magazine last week, a spokesperson said guidelines are “actively being worked on as we know many of these would typically start in the near future.”] I’d want to make sure that there’s been training among the counselors for proper hand hygiene. If you touch a surface you’re not familiar with, that’s the moment you’re supposed to wash your hands. I think there’s got to be a lot of education with kids about not touching your face when you don’t know if your hands are clean. And there’s got to be a lot of conversation, especially with counselors, about what the risks are. But if the children were placed in glass boxes and they could just see each other and wave, I wouldn’t want that, either. I would probably say not to send kids to camp right now. Which is maybe not an option for everyone.

What would you say to parents who feel there’s no other option but to send their kids to summer camps?
As an epidemiologist, I wouldn’t advise parents to send their children to summer camps. But as a citizen of the world, it’s not that simple. Kids are going stir-crazy. I have friends with young children, and they’re losing their minds. And these are people who have a backyard — I can’t imagine what it’s like if you don’t have an outdoor space. Kids need to go out and play. They need to socialize. There’s another side of this, which is, what’s the difference between kids going out to play vs. a summer camp? Maybe it’s just because summer camp is structured that it feels different. Because I doubt kids are going to stay inside all summer anyway.

I live across from a really nice park, and there’s a big basketball court, and usually people are out there year-round playing basketball. But there hasn’t been anyone out there for months. I’m not sure how risky playing basketball is. I’d like to know if anyone has been infected playing basketball. It’s interesting, because one of the first signals we got that COVID-19 was in America came from the NBA — but was that from playing the actual game or from being in a place together?

If basketball isn’t safe, what games are safe? What would “safe” outdoor camp activities be?
Duck duck goose with a broom? I mean, a lot of these activities require close contact. As for protocols, one of the questions people have about reopening schools is, “Is there going to be adequate testing?” According to the recent Senate hearing, we should have adequate testing by the fall, but are we testing once a week? Once in the beginning of the year? It’s the same thing with summer camps. Are we just going to have temperature screenings? I don’t know how those kinds of protocols will work.

What steps should camps take to mitigate a COVID-19 breakout if one does occur?
I would listen to whatever the department of health has to say about it, because at that point, they’ll be the ones doing the contact tracing. But I assume camp leaders will shut down the camp for a short time if someone associated with the camp contracts COVID-19. Those infected and those they came into contact with will go into quarantine.

Are you worried about the reports of some children getting sick from an inflammatory syndrome connected to COVID-19?
It came to mind throughout this conversation. It appears to be affecting children between two and six years old and potentially occurs four to six weeks after initial exposure to the coronavirus. But this is new. We only got the first reports of this out of Europe in late April. We don’t know what the burden of this looks like; we only have a general idea of the clinical course. I believe the CDC is now collecting information, and we’ll have a better sense of how big of a problem this is in a week or so. If it turns out it’s more common than expected and it’s some sort of autoimmune response, I’d be a lot more concerned. But as of right now, I’m no more concerned about it than I am just the regular coronavirus.

What’s the take-home message?
The take-home message I have right now for this pandemic is really that it’s the indoor transmission that’s driving this. And that’s why I’m mostly concerned about nursing homes and homeless shelters. But with these group outdoor-activity settings, I’m not really sure. I had a happy-hour event with my choir on Zoom. We’re starting to talk about what the future looks like. There isn’t much of a way forward for choir, because we meet in an enclosed space for a very transmittable activity. So can we get together and sing while wearing masks in the park? It’s not just summer camps dealing with these conversations; it’s a lot of the way we exist as a society. We just don’t have the answers yet.