Chuck Peruto Explains Why He Must Run Against Larry Krasner for Philly D.A. 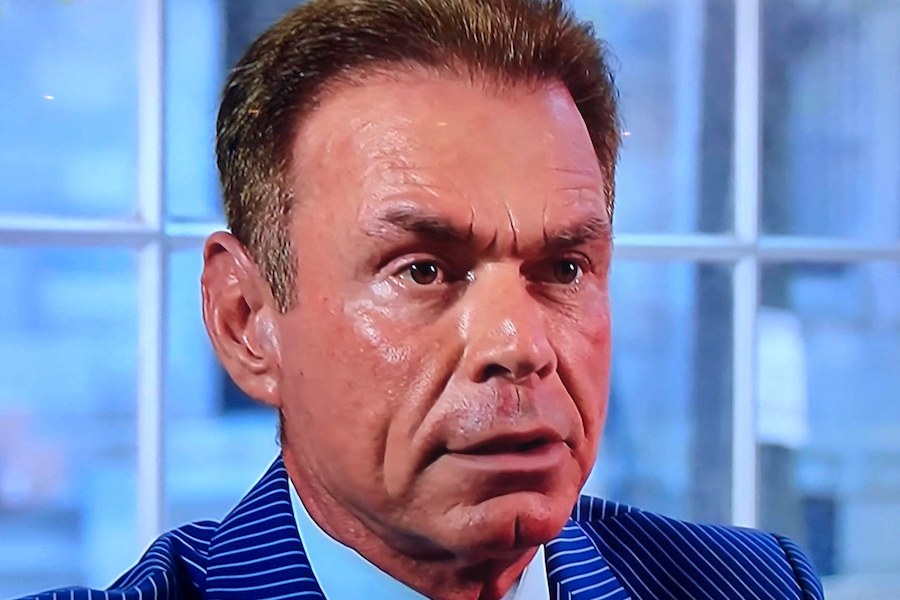 Though we have a lot to get through before then — e.g. coronavirus and, you know, picking a president — Philadelphia District Attorney Larry Krasner will be up for reelection next year. And guess who intends to run against him? None other than Chuck Peruto, the Rittenhouse Square-based criminal defense attorney who has represented the likes of Gary Heidnik and Joey Merlino, among countless others. We caught up with Peruto after his afternoon Peloton session to learn more.

Philly Mag: I saw you post something recently on Facebook about your desire to run against Larry Krasner. And I have to admit, I assumed it was a joke or just you venting.
Chuck Peruto: I’m not joking at all. A lot of people run for office and voters don’t really know where they stand on issues. So at 5 p.m. one day, I just started typing away, writing my position paper. I finished around 3 a.m..

Wow, late night.
This guy gives me energy to write about him, to criticize him, and to run against him.

Did you vote for Krasner in 2017?
Yes. I did. But I didn’t know where he was going to truly stand on things. I thought that a defense lawyer like him — well, he was more of a civil rights lawyer, but he did do defense work — I thought that he’d have some good ideas coming on the heels of having a fat crook in the office by the name of Seth Williams.

But I had no idea he would turn out to be this liberal. Let me tell you: I have been a registered Democrat my entire life. But when it comes to the DA’s office, I don’t care about party. It’s about doing the right thing. It’s not about doing what you feel like doing. You are supposed to be an advocate for the victims of crimes. The fact that you think somebody might be innocent is absolutely irrelevant. You are supposed to let the people decide.

Just as a quick aside regarding Seth Williams: he’s scheduled to get out in September, I think. Any words for him?
I’ll be the one driving the limo that will pick him up. He may not make it to the halfway house. You can print that.

Okay then. You mentioned the Democratic Party. Are you not running against Krasner as a Democrat in the primary?
No. For the first time in my life, I have switched parties. I am now a Republican.

Why not just run against him as a Democrat?
I truly want to unseat him, and I don’t have any George Soros money. If Larry Krasner loses his party’s nomination, then I will not run against the person who beats him. I intend to position myself just in case he wins the Democratic nomination. He is the only person I wish to run against. I don’t have some idea in my head that I must be the DA of Philadelphia. I just must be the DA if Krasner is the only other choice.

So just to be very clear, you are saying now that Chuck Peruto 100 percent will not run for DA if Krasner is defeated by a Democrat in the primary in 2021?
That’s right. Yep. I won’t have a desire. He is the only one fueling my desire. People have criticized me widely for my positions that are on my position paper. I’m told they are old school and that they won’t work. Well, I am not going to change them. At least you know who you are voting for. People are going to know what they are going to get. They can decide for themselves. 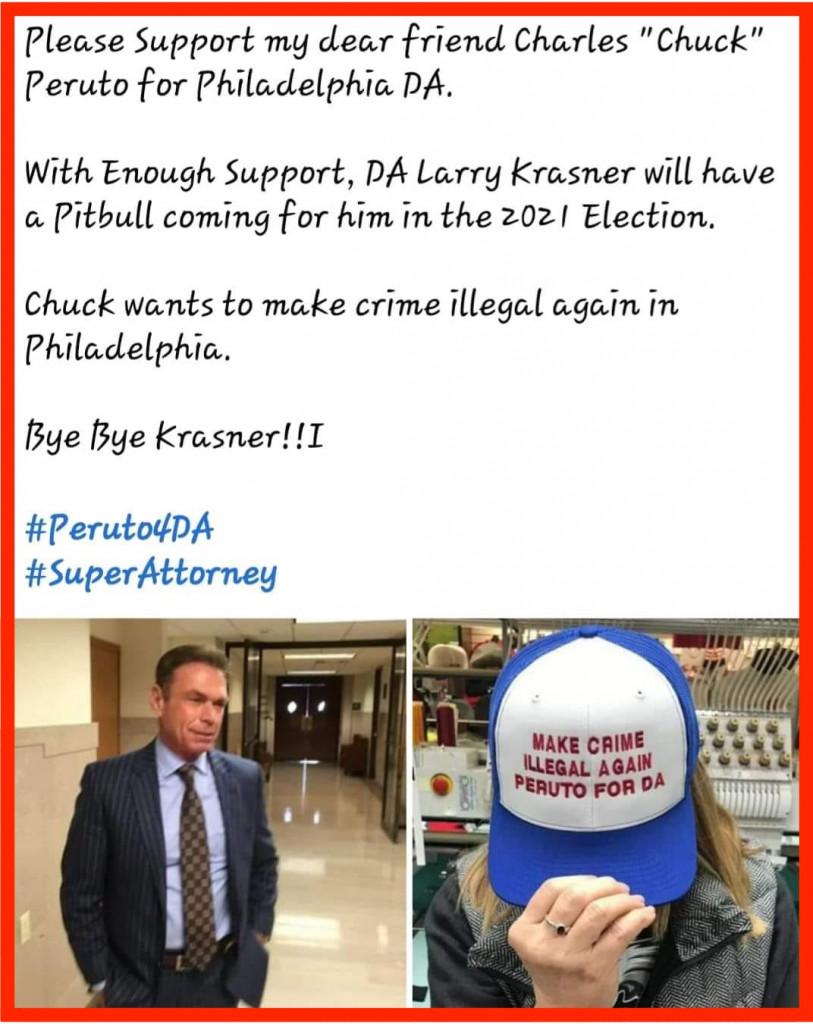 Are you going to pull a Bloomberg and fund your own campaign?
Honestly, I won’t need to. People are really excited about the idea of me running.

Let’s talk about your positions and where you think Krasner went wrong.
The straw that broke the camel’s back was the safe-injection sites. That’s an oxymoron of the highest degree. There can be no such thing. It’s just a gathering place of people talking about where they got their drugs, how much they paid, and finding out where they can go to get more. It breeds drug dealing. It breeds an illegal market enterprise.

And I know you have some strong opinions about Krasner’s relationship with Philly police, right?
Larry Krasner made a career as a civil rights attorney out of suing the police. He really does truly hold animosity. Larry treats police like second-class citizens. He doubts their word. In some cases, he’s judge and jury. That’s not what a DA is supposed to be.

My relationship with the police would be totally different. Just because I am a criminal defense lawyer does not mean that I’m not friendly with police. We laugh and joke together every day. We know what’s going on. And we know the reality of the streets.

The district attorney should be in partnership with the police. The opposite is happening today.

Somebody breaks into your car and takes your valuables? They need to be prosecuted. Somebody spray-paints a racial epithet on the wall of a business that is owned by a white person, they need to be prosecuted. So many cases are not being prosecuted after an arrest by police, because Larry is the judge and jury. Basically, we do not have — he has removed the adversarial process where the defense argues and the prosecution argues and the jury decides. He agrees with the defense in so many of these cases that it’s mind-boggling.

How would Chuck Peruto handle the opioid crisis in Philly?
It was broken before Larry took office, and he made it 10 times worse. Junkies need to get a fix, they steal, they rob. Possession of heroin is illegal. You arrest them. Force them to detox. You put them in prison. And then you tell them: You wanna go free? You get a drug test every other day. If we save 20 percent of them, we did a good thing. Families who have drug-addicted people in them will at least know where their loved one is. Behind bars. Otherwise, he’s on the street, where he can die any day. You gotta get tough.

You’ve also been critical of how Krasner has handled gun crimes and violent crimes.
His plea bargains are way too soft. If you carry a gun without a license, you are automatically up to no good. Law-abiding citizens now feel the need to carry a gun, because they don’t feel safe. It’s up to the DA to make them feel safe. I would mandate and proclaim that anybody caught with an illegal gun will not just get a slap on the wrist or probation. They will get at least a year — on a first offense. And if they brandish it or threaten somebody with it, they will do more. Again, on a first offense.

What from your past do you think Krasner would try to use against you? In terms of opposition research and negative advertising.
Well, not everybody had a girl die in his bathtub. That will be resurrected. There is always a certain amount of a population that reads only a headline and not the full story. What most people don’t realize is that a grand jury found that she had blood alcohol poisoning with a .40 blood-alcohol level. That’s how she died. And then she expired in my bathtub. I wasn’t there, but I own the real estate. I have to deal with it. I’m a big boy.

There are also lots of photos of you out and about with women much younger than you.
Hey, if that’s a crime, then I want to be the DA just so I don’t get prosecuted. [Laughs]

Finally, when was the last time that you spoke with Krasner?
It was at a Christmas party last year. Listen, I’m friendly with the guy, and I will continue to be friendly. I don’t think he’s a bad human being, just like I don’t think Jimmy Carter is a terrible human being. He was just a terrible president.