Plus, Kenney calls out Krasner. 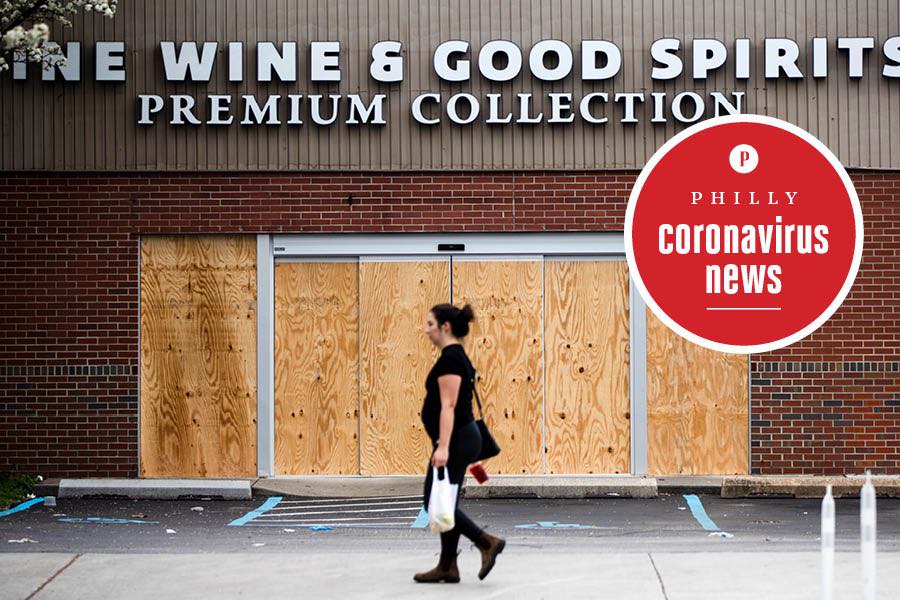 A boarded-up wine and spirits store in Philadelphia during the coronavirus crisis. (AP Photo)

UPDATE 4/1/2020 6 p.m.: Governor Wolf has announced that online PLCB sales are back. We are waiting for more details.

Getting Booze in the Age of Coronavirus

In these heady days of the coronavirus in Philadelphia, we get asked a lot of questions. One question we hear the most: Is it true that the state stores are reopening?

The reason for this confusion is that after the state shut down the state stores, there were reports that Governor Tom Wolf was reconsidering his decision. Experts presented Wolf with information about alcohol withdrawal, suggesting that the closures could inadvertently lead to death. And there were rumors floating about that a limited number of state stores would reopen with limited hours.

But according to Pennsylvania Liquor Control Board spokesperson Elizabeth Brassell, the PLCB is not considering reopening even a single state-controlled wine and spirits store. The PLCB is reconsidering “the resumption of limited online sales,” says Brassell.

So Where Can I Buy Alcohol?

Of course, you can already order online from Philadelphia’s distilleries, which have not been shut down by the state. The distilleries are doing delivery via FedEx, and some also offer curbside pickup as well.

We mentioned this option to somebody who was complaining that he forgot to get booze before the state stores closed. But the distilleries are so damn expensive! was his reply. So we told him to go to the corner store and get a six-pack of Bud Ice.

Speaking of beer, don’t forget that takeout beer is still available pretty much everywhere that it was available before coronavirus hit — well, other than your neighborhood bar. And you can get beer and wine at many local grocery stores. We visited a Delco Acme the other day, and while they were out of toilet paper, there was plenty of beer.

Plus, there’s always New Jersey and Delaware for booze. True, you’re not supposed to buy booze there and transport it back to Pennsylvania, but, well, people are doing it. In droves.

Given the current ridership numbers, the chances are that you aren’t spending much time on SEPTA these days. But if you do need to ride the bus or trolley, you should know that there is no more on-board fare collection, meaning SEPTA buses and trolleys are now free.

SEPTA is also asking all passengers to board by the rear door of buses and trolleys to minimize drivers’ exposure to passengers. And new rider limitations are in effect: only 20 passengers on a bus simultaneously. That number jumps to 25 for trolley riders.

Please don’t think that SEPTA has made its buses and trolleys free as an incentive to ride them. No, very much the opposite.

“During the COVID-19 crisis, SEPTA will remain focused on providing transportation for essential workers, and for customers who need access to health care, grocery stores and other life-sustaining services,” a SEPTA official said in a statement. “For everyone’s health and safety, we ask that all others refrain from using SEPTA.”

So if you don’t absolutely need to take SEPTA, don’t take SEPTA.

Larry Krasner has had quite a few detractors since he became the District Attorney of Philadelphia. Well, those detractors actually started detracting before he even won the election. But who’s keeping track?

Mayor Jim Kenney has generally been on Team Krasner. But on Tuesday, Kenney called out Krasner after five people — including a baby — were shot at a North Philadelphia rowhome.

Since Krasner has developed a well-earned reputation for being soft on criminals, including those with illegal guns, Kenney implored Krasner to go after anybody charged with a gun-related crime.

“We are calling on the district attorney to vigorously enforce all firearms-related charges during this time of crisis,” Kenney said on Tuesday. “It is imperative that we send a clear message: Gun violence will not be taken lightly.”

But Krasner’s office didn’t seem to understand why Kenney was calling him out.

Krasner’s office “has vigorously prosecuted and has not declined to charge a single individual arrested by police during the COVID-19 emergency for a shooting, homicide, or other violent crime,” his office said in a statement, adding that the office “has declined to charge 11 individuals for lesser offenses during this time period, mostly due to insufficient evidence to proceed.”

As it stands right now, there are about a zillion options in the region for takeout and fast food drive-thru joints —because a Whopper is obviously essential during this time of the coronavirus crisis, right?

Since we don’t want you to spend the next weeks and months at home eating crappy takeout food, we’ve started a new series called “Order In.” It focuses on some of the better places offering takeout or delivery. Because Malaysian food from Saté Kampar sounds perfect right about now.