Sanders? Warren? Biden? Philly’s former mayor says none of the above. Tagging along as Mixmaster Mike stumps for a billionaire New Yorker 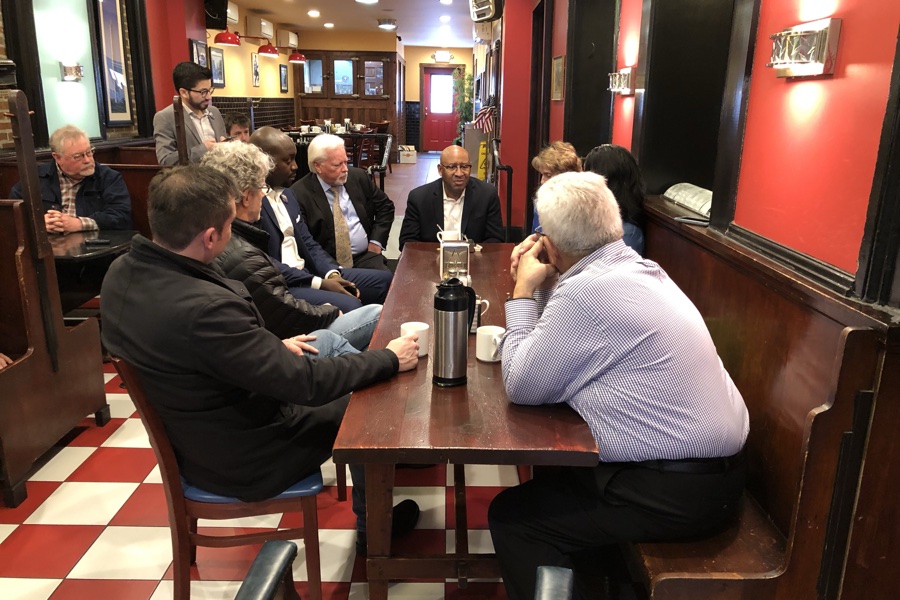 On the Monday before the Iowa Caucus, most presidential campaigns were doing one of two things: parachuting in and out of the Hawkeye State’s 99 counties for some last-ditch convincing, or rueing that their candidates were chained to their desks for an impeachment trial.

Mike Bloomberg’s campaign was doing neither. The former three-term mayor of New York City, as part of his unusual strategy to altogether avoid the early-voting states of Iowa and New Hampshire and instead focus on the slate of 14 Super Tuesday states voting on March 3rd, spent his day in Vermont and Maine. The day before: Florida. A few days before that, Minnesota.

Covering so many states, however, isn’t without its challenges: Even a billionaire can’t be in two places at once. So Mayor Mike Bloomberg has come up with the next best thing: enlisting a different mayor named Mike — Philly’s own Mike Nutter — to be his top campaign surrogate and to help spread the gospel.

Which is why Mike Nutter, fresh off the 7:16 a.m. Amtrak from Philly, finds himself 40 miles outside D.C. at the Leesburg Diner, a retro joint whose wall decorations include an accordion, a banjo, and a portrait of Elvis. (Bloomberg’s campaign strategy may be unconventional, but it’s not so unconventional as to eschew an American campaign stop as quintessential as a kitschy diner.)

If Nutter, wearing a plain dark suit (no tie) and a Columbia ball cap, is tired, he doesn’t show it, jumping immediately into political schmooze mode. He sees a baby in a corner booth and crouches down to say hello; later, a woman from the table approaches me and asks, “Who is that guy?” The answer will come soon: Nutter dispatches an aide to pass her a “Bloomberg 2020” pin.

The real reason Nutter is here is to pitch Bloomberg to 10 on-the-fence members of the Leesburg political class — the sort of people who, Nutter tells me later, “I’ve come to refer as ‘Mike curious.’” He doles out earnest, unrelentingly kind handshakes to each of them. (Nutter has a sort of superpower when it comes to the handshake. His eye contact alone would put Medusa to shame.)

When Nutter begins the sales pitch, you start to understand why he endorsed Bloomberg in the first place. As mayor of New York City, Nutter tells the group, Bloomberg cut the homicide rate by 48 percent, increased high-school graduation by 43 percent, and reduced the city’s carbon footprint by 14 percent. Now think back to some of Nutter’s most notable actions as mayor: declaring a crime emergency, taxing cigarettes to fund the school district, introducing a $2 billion green stormwater infrastructure program. The similarities are all right there.

Nutter had been prodding Bloomberg to run for president since January of last year. At first, Bloomberg wavered. Then, around November, Nutter says, “Mike became extremely concerned as to whether or not any one of the candidates would actually be able to beat Donald Trump.” Nutter helped craft a critical pre-announcement speech before the campaign took off: a Bloomberg apology, delivered at a black church in Brooklyn, for using stop-and-frisk during his term as mayor.

Not long after, Bloomberg declared his candidacy and asked Nutter to be his national political director. Nutter said yes.

Mike Bloomberg and Mike Nutter first met in the summer of 2007. Nutter had just won the Democratic primary in Philadelphia and was looking for mentors. He spent a day shadowing Mayor Bloomberg in New York. “We talked about what it takes to run a big city,” Nutter says. The takeaway: “Set clear priorities as early as possible.”

The meeting was Nutter’s initiation into the brother-and-sisterhood that is mayor-dom. No wonder, then, that he now thinks the skills of a mayor translate to the presidency better than do those of almost any other elected office. “There are not many political jobs that are more serious than being a mayor,” he says. “You are responsible for virtually everything that happens in your locale.”

Perhaps that’s how to best understand the (abridged) list of cities whose mayors have endorsed Mike Bloomberg: Akron, Augusta, Chula Vista, Louisville, Memphis, San Jose, Schenectady, Tacoma, Washington, D.C. (If only mayors elected the president!) You could also float an alternate theory: Those nine cities have all received support from Bloomberg Philanthropies, Mike Bloomberg’s deep-pocketed charity that funds a variety of good-local-government initiatives.

Philadelphia, you’ll note, isn’t on the list. That’s because our current mayor, Jim Kenney, has instead endorsed Elizabeth Warren, venturing about as far away from Bloomberg on the political spectrum as is possible. (Warren’s official campaign, after all, sells a mug labeled BILLIONAIRE TEARS.) In some ways, the endorsements from current and past occupants of City Hall are exactly what you’d expect: progressive Kenney supporting progressive standard-bearer Warren; technocratic Nutter supporting mild-mannered technocrat Bloomberg. And then you have another former mayor, Ed Rendell — though he’s considerably less involved in the campaign — who has thrown his weight behind the centrist candidate from his own generation: Joe Biden.

On the campaign trail, Nutter frames Bloomberg in sort of the same way Biden has framed himself: as a return-to-normalcy candidate who will shepherd us to a more tame, less divided America. “We’re not talking to each other; we’re talking past each other,” Nutter tells a group of 20 businesspeople over a lunch of Panera and La Croix in the D.C. suburb of Tysons Corner, his second event of the day. “Mike is a person that brings people together.” (Nutter is too busy talking to eat, but he manages to escape with two chocolate chip cookies in hand.) 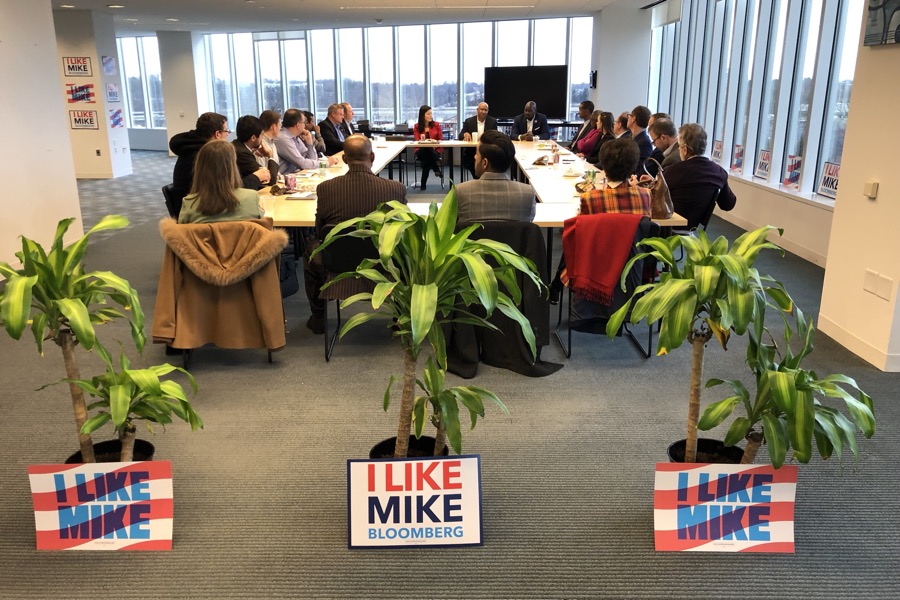 Mike Nutter speaking to a group of businesspeople outside Washington, D.C. Photo by David Murrell.

The unity message might play in a glass-walled conference room with a view of the Beltway, filled with start-up types. But it’s hard to imagine Philly — a city whose recent lurch leftward has been signaled by the elections of Larry Krasner and Kendra Brooks — buying in. Later, I ask Nutter what he thinks about the Democratic Party’s move to the left and whether he blames the new progressive wing of the party for the decline in discourse.

“No,” he says flatly. “People are where they are based on whatever their experience is.” He continues: “Both parties are being pulled significantly in basically opposite directions. But a significant number of Americans are still either center-left, center-right or just dead-center. They’re basically trying to figure out what in the hell is going on. Many people are less ideological; more fundamentally, they just want things to work.”

In trying to capture those centrist voters, Nutter rarely invokes anyone other than Mike Bloomberg. He refers to Donald Trump not by name, but as “the current occupant of the White House.” The closest he comes to repudiating the Sanders and Warren worldview is when he says, quite strategically, to the start-up leaders, “I’m not sure when we reached the point in this country when making money was a bad thing.” Later, he’ll reaffirm for good measure that Bloomberg is “absolutely still a capitalist. He’s not a socialist.”

Nutter likes to say that Bloomberg is “running a general election campaign in the primary and caucus season.” The theory is that while the other candidates are bunkered down in Iowa and New Hampshire, Bloomberg is making the face-to-face voter connections everywhere else that just might linger. (It also helps to supplement these interactions, as Bloomberg has done, with $300 million of TV and online ads.) Though Nutter argues that “you don’t have to tear someone else down to build yourself up,” one can’t help but wonder if, with at least five other serious candidates in the field, the reluctance to spar with Democratic opponents is a mistake.

There’s also a more existential question at play for the Mike-and-Mike political duo: Do the two mayors even complement each other? They’re both wonky technocrats; neither is an inspirational orator. (Well, save for Nutter’s occasional appearances as Mixmaster Mike.) And if you boil it down, one of the main jobs of a campaign surrogate is to rally the troops.

Sure, Nutter can talk shop to a group of four D.C.-area transit advocates, as he does at his fourth and final speaking event on this Monday, held in a cramped conference room inside the just-opened Bloomberg field office in Arlington. These are his people — the kinds of folks who can say, with a totally straight face, “I keep wanting to hear an argument for infrastructure that … makes it more of a sexy topic.” Nutter kills with this group. The hitch is that over the course of seven hours and four separate events, he’ll speak to no more than 50 people.

Through a combination of TV appearances and bigger speeches, Nutter says, he reaches many more people on other days. Still, the four-event, 50-person schedule seems to neatly capture the campaign’s philosophy. “There’s not a lot of flash, not a whole lot of excitement,” Nutter says of Bloomberg. “I think for many of us, at this point in time of our lives, we could use a little less excitement from the White House and a whole lot more productivity.”

I follow up with Nutter a few days later. In that time, he’s already racked up what feels like a year’s worth of frequent-flyer miles juggling his campaign duties and other commitments: North Carolina on Tuesday for more campaigning; New York City on Wednesday to teach a course at Columbia, where he’s still a professor; on Thursday, UChicago, where he’s still an executive fellow in the school of public policy. It is, by any objective measure, an insane amount of travel — especially in service of a Bloomberg campaign that’s polling at eight percent nationally and that most political pundits still regard as quixotic.

Nutter would beg to differ. “I absolutely think he can win,” he tells me. And he has a neat little counter-argument for all those Bloomberg detractors, too: “In a world where Donald Trump is president of the United States of America,” he says, “anything is possible.”