Stop Telling Black People the Mummers Parade Is Racist. Do Something About It.

The most infuriating thing about another year of Mummers in blackface is the predictable outrage from “woke” white people. My response: What are you actually going to do this time? 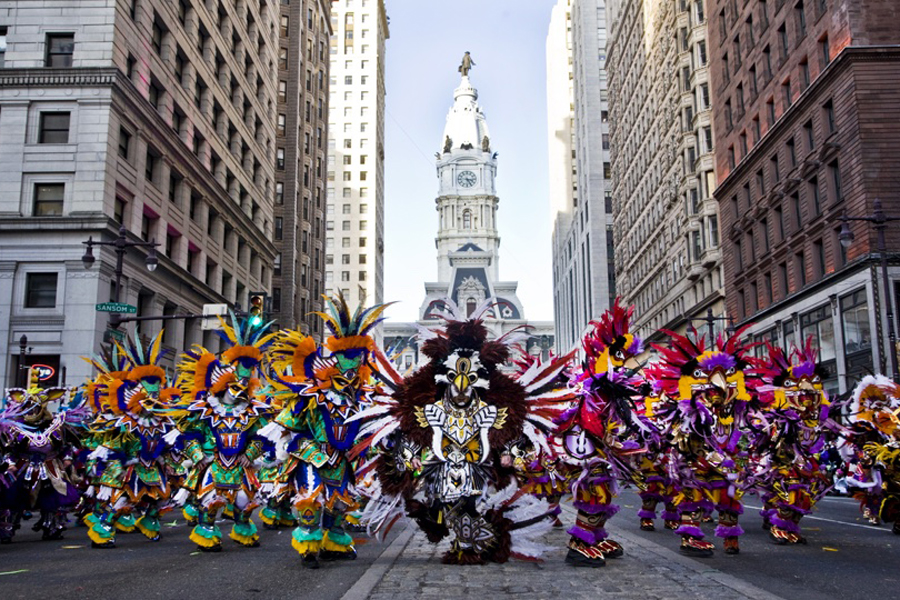 Conversations surrounding blackface and the Mummers should feel like déjà vu to everyone by now.

Last year, there was much outrage after the Mayor’s Office and our city’s predominantly white newsrooms doubled down on minimizing the offense taken by communities of color when a Black Mummer was arguably used as a minstrel prop in a sketch mocking Jay-Z and the mayor. And that was after complaints of cultural appropriation and racist performances a few years ago had prompted city-enforced sensitivity training for all Mummers. I attended a Mummers Parade the year after those trainings and still spotted several questionable actions, which eventually led to me choosing never to attend the parade again.

This time around, Froggy Carr, a South Philly–based wench brigade, got disqualified after some members openly wore blackface.

Mayor Jim Kenney, a former Mummer himself, condemned their actions on Twitter Wednesday afternoon as “abhorrent and unacceptable.” And while the mayor never quite got around to the term “racist” in his scolding, it was clear that he wasn’t letting them off the hook this time, as many think he had in previous years.

The use of blackface by someone affiliated with Froggy Carr today was abhorrent and unacceptable. This selfish, hateful behavior has no place in the Mummers, or the city itself. We must be better than this. The group was disqualified and we will be exploring additional penalties.

While most of the reaction I saw online on this New Year’s Day was the predictable back-and-forth of people of color having exhausting arguments with white gaslighters about why a racist act like donning blackface, whatever the intent or excuse, is actually racist, an even more infuriating thing was happening in my inboxes.

Here are some of the messages I received from white social media followers of mine sharing articles about the Mummers incident:

“Can you believe this?”

“Now this is ACTUALLY racist. Something should happen to them.”

“Hey! Didn’t know if you caught this, but can you actually believe this racist shit is still happening?”

My short answer to all of these remarks: Yes, I can believe all of this is still happening, because I’ve been Black my entire life.

It annoys the fuck out of Black people when you send us racist articles just to get our reaction.

We've been Black our entire lives.

This wasn’t happening to me just because I am a journalist whom folks felt like they had to make aware of the incident — white people putting me on the spot to give them my instant reaction to racism is a phenomenon I have been experiencing in person and online my entire life.

Whether it was being the only Black person in a Penn lecture hall and asked to explain how Black Lives Matter doesn’t mean that white lives don’t matter, or being asked on the SEPTA train what I thought about some racist comment Trump made, it’s always been mentally exhausting. It’s like going to a cheap restaurant where the waiter keeps asking you every five minutes if the meal tastes fine, as if they know it is prone to being a disaster. White people reflexively checking the racial temperature of their Black and brown peers without any intention of using that information to do something is as toxic and triggering as being actively marginalized.

Seriously, what am I supposed to say when being asked “How do you feel about the Mummers wearing blackface?” for the hundredth time? I’m convinced that this desire for confirmation of Black outrage from white people serves as an ego booster more than a resolution. When white people seek affirmation from me on the racism that they can see with their own eyes (and not mine solely as a Black person), they are telling me more about them than concerning themselves with the pain I actually face.

This self-centeredness is itself racist. Because simply asking me how I feel without going a step further to address it with your privilege, power, resources, and/or courage does nothing than just reinforce the trauma I’m already experiencing. If you are white person who is upset with the Mummers wearing blackface, don’t ask me how I feel — do something about it or shut up.

After reading (and deleting) several emails from white folks who vented to me about what they saw and asking my thoughts, one message in particular stood out to me.

It was from a white guy who said he had read the op-ed I wrote criticizing the racist history of the Mummers parade. He told me that after reading it he decided to forward me a long letter he had written to the mayor in which he critiqued the financial investment the city has given to the Mummers parade over the years while also asking him to end the festival altogether over its racist history.

Rather than just asking me the obvious, he did the unexpected.

In 2020, more white people should do the same thing when it comes to addressing racism in this city.