Blackface was never solely about white performers in makeup. Why are the City of Philadelphia and Philadelphia’s white media ignoring this? 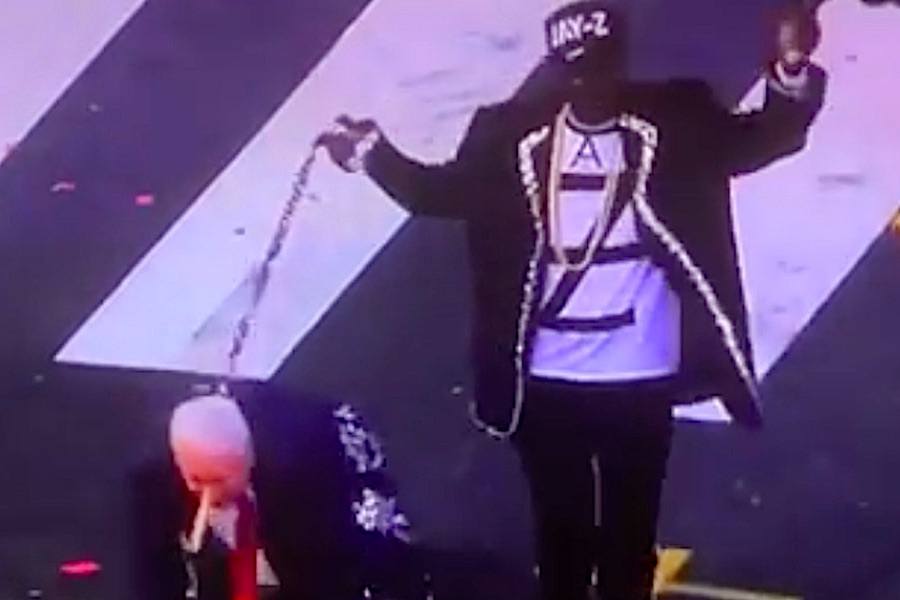 “Jay-Z” leads “Mayor Jim Kenney” around by a leash during the Mummers Parade in Philadelphia. (Image via screenshot)

On New Year’s Day, costumed Philadelphians made their way down Broad Street for the 119th installment of the Mummers Parade. The flashy looks and funky performances that characterize the long-running tradition were back for another sunny day of celebration — as was minstrelsy.

People across the city are confused about a particular skit put on by the Finnegan New Year’s Brigade and whether it’s yet another chapter in the Mummers’ dark history of blackface minstrelsy. Let’s set the record straight: It unmistakably is. History shows us that blackface minstrelsy is not dependent on the race of the performer, but on the character’s tendency to promote harmful portrayals of blacks in an entertainment context.

The skit featured black Mummer and Finnegan New Year’s Brigade member Darrel Young as Jay-Z, along with a white fellow Mummer who played the role of Mayor Kenney. In the skit, Young walked “Kenney” like a dog in a nod to last year’s Made in America debacle and an editorial cartoon by the Philadelphia Inquirer’s Signe Wilkinson, which parodied the controversy at the time.

Young has since penned an op-ed for the Inquirer, claiming that because he is black, “There was no blackface involved.” The Mayor’s office even released a statement suggesting that because a black man played the role of Jay-Z, the Mummers didn’t violate the blackface ban, which was instituted in 1964: “The Finnegan group submitted its concept in advance of the parade, representing to both the City and Mummers organization that the performer portraying Jay-Z would be an African American male and would not be dressed in blackface.”

The city’s words reveal a glaring lack of cultural competency. The fact that a black man played the role does not make the skit any less offensive, but instead worse because it’s almost covert. Here are two reasons why.

One, blackface minstrelsy is never solely about a non-black person painting their face black. Instead, at its core, it’s a performance that projects harmful stereotypes about blackness, especially in front of a white audience for its amusement.

In the mid to late 1800s, entire troupes of black minstrels, though black themselves, were paid to imitate white minstrels’ imitation of blacks, a practice that further solidified negative stereotypes about how blacks look, speak, dance, and carry themselves. And even when minstrel shows became less popular over the first couple of decades of the 20th century, black actors and performers like Bill “Bojangles” Robinson and Eddie Anderson (who played Rochester on Jack Benny’s radio show) could not evade the racist images born on and spread from those earlier stages.

Young’s blackness does not negate his participation in minstrelsy, no matter how proud he is to be a Mummer. Blacks didn’t always have to physically darken their skin with products to participate in blackface minstrelsy. When blacks first became minstrels, having dark skin was sometimes enough. According to historian Ken Padgett, “Blacks were able to participate in minstrel shows only by declaring themselves ‘real coons.’”

As a black person with knowledge of this history, I was taken aback upon seeing the Finnegan group’s skit — Young’s outfit, complete with a gold chain, shiny embellishments and big letters, was an utterly clear link to blackface minstrelsy. Along with face-blackening with shoe polish or burnt cork, exaggerated and buffoonish movements and garish getups were also key elements of minstrel shows. Even Young’s white face paint, which in closeup read “Jay-Z,” communicated from my screen haunting images of minstrels past who painted their mouths in bold red or white. Though the character was meant to represent a real person, it nonetheless presented a stereotype of an uncouth thuggish urban type in oversized clothing — a codified caricature of blackness.

Furthermore, the skit was more cartoonish than the actual cartoon that inspired it. I see nothing wrong with Wilkinson’s editorial cartoon, because the cartoon, unlike another cartoon that recently came under fire for racism, stays away from stereotypical ideas of blackness. Wilkinson could have drawn Jay-Z with big baggy clothes, large jewelry, giants lips and ears — all characteristics that would’ve signified a codified idea of what it means to be a black man. But Wilkinson did not. In the cartoon, Jay-Z appears as a clean-cut character — a depiction, in fact, that serves to reverse stereotypical ideas of what it means to be black. Yet, in bringing the skit to life, the performers did not stick with Wilkinson’s subtlety. 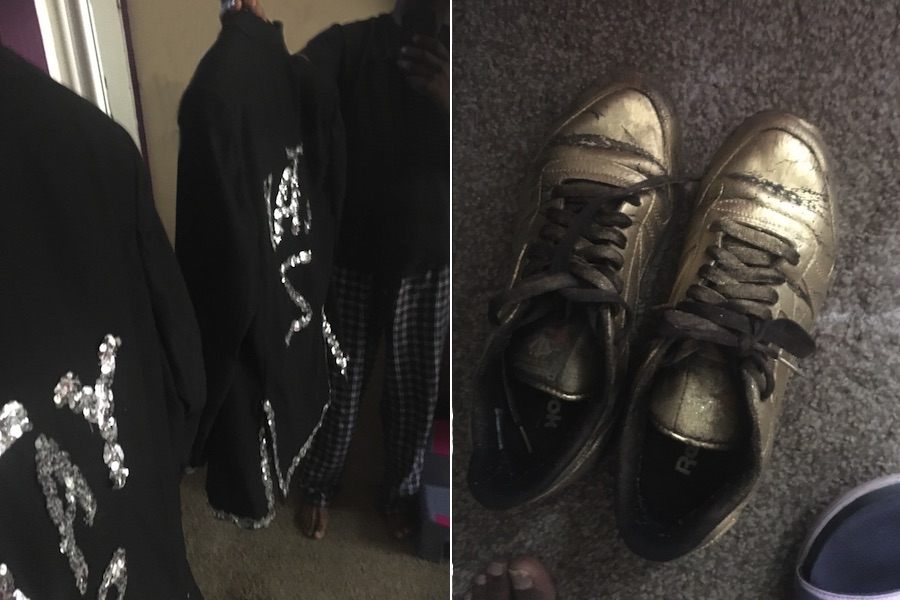 Left: The man who played Jay-Z in the Mummers parade, with the jacket he wore. Right: The shoes he wore.

Second, context matters. We can’t kid ourselves — the Mummers Parade gathers a predominantly white crowd, and remnants of its minstrelsy and long racist past persist. The “Oh! Dem Golden Slippers” Mummers anthem, written by a black man, was apparently a minstrel favorite and introduced to the parade by a minstrel performer. The gold shoes worn by Mummers still today are a nod to the song. This history only heightens the harmfulness of Young’s performance.

Interestingly, the city and media platforms like the Inquirer have chosen to ignore these aspects of the situation. The city has yet to issue a new statement to suggest that it was wrong to approve the Finnegan group’s skit, and on Wednesday afternoon, the Inquirer editorial board released an editorial — “Sloppy facts about Mummer’s Jay-Z skit distract from important conversation” — that focused on Council President Darrell Clarke’s statement condemning the skit.

It’s true that Clarke at first believed that the Jay-Z performer was a non-black person in blackface, but when the performer’s race was revealed, Clarke rightly amended the statement without backing down on the essential point: “People of color know minstrelsy when we see it,” he said.

With the Mummers’ long history of racism, is the best use of our energy to chastise the Council president for feeling triggered and “incorrectly” seeing the skit as blackface? Why did the editorial board choose to go after a black politician who was reacting to a performance that needed to be called out?

And what’s the “important conversation” that the editorial board alludes to in the piece’s headline? That we as a city are too quick to call out racism? “The role of black Mummers and how to make the parade more representative without being exploitative is an important and worthwhile conversation, one that Clarke can and should lead,” the board wrote. The editorial proves we may be quick, but we clearly aren’t serious enough. The board’s hurried solution to this situation is to suggest Clarke take on the role of educating the Mummers, thereby making racism a problem that black people must take the lead on and solve. In reality, the editorial board should be working on confronting racism itself, not on how black people react to it.

The board even linked to a string of thoughts I tweeted on Wednesday about the performance’s air of minstrelsy, but completely blew past the content of the tweets.

Attention, people in 2019: YOU CAN BE A BLACK PERSON AND STILL BE PART OF THE MINSTREL SHOW #MummersParade pic.twitter.com/6VXHx1ERxH

Ultimately, this situation isn’t a case of “Humor Deficiency Disorder” as Wilkinson has defensively called it on Twitter, but a case of being sickened by this country’s undying infatuation with minstrelsy and seeing blackness as buffoonery.