Will Philly Ever Get Its Act Together on Street Sweeping?

New York does it. Boston does it. And yet Philly can’t get this basic urban service right. 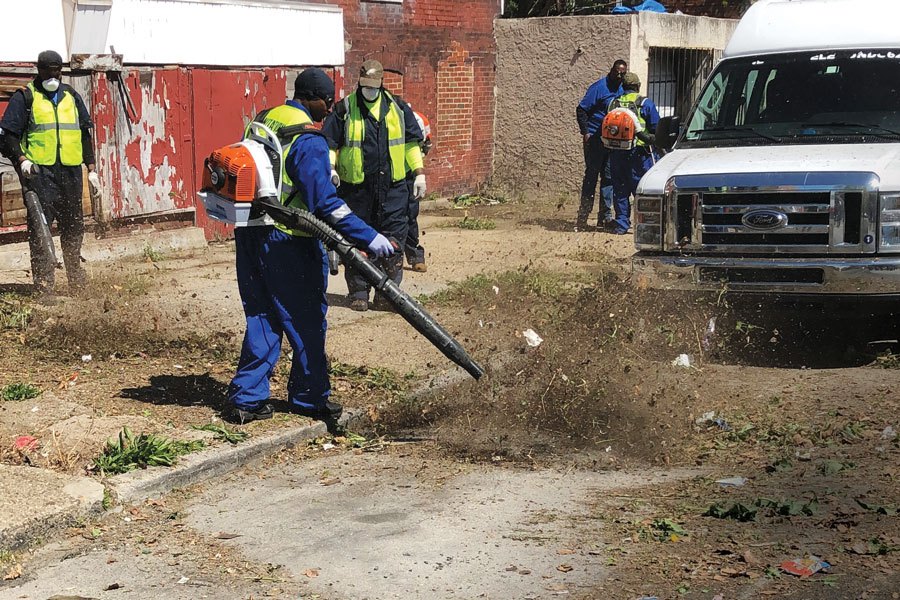 Sometime in the coming weeks, the City of Philadelphia will determine the fate of its desperately needed street-sweeping pilot program, which launched in April and covered six particularly litter-plagued neighborhoods. The pilot was part of Mayor Kenney’s campaign promise to bring back residential street sweeping, which had been a casualty of 2009’s budget cuts and also Philadelphians’ incessant bellyaching about moving their cars for weekly sweepers.

The notion that there’s basically no getting between Philadelphians and their cars has taken firm hold in the past few decades, so it’s no great surprise that in the latest street-sweeping foray, the city didn’t require any car-moving; instead, sanitation workers used, yes, leaf blowers to blast refuse out from under parked cars and into the streets, where a mechanical sweeper sucked it up. Alas, this experiment has had its own issues, including sweepers too wide to fit down some streets, concerns about lead dust, and one particularly horrifying WHYY report concerning airborne syringes and human feces.

While the city mulls the long-term feasibility of the blowers, the more compelling question in my view right now is this: WTF, Philadelphia? Why so many extremely exhausting years of sturm und drang (and trash and work-arounds) when countless other crowded cities — New York! Chicago! Boston! Baltimore! — rely on mechanical sweepers to clean their streets, with their citizens dutifully moving their cars to accommodate them? What is it about us that makes this so hard?

Before we reflexively point back to — sigh — parking, consider Boston, whose auto intensity and narrow streets mirror Philadelphia’s. There, residents have weathered sweeping-related parking restrictions without violent revolution for some 30 years now. “The majority of residents appreciate that their streets are cleaned weekly,” a rep from Boston’s Public Works informs me. In fact, he notes, “Over the years, we’ve added streets to the program based on resident requests.”

Meantime, here in Philly, says Jon Geeting, Philadelphia 3.0 engagement director and street-sweeping advocate, not only has the narrative of can’t-touch-parking-ever been deeply internalized by leaders and citizens (see: median parking, snow savesies, curb hijacking, etc.); there’s also some level of “city officials, feeling hemmed in by the politics, moralizing about how if people would only take care of their own mess, we’d all be fine.” Dena Driscoll, co-chair for the urbanist PAC 5th Square, adds that the ironic bit is that we had sweeping for most of our history. “Sweeping was Ben Franklin’s idea,” she says. “It’s only in our recent memory that all of a sudden we decided we didn’t deserve to have clean streets.”

There are other factors, too, she thinks — for one, a sense of parking-space entitlement emboldened by the city’s super-lax permit and fee structure — but something about the self-image aspect resonates especially strongly, I think. As one former Bostonian I know says: “Obviously, it’s a huge pain having to move your car. But that’s what you sign up for when you live in the big city.”

And there’s the rub: We’re bigger than Boston, but Philadelphians often don’t think of ourselves as “the big city.” It’s actually part of our charm, isn’t it? We’re neighborhood folks, at our core. (Sure, go ahead, park in the median, youse guys!) But when you’ve got 1.5 million neighbors — and 1.5 million neighbors’ detritus junking up the streets — you’re officially a filthy big city in need of filthy-big-city solutions. Hey, good thing those solutions already exist!

The time is clearly now, Philly, to own it and finally get out of our own way. Or, more precisely, out of the street sweeper’s way.

Published as “Sweeping Change!” in the December 2019 issue of Philadelphia magazine.