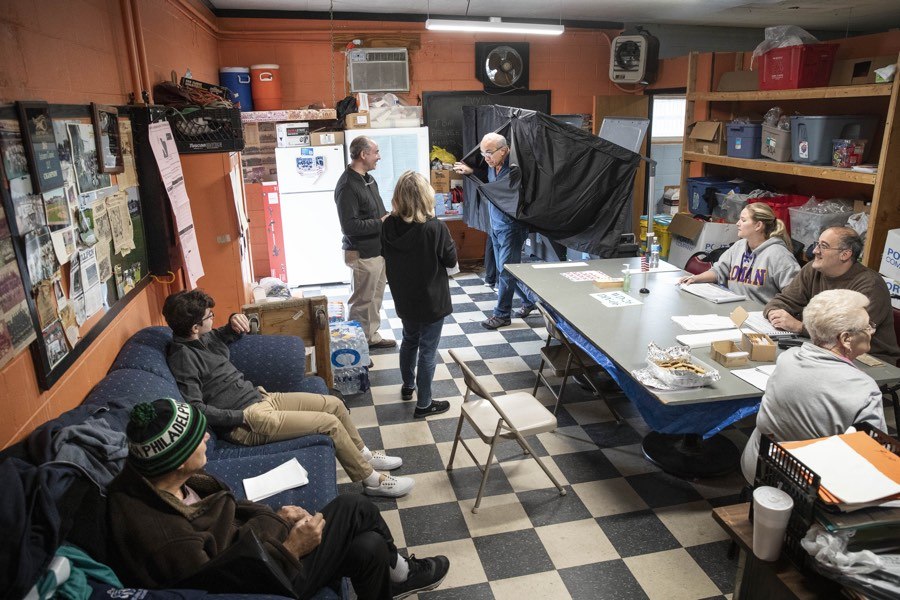 Voters cast their ballots in Philadelphia’s election on Tuesday. Photo by Matt Rourke/AP.

There was really only one burning question during Tuesday’s election: Would the Working Families Party make history by removing Republicans from the two City Council at-large seats they’ve held since 1951? Now we have our answer: Yes and no.

As for the other at-large Council races, the five Democrats on the ballot — Helen Gym, Allan Domb, Isaiah Thomas, Derek Green, and Katherine Gilmore Richardson — were victorious. And in the district Council seats, Democrats Mark Squilla, Kenyatta Johnson, Jamie Gauthier, Curtis Jones, Darrell Clarke, Bobby Henon, Maria Quiñones-Sánchez, Cindy Bass, and Cherelle Parker all were elected. There was just one competitive district race, in which Brian O’Neill fended off a challenge from Democrat Judy Moore to remain the only Republican district Council member.

Here are six other takeaways and lingering questions from Election Day.

Turnout was higher than in years past — ever so slightly.

The reason for the slight uptick? Likely the Working Families Party, which had a strong mobilizing presence — not to mention plenty of money from the national party — to get people excited about the prospects of kicking Republicans off City Council. (Our columnist Ernest Owens has more on how the victory of a third party could alter the landscape of Philly politics.)

Democratic chairman and former U.S. Rep. Bob Brady does not like being crossed. So when a bunch of Democrats — his Democrats! — jumped ship to endorse Kendra Brooks and Nicolas O’Rourke, he seemed to take it as a Brutus-level betrayal. “Why do you want to join our club if you don’t want to follow our rules?” he said in the Inquirer, threatening to expel dissenters from the local party.

Brady’s anger stemmed from the fact that progressive voters would be leaving Democratic candidates in order to vote Working Families. But as Nikil Saval, one of those Democratic ward leaders to rebel and endorse Brooks and O’Rourke, wrote in a Philly Mag op-ed, the math made it all but impossible for Democrats to actually lose enough votes to be put at risk.

Deep down, Brady surely knew this. But this wasn’t about math; it was about who did the endorsing. Far from a low-level mutiny, the group to support the Working Families Party included Helen Gym and state Rep. Chris Rabb. Now that Brady’s Democrats safely got elected, we’ll see whether he keeps his purging promise.

There were historic elections outside Philly city limits last night, too. In Delco, Democrats wrested control of the County Council away from Republicans for the first time since … the Civil War. And Democrat Jack Stollsteimer was elected Delco district attorney.

Those results would seem to bode well for 2020, where support and high turnout among moderate suburban voters will be critical for Democrats hoping to deny Trump another statewide victory. But despite the apparent ample supply of motivation among Democrats, there remain some positive signs for Republicans. A recent New York Times poll of likely 2020 voters found that Trump was one percentage point ahead of both Elizabeth Warren and Bernie Sanders in Pennsylvania. (Trump trailed Biden by three points in the same poll.)

Marsy’s Law passed in Philly. But it’s not law yet.

One of the questions on the ballot in Philly — and across the rest of the state — concerned the crime victims rights legislation known as Marsy’s Law. The proposed law is in fact a constitutional amendment, which is why you were voting on it in the first place. (The state constitution can only be amended after a law is passed in two consecutive legislative sessions, then approved by the voters.)

But while 75 percent of Philly voters said yes to the amendment, the statewide count has been put on hold, thanks to a lawsuit arguing the amendment is unconstitutional. (The amendment would modify multiple parts of the state constitution, which the plaintiffs argue should require multiple, separate voter-approved amendments.)  Until that gets settled, we won’t know the fate of Marsy’s Law.

One might have expected the amendment to fail here in Philly. Groups like the ACLU and the League of Women Voters have criticized the proposal, arguing that its provisions are both redundant and could be weaponized against the wrongly accused. That would seem to be a resonant argument among liberal Philly voters. But if this election is proof of anything, it’s that it’s hard to counteract people’s innate tendency to vote “yes” on ballot questions. Since 2015, voters have said yes to 26 of 27 ballot measures, just as they did here.

Much was made about the new touch screen voting machines making their election debut on Tuesday. Some part of us expected the rollout to go poorly. People don’t always respond well to change, and they’d grown used to the old machines, which have been in use since the early 2000s. But by all accounts, people got the gist of the new tech — and there were only a few reports of imprecise touch screens.

One amusing side-effect: It looks like there were way more write-in votes with the new machines. The 2015 mayoral race, for instance, had just 103 write-ins, compared to 724 this time around. Chalk it up to a user interface that allows a voter to type the name of his or her candidate, rather than having to literally write it in, as with the old machines.

Ciancaglini received 52,000 votes, the most of any Republican candidate for mayor since Sam Katz got 190,000 back in 2003 — the last time there was a truly competitive mayoral contest. Which is to say: Despite racking up a few more votes than usual, Ciancaglini still got walloped by a 160,000-vote margin. As expected.