“I go to Pica’s, I hit Wawa, I murder some Tastykakes,” Fey said when asked what her first stops are when she visits Philadelphia. 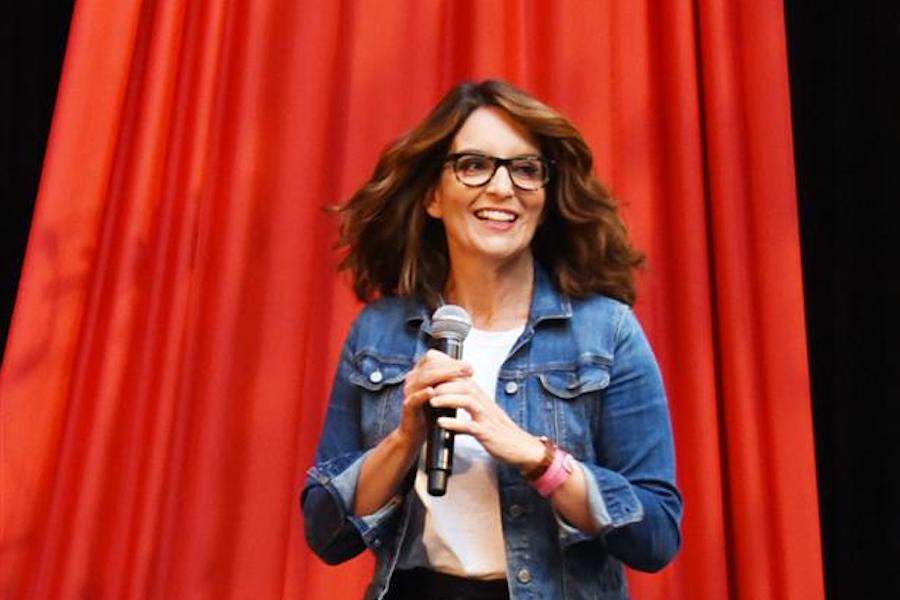 It’s been quite the August in Philly in terms of our encounters with celebrities. Early last week, Washington Square was graced by the Jason Segel, André 3000, Sally Field triumvirate, which was quickly followed by Idris Elba (or, as my wife calls him: yummy) on horseback. And now, we’ve got Tina Fey.

The Upper Darby-bred comic genius (yes, Delco, we realize she’s technically yours, but we’re claiming her) dropped into Philly on Wednesday night. It wasn’t exactly a surprise appearance.

We had heard over the weekend that Fey would giving a free talk at the Kimmel Center on Wednesday, which was, totally non-coincidentally, the same date that tickets were going on sale for Mean Girls, her Broadway musical (based on her 2004 box office hit) that opens at the Academy of Music in November.

Fey talked about the musical and then answered some only-in-Philly type questions, posed by TV journalist Damian Holbrook, who was apparently the inspiration for the “Damian” character in Mean Girls.

Damian asked, “Have you ever double-parked in South Philly?” We’re assuming Holbrook was actually asking Fey if she ever participated in the time-honored tradition of median parking in South Philly. But whatever. Anyway, she said she’s never actually ever driven into the city. We always knew she was smart.

And, because you can’t possibly interview a celebrity in Philly without asking them about cheesesteaks, Holbrook dropped “Pat’s or Geno’s?” on Fey.

She paused momentarily and then chose Pat’s. But then somebody in the audience yelled out “Jim’s!” and Fey quickly corrected herself, choosing Jim’s, which, of course, wasn’t one of the choices. (If you’re wondering if the person who yelled out “Jim’s!” was the publicist for Jim’s, that’s certainly within the realm of possibility, but it’s more likely that it was just a Fey superfan, who has read everything there is to read about Fey, who has previously revealed her affinity for Jim’s.)

She also revealed how her Delco roots helped her become a comedic genius.

“My sense of humor was bred here… I feel like everyone here has a really strong bullshit sensor. It makes for great comedy. It’s definitely informed the writer I am.”

She also keeps to a specific itinerary whenever she arrives in town: “I go to Pica’s, I hit Wawa, I murder some Tastykakes,” she said. (Her favorite Tastykake is the Butterscotch Krimpet. Classic.)

But our selfishly favorite moment — which we unfortunately don’t have on video — was when Fey said that she absolutely loved Gritty’s depiction of her in the currently-on-newsstands Best of Philly issue of Philly Mag.

When she’s not making publicity appearances for Mean Girls, Fey is keeping quite busy.

She and Anne Hathaway are starring in Amazon Prime’s Modern Love, a series is based on the insanely popular New York Times column. That comes out in October.

Fey is also developing a sitcom featuring Ted Danson as a political candidate in Los Angeles. NBC has ordered 13 episodes.

But what we really want to know is: Will Fey make any guest appearances on Saturday Night Live this season? She left the cast in 2006 but has been known to pop up on the show during pivotal political seasons. The next season of SNL debuts at the end of September.