The No-B.S. Guide to Philadelphia Sinkholes

Since 2015, the Streets Department has received more than 17,000 reports of sinkholes in Philly. Here’s a mini-lesson on why that is — and what to do if one starts opening on your street. 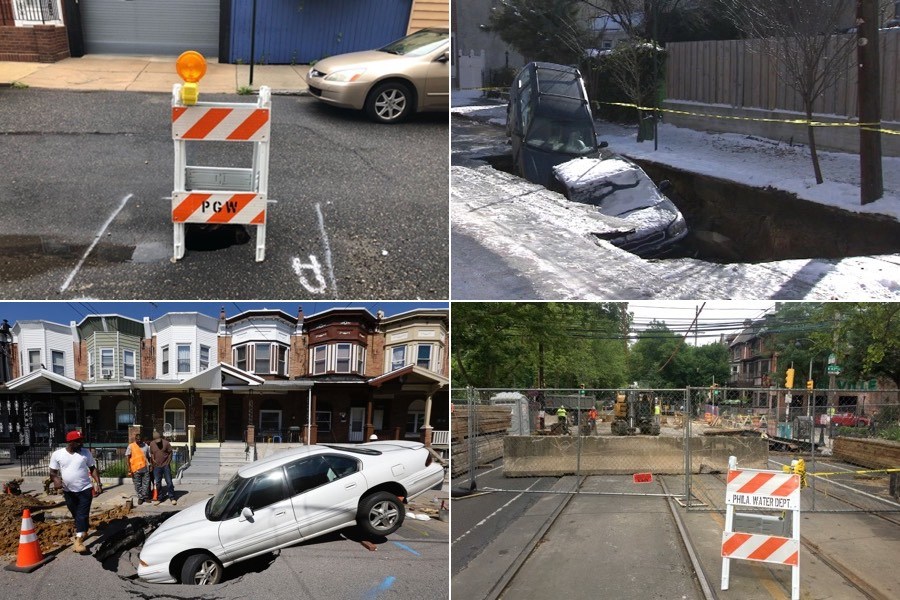 Have you ever really stopped to consider what an act of faith it is to simply take a step on the earth? It’s an ominous thought, but there’s really no guarantee that the ground beneath you is solid. The earth has many mysterious, internal geologic gears, and occasionally those forces can conspire to open up a gaping, seemingly impossible hole in the ground: otherwise known as a sinkhole.

Sounds overdramatic? Take it from the July 6, 1952, issue of the Inquirer, then: “Leonard Yachuczek, 25, the former marine, was walking knee deep in the Toms River, police said, when he stepped into a sinkhole and disappeared.”

Or just ask this truck:

The most #Philly thing I can think of:
– Streets Dept. lets huge sinkhole form for months
– City finally sends truck to fix
– Truck falls into another sinkhole while on way to original
– Truck empties asphalt, seeping into neighbors' basements
– Neighbors are back to square one. pic.twitter.com/ul8pyZXUO5

The revelation of our collective unfirm footing can be … earth-shattering. Perhaps you now understand why, then, a recent sinkhole at 43rd and Baltimore in West Philly drove residents to make offerings to the void as if it were an all-powerful deity. Who could blame them?

How much do you really know about sinkholes, though? We’d forgive you if the answer is very little. The Pennsylvania Department of Environmental Protection states on its very own website, “There are almost no popular books on sinkholes sold at retail bookstores.” But that’s what we are here for.

Philadelphia, at one point in time, had many more visible bodies of water than just the Schuylkill and the Delaware. In the 1800s, the city, needing a solution to the problem of waste disposal, undertook a massive sewer-building project. The idea was to construct sewers around the many existing streams and rivers. “The logic,” says Ben Jewell of the Philadelphia Water Department, “is that you can take advantage of gravity and the grade of existing stream beds to minimize cost of construction.” Engineers dug into the ground to construct these sewers, lined them with bricks, then buried them yet again as they built a new ground level above them. 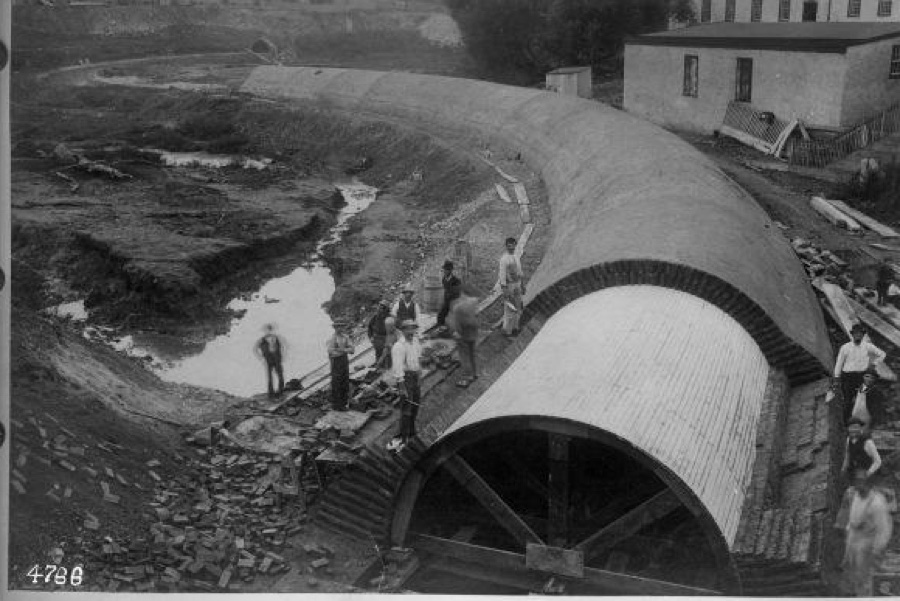 Construction on the Mill Creek Sewer in the 1800s, which now sits 20 feet below the street level in West Philly. Photo via PhillyHistory.org, a project of the Philadelphia Department of Records.

But this produced an environment ripe for cave-ins and sinkholes. Take, for instance, the Mill Creek Sewer in West Philadelphia, along which sinkholes have been occurring for well over a century.

An article from the October 28, 1874, issue of the Inquirer reported an “inquest in the case of the parties killed by the caving in of the Mill Creek Sewer, at 43rd and Chestnut streets.”

An article from the July 19, 1961, Inquirer: “The bodies of a boy and a middle-aged woman were recovered Tuesday from a West Philadelphia cave-in where the spreading menace of further collapse caused the evacuation of … additional homes built over the course of the treacherous Mill Creek Sewer.”

And now fast-forward to the most recent Baltimore Avenue sinkhole: that, too, was caused by a failure of an offshoot sewer connecting to the very same Mill Creek Sewer. 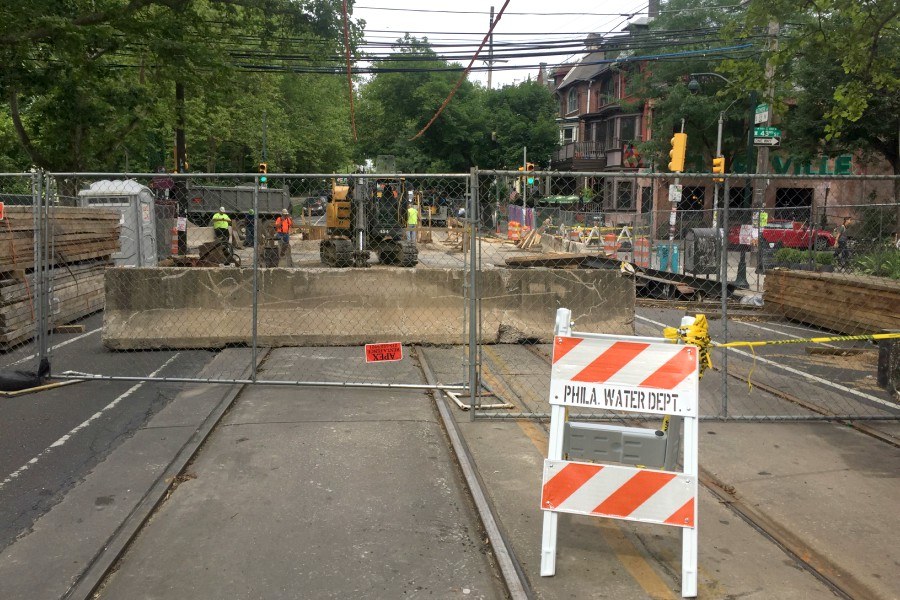 The aftermath of the sinkhole at 43rd and Baltimore. Photo by Claire Sasko.

The Science Behind Sinkholes

Sinkholes occur in both rural and urban environments. Pennsylvania has the good fortune of experiencing both. The rural variety is typically a result of our region’s geology: Much of the bedrock in Pennsylvania is limestone, which can slowly corrode when it comes into contact with carbonic acid — rainwater mixed with carbon dioxide. Over time that corrosion produces holes in the bedrock, which then slowly get filled by the soil above; once the soil closest to the surface begins to travel down toward the holes in the bedrock, a sinkhole is born.

But that’s not really the mechanism that creates sinkholes in Philly. Instead, ours are born of human development: utility lines, stormwater drains, sewage lines — all the subterranean arteries that help make a city inhabitable.

Typically, what happens is the following: Water mains and drains develop leaks over decades, and water begins to seep out into the ground. Then the familiar process begins: Water moves the soil, and gravity drives it downward.

Or, as Mark Waas, the director of field operations at the Water Department, describes it: “Soil movement from either rainwater washing through cracks in paving, or from a water leak on service line, takes soil away. As soil erodes, a void in the street occurs.”

That void in the street, if it’s just a small hole, can be misleading. Sometimes, the soil has eroded well beneath and beyond the visible hole, which is why a seemingly small sinkhole can turn into something much larger — especially if you add weight to it in the form of a car. Even a curious human could be heavy enough to break through the ground. “If you’ve got six inches of asphalt with nothing under it and the edges already crumbling,” says Pennsylvania Geological Survey scientist Helen Delano, “that could be enough.” 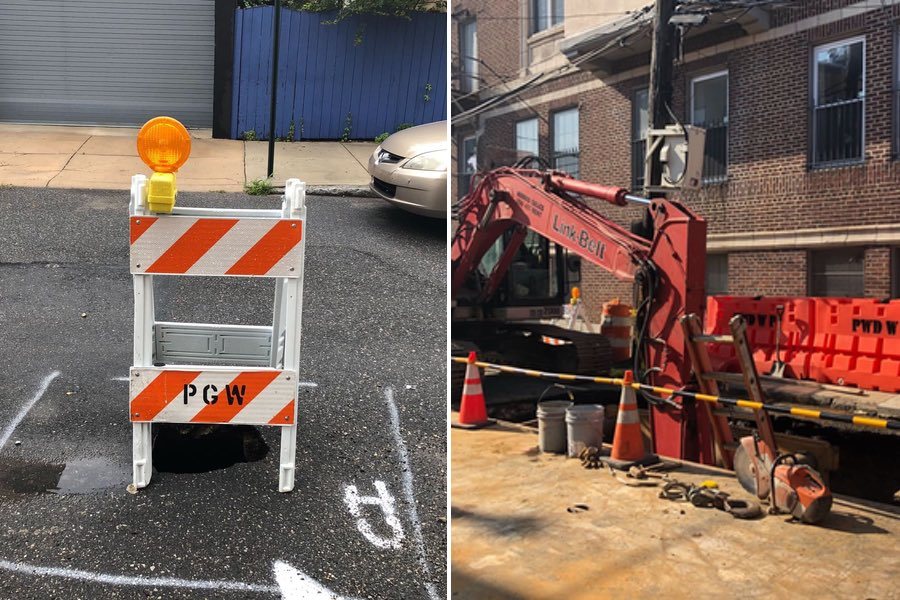 A sinkhole, before and during repair. Photos by Caroline Cunningham.

Excessive rain can produce a sinkhole, too, which is moderately concerning, considering our increasingly frequent waterlogged days. The challenge here is that rainwater, usually meant to run off the streets into below-ground drains, can occasionally slip through cracks in the street and filter directly into the ground. “That’s why the Streets Department seals cracks in the street, and when they pave they’ll seal joints along curb lines,” says Waas. ” We want to make sure water runs off to drains in the streets.”  When it doesn’t, though, the water facilitates the same soil displacement process that is the common denominator with all sinkholes, urban or otherwise.

According to the city’s own estimates, the Water Department operates some 3,200 total miles of shared water mains, many of which were first installed in the 1800s and remain active today. A full 17 percent of the department’s sewer mains are from the 19th century, while 15 percent of water mains and 3.5 percent of storm sewers, respectively, are from the same period.

The pipes — many of which were built of cast iron — have held up considerably well over the hundred-plus years they’ve been in use, but the Water Department says they’re now reaching the end of their lifespan. The challenge, then, is to get to them before they burst or produce a sinkhole.

That’s a tall order, though, considering the knot of different utility and water and sewer lines beneath the ground. As Delano, from the state geological survey, explains: “There have been drains, and transportation routes, and foundations, and things moved, and streets shoved over and put on top of old house foundations, and cisterns, and wells — Lord knows the underground patterns of soil is so complicated that it’s very hard to predict how something’s going to move underground.”

Fortunately, the Water Department has a considerable budget to that end. The department has allocated a total of $200 million over the next five years for sewer reconstruction, along with an additional annual commitment of $16.5 million for regular maintenance on the system. (The department’s total budget in the last fiscal year reached nearly $420 million.)

But despite the department’s best efforts, the fact remains that sinkholes are a relatively common part of the landscape in Philly. If you ever happen to encounter one yourself, you should report it, no matter the size. You can do that by calling 311, contacting the Water Department, or by submitting an online 311 claim here. (There’s no “sinkhole” category through 311, but you can use the one for “pothole.”)

It’s more common than you might think: The Streets Department says that since 2015, a total of 17,682 sinkholes have been reported.

Let that sink in.