It Seems NOAA Wasn’t Kidding About Those Philly Flood Predictions

The government weather-watcher has warned of frequent flooding in Philly by 2050. Thursday’s storm gave us a taste of what’s to come. 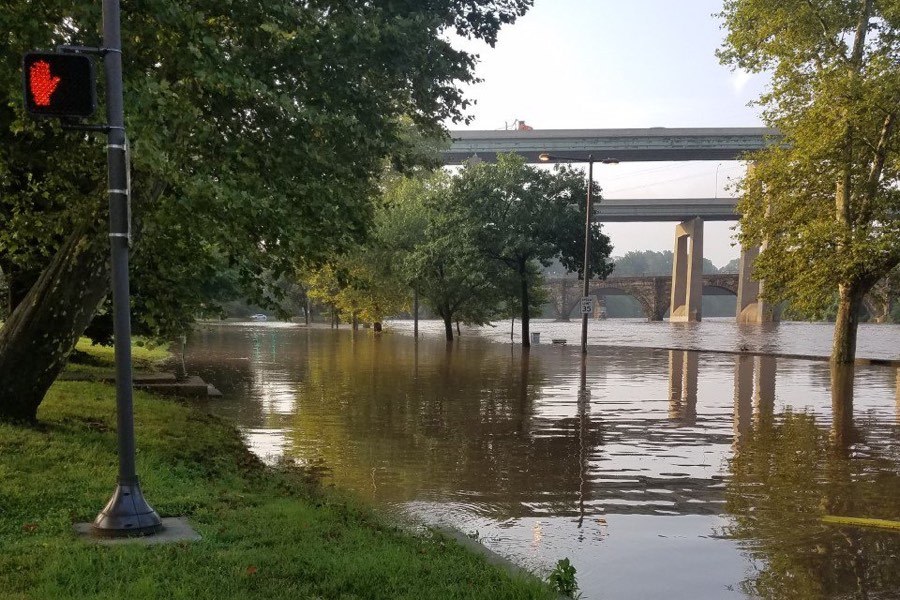 Usually, this is a stretch of Kelly Drive. On Friday morning, it was an extension of the Schuylkill. Photo courtesy of Philadelphia Office of Emergency Management.

On Thursday, we told you about a disconcerting report from the National Oceanic and Atmospheric Administration predicting that Philadelphia — and Shore towns like Atlantic City and Cape May — could see a huge increase in annual flood days by the year 2050. (You can read about that here.)

Well, we didn’t have to wait long to catch a glimpse of our waterlogged future, because the very same day, a storm came and Philly flooded. Water broke into buildings and turned roads into rivers.

The scene in Center City was relatively tame by comparison:

The suburbs weren’t spared from the drenching:

This flooding, as you can quite clearly see, is produced by extreme amounts of rainfall. But that’s not the only way in which a city can become inundated. In fact, the recent NOAA report focuses on an entirely different variety of deluge: high-tide flooding. This sort of flood occurs simply due to rising tide levels — which affects rivers, too —  meaning it can happen on a seemingly clear day. The current all-time record for number of high-tide flood days in Philly is just 12; but by 2030, NOAA estimates, that figure could rise to 30 — and by 2050, it could surpass 100 days.

Aside from the very evident property damage issues — about $90 million worth of property is destroyed per year in Pennsylvania from floods — there’s an environmental cost, too. Heavy rains can cause the sewer systems to overflow, which leads to a bunch of untreated sewage flowing into the river. (Schuylkill punch this is not.)

And of course there is simply the inconvenience factor. On Friday morning, a stretch of Kelly Drive was closed and completely submerged underwater. Previous floods, meanwhile, have forced stretches of MLK Drive to shut down, too.

So far this year, the National Weather Service has issued 10 flood warnings for Philadelphia, six of which were for flash floods. It used to be the case, remember, that situating a city between rivers was actually a good thing. Human civilization was birthed in Mesopotamia — which literally means “between two rivers” — after all. So much for that.