Atlantic City, Cape May Could Flood More Than 100 Days a Year by 2050, Says NOAA

Even Philly is looking at a minimum of 30 days a year of “high-tide flooding,” the government’s weather experts predict. 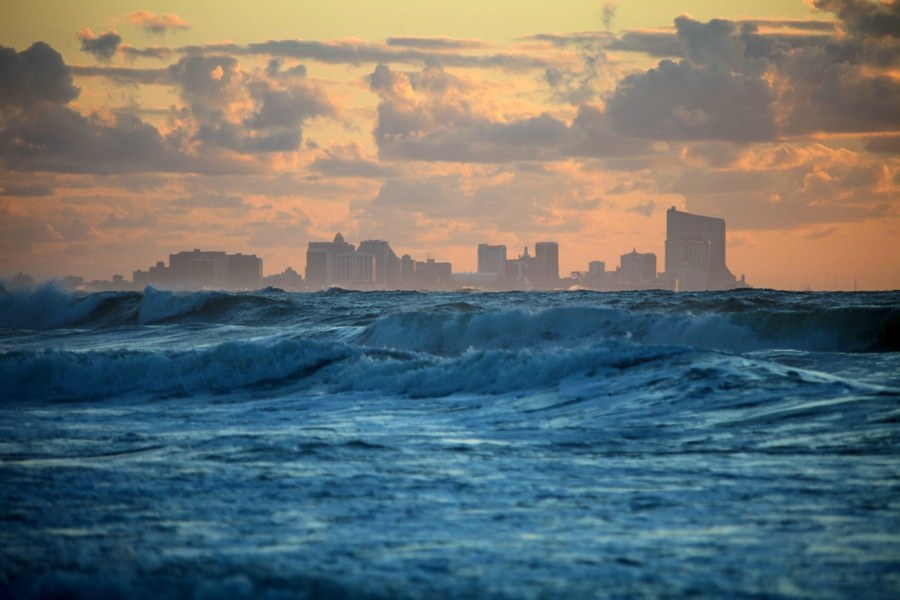 A view of Atlantic city from the sea. Photo by Creative-Family/Getty Images.

You’re used to it by now: Your phone springing to life — sometimes in the middle of the night – to warn you about a severe weather alert for flash flooding, or maybe even a tornado. At times, it can feel like there’s an unceasing, torrential bombardment of weather warnings. And it’s only going to get worse.

A new report from the National Oceanic and Atmospheric Administration confirms as much: Shore towns like Atlantic City and Cape May are due to experience a significant increase in the number of flood days by the year 2050 — and Philadelphia is going to see its own increase.

The culprit is “high-tide flooding,” an especially troubling phenomenon because it doesn’t even have to be precipitated by, well, precipitation. “Flooding that decades ago usually happened only during a powerful or localized storm can now happen when a steady breeze or a change in coastal current overlaps with a high tide,” NOAA writes. Indeed, high-tide flooding is already occurring at a rate double that of 30 years ago.

Last year, Philly experienced eight days of high-tide flooding, down from the all-time record of 12 days. But even 12 days may start to be below average relatively soon: NOAA estimates that Philly could experience up to 20 days of flooding per year by 2030 — and by 2050, the number could range from 30 to 105 days. (The wide range is based on a scenario in which greenhouse gas emissions decrease significantly — not getting our hopes up — and one in which they stay at their current high levels. Apparently we’re supposed to take solace in the fact that if we get our collective act together when it comes to climate change, we could maybe, just maybe, end up with flooding only 10 percent of the year. Hooray?)

The future is even more fraught in coastal Atlantic City. There, the record number of high-tide flood days is 22. That’s more than quadruple the average from just 20 years ago. Fast-forward to 2030 and there could be lazy rivers — and not the fun kind —  on the casino floor as many as 35 days a year. By 2050, the low estimate is 65 days and the doomsday scenario is a full 155 days per year. (If you’re more of the Cape May type, you should be worried too: There, the NOAA predicts 55 t0 135 flood days by 2050.)

For whatever reason, flooding is like the middle child of severe weather — never getting as much attention as its brothers and sisters like tornadoes and hurricanes. But that’s not to say that floods don’t produce some apocalyptic sights.

Here was Washington, D.C., on Monday:

And remember when the Schuylkill flooded last August?

The concerning thing with each of these photographs is that the flooding wasn’t produced by some extreme meteorological outlier like a hurricane; it’s simply becoming normal now for there to be flood-inducing downpours. The NOAA says that high-tide flooding “typically causes minor and disruptive impacts,” but these frequent fair-weather floods, along with the increasingly severe storm floods, make for an unwelcoming combination. Perhaps that’s why a different report recently claimed A.C. would be almost entirely uninhabitable by the year 2100.

And to think the city was just starting to experience its latest rebirth.