Scenes From the Planned Parenthood Protest in Philadelphia 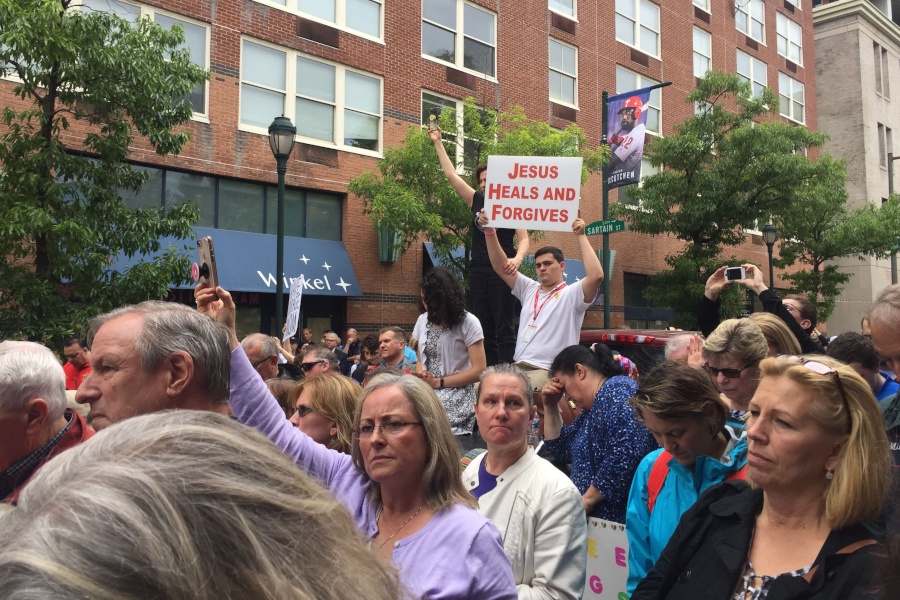 They wanted to stop abortion. And quite a few of them wanted to make America great again, too.

Hundreds of anti-abortion activists swarmed Planned Parenthood at 12th and Locust streets on Friday after a video of a local state representative scolding a protester outside the building went viral earlier this week. 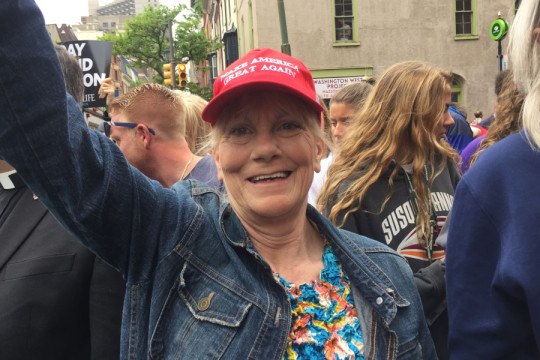 The rally, which began at 11 a.m., temporarily shut down a block of Locust Street. Several prominent anti-abortion activists made speeches, including Abby Johnson, a former Planned Parenthood clinic director; Matt Walsh, of the conservative news site The Daily Wire; and Lila Rose, founder and president of anti-abortion organization Live Action.

Police directed traffic as protesters gathered in the road, many toting homemade signs and American flags, to listen. MAGA hats crowned the heads of white people of various ages. Young women wore bright pink T-shirts that called abortion “ableist, racist, ageist and sexist,” while nearby, a gray-haired couple donned tees that referenced their Christian motorcycle group, reading “Jesus died for bikers too! Pray for the sons of God.”

A self-identified abortion “abolitionist” brandished a massive unborn fetus sign with the words “JESUS CHRIST ENTERED THE WOMB IN ORDER TO REDEEM THE WORLD.” Conservative YouTube blogger John Doyle showed off his shirt, which featured a photo of Brett Kavanaugh and the words “STILL LIKE BEER,” and told me Roe V. Wade should be overturned. 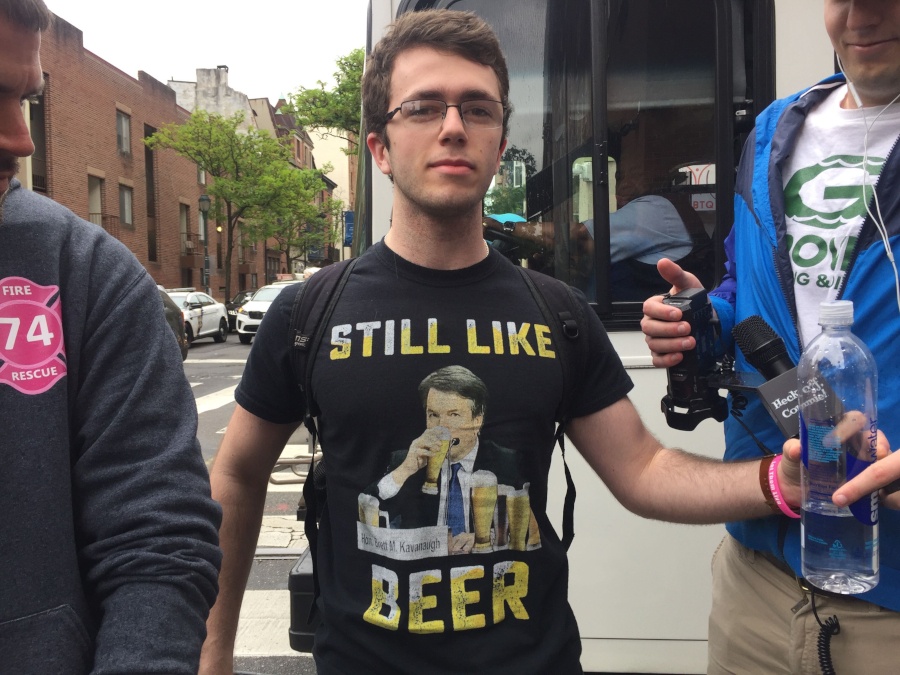 The protesters were there to seize a moment of conservative backlash after Democratic state Rep. Brian Sims (who’s known for his aggressive anti-Trump tactics) filmed and shared a video of himself reprimanding a representative of Sidewalk Servants, a local anti-abortion group whose volunteers protest and pray outside healthcare clinics like Planned Parenthood. Sims’s clip served as fodder for right-wing internet trolls, who cried out against the fact that he called the Sidewalk Servants representative an “old white lady,” as well as against an earlier video in which he asked viewers to identify three teenagers protesting outside Planned Parenthood.

Sidewalk Servants founder and local OB/GYN Monique Ruberu was among those who spoke at the anti-Planned Parenthood rally on Friday. During her speech, Ruberu compared her experiences encountering resistance from abortion-rights activists like Sims to “the #MeToo movement of ‘pro-life.'”

While anti-abortion sentiment hung heavy in the air on Friday, it wasn’t the only reason some people showed up. The rally included more than a few Trump supporters decrying “reverse racism,” angry over Sims’s choice to identify the anti-abortion protester as white. One white woman I passed yelled, “I’m an old white lady, just like the lady who was being harassed,” while a young white man in a MAGA hat, who chose not to identify himself, said “only white people can be berated that way without any repercussions.” 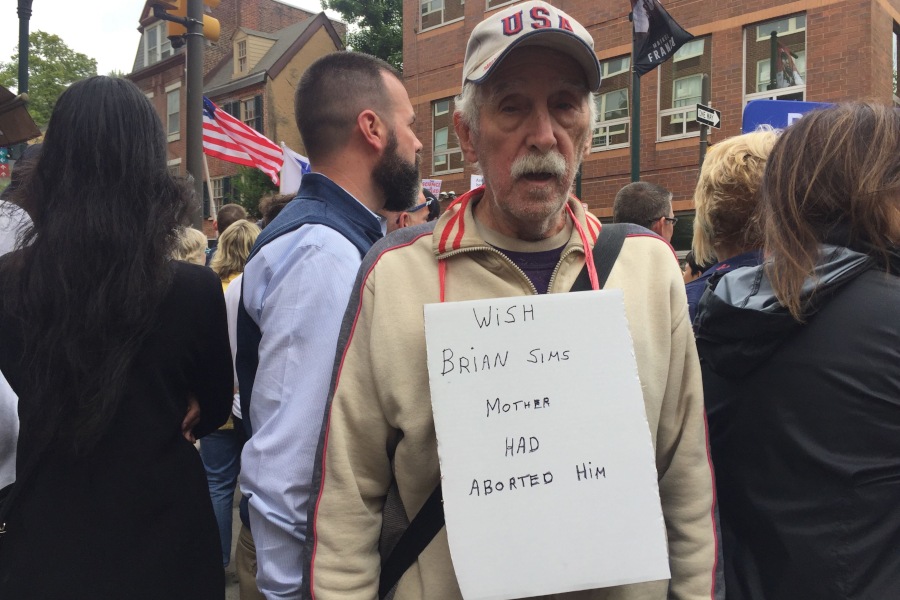 Standing beside him was Graham Allen, from the conservative TV and web show Rant Nation, who said he traveled from Mississippi to attend the protest. Allen said his appearance was “less about Brian Sims.”

“Yeah, his actions were the catalyst, but at the end of the day, we’re here because we care about the unborn,” Allen said.

Throughout the event, police officers and Planned Parenthood volunteers kept open a small walkway along the front of the nonprofit, allowing room for any women attempting to enter or leave the building. 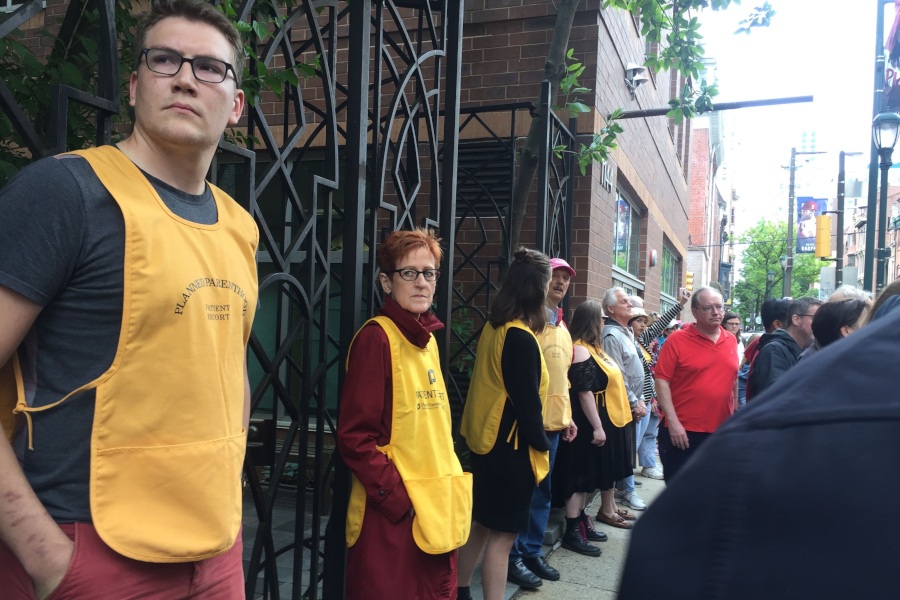 At one point, a young woman covered her face as an escort accompanied her through the crowd to the door of Planned Parenthood. An older woman, who identified herself as an anti-abortion activist, trailed closely behind her, attempting to hand her a small pink bag with three mini Snickers and a handwritten card asking her to call or text the number for the Pro-Life Union of Greater Philadelphia. 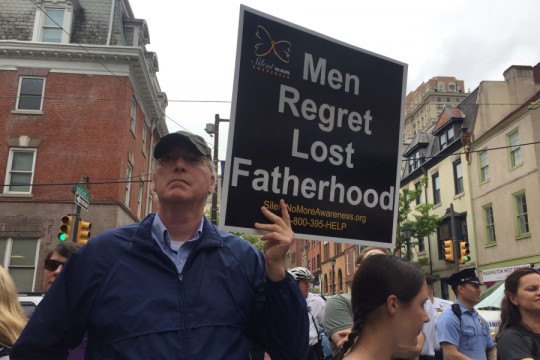 The crowd thinned out a little after the speeches ended at noon. Hardly any counter-protesters attended the event — strange for Philly, but not unexpected, seeing as Planned Parenthood often discourages counter-protesters. The organization maintains that any form of protest outside their health centers can create an “intimidating and disruptive experience” for patients who are “simply trying to access their health care.”

One couple did stand on the fringes of the protest on Friday, however, holding a sign that said “I VOTE 4 BRIAN SIMS.”

The man holding the poster, Terry Roberts, said he and his wife — who stood beside him but did not want to be identified — both live in Sims’s district and came out to support Sims and Planned Parenthood. Roberts’s wife said she didn’t expect the viral videos to affect Sims’s popularity among his constituents.

“Everybody is entitled to say what they say,” she said. “But I suspect there’s no one else here who lives in this district.”