In a now-viral video, the state rep exercises his First Amendment right to go off on a protester exercising hers. 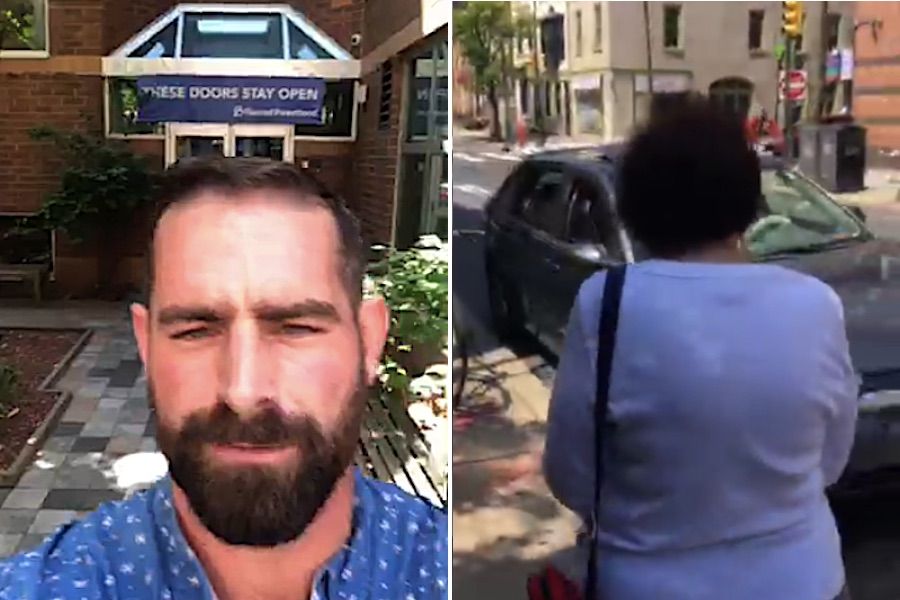 Brian Sims is not a man to just quietly work toward his legislative goals in Harrisburg, where he’s served as a state representative since 2012.

No, Sims is anything but quiet.

OFFICIAL WELCOME: @MikePenceVP let me be the first to officially welcome you to the City of Brotherly Love and to my District! We’re a City of soaring diversity. We believe in the power of all people: Black, Brown, Queer, Trans, Atheist, & Immigrant. So…get bent, then get out! pic.twitter.com/G9eLrXgeVn

And now, Sims is once again garnering lots of viral views, tweets and other forms of Internet attention thanks to a confrontation he instigated on Friday outside Philadelphia’s Planned Parenthood location in Center City.

In a video of the incident, which Sims posted via the live streaming app Periscope and used as an opportunity to raise money for Planned Parenthood, Sims berates an “old white lady,” as he calls her, who was there as a representative of the local pro-life group Sidewalk Servants. (You can watch the full video, which clocks in at more than eight minutes, here.)

“Push back against Planned Parenthood protestors, PLEASE!” writes Sims in a message that accompanies the video. “They prey on young women, they use white privilege, & shame. They’re racist, classist, bigots who NEED & DESERVE our righteous opposition. Push back, please!”

Here are some of the things that Sims says to the woman in the video:

At one point, the unidentified woman tells Sims, “Get your camera out of my face.” Then, after she pulls out a rosary and prays with it, Sims goes after the Catholic church, inaccurately summarizing the recent Pennsylvania grand jury report that indicated that some 300 “predator priests” were credibly accused of sexual abuse.

How many Catholic churches are you protesting after 400 priests in Pennsylvania [were] indicted for child molestation… The amount of mental gymnastics it must take to think that you have a right to tell a woman what’s right for her body and yet you will support a faith that has molested children across the planet? Shame on you.

As of Monday afternoon, the video had topped 500,000 views on Periscope.

We reached out to Sims for comment and to find out what specifically the woman was doing to “shame” people who were walking into Planned Parenthood, and he has yet to respond.

Monique Ruberu, a Philadelphia OB/GYN who runs the Sidewalk Servants program, insists that all participants are trained to avoid shaming Planned Parenthood clients and to simply be there to offer support, prayer and information on alternatives to abortion.

“We’re not trying to be rude or unkind or to shame people or to carry pictures of aborted babies,” Ruberu tells Philly Mag, though she admits that she wasn’t there on Friday and can’t control what her participants do or say. “And in this situation, you have eight minutes of a Pennsylvania legislator harassing a woman. It’s ridiculous.”