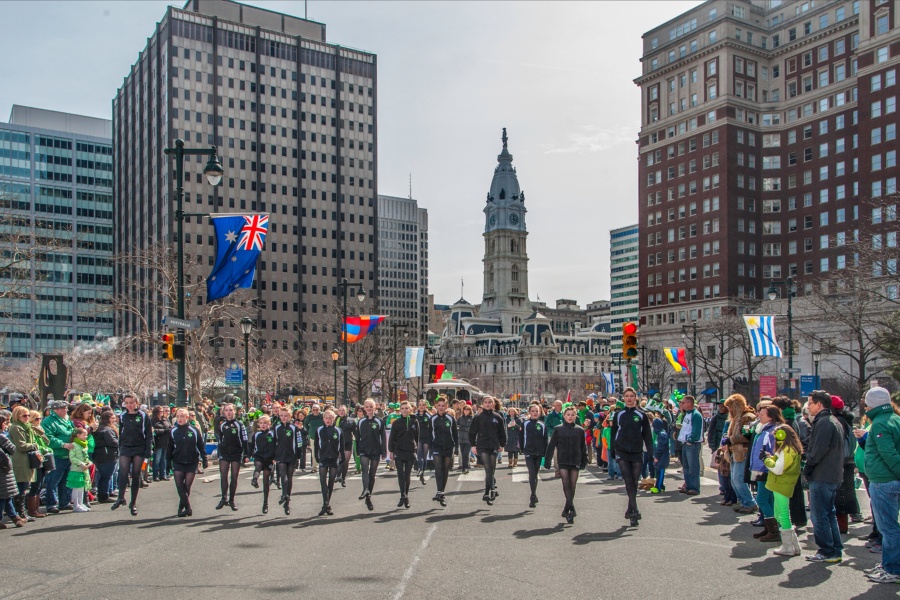 Rain or shine, Philadelphia’s annual St. Patrick’s Day Parade will commence once again this Sunday (a week ahead of the actual holiday). And with it, we’ll see road closures, parking restrictions, bus detours, and more.

In the spirit of keeping things as orderly as possible, we’ve compiled a list of parade logistics for you. Here’s what you need to know about the parade, whether or not you’re attending.

The Route and Theme

The parade is set to begin at 11 a.m. on Sunday. It will start on JFK Boulevard, between 16th and 20th streets, before proceeding east on JFK around the north side of City Hall. From there, the parade will take a left onto Market Street and continue east on Market all the way down to Front Street, where marchers will turn right to head south to Chestnut Street. The parade will end at Penn’s Landing.

All parade participants will assemble on JFK Boulevard between 16th and 20th Street beginning at 9 a.m. The parade is scheduled to end at 3 p.m.

The following roads will be closed between 9 a.m. and approximately 3:30 p.m. on Sunday:

The following roads will be closed between 10 a.m. (or earlier, depending on traffic conditions) and approximately 3:30 p.m. on Sunday:

The following roads will be “Temporary No Parking” zones between 5 a.m. and 3 p.m. on Sunday:

The following road will be a “Temporary No Parking” zones between 6 a.m. and 3 p.m. on Sunday:

Cars parked in these locations during these hours will be towed.

The following items are forbidden along the parade route at any time:

Don’t leave your bags or other items unattended. Also, all bags are are subject to search.

Attendees will not be permitted onto Regional Rail with cups or liquids of any kind.

For tips about being prepared at special events, read the city’s Special Event Safety Guide.

You can find a list of participants and the order in which they will march right here.

You can find a list of parade award categories right here.

The parade will be broadcast live on Fox 29 between noon and 3 p.m. It will also be rebroadcast at the same time on St. Patrick’s Day (March 17th).

As of noon on Wednesday, forecasters say there’s an 80 percent chance of rain on Sunday. But at least the temperature could be relatively balmy: The NWS is predicting a high near 53 degrees Fahrenheit.