This Pakistan-Born, London-Raised City Council Candidate Has a Striking Backstory

Meet political newcomer Hena Veit, whose work in the criminal justice field is inspiring her campaign. 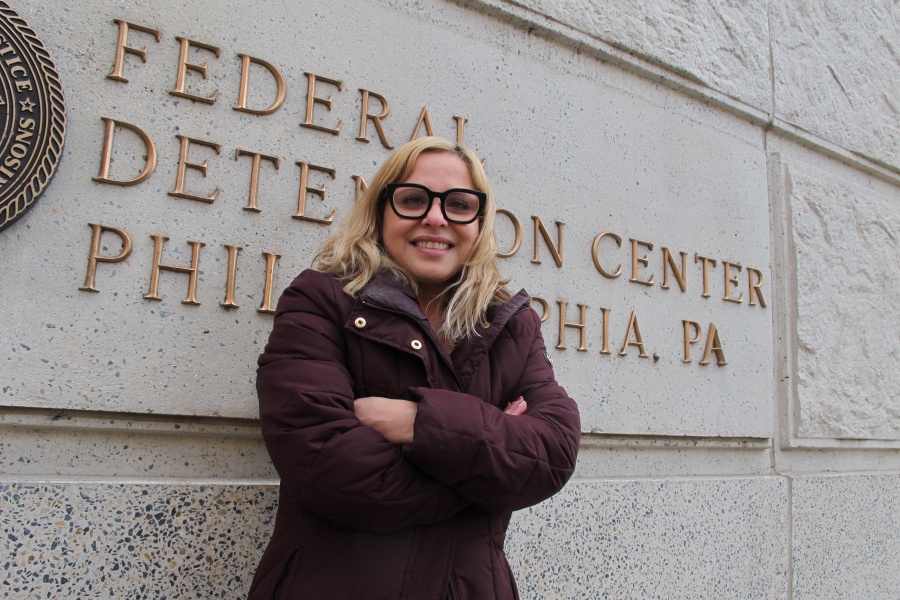 Hena Veit in front of the Federal Detention Center at 7th and Arch streets, where she visits clients. | Photo by Claire Sasko

With roughly two and a half months to go until the May 21st primary election, the race for City Council at-large seats is getting notably crowded. Dozens of Philadelphians are announcing their candidacies, and many of them hope to tap into a voter base that some experts say could be younger and more progressive than ever.

Among those seeking to get their name on the ballot is Hena Veit, a 52-year-old Pakistan-born, London-raised forensic mitigation specialist. Veit joins a list of first-time candidates vying for one of five Council at-large seats reserved for Democrats. At least three incumbent at-large Council members are hoping to keep their seats, so the race will (as usual) be a tough contest for newcomers.

With virtually no political experience, no official campaign website as of Wednesday, and no reality TV following (hey, it’s worked for some people), Veit appears to be an unlikely candidate. But if there’s anything we’ve learned in since 2016, it’s that voters seem eager for fresh new voices ready to challenge the establishment and the status quo.

“I feel like even with her being an unknown, she has a very good shot at this because of her background and what she does for a living, and she has a lot of good ideas,” Montell said. “She is relatively new. But if we get a good ballot position, people will see the work that she does.”

We met with Veit to hear her story, including what her work as a forensic mitigation specialist entails, what made her want to run, and what she hopes to accomplish if she wins.

From Pakistan to Philadelphia

Veit was born in Karachi, Pakistan, in 1967, but her family moved to Southwest London before she turned one. There, her mother, a botany professor, and her father, a Pakistani diplomat, raised her alongside a twin and two older sisters. 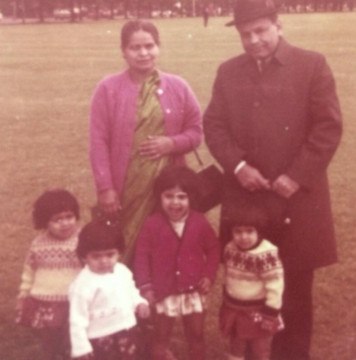 Veit (first on the left) with her three sisters and parents. | Photo courtesy of Hena Veit

Veit’s parents were both Muslim, and she grew up worshiping at a mosque near her home. But she also participated in Christian services every Wednesday through St. Mary’s Church of England, where she and her sisters attended secondary school. Veit said her parents “wanted us to mix with different cultures and different religions. It opened our minds.”

When Veit was 20, her father arranged for her to marry a Pakistan-born British man studying to be a pulmonary specialist. But during the couple’s honeymoon in North West England, her father suffered complications from open-heart surgery. Veit left to return to London, where her father died in the hospital almost immediately after her arrival.

In the following years, Veit and her husband had two children. Around 1996, the small family left London for the U.S., where they eventually settled in Voorhees, New Jersey. Around two years later, Veit’s husband landed a job in Saudi Arabia. Veit said her husband wanted her to move across the world with him — but she chose to stay in New York.

Veit and her husband divorced in 1999, and she remained in Voorhees. Later that year, during a night out in Philly, she met Christopher Veit, the man who would become her second husband. They moved to Franklin Township in Pennsylvania, married, and had two children. But Veit said the relationship eventually led her to the “lowest point” in her life.

According to federal court records, in August 2001 the brands Oakley, Louis Vuitton, and Rolex sued her and Christopher Veit in civil court for trademark infringement, alleging that the couple were selling counterfeit handbags, sunglasses, watches, and other products on the internet. The judge in the joint Oakley and Louis Vuitton suit ultimately ruled that they had engaged in willful trademark infringement, ordered them to pay more than $1.6 million in damages, and enjoined them from infringing on the trademarks ever again. (Court documents with specific findings in the Rolex case, which resulted in an additional $8.5 million judgment, could not be located.)

Additionally, Veit and her husband were each charged in Chester County criminal court with trademark counterfeiting, criminal conspiracy and criminal use of a communication facility — but those charges were dropped in 2002.

Veit has steadfastly maintained her innocence, saying that her husband ran the counterfeiting scheme and she was not involved. “I really didn’t know what he was doing,” Veit said. “He was doing everything behind my back.” (In 2014, Christopher Veit was convicted in an unrelated federal criminal case of trademark counterfeiting, mail fraud, and possession of a firearm by a convicted felon. He was released from prison in 2018.)

Today, Veit says that the lawsuits, among other issues with her husband, forced her to leave home one evening in 2002, feeling it was “too dangerous” to live there. Alone and without a plan, she got in her car and drove — and ended up finding her way to Chicago.

Veit lived in Chicago for several years while her children stayed in Pennsylvania (except for her daughter, who later joined her), during which she experienced on-and-off homelessness. After finding stable housing and landing a managerial job a restaurant, she said, she began earning enough money to attend Argosy University in the city. She graduated with a bachelor’s degree in psychology in 2007.

Shortly after, Veit returned to the Philadelphia area, where she continued to face financial hardships and struggled to find a stable home for a few years. Eventually she found work, and in 2013, she began an online master’s program in forensic psychology through Argosy.

“I wanted to study the criminal mind,” Veit said. “I wanted to understand why someone would hurt someone.”

“I just said, ‘Look, I’ve studied enough to go get a job in my field,’” Veit said. “My passion was to help people.”

Veit visited the Juanita Kidd Stout Center for Criminal Justice in Center City. There, she connected with investigators and attorneys who helped her land her first case as a forensic mitigation specialist.

The Present, and a Platform

The work of a forensic mitigation specialist aligns closely with what is emerging as a larger push for criminal justice reform in both Philadelphia and across the nation, particularly when it comes to reevaluating punitive prison sentences. In her role, Veit works as part of a defense team to examine a defendant’s personal history (via copies of records and extensive interviews with the client, as well as his or her friends, family, and witnesses) in hopes of gathering evidence later used by attorneys in the penalty phase of the trial, if a client is convicted. The evidence Veit gathers is used to explain why a client might have committed a crime, typically in an attempt reduce a sentence or recommend what the defense team sees as a fair penalty.

“You have to look at where someone is coming from,” Veit said of her job. “Was [the crime] intentional or not? What are the chances of the person committing the crime again? The goal is to protect the client and get him the best sentence as possible.”

Veit now runs Delaware Valley Forensic Mitigation Services, through which she specializes in mitigating death penalty, homicide, and federal sentences. She lives in Mayfair. And she’s still one paper short of attaining her master’s degree from Argosy.

“It’s something that I am putting on hold right now,” Veit said. “My focus is on my kids and continuing to work.”

She’s also buckling down on her campaign, which is fueled largely by her work as a mitigation specialist: Veit’s job and the clients she encounters are the driving force behind her decision to run for City Council, she said. Her platform focuses heavily on criminal justice reform.

Veit said that if elected, she would advocate for reducing sentences for nonviolent criminals (plus diversionary programs to keep people out of jail in the first place), as well as work to combat and raise awareness around issues that can lead to incarceration, like poverty and the so-called school-to-prison pipeline. She supports District Attorney Larry Krasner’s decision in 2018 to drop cash bail for most low-level crimes in Philadelphia.

In addition, Veit said she wants to repeal the soda tax, which she said is “regressive” and hurts low-income communities. “There’s no justice in taxing people who can’t afford it,” Veit said.

“I think that’s just a small fix to a bigger problem,” Veit said of safe injection sites. “We need to get to the root of the problem.”

Veit must collect 1,000 signatures supporting her campaign by March 12th to make it onto the primary ballot. A drawing for ballot position for city elective offices will be held on March 20th. Until then, Veit and campaign manager Skip Montell say they’re trying to reach out to as many ward leaders and residents as they can. Veit acknowledged that she’s currently a relatively unknown candidate — but that doesn’t mean anyone should count her out, she says.