Don’t Cry for Nick, Philadelphia. The Truth Is He’ll Never Leave Us.

Nick Foles is officially a free agent, but we will never stop loving our soft-spoken, strong-armed savior. 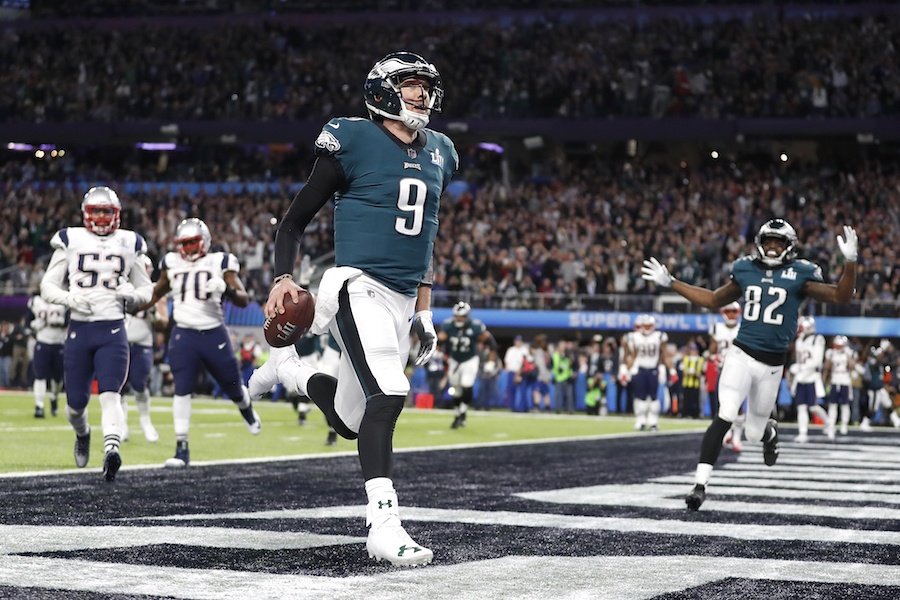 It’s been brewing, the end of Nick Foles in Philadelphia. The weight of two juggernaut quarterbacks on the Eagles roster finally became too much to bear for the franchise. So on Wednesday, the team decided to let Foles walk and become a free agent, in favor of golden boy Carson Wentz.

Foles shepherded the Eagles, and us by proxy, through some of the best sports memories the city’s seen in years. Of course that Super Bowl run reigns supreme. Like the time Foles transmogrified into a Norse God and singlehandedly devoured the Minnesota Vikings.

And then a couple of weeks later, the play that needs no introduction.

That was the moment that gave Foles permanent God status in Philly, the one that birthed a nickname for the ages, and thousands of Not Safe For Work T-shirts.

Of course Foles had produced great moments even before that divine postseason run. He threw seven touchdowns in a game in 2013, tying an NFL record. But Foles soon faltered. A story from 2014 in this magazine questioned his prowess.

And then Foles left us, only to return in 2017 and prove us all wrong. And now he’s leaving again.

Foles’s soon-to-be-former teammates thanked him for leading them to the promised land.

Gonna miss blocking for you 9 – @NickFoles! Good luck! (Except against us!) #phillyspecial #bdn #flyeaglesfly pic.twitter.com/1QSk7bQX72

(Agholor’s tweet doesn’t actually make much sense, if you think about it: If things are earned, not given, then shouldn’t we keep the QB that has actually led the team to a Super Bowl? But I digress.)

Foles also made a fan out of the airport. And many others.

Thank you @NickFoles This image will endure forever among #Eagles fans. You're an outstanding QB and an even better person. We wish you all the best. #FlyEaglesFly pic.twitter.com/0ufXoEM7wn

Farewell Nick Foles. You will always be loved in Philly.

We’ll miss Foles, too. Here’s a limerick to remember him by:

What more can one say about Nick
The Eagles QB of big dick
He o’erjoyed us all
By winning that Bowl
And now that he’s gone, well, we’re sick.

For everything. Thank you. pic.twitter.com/GXS7e0DiaD