A new interactive map makes it a whole lot easier to track permits for construction projects and other road obstacles in the city. 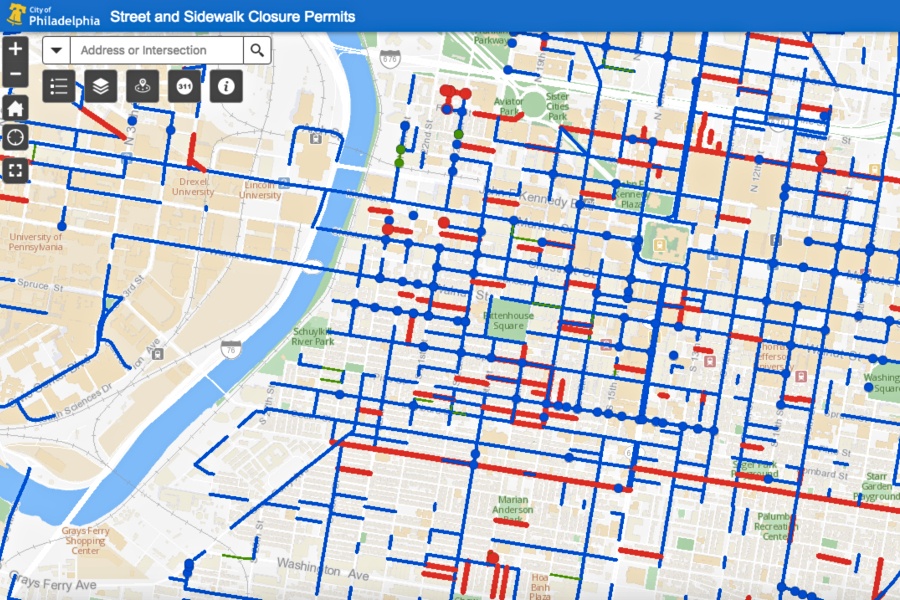 Image via the Streets Department

Pretty much every Philadelphian will tell you the same thing these days: Traffic in the city feels like more of a nightmare than ever. Try to get from Point A to Point B in Philly, and you’ll inevitably find (at least) one of the following: an Uber or Lyft stopped in the street with the hazard lights on; a driver who unsuccessfully tried to rush a yellow light only to block an intersection; a delivery truck unloading in your path; and more. But perhaps the worst offender of all — a sign of our “booming” city, experts say — is construction.

The good news? A brand-new mapping tool from the city’s Streets Department lets residents track any construction project hindering Philly’s roads — and indicates whether that blockage is actually permitted to be there.

The map is updated every 30 minutes, at the top and bottom of every hour. Officials with the Streets Department told the Inquirer (which first reported on the tool) that it covers all street blockages, whether they’re caused by street maintenance, utility work, new construction, or moving trucks. Patrick Iffrig, chief of the Streets Department’s Right of Way Unit, told the newspaper that the tool took three months and $10,000 to create.

You can access the interactive tool right here. You’ll notice (a lot of) blue, red, and green lines on the map: The blue lines indicate partial road closures and the red full closures, and the green means a sidewalk is closed. The tool also allows you to view the permit number for a blockage, as well as the date the permit is effective and the date it expires. Plus, you can view the permit itself. There’s also an option to browse closures going into effect in the near future.

Here’s the best part of the map, in my opinion: It allows you to quickly discover which street blockages are permitted and which are not. You can search for the address or intersection where the obstruction is located, and if you don’t see it logged (or if the permit for the project has expired), you can use the map to submit a right-of-way violation request with 311. (Just look for the 311 logo.)

Previously, the only way to get detailed information on right-of-way permits was to inquire directly with the Streets Department. The tool is a major step in that regard — but it also exposes a few shortcomings insofar as the city’s traffic congestion issues. That includes, most notably, all of the blockages in our streets: Unsurprisingly, almost every road in Center City is colored blue or red.

And then there’s another issue. Officials with the Streets Department confessed to the Inquirer that right-of-way permits are not adequately inspected. Permittees often ignore expiration dates, they said, and with only six inspectors and two supervisors currently assigned to monitor right-of-way permits, you can assume that some violations go unnoticed. Hopefully the map will allow the public to help fix that.

In partnership with the Streets Department, the Bicycle Coalition of Greater Philadelphia has been asking the public to report potentially unapproved street blockages since this past November. Within a month, the organization received reports of three street closures without permits, including two that the Streets Department had been unaware of.

“Un-permitted and problematic closures can create dangerous scenarios for all users, but especially the most vulnerable,” the Bicycle Coalition said in a statement in December. “We encourage people to continue to report problems with sidewalk and bike land closures, as it is working and actions are being taken.”