During contract negotiations in 2015, says NewsGuild leadership, Philadelphia Media Network claimed it was “out of the pension business.” Now, the union says it has proof the publisher of the Inquirer and Philly.com has been funding a pension plan for Teamsters all along. 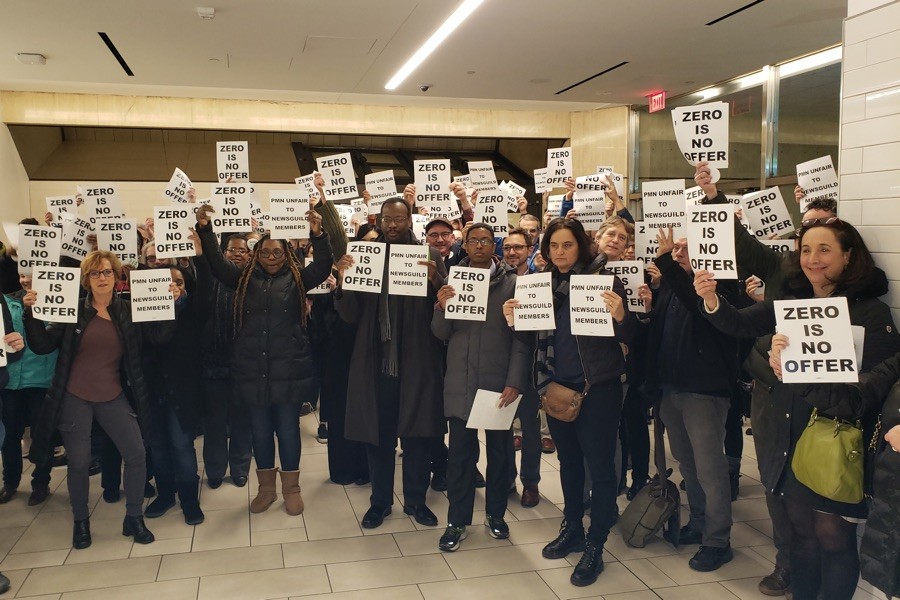 On Wednesday afternoon, leadership of the NewsGuild of Greater Philadelphia — the union that reps nearly 400 employees at PMN, including reporters and editors, photographers, and sales staff — held a rally in the 8th and Market subway concourse to announce a formal complaint it has filed against PMN for misleading the union during past contract negotiations.

Standing by the subway station’s antiseptic white walls, across from a Burlington Coat Factory, NewsGuild president Diane Mastrull, whose day job is writing about business for the Inquirer, spoke to the assembled staff. “They do not deal with us honestly,” she said of company management. “And I am telling you, you all deserve better than that. We would be writing about companies that were doing it to their employees, that were treating them this way.” (Full disclosure: I used to intern at the Inquirer.)

NewsGuild members passed out flyers criticizing management: “PMN Unfair to News Guild Members,” one read. Someone asked if she could post about the meeting and the flyers on social media. Mastrull said yes.

“But do not disparage your company,” reminded NewsGuild executive director Bill Ross.

NewsGuild members are now in a position where they have to straddle a delicate line. Their current contract, due to expire in March 2020, prohibits employees from striking. But Mastrull, gesturing to the flyers, suggested alternative courses of action. “Putting these in your cubicle, going outside for a lunchtime protest, you are protected under the Labor Act to participate in all of that union activity” she said. “Do not fear participation.” 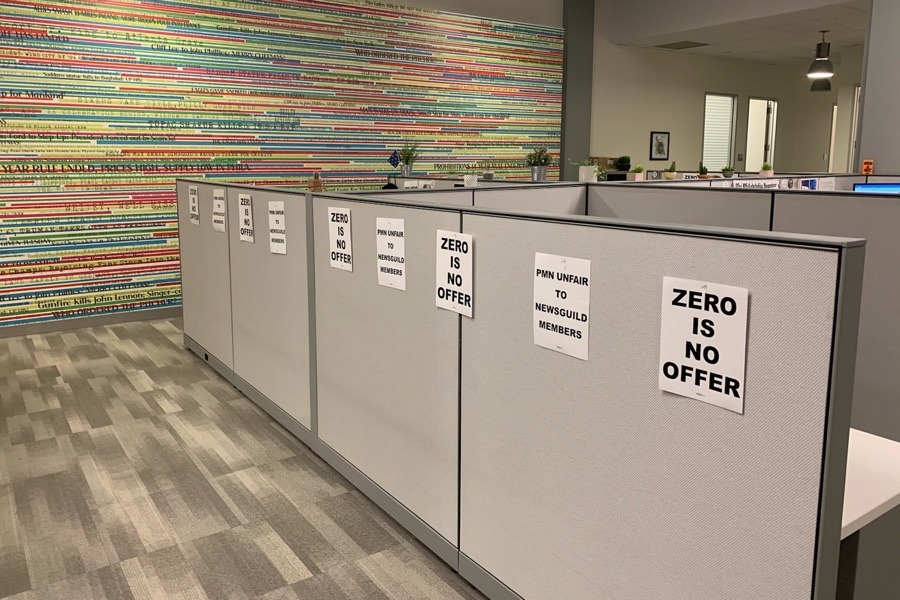 Technically, the union’s complaint is not a new one, but rather a petition to reopen a case that was first filed with the National Labor Relations Board in 2015. That complaint alleged that PMN had engaged in unfair labor practices when it told the union that it would no longer provide pension payments for any employees across the company.

The union had a provision in previous contracts stipulating that PMN had to fund its members’ pension plans at a rate equal to that of other unions. In a contract that was eventually ratified in July 2015, NewsGuild leaders agreed to drop that clause based on the company’s claimed new pension stance.

But the union says it later found out that PMN was in fact still funding pensions for the paper’s delivery drivers, represented by Teamsters Local 628. Only now, with the pension parity provision erased from the contract, the NewsGuild had no recourse.

This was the subject of that 2015 complaint, eventually withdrawn by the union after the NLRB found no substantiating evidence for its claims. But now, NewsGuild leaders say they have a smoking gun: a copy of a provisional 2019 contract with the Teamsters that references pension payments dating to 2015, which the union says proves PMN agreed to fund some employee pensions even as PMN publisher Terry Egger allegedly represented to NewsGuild leadership that the company was “out of the pension business.” Given the new evidence, the Guild has asked the NLRB to reopen the 2015 investigation.

The pension controversy is not the only source of contention between the paper’s staff and management. NewsGuild leaders also say its members haven’t received an across-the-board pay raise in more than a decade. So in October, the union moved to start conversations about a salary bump. Mastrull says Egger, the publisher, appeared receptive at first. But when the two met again this month — Mastrull says Egger had asked for more time to get the money together — she says she discovered that the company had just settled a new contract with the Teamsters, offering benefits like a $1,000 signing bonus for members and continued health coverage with no employee contribution. When it came time for Mastrull to discuss a pay raise for NewsGuild members, she claims Egger said no.

Reached by Philadelphia magazine on Wednesday evening, Egger said he had not yet seen the complaint. He did not provide further comment on either the union’s account of the pension issue or Mastrull’s allegation about the raise request by press time.

That PMN has undergone a series of buyouts and layoffs over the past few years perhaps only adds to the frayed nerves of union members. When it comes to the pension debate, the NewsGuild estimates that PMN has funded roughly $2 million in Teamster pensions; it hopes the NLRB will force PMN to both restore the old pension provision to their contract and pay its members the same $2 million allegedly received by Teamster members. Mastrull hopes the company might also agree to a contract renegotiation immediately, rather than waiting until its expiration next year. But until the NLRB rules, the two sides appear locked in a game of chicken.

“We cannot strike,” Mastrull said, “but we will be making our feelings of disappointment and betrayal known every day from now until this contract expires.”