After Latest Mummers Controversy, Kenney Has to Pick a Side on Racism

From dragging his feet on removing the Rizzo statue to tolerating Mummers Parade antics, the mayor is struggling to appease both sides of a racially divided city. This year, that needs to change. 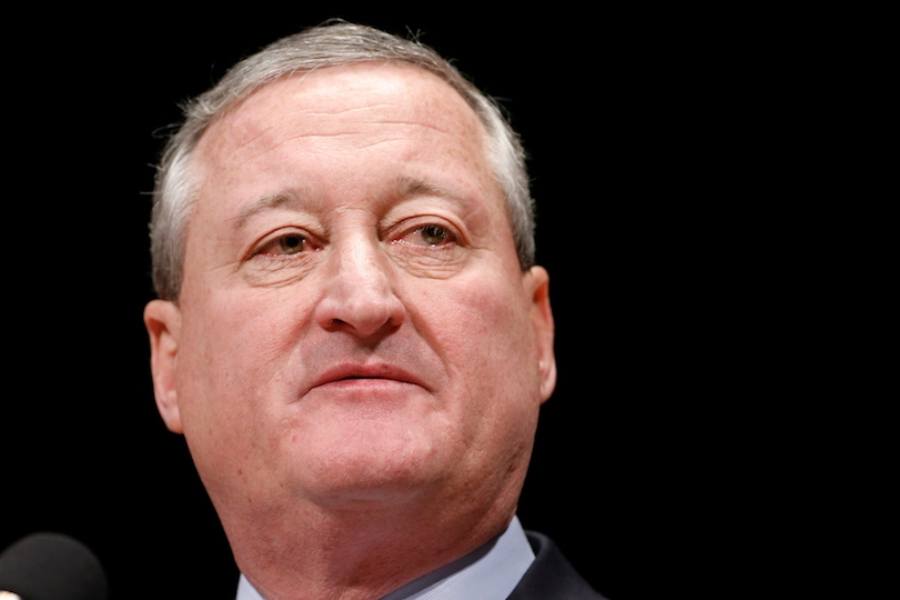 New Year’s Day was confirmation that Philadelphia is still a racist city that revels in its polarization.

The Mummers Parade, the predominantly white cultural phenomenon that has a 118-year history of being racist, sexist, and anti-LGBTQ, continued to offend marginalized groups on Tuesday. After recently instituted guidelines and mandatory sensitivity trainings reiterated the parade’s longstanding ban on performers wearing makeup that makes them look like another race, some performers found a new way to promote old stereotypes of Black people.

Finnegan’s New Year’s Brigade Comic Club put on a skit titled “Humpty Trumpty: Made in America,” featuring a mummer dressed as famed rapper Jay-Z walking a mummer impersonating Mayor Jim Kenney on a leash — a clear shot at the mayor’s flip-flopping on keeping the rapper’s Made in America festival in the city. But unlike previous years in which white mummers used blackface as a form of entertainment, this time they incorporated what some activists termed “blackface by proxy” —  having a Black performer play out the stereotype instead.

Darrel Young, the Black mummer in question, defended his role in the act in a commentary for the Philadelphia Inquirer on Wednesday afternoon as “satirical criticism” that was “absolutely was not racist.” But it should be easy to see how a dark-skinned Black mummer portraying a lighter-complexioned rapper while wearing a big gold chain, oversized jacket, and baggy pants for the amusement of a mainly white crowd could be interpreted as a minstrel performance. (It should also be noted that this was the same brigade that centered its 2016 parade act around mocking transgender advocate Caitlyn Jenner’s transition. In other words, they knew what they were doing.)

According to a statement from the Mayor’s Office, the brigade submitted its concept in advance of the parade, in which the city was informed that “the performer portraying Jay-Z would be an African American male and would not be dressed in blackface.” The statement adds that “the City condemns the use of blackface in any form and will continue to work with the Mummers to ensure future performances are nondiscriminatory.”

City Council president Darrell Clarke, however, released a much-more direct statement: “Whatever the truth is of yesterday’s performance … people of color know minstrelsy when we see it.”

Meanwhile, as the Mummers continued to offend, a “Blue Lives Matter” flag was being tied to the controversial Frank Rizzo statue — where it was later taken down by a City Council candidate who says he did it because he “[doesn’t] support racism.” Although the statue (made in honor of one of the city’s most racist and homophobic mayors) wasn’t on the Mummers Parade route this year, it’s not hard to make a connection.

Both the Mummers Parade and the Rizzo statue relics defended by Philly’s racially segregated neighborhoods, like the one in South Philly that Kenney grew up in. The Mummers Parade isn’t just an annual event, but a political statement. The parade sends the message loud and clear that these individuals hate progressive change and want Philly to return to its old ways. The Rizzo statue will also always serve as a painful reminder to people of color that Philadelphia isn’t completely sold on being the city of brotherly love and sisterly affection to them.

In 2019, the man at the center of this racial divide, Kenney, will have to finally pick a side: Will he continue to pay lip service to marginalized communities, or will he finally put his foot down and make some radical decisions that confront the city’s ongoing racism — and his white, blue-collar supporters?

At this point, it’s obvious that both sides are starting to lose faith in the man who once appeared to be the “Great White Hope” for many. Kenney got elected in 2015 playing both sides of the coin on race. While he made a promise (yet to be fulfilled) that “stop and frisk will end in Philadelphia, no question” during his first mayoral run, Kenney also got the endorsement of the Fraternal Order of the Police (FOP) — a union whose president later referred to Black Lives Matter activists as “a pack of rabid animals.” At a time in which our current DA, Larry Krasner, won his election without an FOP endorsement, it will be interesting to see if Kenney has the moral fiber to sit this one out as well.

But Kenney’s foot-dragging on removing the Rizzo statue until after his reelection campaign suggests that he won’t. “Of all the issues on my scale of important things to do, this is not even in the top 100,” Kenney told Philadelphia Inquirer last summer. But he wasn’t saying that during the height of calls for the statue’s removal a year earlier, when he argued that “now is the right time” to have the discussion. Kenney did a complete 180, and has been doing so for quite some time in an attempt to appease both his white base and Black voters he needs to get him elected again.

And yet, the mayor’s tap-dancing around race has finally caught up to him: Now that the Mummers have chosen to offend yet again, the use of taxpayer dollars to help fund the parade is being called into question. How Kenney, as a former mummer himself, responds to these community concerns will speak volumes.

There will be political blood spilled by Kenney either way. If he acquiesces to the Mummers again, it will suggest that he tolerates racism at the expense of political power. If he sanctions them with a severe penalty, he’ll officially become a traitor to his South Philly base. Are blue-collar white supporters more valuable to him than his Black and brown ones? This year, we will finally know.

Kenney must come to terms with his indecisiveness on addressing racism. As with any white person, he’ll never be an expert on the matter — but nobody ever expected him to be. But while men like Larry Krasner and Donald Trump have each picked a clear side — and have accepted that they’ll make enemies along the way — it’s finally time for Kenney to do the same.

As the saying goes, “a friend to all is a friend to none.” In 2019, we will all know who Kenney’s real friends are. Let’s hope he chooses wisely.