Within a couple of hours of my first bite, I was projectile-vomiting all over the place. 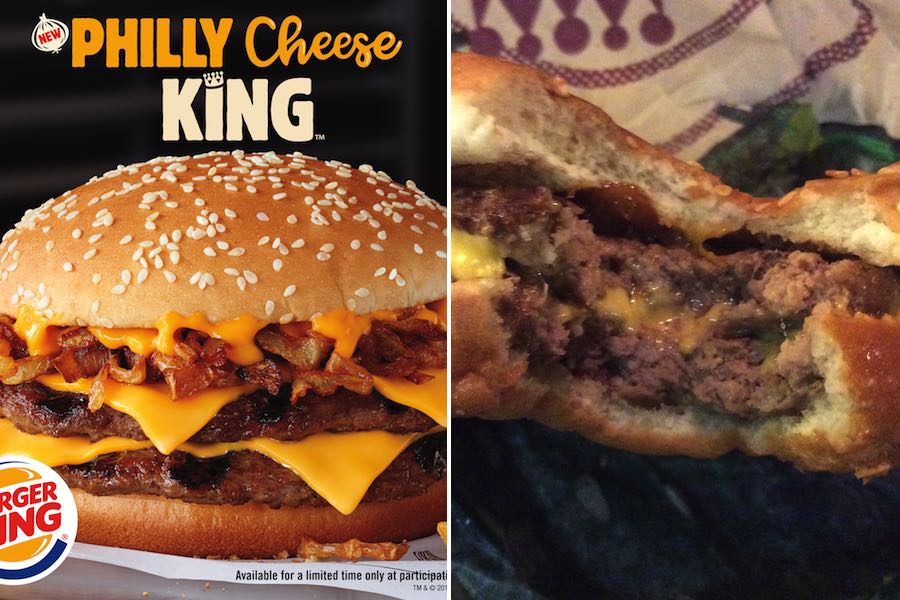 In the last week or so, much has been made of Burger King’s so-called “Philly Cheesesteak Burger,” thanks in part to one Center City Burger King location’s “refusal” to serve the burger. Of course, their refusal is most likely just a publicity stunt to get media outlets to write about the sandwich. (It worked, and even led to coverage on non-Philly sites like Time and Vice.)

But what I wanted to know: just how is the burger? After all, how can a megalithic Florida-based international burger chain with a creepy Howard Eskin-esque mascot just come waltzing into town with a sandwich that doesn’t just exploit the city’s name but also its revered sandwich? We know our cheesesteaks (here are the 30 you need to eat before you die) and something told me that this “flame-grilled” invader deserved no place in our sphere of existence.

And so I went.

I soon regretted it.

First of all, even though media outlets have repeatedly referred to it as “Burger King’s Philly Cheesesteak Burger,” it’s actually not called that. Burger King’s moniker for the sandwich is the Philly Cheese King. It’s an homage, of sorts, to the cheesesteak. As Burger King puts it, the chain is bringing its “flame grilling expertise to the traditional Philly cheesesteak recipe.”

On Wednesday, I headed out to a Burger King near my home to investigate. I went inside to order, and was impressed by the newly renovated interior. Your Burger King of 20 years ago this was not.

I ordered the Philly Cheese King. The recommended price is $5.99. For whatever ungodly reason, the Philly Cheese King that I bought cost $7.39. And that’s without fries and a drink. $7.39!!! That I could get a Wawa Shorti, a small bag of chips and some Wawa iced tea for around the same price did not escape me.

Around five minutes after I swiped my card in the cashier terminal, my sandwich arrived. 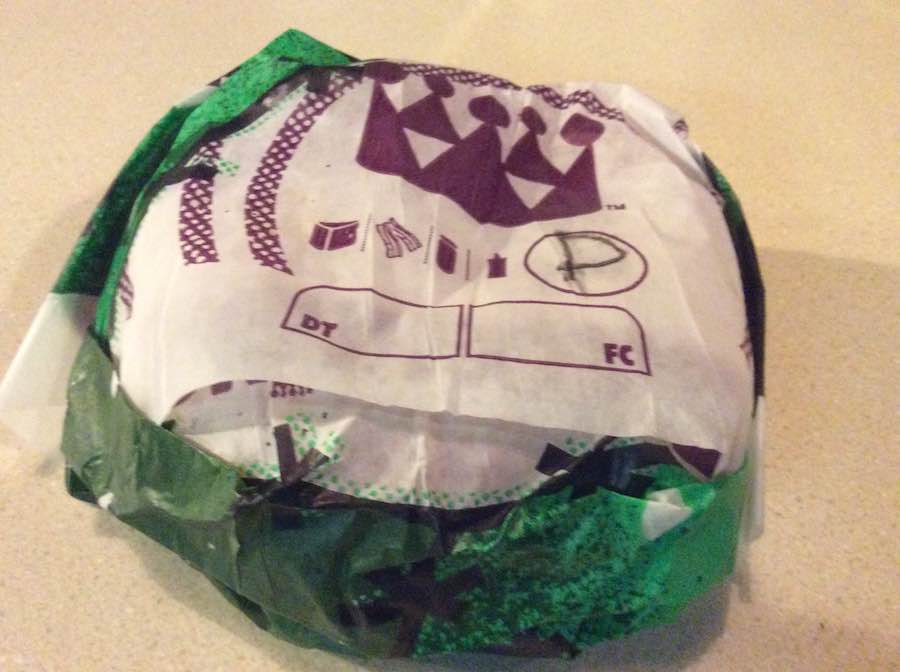 I trepidatiously unwrapped it: 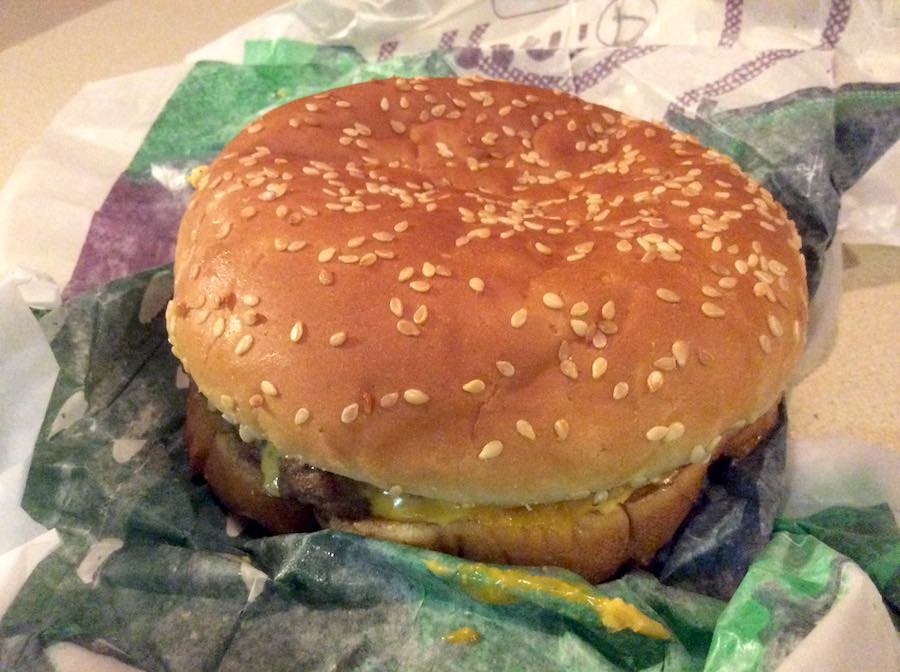 Now, in all fairness to Burger King, I have to say that my body is not accustomed to fast-food meat.

The only chain fast food restaurants I ever visit are McDonald’s (and only for the rare Egg McMuffin while on a road trip) and Chick-fil-A, which I just couldn’t bring myself to boycott, although their decision to remove cole slaw from the menu utterly confounds me.

So, maybe — in the way that a guy who routinely drinks eight shots of Fireball a night can handle it just fine, while somebody not accustomed to that dosage would be laid out flat — maybe my body has just not been properly trained to accept the abomination that Burger King tries to pass off as a sandwich.

Anyway, this is what the Burger King Philly Cheese King looks like when you take off the top bun: 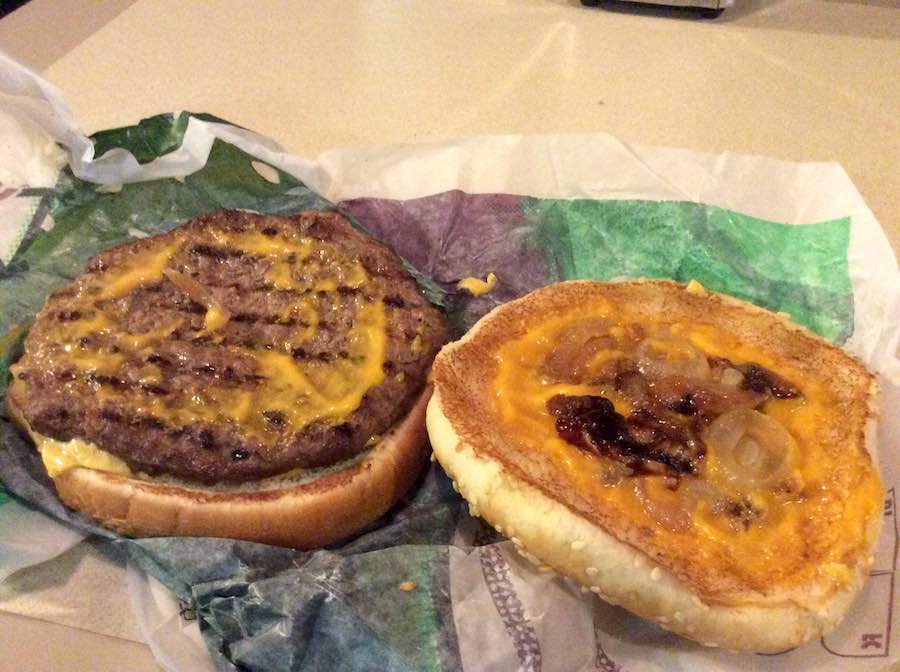 It sure is a shame you can’t smell it, reader.

There are two beef patties (Burger King says that there’s a total of more than a half-pound of “flame-grilled 100% beef” in the sandwich, for those of you of the kind that rave about how huge the portions are at the terrible diner around the corner), some kind of weird cheese sauce, and slimy caramelized onions.

And, in lifting up the top burger patty, we find more of the weird cheese sauce: 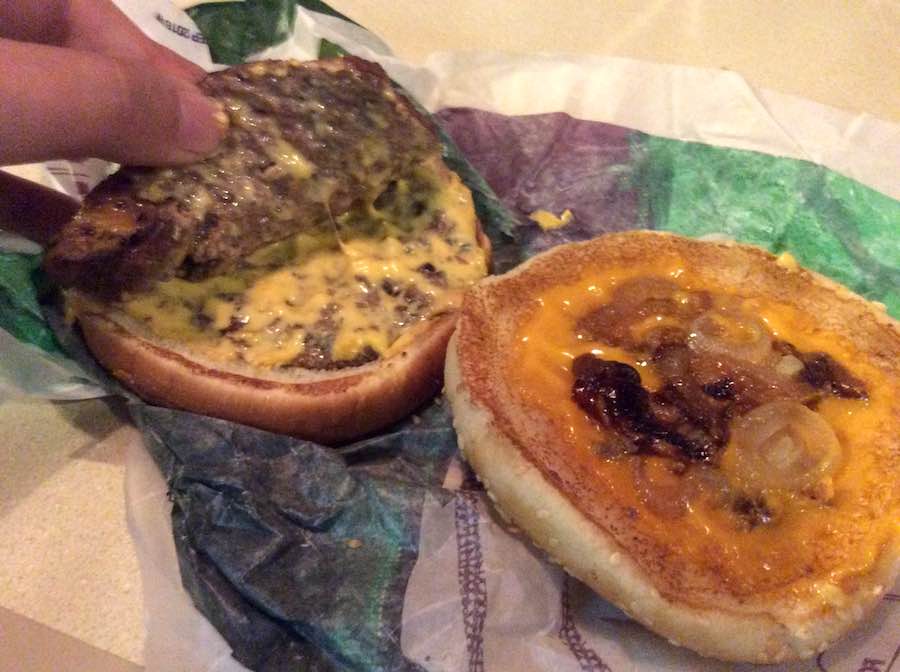 OK, so in point of fact, I actually ordered two Burger King Philly Cheese King sandwiches — one that I could take apart to show it to you in all of its gory glory, and then one that I could eat.

So after I took the above photos, I got rid of the first sandwich, opened the second one, and brought my jaws down upon it: 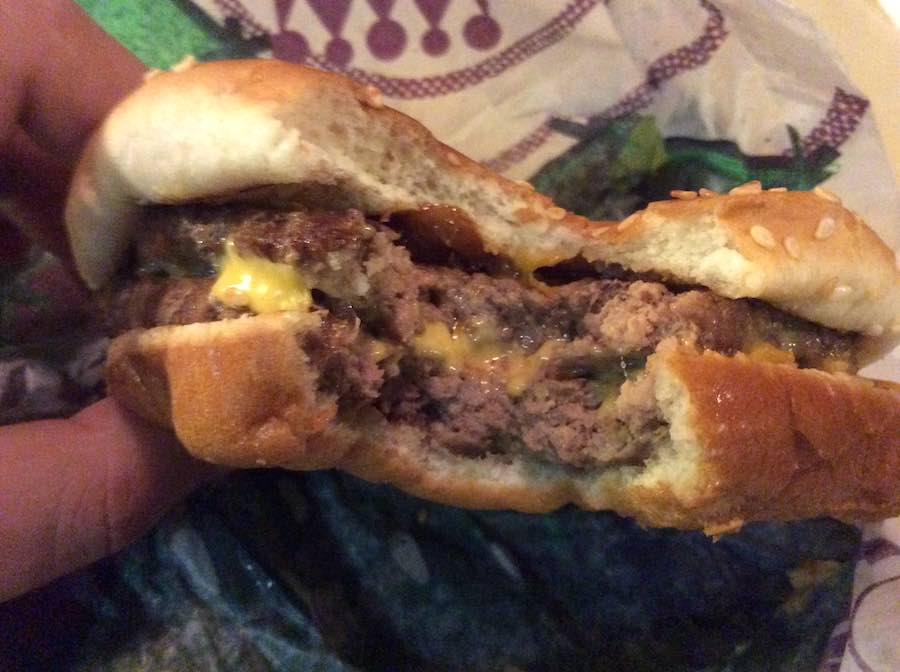 I was immediately struck by the horrible flavor of the beef, which tasted like the worst frozen beef patty that you were ever handed at a kegger or your friend-who-doesn’t-know-good-food’s 4th of July cookout. I recall those days when I first moved out on my own and occasionally called a can of Chef Boyardee beef ravioli dinner. The meat in there was less suspect.

The cheese sauce tasted nothing like the Cheez Whiz that we guiltily eat on cheesesteaks in Philly. It was bland and kind of plasticky. The onions tasted like old grease — and old onions, like when you find that last onion in your pantry and it looks a little sketchy but you use it anyway.

Nevertheless, determined to complete the assignment, I ate more: 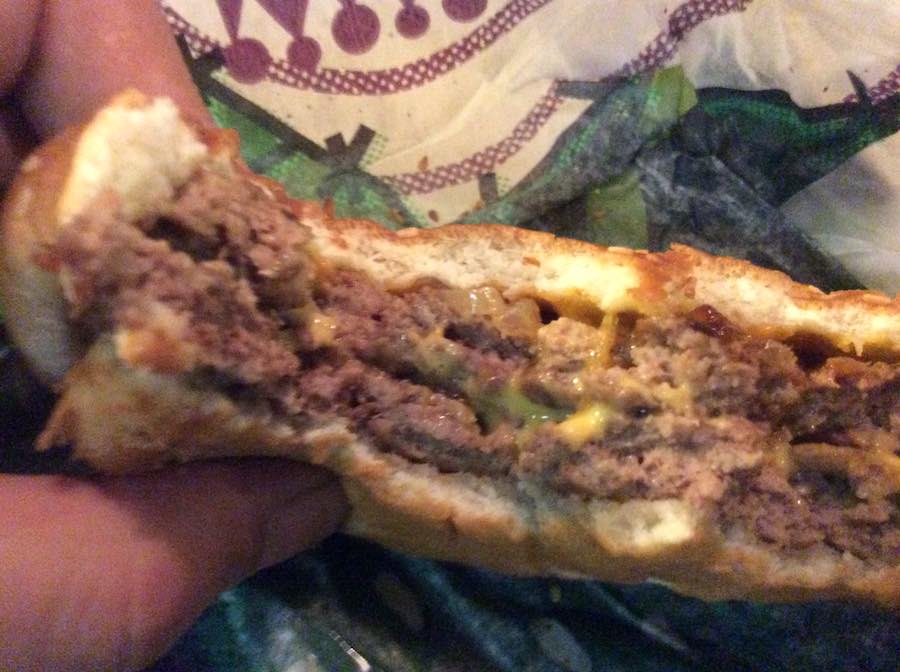 After I swallowed this bite, I wondered if I could finish the burger. I took one more bite. And then I promptly spit it out. I just couldn’t do it. No, not just because there’s something morally wrong with Burger King’s new sandwich, something that cuts right to the core of our identity as Philadelphians.

No. I had to stop because, well, my system had already begun to reject this foreign body.

I actually have a photo of what I spit out, but classy guy that I am, I won’t share that with you (aka my editors think that Philly Mag is too upscale to go around publishing photos of such things. Who knew?).

I also won’t share the photos from about two hours later, when I developed the sudden urge to puke.

Sorry if this is TMI, but I couldn’t even make it to the bathroom.

Before I found the toilet, I projectile vomited all over the place, doing my best to spit out the individual little grains of gray, gristly ground beef that I found lodged in my mouth. Once I fully expelled this factory food from hell, I almost immediately felt relatively normal again.

Now, I can’t possibly say with certainty that this episode was the Burger King Philly Cheese King sandwich’s fault. Food poisoning? Maybe. (How can you really be sure, short of testing?) Again, my digestive system usually only slums as low as Lancaster Brand ground beef at Acme. Fast food meat, not so much.

But I did call one of the region’s leading experts in food-borne illness, Dr. Donald Schaffner from the Department of Food Science at Rutgers University, who previously consulted with us over those cockroaches at Dirty Frank’s.

“You are correct that oftentimes people think that it was the last food they ate that made them sick,” he told me. “Sometimes this is not true. The symptoms that you mention (vomiting), are, however, consistent with emetic toxins produced by Staphylococcus and Bacillus, and these foodborne intoxications do have a short incubation. This means it could be the [Burger King food].”

I dunno. Either way, my advice to you, dear reader, is that you steer clear of the Burger King Philly Cheese King, if only out of principle.