Protests used to be a visible symbol of the resistance. Now they have become a total spectacle of over-the-top political antics and unbridled virtue signaling. 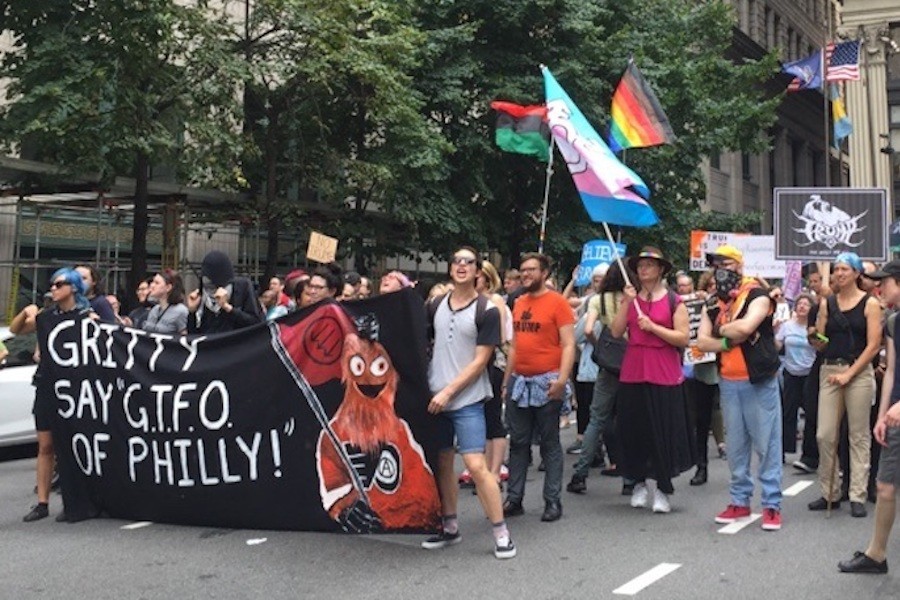 Marchers pausing briefly on the east side of City Hall. | Photo by Claire Sasko

On Tuesday afternoon, hundreds of Philadelphians caused traffic, wore costumes, made lots of noise, and carried colorful signs across Center City. No, it wasn’t a pre-Halloween festival — it was yet another anti-Trump protest.

As the president attended the annual National Electrical Contractors Association gathering at the Pennsylvania Convention Center, large crowds of folks proudly displayed signs that comically mocked the president and showcased their political calls for action. Many even went a step further to invoke Philly’s latest underdog, Gritty:

Trump is speaking at The Philadelphia Convention Center on October 2nd at 1pm. We are converging at 12pm at 12th and Market to let him know that Philly doesn’t want him here! Lets make this time as big as the 2017 republican retreat? • • • • • • • • • • • • Also the person that runs this hates Gritty #abolishice #occupyice #endcollaboration #chingalamigra #shutdownberks #endstopandfrisk #occupyicephl #philly #philadelphia #endpars #grittycity #gritty #expandsanctuary #endfamilydetention

And as expected, the biggest stories to come out of the protest were highlights of who trolled the best — because that’s just how much impact all of this has made.

I’m a huge fan of the First Amendment right to assemble, but even I’ve become exhausted with the direction of the anti-Trump protests in Philly. What could have been a truly significant act of resistance has been co-opted into a mass spectacle of virtue signaling and cringeworthy puns plastered on banners. If this is what the revolution is going to look like, then the revolution will most definitely fail.

I sensed the direction shift this summer when protests for vice president Mike Pence’s back-to-back appearances in Philly became huge productions. Activist groups organized roughly a hundred people to wear Handmaid’s Tale costumes. Paid political organizers were canvassing to get people to vote Democrat. Elected officials took over the stage to pontificate and preach their platforms to crowds. And who can forget this one particular act of political opportunism: Brian Sims and his attention-seeking photoshoot.

These anti-Trump protests have become less about the issues at hand and more about the kind of political grandstanding that exhausts us all. I’ve attended countless protests over the years and have found the most powerful ones to be less manufactured. I’ve personally appreciated when demonstrations were more targeted and organized, and had strategic lists of demands. It’s not about the crowd size. It’s about the message and the real action that follows.

Anti-Trump protests can become polarizing even for liberals like me who feel as though multiple messages are being shoved down my throat at the same time. You have the anti-Fascists, Democratic-Socialists, establishment Democrats, and just about every other flavor of liberal resistance flexing their radicalism. A lot of these public gatherings serve as platform boosters intended to recruit new disciples and reframe the narrative, often echoing the notion of “if you really hate Trump, join us.”

Philly has literally turned these acts of resistance into a party, changing what could be a powerful device —  protest—into a public display of post-election whining. I’ve stopped going to such protests altogether — not because I’ve lost the fight in me to resist the Trump administration, but because I’d rather focus my energy into more tangible direct actions. There are far better things to do with my time than participate in what feels like a live taping of social media political rants.

Often, I find myself fantasizing about how we could better use these large crowds. What if they took the movement to the Philadelphia School District’s headquarters and demanded better for our children? Or what if these mass gatherings flooded City Council every Thursday and held our elected officials accountable for all these damn potholes? Just imagine the endless alternatives that would be so much more effective than taunting a president who gets a kick out of the attention and who has no plans on changing anytime soon.

But this is Philly, a town that prides itself on making a statement. I get that improving public education, fixing potholes, and addressing grave local concerns may not sound as sexy as dressing up in flashy costumes and trolling the President of the United States. But it would at least be helpful to admit that these protests are just a public forum to vent pent-up political frustrations. They’re nothing more.

If I had to express my sentiments via a showy poster, the catchphrase would be “Come for the protest, stay for the laughter.” Because at this point, that’s all you’re going to get right now.